And now, in the second part of this two-part guest post, I will let the words–and the magnificent images–speak for themselves…with one exception.  I can’t help but point out the coincidence that guest writer/photographer Steve Polston chose to include a building that I, too, photographed several years ago.  The second photo that appears on this Part II–the one of the cinder-block building with two small windows–is the front of a building I featured back in 2009, looking more closely at the mural on the building’s side.  With that said, I encourage readers to proceed and to offer feedback.  We both will respond!

Eric said I could take over some of this space to talk about my fine art photography project called “Monuments of the City” because we share an affinity for the city.

We both love cities and the urban environment; he understands it with a sociological bent and knows that trends in how people live, work, shop, play and drive are part and parcel of the city. The operative phrase is “he understands it”. Eric is pretty smart with his observations, and he is a trained urban planner who has made it his life’s work.

Me? I have this feeling when I’m in the cityscape that helps me sense and appreciate things that once were. Photography always has been a medium that longs for the time that passed a moment ago, even when its power for mimesis is so strong that viewers react to a photograph as if they are seeing the actual thing (a pretty bunny rabbit) or actual event (the fox chasing the bunny). We have a visceral response to what we see in photographs, even as if what we see is not what the photograph is.

A photograph is a flat object that communicates. It has a frame. It communicates on a physical level through the print (is the paper shiny, or matte? Is the printing out process from a laser printer or silver gelatin exposed in a darkroom)? And that doesn’t even begin to address how else we experience photography (for instance … right now you are seeing my images backlighted on a computer screen, which was not my outcome intention when I made these images). 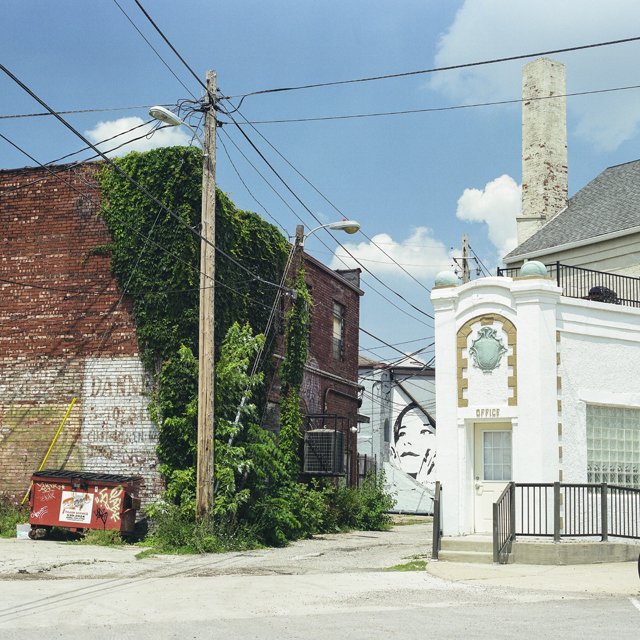 I began to see old commercial buildings as monuments to the past, and they became suitable literal subjects for my photographic (actual) subject matter. I could use reflection, juxtaposition, color, shadow and rearrangement of spatial relationships for a series of formal observations. (American Dirt observes and tells you what the environment means; I see art realities and record them to color negative film in medium-format cameras.)

Walker Evans was photographing the urban landscape/cityscape environment in the 1920s and 1930s for the U.S. government. He invented a genre he called lyrical documentary; and while his photographs comment by observing a specific set of circumstances, he also began using an identifiable art aesthetic to record the cityscape. He knew that he was to make propaganda, but he was able to freely work without much political oversight from his Roosevelt administration over-minders.

When Lee Friedlander came along in the 1950s, to work in the same urban landscape, he began imposing crazy juxtapositions and funny observations on the literal subject matter that had engaged Eugène Atget, Evans and Lazlo Moholy-Nagy.

A photographic movement that summed up the literal subject of cities (and non-natural landscapes), a deadpan aesthetic, art-formal attributes and difficult-to-categorize viewpoints was born in the late 1950s and early 1960s. The New Documents style influenced media and art and became a way of saying something but not saying something, usually about American consumerism and the way the landscape was being chewed up or abused by our boundless energy and desire to plant our buildings within the landscape.

Within ten years New Topographics, produced mostly by academics and students of photography, whose work seemed to have no emotion or viewpoint whatsoever, overtook the New Documents. I always like to think that I am working in a New Topographics style, but I recognize that by choosing a particular grade of historic structure – the seeming-everywhere commercial building – I am making a comment. None of the buildings I photographed for my exhibit, “Monuments of the City”, is abandoned, though they may seem derelict. The truth is that most cities have so regulated property ownership that abandonment of commercial property is rare. More likely, residential real estate becomes derelict and abandoned, then hazardous. 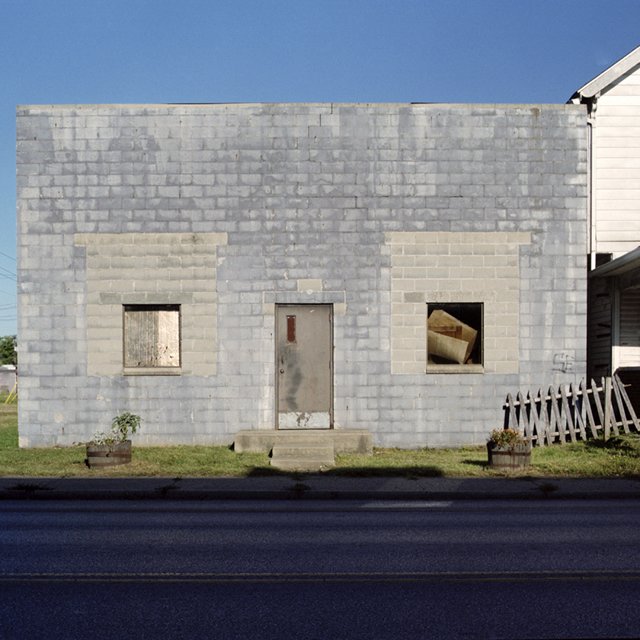 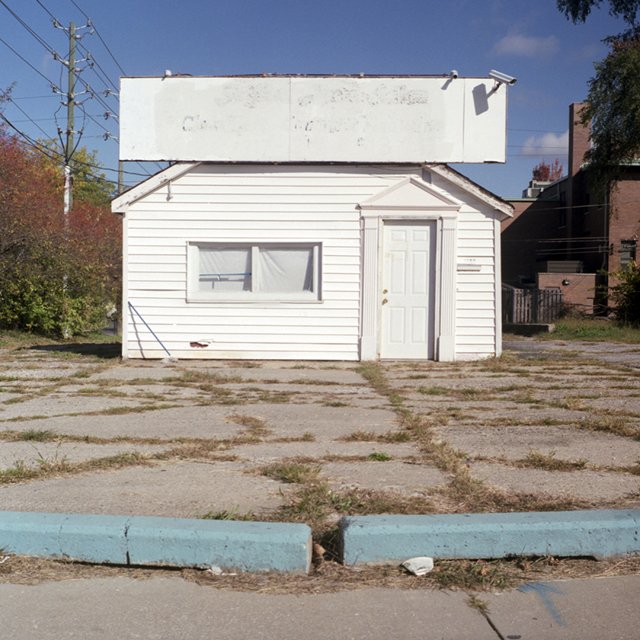 No, the commercial structures I show in my photographs are being maintained. I notice that the buildings I keep track of are sometimes in a perilous state or sometimes vulnerable to change. They are not immune from being sold, or from being torn down, or from being changed into some new and glorious use.

So I noticed that what I was capturing was a sense of portraiture, the character of these buildings at a given moment.

As I developed my project for my thesis work, many colleagues questioned why I would take on such a banal topic and use a deadpan aesthetic. I learned by studying 20th Century photography that what I was doing wasn’t groundbreaking, but it was personal. My choices made my research important. A few images from my upcoming exhibit follow. I think they are up the right alley for American Dirt. 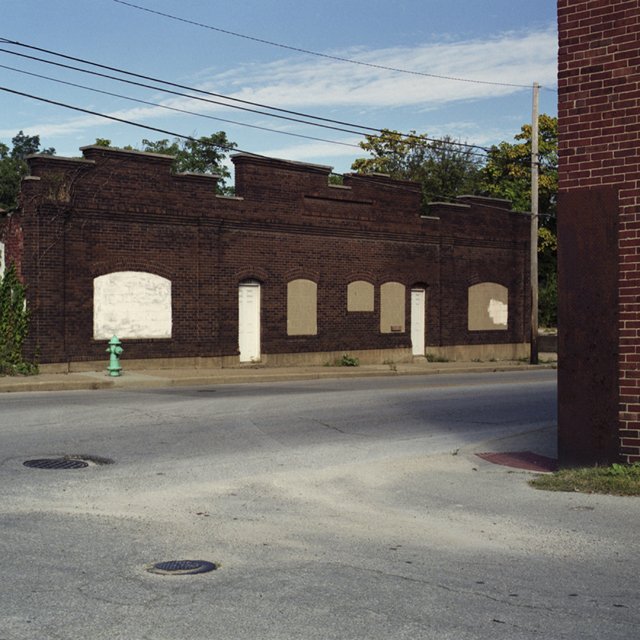 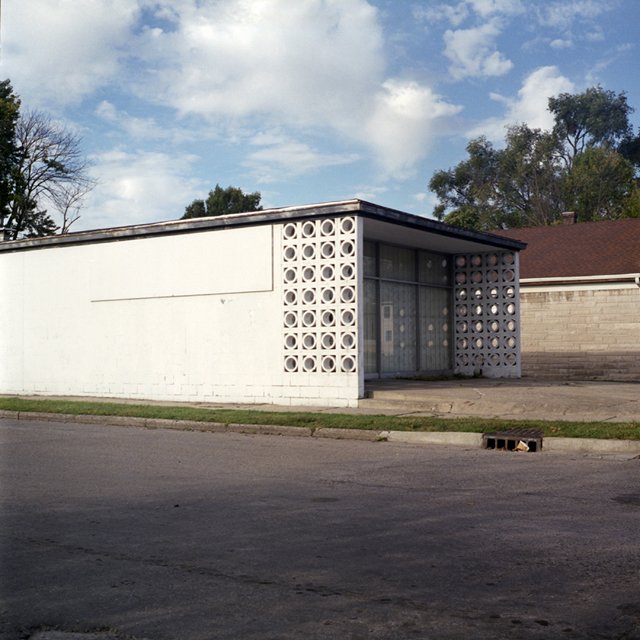 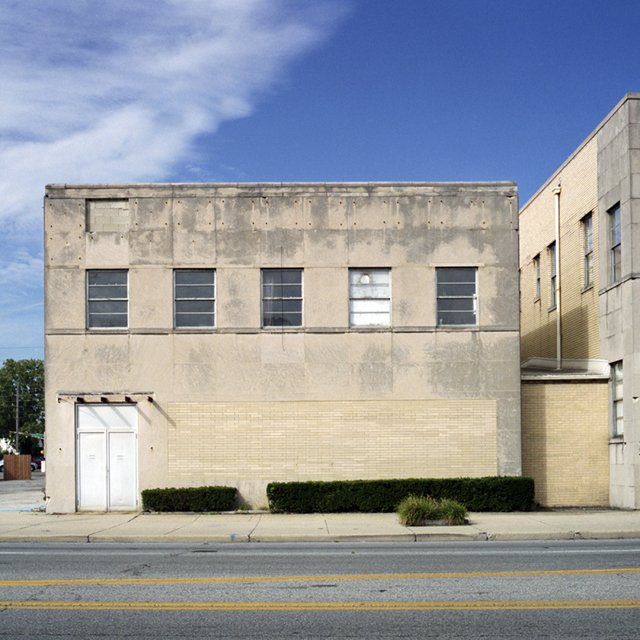 Steve Polston received his MFA in photography from Academy of Art University in December 2015, and will open his exhibit “Monuments of the City” at Bona Thompson Memorial Center in the Irvington neighborhood of Indianapolis. The exhibit will be open from March 4-April 12, 2016. He is a recipient of an Arts in the Parks grant from the Indiana Arts Commission and will present a public program at Starve Hollow State Recreation Area (Jackson-Washington State Forest) in June. He is a former senior editor of Outdoor Indiana magazine.

PrevGUEST POST: Monuments of the City – Part I.
Power centers: where beauty is in the eye of the consumer.Next

4 thoughts on “GUEST POST: Monuments of the City – Part II.”