And now a first (at least for me): a guest blog post. Two posts, actually. Steve Polston has followed my blog tirelessly over the years, and, though we have only occasionally lived in Indianapolis at the same time, he has long been generous enough to share with me his insights on landscapes, both in writing and visually. It has long been clear that we enjoy viewing the world around us through a similar visual filter, though he has an added ace in his sleeve: he recently completed his MFA in photography and will be exhibiting his work later this spring. I’m privileged to have him offer his views here on American Dirt.

Eric invited me to provide a couple of guest blogs for this space because of our shared enthusiasms – the urban landscape and photography.

My research for the past few years takes a look at historic architecture (mostly old commercial buildings) through the medium format film syntax that photographers have used to examine the urban landscape/cityscape environment.

Eric has used photography as an aid to his brilliant research and teaching about what is happening in our cities, sometimes focusing on pedestrian right-of-ways, sometimes roundabouts, sometimes bus lanes, sometimes re-use and redevelopment schemes, and sometimes about what’s gone wrong in the hard space. Eric always asks the questions about what human behavior is driving the outward changes, plans and disasters. (He also mentions positive things, too, such as traffic signals calibrated to save time or allow bicycle safety. He loves bicycling on city lanes and streets.)

Eric and I share a love of cities and enjoy thinking about what was, what is and what may happen next.

I began thinking about monuments as a photographic project because it has been said that Indianapolis has more acreage devoted to honoring war dead than any other U.S. city, and is behind only Washington D.C. in the number of war memorials. We have – like many cities – monuments to war dead, cultural heroes and even political heroes in civic plazas and parks. Indianapolis doesn’t just confine these monuments and memorials to the central pedestrian ways, but has erected statuary and fountains in many parts of the city. 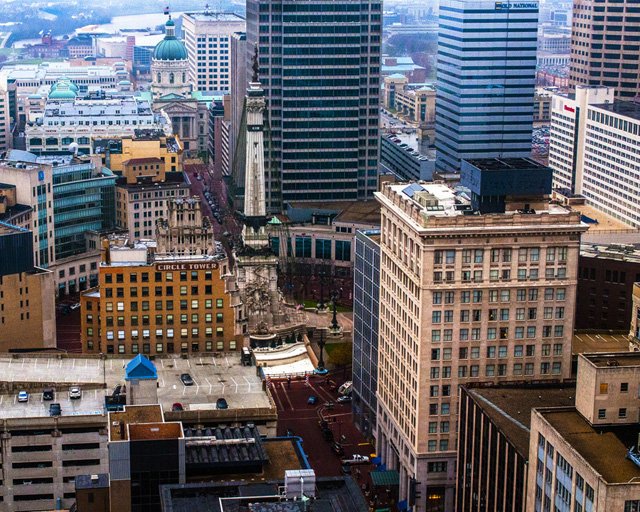 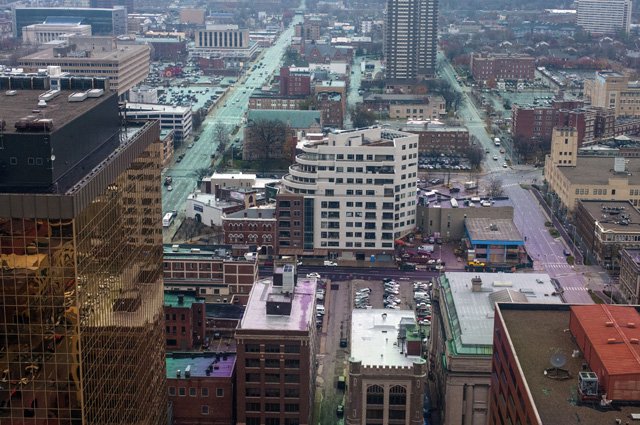 What occurred to me a few yeas ago is that a modern city state also erects tall buildings as testimony to cultural, educational and financial heroes – another kind of monument altogether. There are banks and bell towers, theaters and government complexes, as well as shopping malls, hotels and churches. Each tries to touch the sky and each casts a shadow or blocks a piece of the sun.

I took a camera up to the observation deck of one of our city’s tall buildings and made shots across the Downtown and nearby neighborhoods. I saw the skyscrapers and the schools and the factories and the warehouses – and not just the new stuff. (The UV-treated window glass of this building added the colorful hue-alterations in the photos, so I was happy with the saturated colors in the images, but found it to be a little jarring.)

The city knows me as a habitué of its shadowed alleys, parking garage roofs and factory districts. I enjoy looking at old brick buildings across streets where the brick is showing under worn-away asphalt.

It all clicked for me when I realized that our present era is not the only era that saw buildings arise as monuments to commerce and advancement. Old neighborhoods all around this city had dense concentrations of single-floor car dealerships, dry goods stores and taverns.

And I traveled to nearby Indiana cities and found the same idea: the monuments of the city aren’t bronze statues as much as these old buildings, many standing all alone on street corners or commanding an entire block. Even in January and February this year, I’ve been to Washington D.C. and many of New York City’s Brooklyn and Queens neighborhoods … the low, single-story buildings that I enjoy still remain in abundance; some people note that just about everything that could be torn down has been and almost all of what remains will probably be saved and re-used. 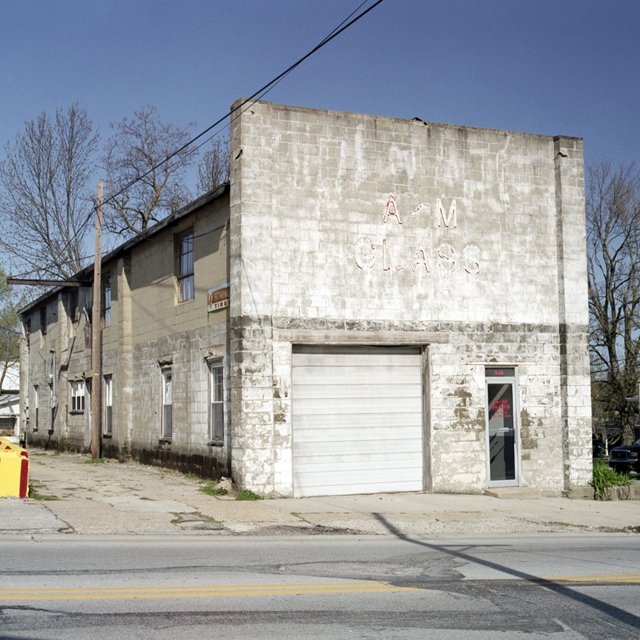 Many photographers have taken up the cityscape/urban landscape genre as their literal subject matter – none so prolifically as Eugène Atget, who from about 1900 to 1926 created tens of thousands of images of Old Paris because he knew artists and set designers would need photographs as reference for theater sets. He soon found a market among city planners who wanted a record of what was being destroyed as the city began to build modern infrastructure for sewers, traffic and parks. He sold one catalog of images (which he created on glass plates as negatives) to city planners, and then began to visit the same sites again.

Atget’s elegiac visitation to old parks and bridges, esplanades and gardens began to touch on the fine art aesthetics coming to life in Europe that illuminated the flatness, juxtaposition, and revision of spatial relationships that we recognize as being predominant from the 1930s onward.

Lazlo Moholy-Nagy began to work with the subject of the city, but turned it into fine studies and abstractions, and then Walker Evans (working for the American government as a public works photographer) used the city to invent what he called lyrical documentary, a form he could employ to comment on society and freedom during the American Depression.

In the second part of this two-part entry, I will write about what happened next in our cities, photographically speaking, and get to the heart of this work.

Steve Polston received his MFA in photography from Academy of Art University in December 2015, and will open his exhibit “Monuments of the City” at Bona Thompson Memorial Center in the Irvington neighborhood of Indianapolis. The exhibit will be open from March 4-April 12, 2016. He is a recipient of an Arts in the Parks grant from the Indiana Arts Commission and will present a public program at Starve Hollow State Recreation Area (Jackson-Washington State Forest) in June. He is a former senior editor of Outdoor Indiana magazine.