Contemporary design and its discontents.

The clarion call for architectural conformity may prove to be urban redevelopment’s greatest hurdle. Small business owners and residents in formerly blighted districts who invested in the neighborhood first—the “pioneers” so to speak—often assert themselves powerfully into any proposals to alter the neighborhood that come from that second generation of investors—i.e., the ones jumping the bandwagon. Those who arrived first tend to feel they have a not just a vested interest in the community (it would be hard for anyone to argue otherwise), but that they have a right to tell the newcomers where and how they can build, as well as more or less what it needs to look like. To be fair, the remonstrations usually start out polite. The most common tropes include the following: “not in keeping with the character”, “completely out of scale”, “we were hoping for a more traditional architectural style”, followed by the inevitable “this will create a traffic and parking nightmare”. Rarely do these protests escalate to outright picketing on sidewalks. But, more often than not, they don’t need to. The developer alters the design, scales back the density, or furnishes the proposal with amenities demanded by neighbors who have contributed nothing to the land or property in question. And this push-and-pull is just a part of the overall process in reinvesting in an area that had long suffered from disinvestment—a condition that characterized virtually all American downtowns at some point in time. No wonder it seems so hard to build on that scraggly, forgotten patch of land at the corner of State and Main.

I just painted the community engagement/redevelopment phenomenon with a broad brush in the previous paragraph, while harboring more than a fair share of derision to the anti-development contingent, which most cities’ business journals chronicle regularly. It’s not entirely fair of me: after all, opposition to development can help rectify poor design decisions, it can stymie particularly unwise proposals, and it can help developers account for the full range of consequences that a major earth-moving initiative will impart on an urban center. But, more often than not, community engagement will prolong a proposal’s schedule from groundbreaking to occupancy permits, and, if the delays are significant enough, the entire proposal can slip outside of the favorable market cycle, the demand will ebb, and the deal collapses. This is all well and good if the proposal was misbegotten, but it does result in stalling investment. And urban centers, despite widespread comeback, still need more investment.

The powerful cultural push for a consistent aesthetic makes that much sweeter of a surprise when we encounter an exception—where someone was actually able to pull off a modern-looking building in an otherwise 19th century district. Here’s an example in Grand Rapids, along Monroe Center, the city’s three-block commercial spine. 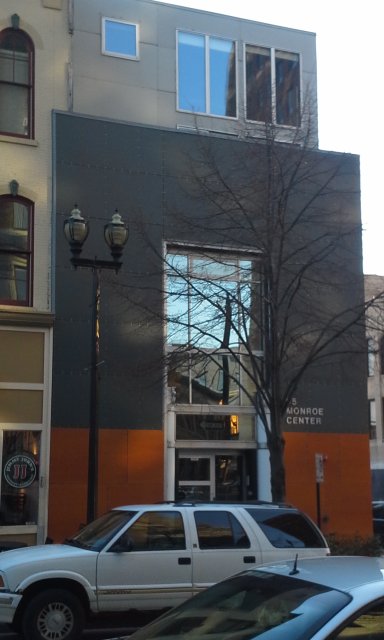 Sure, it’s easy to tell just from looking at it that it’s not a style that would have been popular a century ago. But look at it juxtaposed with its neighbor: 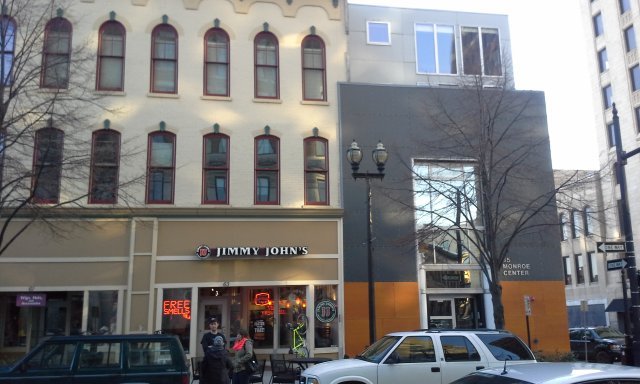 It’s an outlier. Virtually all the other structures on this well-preserved street fall within a comparatively uniform architectural language. 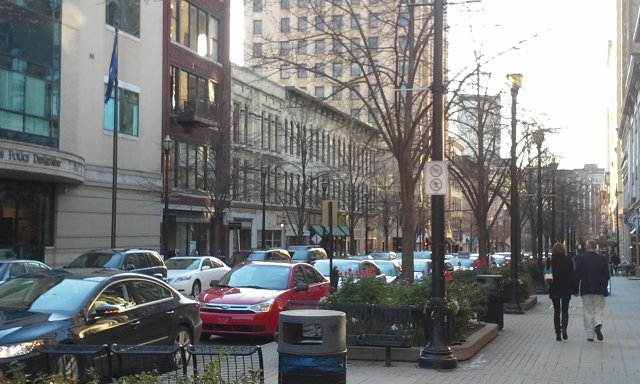 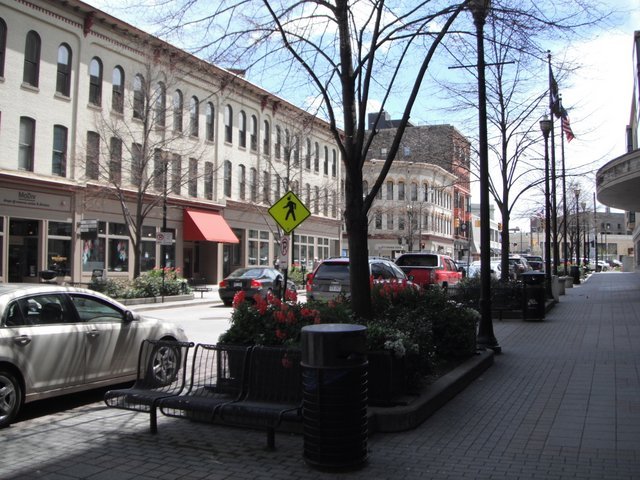 For me, the marvel of this structure wasn’t just how contemporary it looked, but how it was able to fit snugly in such a small space. A view from the corner reveals how small its frontage really is. 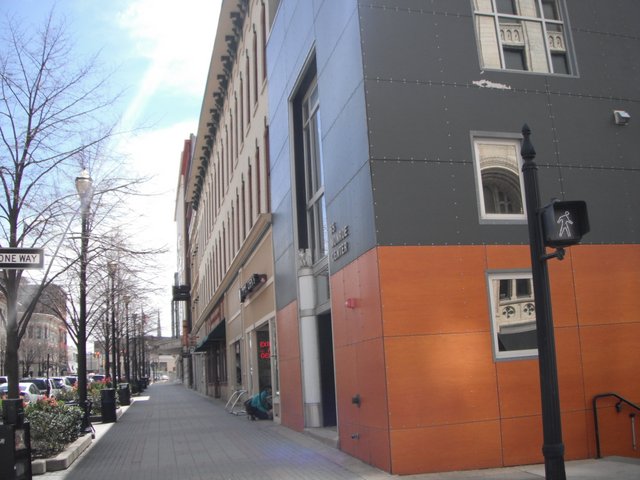 While it’s perfectly reasonable for a city like Grand Rapids to accomplish some smart urban infill, it’s less likely to see it happen on such a small parcel. Why? Land values are usually prohibitive—not for being too expensive, but for being too cheap. The cost constructing something on a small parcel is unlikely to yield as much of a return, because the economies of scale result in a higher per-square-foot cost overall than it would take to develop a much larger parcel. And a city with low living costs and modest land values—like Grand Rapids—could not command sufficiently high prices for the developer to yield a good enough return. So, while a quarter-acre parking lot could easily attract developers in an expensive downtown like San Francisco, these parcels will stay fallow in smaller cities far too often, unless the city steps up with a subsidy.

Because of its anomalous appearance, this hip little building fascinated me during my brief visit to Furniture City back in 2014. 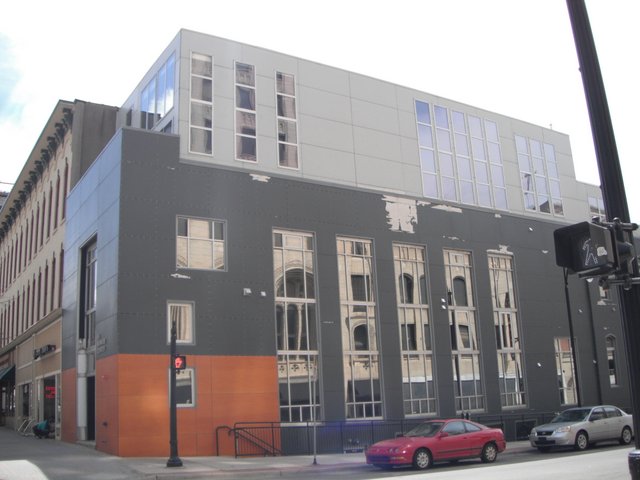 It’s been hard to research; the online chronicles of its progress are scant. But, as I learned (and I suspected), it’s almost exclusively residential: the fenestration on that first floor accommodates a service-oriented office, but such a window arrangement would never likely attract much retail. Beyond that, the remaining details were a real surprise, and most of it I learned from a YouTube promo in which the now-defunct development company offered a tour of the building during the construction process. The building itself, referred to by its address of 65 Monroe Center, hosts condos, and the entire development took place almost ten years ago, right before the market for condominiums collapsed. The details didn’t come easily: the developer seems to have dissolved his company Virgin Soil Development, LLC, though he remains a realtor for high-end homes in the Grand Rapids area.

But that YouTube video reveals one essential feature within the first fifteen seconds, and it’s the only photo I can find of what the site at 65 Monroe Center looked like before the development. Much to my surprise, it wasn’t a vacant patch of land, or even a parking lot. 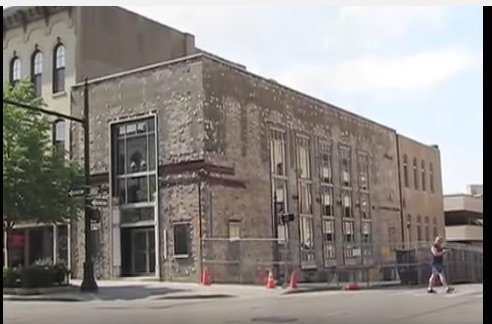 And a front view: 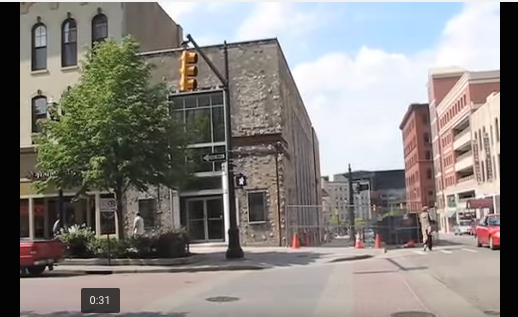 Instead, it was the Central Bank Building: nearly as old as the neighboring structures, but a complete eyesore, stripped of whatever architectural integrity it might have once claimed and little more than a stack of decaying bricks and exposed rebar. Apparently an earlier modification even lopped off the top floor. Thus, in choosing such a contemporary vernacular within a historic part of downtown, the developer hedged his bets. He risked incurring the ire of the neighbors—that they would reject it as too modern for the area. But since he chose a structure that was blighted to begin with—and a total loss from a historic preservation standpoint—just about anything would constitute an improvement. According to an old article from Rapid Growth Media, he gave it a new skin, restored one of the two upper floors, saturated the interiors of the seven residential units with amenities befitting the a late 2000s condo market, then configured a modest 2,500-square-foot portion for Virgin Soil Development’s offices in the garden level. He buffeted himself against just about any of the criticism the naysayers would usually lob in this direction.

One aspect of this shrewd redevelopment has nearly stumped me, and it’s a big one: parking. Of all the tropes quoted in the beginning of this essay, that’s the only one I haven’t yet shot down. And it’s a huge factor for why smaller parcels in downtowns often remain undeveloped. Manhattan or San Francisco, with their robust mass transit, could easily build upwards on a small footprint without including garages. Car ownership in those cities is low. In Grand Rapids, a high-end multifamily project will inevitably need on-site parking—ideally covered—to remain marketable. But where do you put it? There’s no room to build a separate parking deck, and, for just seven units, it would be cost-prohibitive. And the neighbors, protective of the comparatively short supply of spaces (both on and off-street), could easily kill a proposal if the developer fails to conceive a smart parking solution. From what I can tell, Virgin Soil Development tucked a few garages behind the building, where a curb cut allows for a narrow drive and a few one-car facilities, marginally visible in this Google Street View. But without that clever inclusion, the Central Bank Building would probably continue to languish until it faced the wrecking ball.

I tip my hat to 65 Monroe Center, and to its developer for transcending all the hurdles before it. Not only did Virgin Soil find the sweet spot in the market through selling off the units as condos, but it created a slick product that contrasts sharply from its neighbors while still offering a massing that is resolutely urban. It’s so polished that I couldn’t tell if it was infill or a rehab when I first encountered it. And either one would be an achievement. 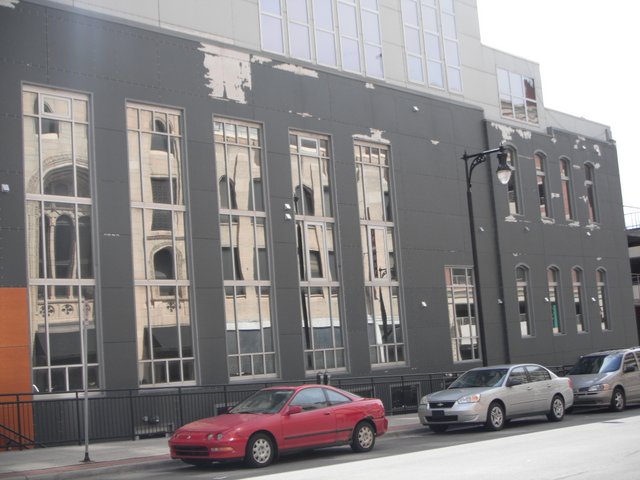 In fact, it may be an achievement that could still prove nearly impossible to replicate in 2016, when the condo market is re-emerging, phoenix-like, from an almost complete immolation at the peak of the recession. Sure, this building is already showing some aging, in the fact that it needs a new paint job. But these photos come from spring of 2014, and a more recent Google Street View suggests that the condo association gave the façade the sprucing up it needed. Will the other small vacant or underutilized lots in downtown Grand Rapids benefit from such a redevelopment? Only if the stars align. Or if the neighbors don’t try to quash it for being too tall, too dense, too modern, too “out of character”. Me? I’m betting on those stars.

PrevPower centers: where beauty is in the eye of the consumer.
A threadbare patch on the new urban tapestry.Next

4 thoughts on “Contemporary design and its discontents.”