When your domain is compromised, how do you take the high road?

The impacts of government policies can be subtle, far-reaching and antithetical to their original good intentions. Identifying examples of this is part of my duty as a blogger. Sometimes, though, the evidence of a policy is right there in your face…called out by the person most affected.

This former home in Greenfield, Indiana (about 20 miles east of Indianapolis) sits at a prominent corner in the small city—prominent enough that it no doubt seemed natural to convert into a storefront, called The Red Rooster. But the intersection is also prominent enough to warrant modifications to the design in order to accommodate changing traffic patterns, which is what happened here.

How do we know this? The proprietor tells us. In the photo above, see the quilt-like emblem, vaguely resembling Pennsylvania Dutch hex sign. Now look at the marquee lettering below it. Perhaps this zoom-in will help. 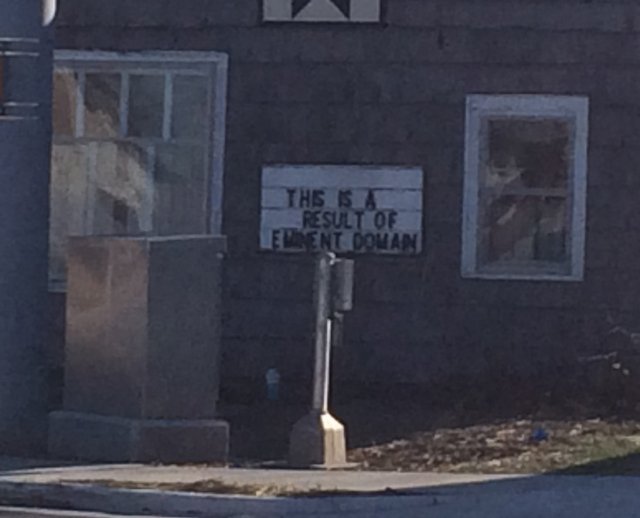 “THIS IS A RESULT OF EMINENT DOMAIN.” And the recent construction work is patently visible. Notice the light color of the concrete sidewalk and curb, suggesting its relative newness. 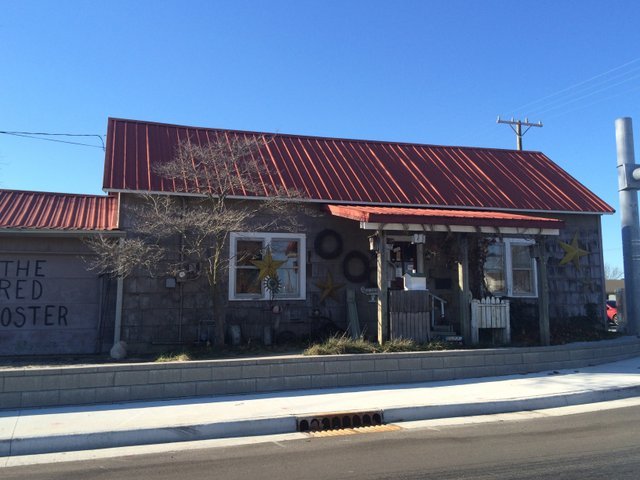 To enhance this sidewalk and turn radius, the traffic engineers had to encroach on the abutting private property, and the legal backing necessary to do this comes from the final two clauses of the Fifth Amendment: “…nor be deprived of life, liberty, or property, without due process of law; nor shall private property be taken for public use, without justice compensation.” The shape of The Red Rooster parcel shrunk. It had to, for the sake of the public right-of-way.

The taking of private property for public use is the “eminent domain” evoked on the sign at the front of The Red Rooster. While this principle—safely ensconced in the Bill of Rights—is the most fundamental means of transferring property from the private to the public sector, it remains controversial. The interpretations of “public use” and “just compensation” have come under some scrutiny, but perhaps the most challenging word of all is, not surprisingly, the ever-powerful verb “taken”. Accusations of takings usually follow if the plaintiff charges that eminent domain has taken place without the “just compensation” offered by the public entity, which usually must equate to fair market value. The sundry interpretations of “takings” constitute a significant portion of a typical land use law class required of most students in urban planning, and the famed Kelo v. City of New London decision of 2005 remains highly controversial, since the Supreme Court of the United States defended the execution of eminent domain proceedings for economic development objectives, which, in a 5-4 decision, constituted a legitimate public use, and, thus, a taking with just compensation. The decision aroused rare bipartisan anger: conservatives typically saw it as an unprecedented affront to private property rights, while liberals saw a compromise in government even-handedness that would favor wealthy, politically connected entities with attractive investment strategies over more modest landowners—an option largely articulated through Justice O’Connor’s oft-cited dissent to the Kelo decision.

Returning to Greenfield, the most obvious conclusion to draw from this is that the transportation/public works authorities decided to enhance both the sidewalk and the turn radius to this intersection. (Note that I say “public works authorities” in the most generic terms, because I’m not sure it was the City of Greenfield. One of the two streets in question here at this intersection is U.S. Highway 40—the National Road—placing its responsibility at the federal level. So, while the federal government has protected the states’ power of eminent domain, this particular example may owe far more to the feds.) At any rate, the intervention is powerful when one considers what The Red Rooster property used to look like. Check that corner in the photo below: 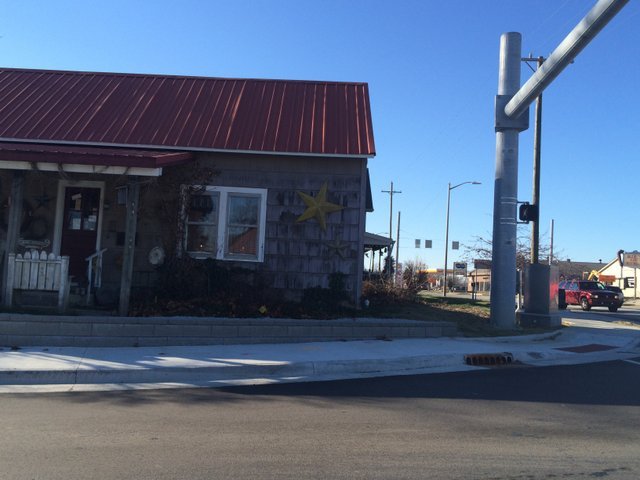 Now compare it with a Google Street View image captured in the fall of 2013.

It seems that, at first blush, the authorities redesigned the intersection to allow a gentler turn radius. From a planning perspective, this is frustrating: rarely would transportation planners advocate for larger, gentler turn radii. After all, that only means a vehicle has to slow down less when making that 90-degree turn. And if vehicles can speed through right-hand turns, it poses a considerably greater threat to pedestrians—all so a motorist can save five seconds. By the same token, most planners are frustrated when public works authorities invoke eminent domain to widen roads, which routinely only serve to benefit speeding vehicles—not pedestrians or bicyclists, and certainly not the landowners who must sacrifice part of their yards for a busier, noisier thoroughfare.

In more urban settings, public works departments are actually reducing the arc of the curves at intersections, thereby requiring vehicles to slow nearly to a halt when making that turn. I just blogged about some “bulb-out” curb extensions that have this exact effect in the pedestrian haven of Hoboken. But here in Greenfield, the opposite seems to have happened, so we’re witnessing an increase in vehicle capacity for a section of U.S. Highway 40 that, if more sensitively designed, could accommodate pedestrians fairly well. Notice the neighboring properties to The Red Rooster; all the structures directly address the street, rather than a big parking lot. 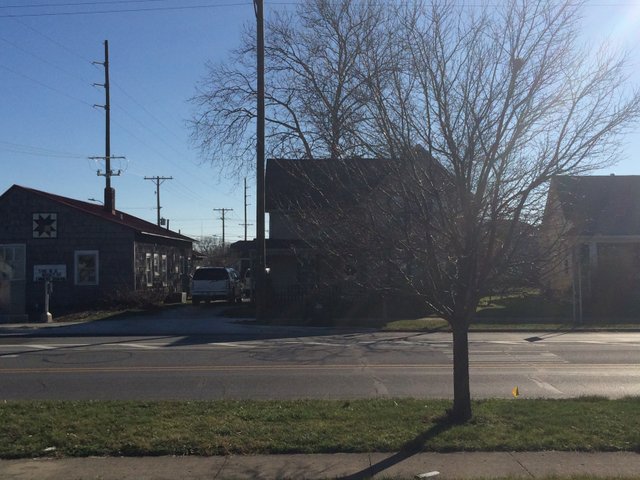 In the photo above, The Red Rooster is on left. Now let’s pivot a bit further to the right. 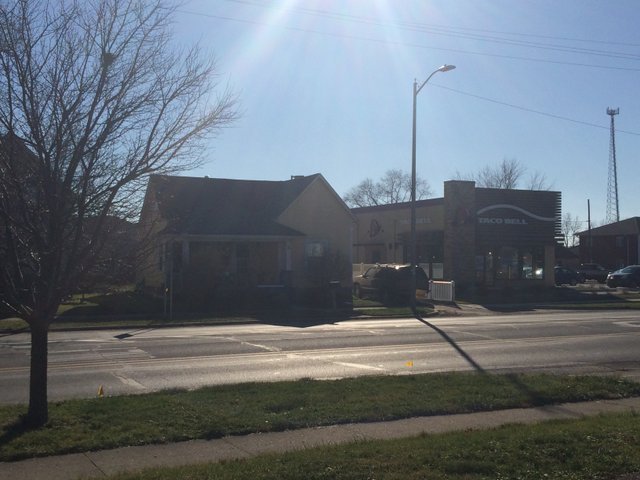 The Taco Bell is particularly interesting. It’s new construction (it wasn’t there in the 2013 Google Street View), and it also has a very modest setback, with a door that fronts the street, barely visible in the shadows but underneath the word “TACO”. This design is relatively surprising in a small city like Greenfield, because it shows a greater sensitivity to pedestrians than usual. Typically, we’d expect the franchise to position the structure far from the street, with a big parking lot first and foremost. With this design, pedestrians can enter without having to cross through a bunch of parked cars. As commendable as this design is, it makes it more frustrating that the intersection just a half block away was actually turned into something less pedestrian friendly. 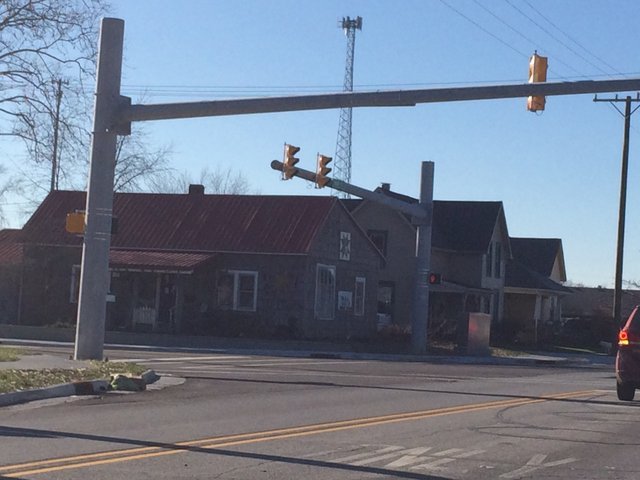 Then again, it’s possible a counter argument applies here—one that makes the public use for his eminent domain proceeding much more understandable. A quarter mile south of this intersection (if one turns to the left on the above photo) are a number of light industrial uses, many of which include warehouses for trucks and tractor-trailers. Here’s what the area looks like from Google Street View. It is likely that large vehicles simply couldn’t handle the tight turn radius without cutting over the curb; the 2013 view of the intersection shows damage to the sidewalk’s concrete. My suspicion is that re-design of the intersection took place more out of a desire to accommodate large tractor trailers and other logistical operations, most of which could not manage this turn without either reversing first or approaching it so slowly that it disrupted all traffic flow. Since the number of warehouse/logistics oriented businesses south of this intersection is considerable, such vehicles will probably thrive on this more conducive design for the foreseeable future.

In the end, the “public use” that invokes the takings clause of the Fifth Amendment—eminent domain—is manifest. Whether it is a Pareto improvement is open to debate. The owner of The Red Rooster sure doesn’t seem to happy about it, or perhaps he/she was dissatisfied with the fair market value offered for the land as part of the just compensation. Or perhaps the folks at The Red Rooster fundamentally disagree with the principles of eminent domain; many Americans do. The real answer may come from the content of that marquee back in 2013, before all the modifications. It’s not easy to read, but it’s clear when one zooms in: “DEFORMED PROPERTY FOR SALE – INTERESTED?”

PrevIs it time to peel back our provisions for parking?
Nimble fingers, sticky keys.Next

6 thoughts on “When your domain is compromised, how do you take the high road?”