Hot on the heels of my podcast is another retail rumination. By now, it’s safe to assert that the conventional enclosed shopping mall—long the paragon of middlebrow American commerce—is an eviscerated zombie, trudging onward with no clear goal, and a huge contrast compared to the heydays of the 1970s and 80s. I’d wager that up to one-quarter of malls are, for all intents and purposes, dead: characterized by vacancy rates of over 40%, while mom-and-pop stores that lack a national presence dominate the remaining occupied space. Some of these malls are merely struggling but retain viability because of an anchor tenant that lingers amidst an otherwise underserved market. Others are so far gone that they’ve recruited churches and Community Theater to fill the vacancies; their only option in years ahead is to join the hundreds that have already closed.

A recent Atlantic Citylab article is a bit more sanguine than I am: while it recognizes the dire straits of a sizable chunk of middle-market malls, it suggests that any that aren’t dying (that is, the remaining 75-80%) are doing just fine. But are they? My previous ponderings on this beloved subject suggest otherwise. While about half of American malls are surviving well enough, even the standard for what constitutes “well enough” has downgraded considerably, as manifested by my blog articles on Oxford Valley and Quaker Bridge malls. Neither is dying. But Oxford Valley lost one department store in 2008 and has yet to replace it, while Quaker Bridge’s occupancy rate among its in-line tenants remains stuck at around 80%. This is normal at this point. And it constitutes a satisfactory performance by 21st century standards; from a 1985 lens, any mall that couldn’t secure all of its anchor tenants would be a disappointment.

Looking beyond the dead, the dying and the significantly maimed, what remains are the one-quarter of malls that still prosper, most of which attract a higher-income demographic. While a handful of middlebrow malls are thriving—my home city’s Greenwood Park Mall comes to mind—the majority of today’s successful malls typically have at least one of the following department stores as anchors: Nordstrom, Lord and Taylor, Saks Fifth Avenue, Bloomingdale’s or Nieman Marcus. Such is the case with Bridgewater Commons, just outside Somerville, New Jersey. 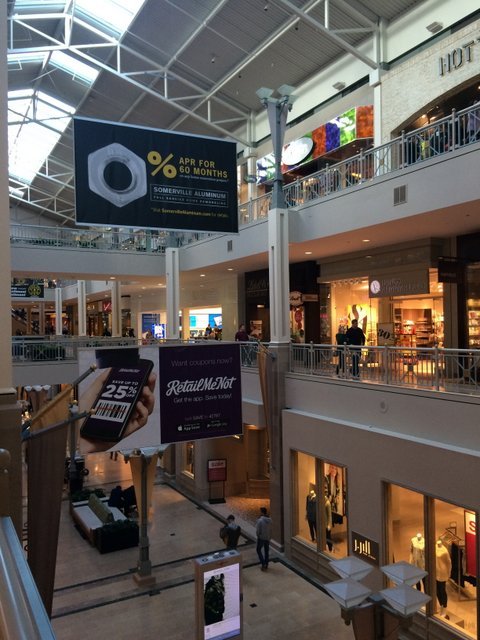 It‘s a high performing, medium-sized mall on the fringe of the heavily urbanized portion of metro New York City, ringed by the I-287 beltway. While the department stores—Bloomingdale’s, Lord and Taylor, Macy’s—should be a dead giveaway that this mall is part of the top quartile, there’s no point in focusing on that because they speak for themselves. More interesting are the subtle details, like this humble storefront on the second floor: 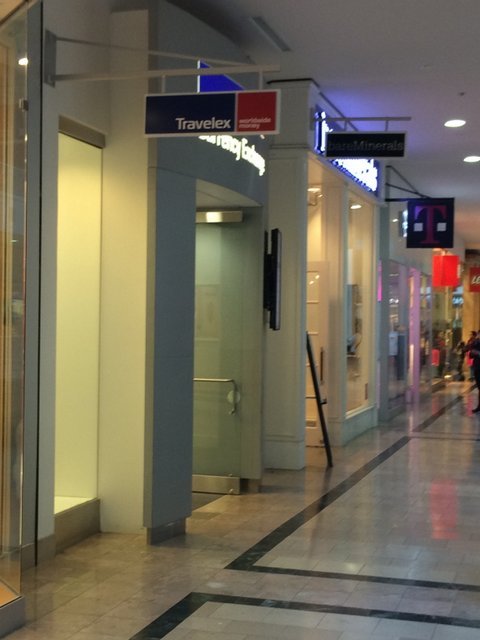 Currency exchange is a standard feature at an international airport, particularly Travelex. But it’s not every mall that offers one as a permanent fixture. No doubt it’s a testament not only to the purchasing power within Somerset County, but to the county’s advantageous location in greater New York City. Somerville’s streetcar suburban character quickly gives way to car-oriented, expansive homes on large wooded lots to its west, helping secure Somerset County as one of the nation’s twenty wealthiest—an opulent satellite to an alpha world city. The outer-ring New Jersey suburbs undoubtedly host a lot of households whose breadwinners owe their livelihood to Wall Street and global trade, endowing them with incomes that help keep Bloomingdale’s—and Travelex—in business. Furthermore, it’s probable that affluent international visitors frequent this mall: it’s close to a variety of corporate headquarters with a multi-national presence, it’s reasonably accessible by NJ Transit’s commuter rail and bus (or a one-mile walk), and the inordinately low cost for apparel in the US has long attracted consumers from other first-world countries (though probably much more when the dollar was weaker). 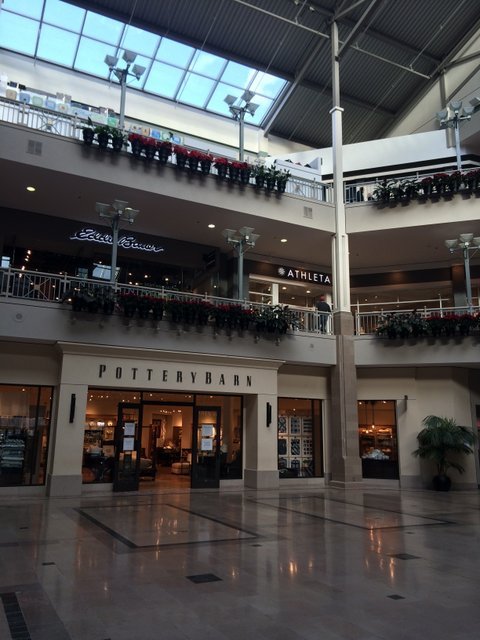 The third and final indicator that Bridgewater Commons isn’t your run-of-the-mill middle class mall is the least conspicuous, but it’s patently visible here: 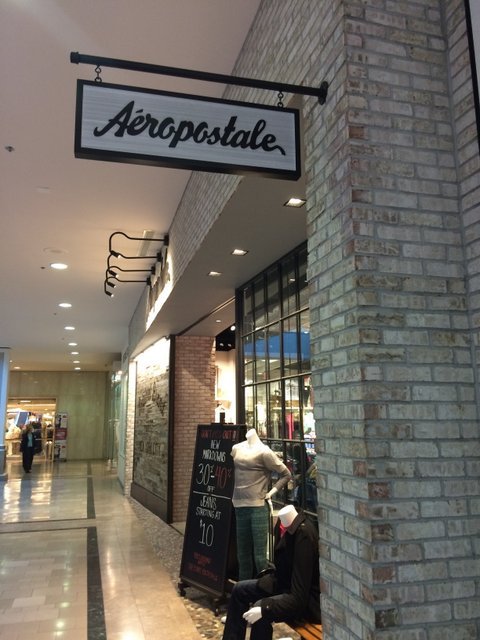 Do you see it? If not, let’s try capturing the storefront from a different angle. 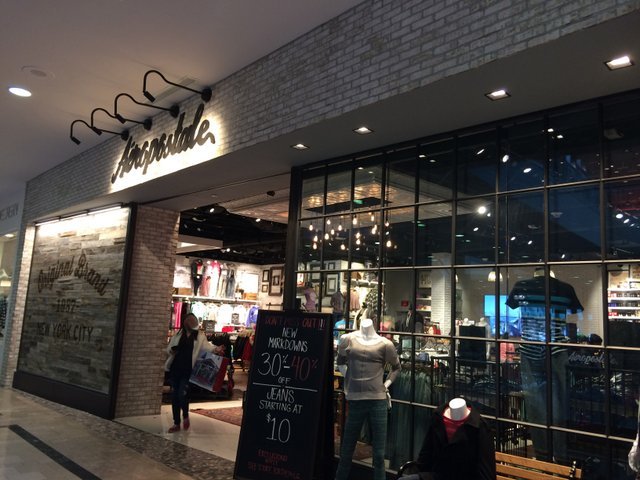 Still haven’t picked up on it? Let’s look at another, more middlebrow mall fifty miles away, with a photo taken just a few days later. 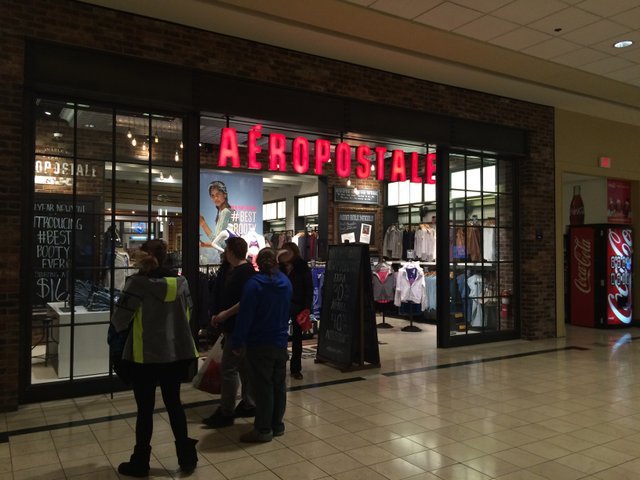 That’s right: Aéropostale has pioneered a completely different logo from the one most of us would recognize—the one the company has used for years. This decision could indicate two most likely motivating forces: the retailer has modified its brand for Bridgewater Commons to convey an ambiance that is more distinctive, more recherché. (Notice the backlighting on the Bridgewater logo: a timeworn strategy for conveying upmarket consumables.) The other motivating force is that the 40-year-old company is rolling out an entirely new logo, and it has decided that the affluent consumer of Bridgewater Commons is more brand-sensitive than elsewhere in the country. My vote is that the latter option is the correct one: the website deploys the softer, cursive, lower-case font instead of the forceful red from prior years. By the metrics of the advertising community, it’s a radical rethinking of the logo, but probably a necessary one, considering the brand has suffered the same plunging sales volume as many other youth-oriented retailers. And, according to this Forbes article, the most damaged companies have been those whose identity depends on their name and logo rather than the design, placing The Gap and Aéropostale in inauspicious company with more innovative, ductile “fast-fashion” counterparts like H&M or Forever 21. Such a brand overhaul is a testament to how much Aéropostale needs to reinvent itself, and clearly Bridgewater Commons offers a smart test market.

But it’s not the only one. Down the hall is another reincarnation. 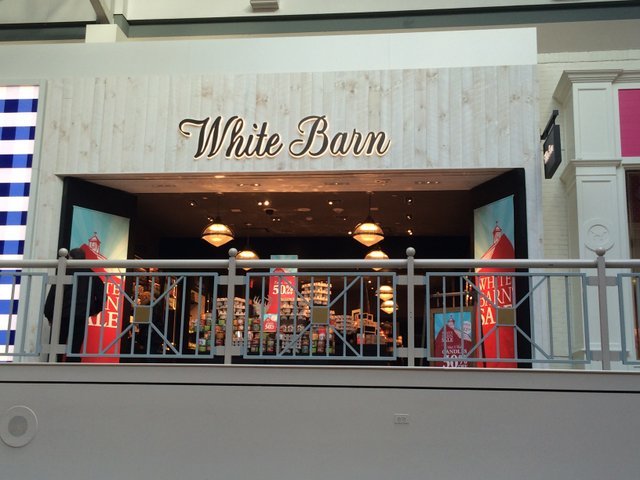 I’ll confess I’m less familiar with this brand’s overall performance, or whether it has “rolled out” the new logo nationwide yet. But this article suggests that Columbus-based L Brands Inc. (better known for Victoria’s Secret and Bath and Body Works) has reintroduced White Barn as a standalone brand after years of dormancy, having lost the candle wars to the ubiquitous Yankee Candle Co. Perhaps I’m showing my age and candle ignorance, but this is the storefront I remember. Now it’s just “White Barn” and only operates out of about 30 locations (and, interestingly, the Bridgewater Commons location does not yet appear on the website at the time of this posting).

Will this upscale New Jersey mall—one of several fancy retailers near the I-287 beltway—prevail in the new era of retail? Time will only tell. But the evidence presented here indicates that some key tenants think it’s got staying power. One thing is certain: across all American malls (both flourishing and dying), virtually none of the in-line tenants that adorned the halls in 1975 still exist. I think of names from my childhood: Buster Brown, Chess King, Thom McAn, B. Dalton’s, Mr. Bulky’s. The retail sifting will continue through our surviving malls. But by 2025, who knows with the sieve will look like.

PrevPODCAST: What are we going to do about all these dead malls?
Helping downtowns meet demand and save face.Next

9 thoughts on “Measuring malls through malleability.”