Is it time to peel back our provisions for parking?

With few exceptions, any time a person living in a less urban area must patronize a business in a more urban area, a single question emerges…

But this commonplace consideration masks an underlying predicament that’s a lot hairier: what is the perception of parking at the destination? And, as is often the case when it comes to perception, the standard deviation is huge. Some people consider the inability to find an immediate parking space constitutes a tremendous hassle; others are willing to drive around a few minutes before branding a destination parking-challenged.

Across the most of the country, municipal zoning provisions have historically accommodated parking generously, often to the point of requiring a certain minimum number of spaces for any new construction. In an era where car ownership in the US approaches 1.8 vehicles per household, it’s not surprising that many business operations desire at least a few dedicated parking spaces for their prospective patrons. After all, if a building doesn’t have enough, the results rarely benefit anyone: the customer may park at an adjacent property, depriving another business of a rightfully claimed space; the customer may park in an unmarked spot, impeding other vehicles’ ability to get around and potentially breaking the law; the customer may ultimately give up patronizing the business altogether. (The final of these outcomes merits further explanation: while it’s unrealistic to presume that the average person would drive to a destination and then shun it simply because he or she cannot find an easy parking space, the frustration of searching may prevent such a person from ever returning.)

Many businesses in automobile-centered environments have sought to account for the for the full variety of perceptions on parking challenges—which varies enormously—by providing as many spaces as a business might need in the most extreme situations. For this reason, the typical shopping mall sits squarely in an enormous ocean of parking spaces, sometimes bigger than the leasable square footage of the mall itself. Many of those spaces most distant from the mall entrance go weeks or even months without any use, but the mall wants to prepare for Black Friday, when such spaces are necessary.

Designing a commercial property for the most extreme parking needs is tremendously wasteful, for obvious reasons. And outside of the distant exurbs (where developers typically built the auto-oriented malls), the land costs are too high to justify all those spaces. Thus, a commercial developer has to find the sweet spot: building all the spaces necessary to make the adjacent property desirable, but not so many that it might not be able to recoup the costs—after all, in most of suburban America, it is infeasible to ascribe a price to parking because people presume spaces will always be free. Since the parking is typically a sunk cost, it only exists as an amenity to make leasable space within the adjacent building that much more attractive. It generates no revenue. But, until recently, municipalities often assumed that they couldn’t rely on developers to design the suitable number of spaces to ensure the property’s market viability; thus, zoning provisions would mandate certain numbers of spaces, depending on the land use. Sometimes the provisions would correlate to leasable space, sometimes to the number of tables (particularly in restaurants), or the maximum number of employees, or a variety of other indicators. Mandating a minimum number of spaces often resulted in parking lots that were far more generous than they needed to be…particularly in urban settings where patrons could reach a commercial destination by foot, bicycle, mass transit, or some other means that didn’t involve a personal vehicle. And with minimum parking provisions, the odds were good that, unless the developers seek a variance to these zoning regulations, they’d be wasting valuable real estate on superfluous asphalt—all built on the most conservative estimates of people’s perceptions of parking challenges.

Fortunately, things seem to be changing. If a destination is attractive enough, people will rarely shun it simply because it’s a bit tricky to park. 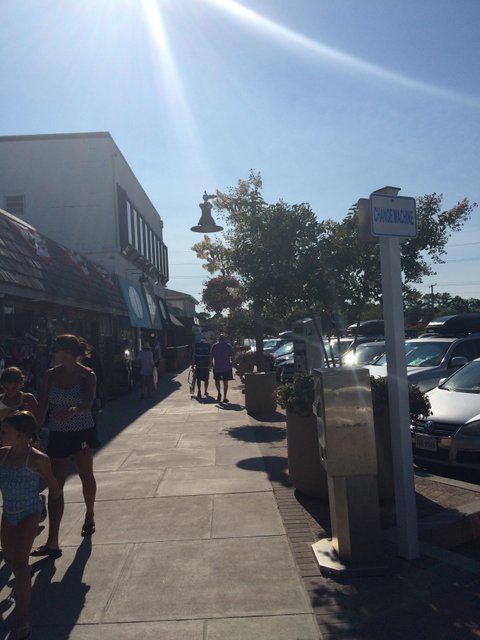 Rather than forcing new developments to include a minimum number of spaces—which may very well exceed what is necessary to sustain the development—cities are amending their zoning ordinances to eliminate minimum parking altogether. They’re recognizing that the market—i.e., the land developers—can decide what is best.

How’s it working out for them? Well, if the photo above is any evidence, the small but busy town of Bethany Beach, Delaware certainly has reason to fear a carmageddon, particularly in the summer when tens of thousands of visitors flock to the region for its attractive beachfront. The town’s zoning ordinance still includes strict requirements for off-street parking in most districts—but not all. That is, the Municipal, Open Space, Recreation Facilities and Educational District (MORE) contains no off-street parking requirements, but the other districts do. So, at this point, the municipality treats off-street parking in most zones as a sine qua non—a key feature of land development, requiring at least a certain minimum number of spaces.

But does the perception align with the reality? At least one stretch of Bethany Beach’s small commercial core suggests that off-street parking has little impact on the desirability of a property. 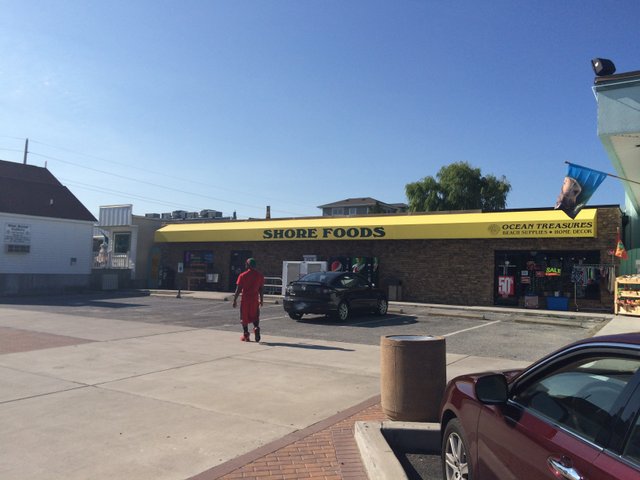 The Shore Foods offers about eight parking spaces, and yet, on a busy summer day, only one space is full.

Maybe it seems a bit rash to draw a conclusion from this single example. But it’s important to view Shore Foods in light of its context. On Garfield Parkway, Bethany Beach’s main drag, none of its neighbors have any off-street parking whatsoever. Pivot slightly to the right and it’s clear. 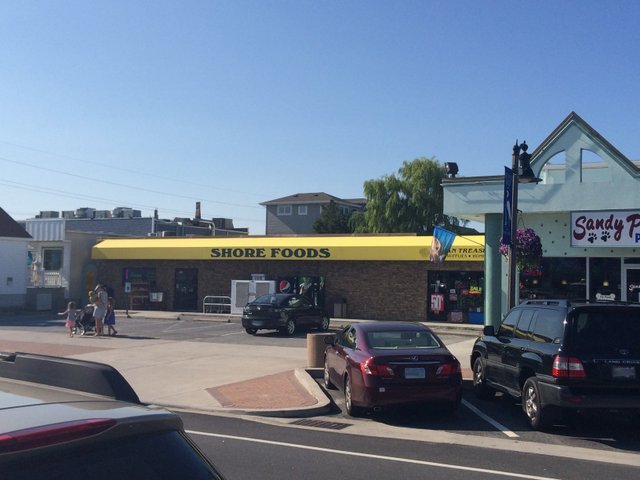 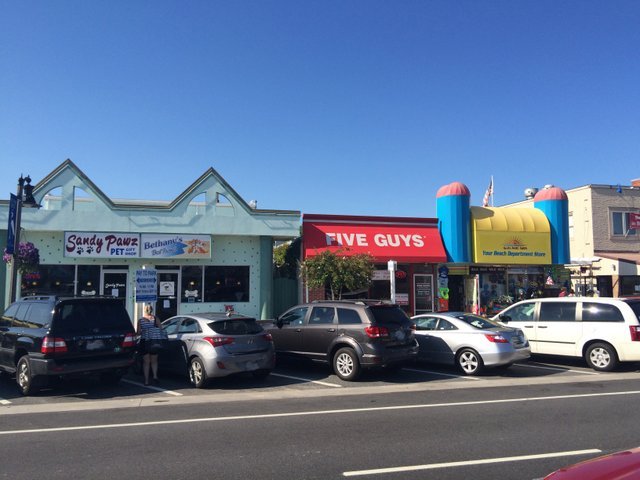 And it’s the same on the opposite side of Shore Foods, where the owners have repurposed what appears to have been a residential structure into an unconventional retail use with a vaguely nautical appearance. 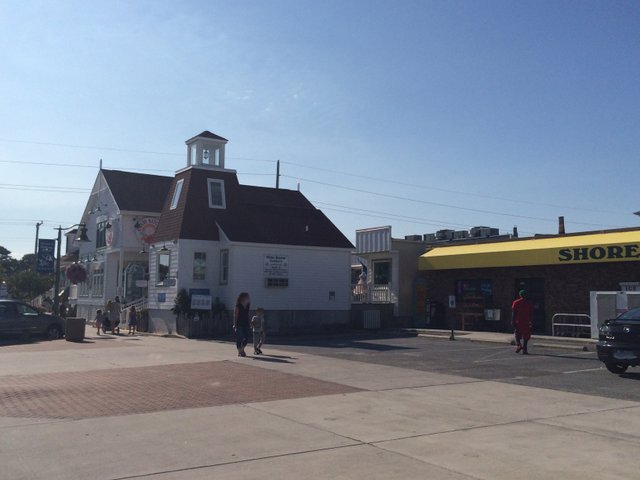 In fact, through the entirety of both sides of Garfield Parkway, all other properties have no setbacks, and, thus, no off-street parking. Only Shore Foods. For all the other businesses, customers must use the angled parking along the streets, as this Google Maps aerial confirms (Shore Foods is outlined in red): 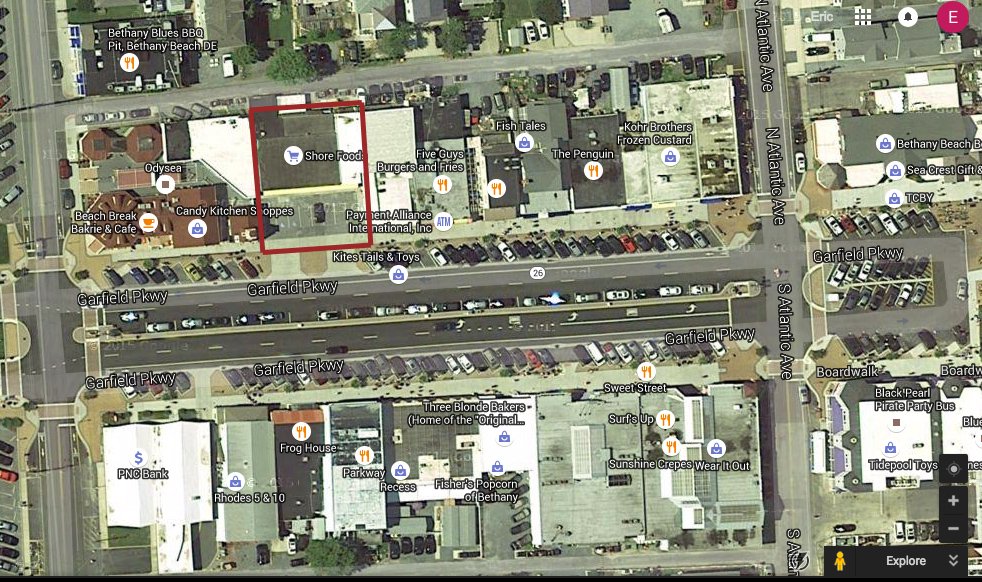 Again, this is a single example. But the on-street parking at Garfield Parkway comes at a premium: not only is it the primary parking source for at least two dozen businesses, it is also a mere two-minute walk to the beach. Odds are strong that Shore Foods strictly monitors its own parking spaces to confirm that people using it are patronizing the store itself, which explains why so many spaces are empty on a busy day. But it also draws attention to the fact that, on a gorgeous August afternoon (a weekend to boot!), virtually nobody is patronizing Shore Foods.

Considering the fundamental walkability of central Bethany Beach, it is possible that Shore Foods has more than one customer inside. But with its primary selling point—dedicated parking—front and center, a convenience store seems like a pretty low-energy use in a beachfront town, especially when one considers the neighboring properties range from specialty beachfront boutiques to popular chains like Five Guys Burgers and Fries. Bearing this in mind, it seems likely that the neighboring properties, with big open widows, aesthetic details and direct sidewalk access, might actually command higher leasing rates than Shore Foods, which, divorced from its spatial context, could easily be a convenience store in a struggling inner-city neighborhood.

Obviously it’s not fair to draw blanket conclusions about parking demand, when a littoral setting like Bethany Beach is hardly representative of the diverse array of commercial building typologies out there. But it would almost appear that the structure housing Shore Foods is infill development from a different time period than its neighbors—a time when people believed that convenient parking was more important than storefront appeal. Why does it look so different from everything else? Why such hostility toward windows? Why provide a setback from the sidewalk for all that extra parking, when the other buildings seem to be managing with none?

While the beachgoer market might crave parking lots so people can hit the waves, evidence suggests that they aren’t essential for the flourishing of downtown retail, at least as Bethany Beach is concerned. And odds are great that plenty of other urban markets—large and small—can also manage without shoehorning a minimum parking into the zoning regulations. This includes markets without any saltwater and sand nearby—i.e., the overwhelming majority. On-street parking is highly sensitive to a variety of exogenous forces: traffic patterns, population/income density, transit availability, mixed uses, and the anticipated length of stay for the average customer. But the biggest (and murkiest) factor of them all remains the perception of parking needs. And the failure to gauge perception can make or break a land developer in the blink of an eye. As America’s urban history proves, it takes more time to kill a city.

PrevParsimonious (but potent) pedestrian provisions.
When your domain is compromised, how do you take the high road?Next

3 thoughts on “Is it time to peel back our provisions for parking?”