With the future of malls more uncertain than ever, it’s understandable that mall management must defy tradition now and then, if that’s what it takes to secure a tenant. Because these days it’s not about finding the right tenant; it’s about finding any tenant at all. America is already among the most over-retailed countries, perhaps number one in the world, and malls face hurdles from a multiple vantage points: 1) the mall simply isn’t the sought-after retail typology that it used to be; 2) the overwhelming consolidation of regional department stores leaves many large, second-tier malls hurting for an anchor tenant (like the Oxford Valley Mall that I covered a few years ago—still seeking a tenant for one department store); 3) this same consolidation means a huge portion of American malls have the exact same anchor tenants (J.C. Penney’s, Macy’s, Sears) so the malls are increasingly indistinct from one another; 4) internet shopping is making it harder for smaller goods-based tenants to justify expanding their locations. While shopping may still be a leisure activity for many people, that clientele doesn’t generate as much steady revenue as the people who know what they need, come to the mall, and promptly buy what they were looking for. The Internet has increasingly overtaken utilitarian shopping.

A densely populated municipality like Jersey City, with abundant views of the Lower Manhattan skyline, would seem an unlikely place for an eminently suburban-styled mall. But it has one, just two blocks from the Hudson River, in a formerly uninhabited railyard area now known as Newport, largely transformed by redevelopment initiatives that began in the 1980s. The Newport “neighborhood” today is a panoply of high-rise office and apartment towers, taking advantage of the easy access to Lower Manhattan on the nearby PATH rail line. I covered this less-than-vibrant district last year. And, in the center of it all, is the Newport Centre Mall. 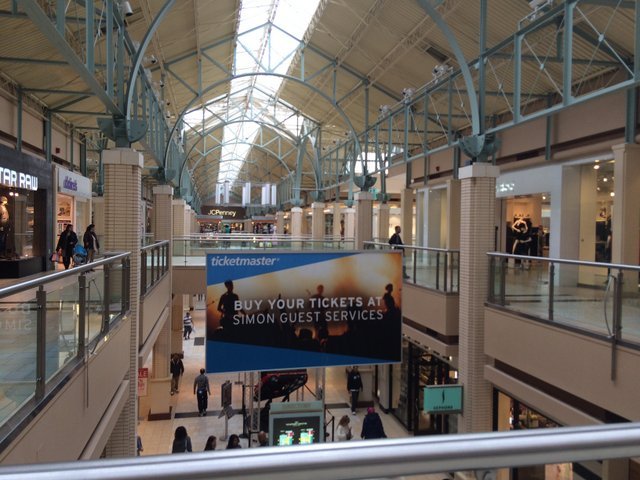 Built in 1987 when malls were still reliable retail stalwarts, this 1.1 million square foot facility probably seemed like a surefire bet for coaxing people back to a city whose historic commercial nodes had declined substantially. Compared to the revitalized neighborhoods of Jersey City,like Paulus Hook or the hip restaurants around Grove Street, Newport Centre Mall seems passé in 2015. But, as malls go in this day and age, it seems to be holding its own. 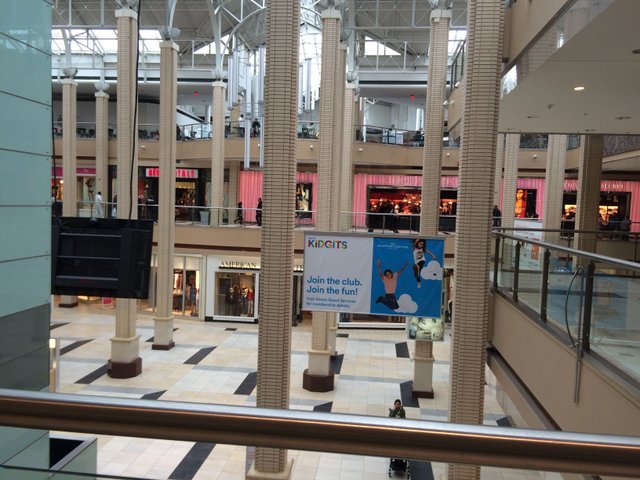 Unlike so many of its counterparts, all four of the anchor tenants remain occupied. Three of them are the stand-bys we’ve come to expect in about half of all the nation’s malls: J.C. Penney, Macy’s and Sears. The fourth—the real feather in the cap—is Kohl’s, a perpetually well-managed company that has avoided the lackluster financial performance of its competitors at Newport Centre. 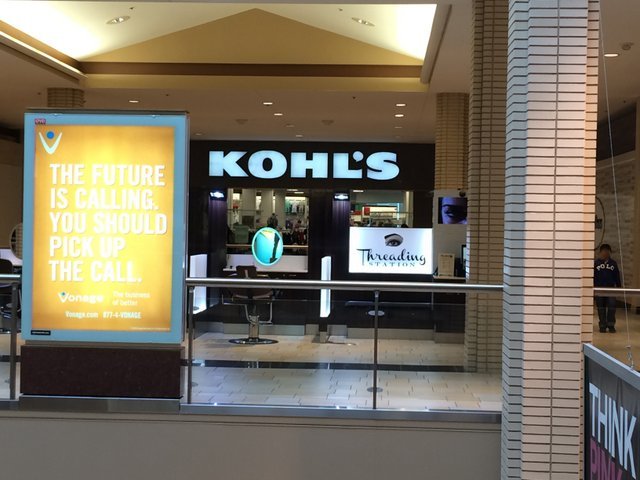 Why has Kohl’s chugged along, with even stronger performance than Target in recent years? It may have something to do with its tendency not to remain wedded to the mall typology. Kohl’s are more common in power centers, lifestyle centers, or even as anchor tenants in conventional strip malls. And yet here it is, in what appears to be a resolutely conventional mall, distinguished from most of its suburban counterparts only by paid garage parking and rail transit access. And the relatively uncommon Kohl’s.

Beyond that, Newport Centre Mall appears relentlessly average: about 10 to 15% of the inline tenants are vacant, which might have seemed like a red flag in 1990 but is normal by today’s standards. About 10 to 20% of the remaining tenants are names like this: 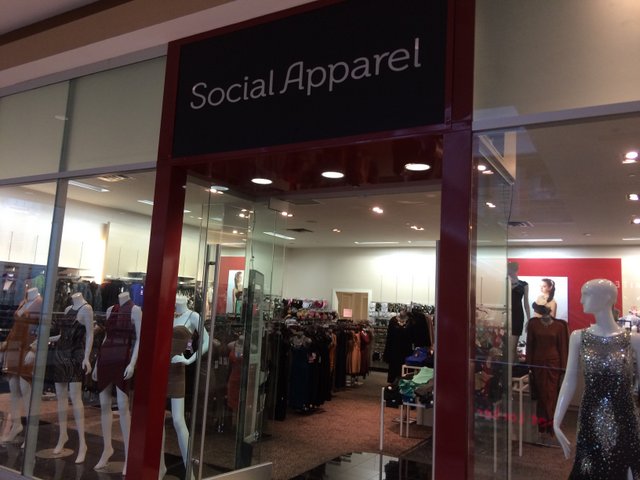 At least Social Apparel has a website, but, with only seven locations, all in the New York City metro, it clearly lacks national clout. While it’s better for a mall to secure a tenant like this than none at all, the over-representation of regional stores or mom-and-pops suggests that the management isn’t commanding the top-shelf leasing rates. It’s another condition of the 21st century mall: what would have seemed like an act of desperation among property managers in 1990 is pretty much the standard today.

So this nearly thirty-year-old mall is doing well enough, even with formidable competition among gentrifying neighborhoods nearby and a consumer base that one would suspect is much more supportive of urban-styled development than the typical American. It may have something to do with the managers. 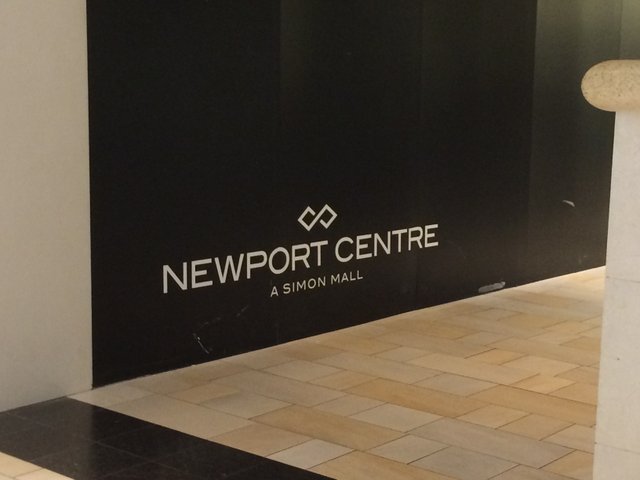 That’s right—it’s the quiet powerhouse that owns or operates over 200,000,000 square feet of retail space, mostly in North America and Asia. Simon Property Group is also the world’s largest Real Estate Investment Trust (REIT), and the market valuation of its assets is more than double the second largest mall manager, General Growth Properties (whose assets Simon intended to purchase a few years ago, then ultimately withdrew the offer). Regardless of what the consumer culture seems to be indicating, Simon Property Group has continued squeezing blood from a stone, finding the right mix of tenants to populate its malls, resulting in generally high occupancy levels across a mostly stable portfolio. 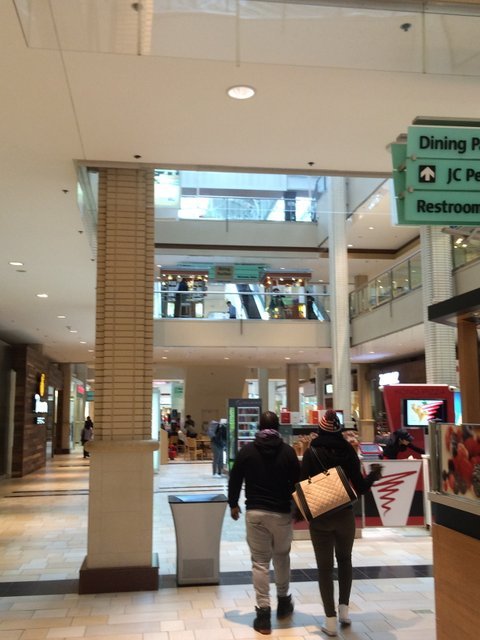 It’s likely that Newport Centre Mall wouldn’t fare as well under less capable management; then again, Simon has an embedded advantage with this location, because the mall also sits within a long-established Urban Enterprise Zone, supported by the New Jersey Department of Community Affairs to stimulate economic activity in long-dormant areas, generally formerly heavily industrial districts. The Urban Enterprise Zone reduces the state sales tax from 7% to 3.5% on all goods, with no sales tax on clothing. This feature undoubtedly impels people to shop at this particular mall, when they otherwise might go elsewhere. The tax break also makes clothing retailers in the mall particularly attractive. 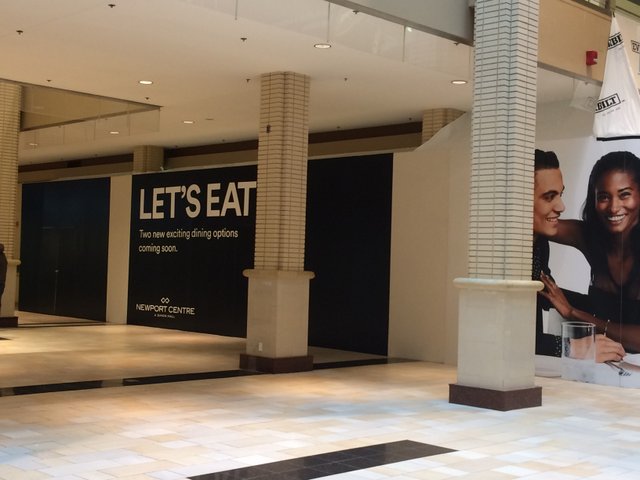 It’s the standard filler material for a vacant space.  But normally the emphasis is on shopping—a new name brand purveying clothing, accessories or home goods. Not this time. 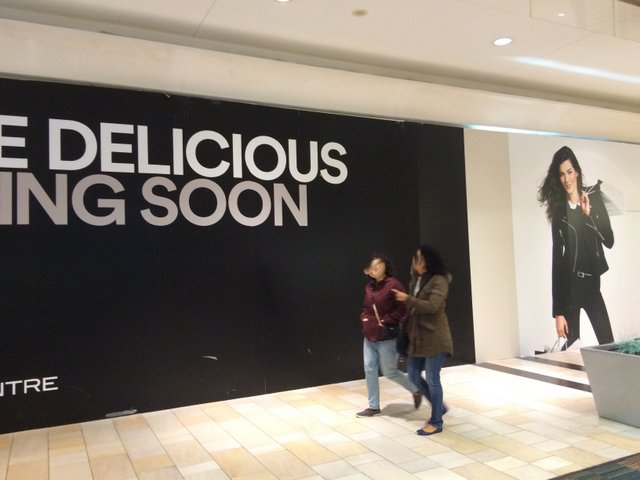 “More Delicious.” “Let’s Eat.” If it seems strange that they’re juxtaposing food terminology with people shopping—not to mention that one of the shopping archetypes sees to have 2% body fat—it only demonstrates how wedded Simon Property Group is to stock photos of beautiful people wearing black. But the language indicates that Simon is playing its hand by revealing to mall patrons that this is going to be a restaurant tenant. And, despite the fact the company has not disclosed the name of tenant on these murals, the reality is that the restaurant is going to be The Cheesecake Factory.  Beloved for its expansive menu and decadent portion sizes, The Cheesecake Factory is among the most sought-after mall restaurants, generally only leasing space at those that enjoy consistently high occupancy levels and sales-per-square-foot. It’s a mainstay at upscale malls. Bully to Newport Centre! It’s a testament to the The Cheesecake Factory, Inc.’s confidence in the mall’s performance (and Simon’s continued management of it) that signed a lease there.

But even more distinctive is where The Cheesecake Factory chose to locate. 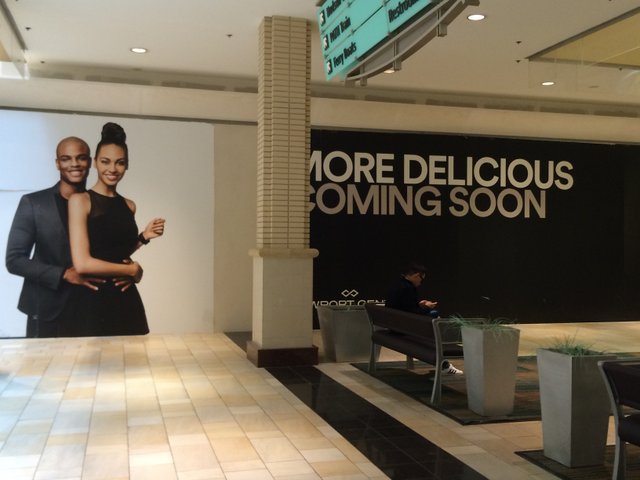 It’s hard to tell from the photos above, but this ground-floor site hardly wins any points for visibility. As a map of the mall indicates, it’s far removed from the other eateries in the mall’s food court, all ensconced on the third floor.   No big deal there—The Cheesecake Factory offers a different level of service than the fast-food offerings of a food court. But, at the very least, most sit-down restaurants in malls enjoy visual prominence from the outside, occupying a protrusion or critical corner that allows them the benefit of good signage and al fresco dining space. This Google Street View shows that the outside view of where The Cheesecake Factory will locate—on the first level, behind the wall closest to the Verizon van, surrounded on both sides by service entrances. Not a winning space. But the scoop from a local revealed that it will replace a bargain apparel store called Pay/Half that appears to have completely gone out of business, again suggesting a major upgrade for the Newport Centre.

This shift from clothing to a food may seem like a blip on the retail radar, but it likely foreshadows the future of leisure shopping. Even as old commercial main streets across America are revitalizing, the tenants increasingly focus on service-oriented establishments: spas, salons, holistic medicine, travel agencies, exercise studios, etc. And, of course—and probably most of all—restaurants. They’re all businesses that depend heavily on a human being to initiate a service as part of the overall transaction, which is a huge contrast from retail vendors that simply offer items to display and sell. Since the Internet has taken a huge chomp out of the consumption submarket, even malls are catching onto the type of tenants they need. The future is less likely to feature shopping plazas lined with The Gap, American Eagle, Forever 21, or Pacific Sunwear—not because they’re all going out of business (though some of the aforementioned probably will close) but because they no longer rely as much on bricks and mortar. Eventually, they may not rely on them at all. The Gap may purely exist an online fashion broker. After all, some retail institutions of yesteryear like Service Merchandise and Montgomery Wards have found a new life as distributors, more then a decade after closing all their stores.

If Simon Property Group is as shrewd of a company as it would like us to think it is, its property managers are just as attuned to a future where malls are a conglomeration of restaurants, salons, spas, and so forth, peppered lightly with other vendors…which is why The Cheesecake Factory is happy to take an obscure space in a mall with fierce competition elsewhere in Jersey City. It’s a smart move for the successful restaurant chain, not because it depends so much on malls, but because changing consumption patterns suggest the malls may soon depend on restaurants for shopping sustenance.

PrevWhy America deserves its retail blight.
Celebrating the most American game with an import.Next