Turning up the heat by removing the kitchen.

How do you know when a commercial area is—to use a phrase I hate—“going downhill”? Take a good look at who the tenants are. Sometimes it’s merely a matter of rising vacancy levels, but if the occupancy levels are high while those tenants are radically different from just two years prior, something’s afoot.

It’s usually easy to speculate that the overall assessed value of a property has diminished if the tenant changes from an operation with high or middle-value goods/services to one with only low-value offerings. If a building that, three years ago, featured Swarovski crystal in the window but now sells watches or costume jewelry made of fake gold, chances are strong that the building carries a much cheaper lease than it did in the past. This isn’t brain surgery.

But sometimes the new use of the property itself carries with it an intrinsically lower value, completely separate from the cost of the goods or services sold within. Take this example in downtown Wilkes-Barre. 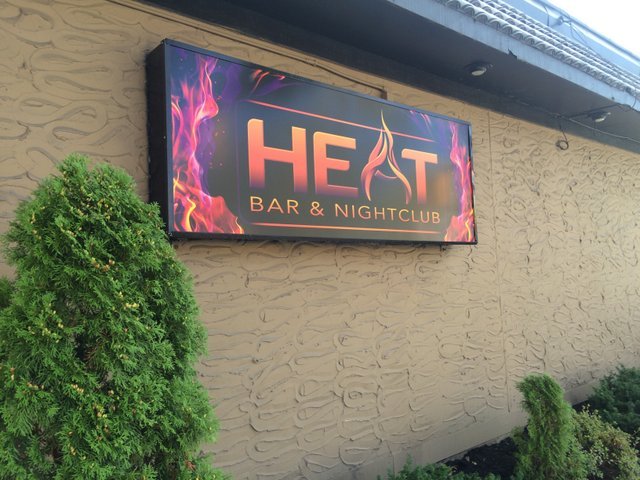 The Heat Bar and Nightclub sits just a little over a block away from the centermost square to this small city in northeast Pennsylvania—the side of downtown that seems to be enjoying less economic regeneration. As is typical of these enterprises, this nightclub doesn’t to claim much in the way of fenestration. 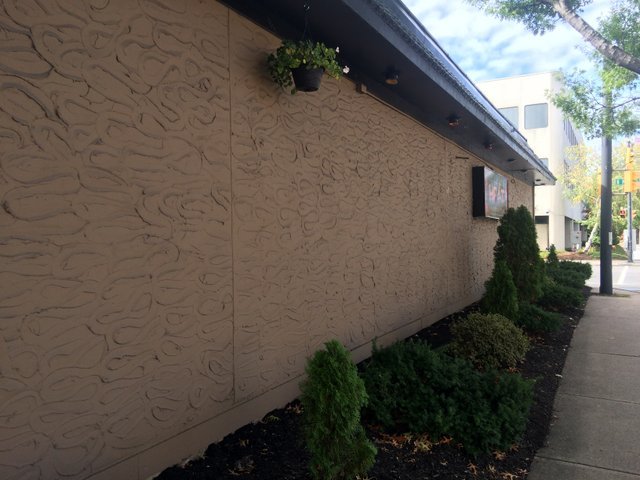 Here’s the view from the other street corner. 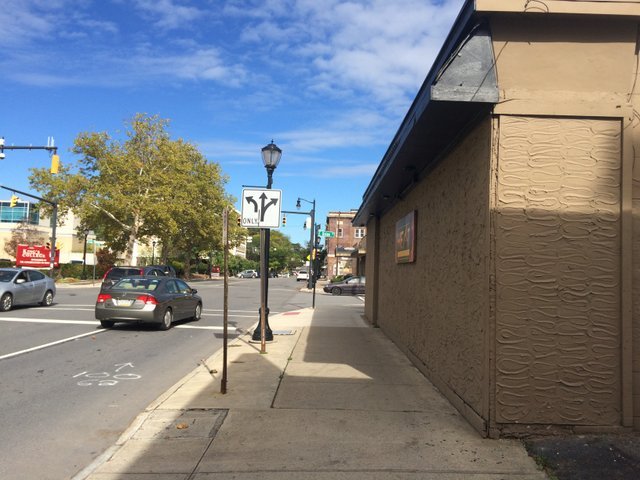 Lacking windows that allow us to peer into the interior, the building housing Heat Nightclub has minimal street presence. But perhaps it doesn’t need to sell itself on looks. If it’s like most nightclubs, it only needs to deploy a shrewd degree of crowd control, leaving people queuing at the door, and the presence of people lining the sidewalk is publicity enough. Beyond that, all it’s got are a couple meager windows and those two small signs.

But the real curiosities about this nightclub aren’t the obvious allurements, which no doubt are far more effective on a Saturday night when the students from nearby King’s College are in town. The subtler details are far more telling. For example, check out the main entrance. 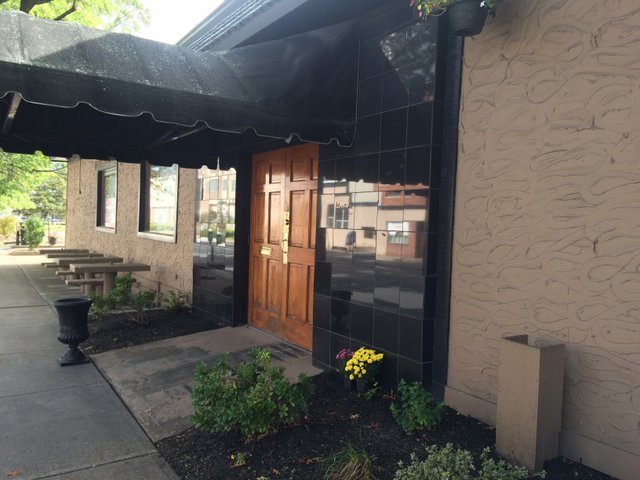 To the left of the door is a row of tables and chairs. Why would a nightclub need outdoor seating? Unless it’s for people to escape stringent smoking bans, who is going to be partaking of a nightclub’s offerings by congregating outside? (And besides, Pennsylvania doesn’t have statewide restrictions on smoking in bars—nor can municipalities past stricter laws than the statewide ban. The Commonwealth preempts them. So under most considerations, a nightclub in Pennsylvania could still allow smoking.)

A closer look at the doorway helps clarify why Heat Nightclub might have outdoor seating. 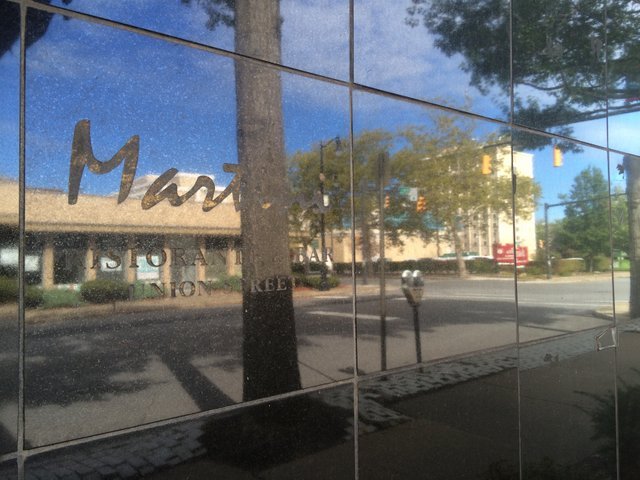 Etched into the polished ceramic wall is a previous tenant, called Martini Ristorante and Bar. It may not be the name of the establishment that immediately preceded Heat nightclub, but the proprietors clearly had enough invested into the building to etch the name onto the entrance. And the owners of Heat have not invested enough to remove it—or to include anything more than mountable signage.

But a non-action is an action itself, and the owners of Heat Nightclub consciously chose not to spend the extra money to remove those ponderous outdoor tables, or even to scratch off the name of a previous use. Why bother? After all, it’s a nightclub—a notoriously ephemeral tenant. In order to succeed, the owners of a nightclub must devise and manufacture a well-honed ambiance in perfect synch with the spirit of the time and place: the music, the lighting, the décor, the drinks, the tolerance for behavior that often pushes the legal limit. And the zeitgeist that propels the thumping beat of a long Saturday night is steadily evolving, from one weekend to the next. Before long—generally within a few years—the vibe that elevated a nightclub to the hottest weekend destination has turned passé, and most owners can’t shell out the continued money to modify their enterprise to render it relevant once again. Besides, by that point in time, another nightclub down the street offers potent competition. Thus, a nightclub’s lifespan rarely exceeds four years, and many are finished in less than two. Bearing that in mind, it’s hard to imagine most landlords actively seek one as a tenant; they prefer something with a little longevity.

To be fair to Heat and the countless other nightclubs out there, restaurants don’t have a much greater track record, though the conventional wisdom that 90% fail within one year is a bit hyperbolic. However, most research suggests that close to 60% of hospitality businesses fail within three years.  That said, those restaurants that don’t jump the shark often enjoy many years of prosperity, and the odds for a restaurant’s failure are greatest in the first year (25% closure rate) but diminish with each successive year. Some restaurants may build in popularity over time. My suspicion is that nightclubs’ failure rate only rises after the first year, and only a handful of the best-managed “evening entertainment ventures” stay relevant—and profitable—for a full decade.

The odds aren’t great for Heat Nightclub, and the investment in the façade (or lack thereof) shows clear signs of averting true risk. But further research on local media source Citizens Voice reveals that Heat also caters specifically to Wilkes-Barre’s LGBTQ population, which might be a feather in its cap—for a time. The fact that the nightclub deliberately appeals to a historically marginalized population helps to improve its chance of a built-in clientele it might otherwise lack. However, the cultural tides are shifting rapidly to the point that, across much of the country, LGBTQ individuals no longer feel compelled to hide their orientations, so the long-term viability of gay nightclubs remains dubious. Cities like Boston, the beneficiary of legalized gay marriage in Massachusetts long before the Supreme Court’s Obergefell v. Hodges, apparently saw a widespread decline in their gay nightlife offerings in the first decade of the 2000s—a nightlife niche that lingers in smaller, more conservative cities.

On the other hand, Heat Nightclub’s decision to operate in an urban, mixed-use setting could result in a higher-value, more stable use pushing it out before it even becomes a has-been. After all, while it’s not generally a good sign when a building that formerly housed Martini Ristorante becomes a nightclub, it isn’t entirely fair to brand downtown Wilkes-Barre as “going downhill” simply because of this downgrade. By most metrics—and typical of many cities its size—Wilkes-Barre already long ago went downhill and is now recovering, with clear evidence of reinvestment at various other downtown sites. 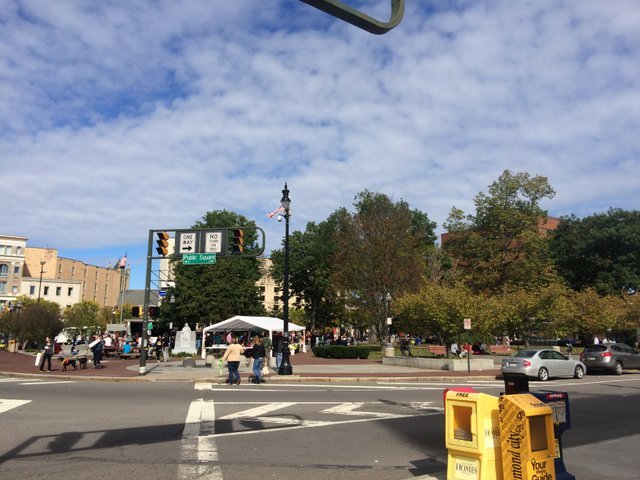 The before/after contrast is particularly visible in the blocks closest to Wilkes University, as well as the restoration of some unlikely buildings into apartments, like the bank in the photo below. 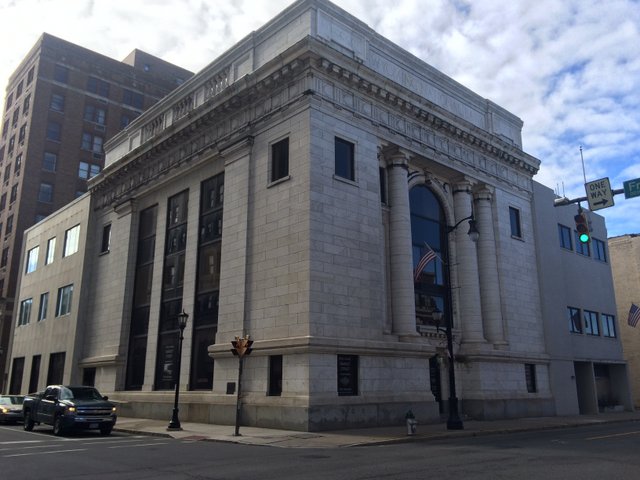 The fact that this Heat Nightclub building can’t retain a restaurant may have more to do with the aesthetics of the building itself than any countervailing conditions. Bloggers responding to the above Citizens Voice article noted that this building never seems to retain a tenant for long. That said, a revitalizing downtown such Wilkes-Barre’s offers more room for incremental shifts in tenant quality than a stagnant one, which the property owners will exploit upon whenever a better capitalized business owner steps in.

Five years from now, if downtown Wilkes-Barre continues its current regenerative trajectory, the Heat Nightclub building may again operate as a restaurant—but one where the owner voluntarily shells out the money to improve the appearance: more windows, a fresh coat of paint, the removal of any reference to the ancient “Martini Ristorante”. And, if the redevelopment persists to the point that the land’s intrinsic value surpasses that of the building, the market forces will push out all the nightclubs and the restaurants, demolishing what stands now, to make way for a taller, higher and better use—with maybe another restaurant on that first floor…or a really, really fashionable nightclub.

PrevCelebrating the most American game with an import.
MONTAGE: Teardowns: cleaning out the residential wardrobe.  Next