Celebrating the most American game with an import.

As I work on a lengthy, difficult blog article, I have to spice up the dead intervals with some observational posts that are quick reads (or at least they’re brief by my standards).

I know I can’t always get it right, but I’d like to think that at least a few times I’ve been ahead of the curve in witnessing some emergent cultural trends. For example, I remember devising the term popera to describe the sort of sanitized, studio-remastered, mass-market opera-crossover popularized by Andrea Bocelli and Il Divo (among many others) at least a year before the coastal media declared it a marketable term, though apparently not before the UK’s Telegraph excoriated the burgeoning sub-genre.

Two winters ago I first noticed the shifting seasonal prices for avocados, long one of my favorite fruits. I had always suspected it to be the case, but with a supermarket in Pennsylvania, it’s confirmed: 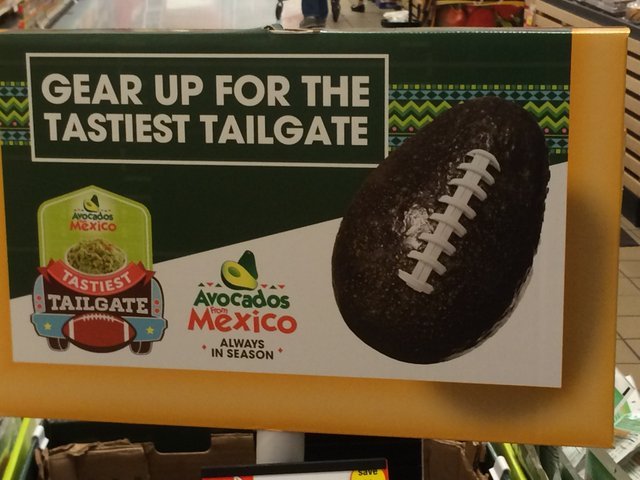 That’s right—as football season ramps up, the price for avocados goes down. And they’ll be at their year-round cheapest in late January and early February, right in time for the Super Bowl.

It should be obvious why. Within the last decade or so, avocados have escalated from a niche predilection associated broadly with Californians to a staple of supermarkets across the country. Some of this no doubt has to do with the prevalence of Latin-American immigrants in cities large and small, whose native countries embraced the fruit centuries ago. But now that Mexican cuisine is essentially an extension of American culinary culture (along with the other two in the trinity: Italian and Chinese), guacamole has risen from a popular side at Mexican restaurants to a party standard. Easy to make if difficult to perfect, it may now be just as popular as salsa as a condiment for tortilla chips, quesadillas, fajitas or a variety of other foods, all of which were foreign words to 95% of American as recently as 1965.

So the demand for avocados—and, of course, guacamole—reaches its fever pitch around the Super Bowl, when it has become as the de facto celebratory food on par with turkey at Thanksgiving.  It’s at least a little bit ironic, since, of all the major sports, American football remains the most resolutely American, at least in terms of the NFL recruiting almost exclusively domestically.  (Meanwhile, the NBA and MLB are growing exponentially more multinational; and the NHL has been that way for ages.)  Check your local supermarket in about two months: if it doesn’t offer a great deal on avocados, it’s missing out on the action. But does that mean we can find similar deals on tomatoes, cilantro, limes and scallions, or any other standard guac ingredients? Or tortilla chips, for that matter? If not this year, then it’s a matter of time before we see cartoon footballs next to the promo signs for those as well.