Tipping the hat to heritage.

It sneaks up on us again: a cultural curiosity in the most unexpected of places. And, as is often the case, the object in question is not an overt landmark. The setting this time? Lewes, Delaware. 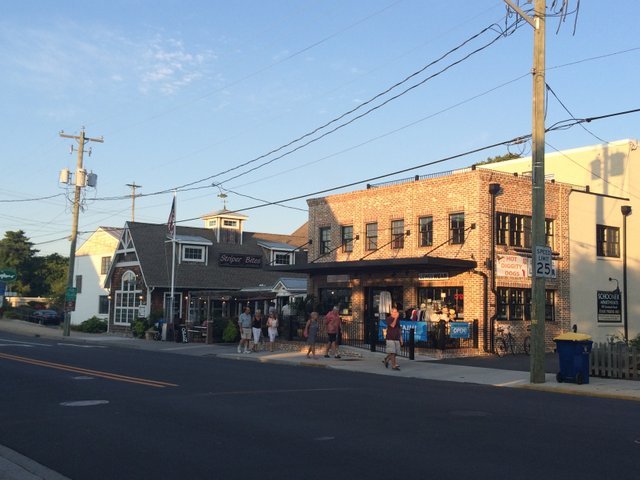 This town of under 3,000 people sits just northwest of the flourishing Delaware Beaches region—on the opposite side of Cape Henlopen, which separates the Delaware Bay from the Atlantic Ocean. Lewes brands itself as “the first town in the first state”, which on first blush is misleading, since Lewes hardly comes to mind as among the first North American settlements. But Delaware was the first state to ratify the Constitution, and Lewes is the site of the first settled area in what today constitutes Delaware. So the catchphrase is truthful.

By my estimate, Lewes has made tremendous strides over the last decade in establishing itself as a destination in its own right. The three-block Second Street, somewhat sleepy when I first visited in 2003, is now chock-full of specialty shops, boutiques and generally upscale restaurants. While much of State Route 1 from between Lewes and Rehoboth Beach is replete with strip malls, big boxes, huge parking lots, and all the other trappings of auto-oriented development, Lewes represents the Cape Region’s strongest, most intact historic town center. 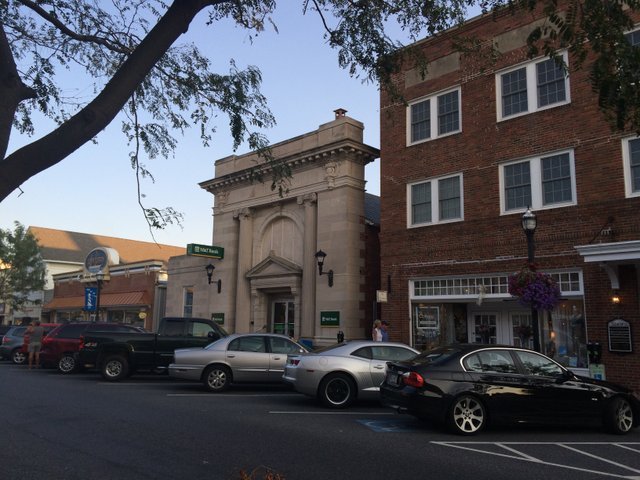 Lewes Beach, less than a mile to the north of the town center, is pleasant enough in its own right, but the Cape Henlopen calms the waters for Delaware Bay considerably, so tidal extremes are minimal. Vacationers seeking real waves prefer Rehoboth or Bethany Beach to the southeast; Lewes Beach is more of a kiddie pool. Despite the limited appeal of the waters, people still come to the City of Lewes in droves. With a variety of well-maintained residential districts surrounding its lively main street, it’s a great looking small town.

But the most striking building in Lewes isn’t on Second Street. It’s a block or two away from the town center. 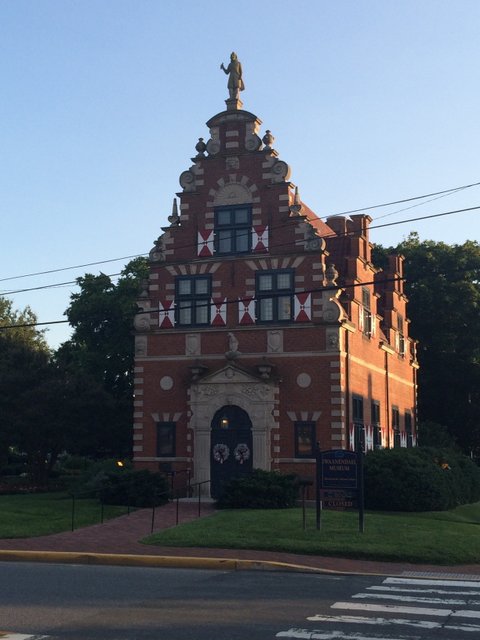 It’s an odd one. Juxtaposed with the more modest Federal-style architectural gestures that dominate the housing in Lewes, a building like this is inevitably going to stand out, regardless of where it’s situated. But it’s not just evoking a different time period; it’s an entirely different culture. And it’s one I’ve mentioned before. While the setting sun mutes a lot of the key details in the photos, it’s impossible not to notice that roofline. 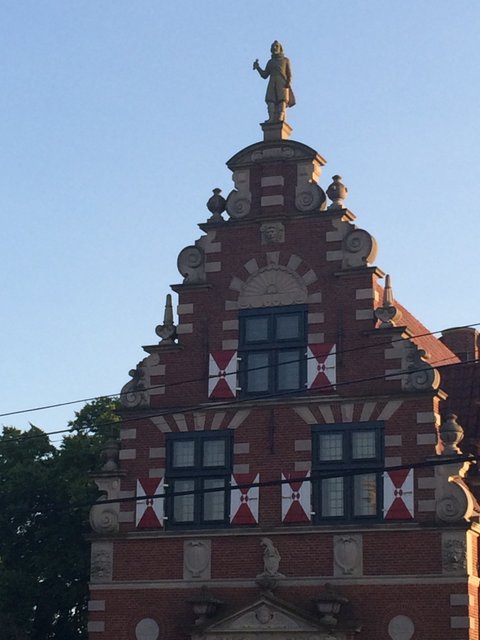 The jagged, stair-step shape to the gable is a trapgevel—a rare sight in the US but commonplace in the Netherlands. This isn’t the first time I’ve spied it: it’s common in Holland, Michigan (not surprisingly) , as well as DeMotte, Indiana, a town south of Hammond/Gary settled by the Dutch.  In general, the Dutch are not known for showy architecture, but trapgevel is a distinctly Dutch decorative practice with clear embellishments. This building will strike most visitors as the most garish thing for miles.

But why is it here in Lewes? The obvious conclusion, without even picking up a guidebook, is that the Dutch had some role in Lewes’s history, which this building commemorates. But what is it? 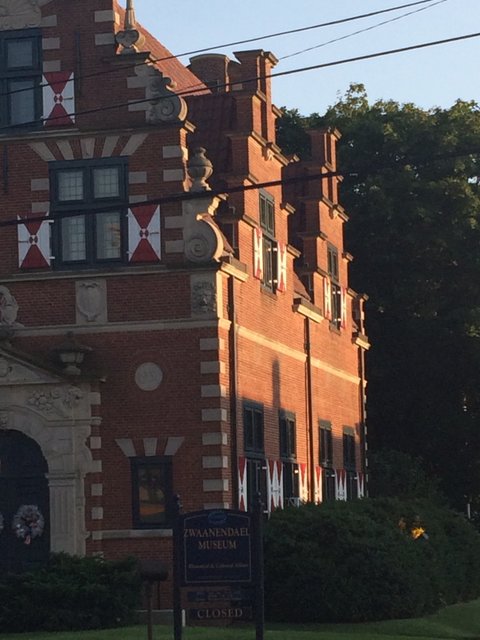 The sign, obscured by shadows, is barely legible, but it’s the Zwaanendael Museum, commemorating the name of the first settlement in what we now call Lewes. Thus, this town owes its “first town in the first state” soubriquet to the Dutch, whose Zwaanendael outpost in 1629 formed the southern boundary of the New Netherland Colony that stretched up into New Jersey, New York and Connecticut. The Delaware settlement was short lived: by 1632, Native Americans had overtaken it. Later efforts by the middle of the 17th century were more permanent, so that, by the time the English seized Dutch holdings in New Netherlands by 1664, southern Delaware was predominantly a Dutch-speaking area.

Today, the Cape Region and Delaware Beaches reveal few other vestiges of Dutch heritage. Unlike Holland MI or DeMotte IN, Lewes and its purlieus are not exactly replete with windmills, tulip farms, businesses with family names that end in “-hoek” or “-stra” (or begin with “van-“), or other buildings with trapgevel. One might then conclude that the Zwaanendael Museum is a historically significant pre-revolutionary building—the last surviving remnant from the old colony with which it shares its name. 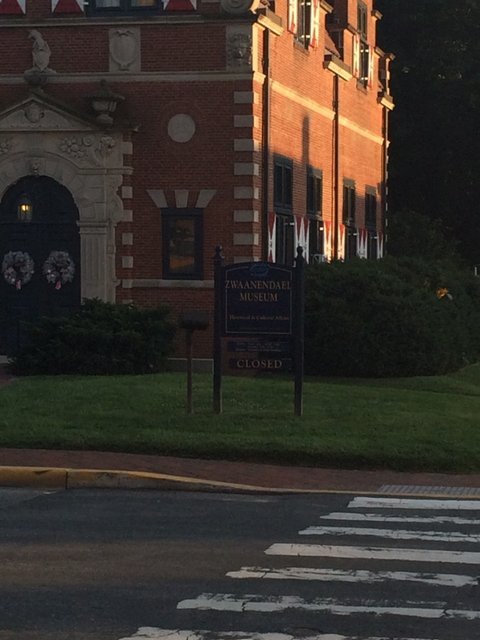 Civic leaders commissioned the building in 1931 to commemorate the 300th anniversary of the Zwaanendael settlement, carefully mimicking quintessentially Dutch architecture from the era of the New Netherlands colonies. Specifically, the museum serves as a homage to the town hall in the Dutch city of Hoorn. As indicated from a State of Delaware webpage (which also features photos of the museum with a more even distribution of light than I could muster), the building serves as a history center for Sussex County in general and Lewes in particular.

American standards for the National Register of Historic Places are relatively liberal, at least in terms of age. The Zwaanendael Museum is old enough that it could earn that pantheon. It hasn’t, although it is a contributing building in a state historic district. What’s most critical is that the rococo elements that make this building indisputably Dutch are not some sort of organic brainchild of early settlers. It’s unlikely that any of the individuals responsible for the monument trace their lineage to the settlers at Zwaanendael. (Alas, those settlers were most likely completely massacred.) But a group of civic boosters decided to engage in some research before creating the memorial; the result is modest attraction in a town with more than its fair share. Hats off to Lewes leadership for preserving this building all these years. It’s just as honest as a business from the Van der Leeuw family, but it’s far more likely to survive for generations to come.

PrevA little piece of heaven—with all the bells and whistles.
Dirt becomes a cover.  Next

2 thoughts on “Tipping the hat to heritage.”