Rising above the district dogma.

Normally I have come to the defense of historic preservation as a both a discipline and an economic development tool. But, inasmuch as I support almost any effort to cultivate, recognize and then save heritage, I also know that the most sincere efforts can go up in flames when couched in the liberal use of dangerous words like “always” and “never”. I qualify my support for any initiative, and sometimes that means identifying a context where it won’t play out successfully. Because—in true deployment of weasel words—almost nothing succeeds always.

Historic districts, when they’re effective, tend to wield a double-edged sword: they achieve or maintain a consistent aesthetic that is rarely possible elsewhere, but that same aesthetic imposes such rigid compliance that external modifications become nearly impossible. At this point, strictly enforced historic districts are enough of a novelty and rarity that they tend to retain value by coasting on that distinctive appearance. But how long before a district implodes under the weight of its own micromanagement—that is, what if the bubble bursts and demand drops because of a cultural unwillingness to compromise on heritage? What if people cease to value a district’s historicity, and no one chooses to live, work in, or care for the properties in that district? While many now argue that historic preservation is a backdoor method of gentrification, these same historic districts have not always proven effective at fending off blight in the past. I may be a poor soothsayer, but sometimes the best example of economic development in an otherwise threatened older neighborhood comes not from carefully orchestrated preservation but from the exact opposite: breaking those rules and letting the built environment breathe a little.

Here’s a perfect example in an otherwise unremarkable streetscape in South Philadelphia. 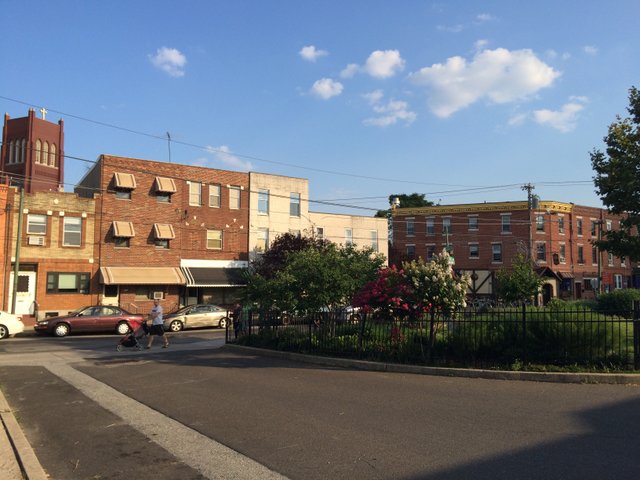 The fact that it’s unremarkable makes it much more effective. This sizable, mostly residential region within the city, bounded by South Street to the north and the city’s two principal rivers (Delaware and Schuylkill) on the other sides, contains four districts on the National Register of Historic Places—relatively few considering South Philadelphia’s size and the age of many of the buildings within it. But South Philly’s appeal has never been on the beauty of its buildings. While traditionally people have associated South Philly with its working class Italian-American neighborhoods, these days a pastiche of cultures animate the region just as powerfully: African-Americans, third generation Irish-Americans, young professionals, hipsters, immigrants from Mexico, Cambodia, Vietnam, and still quite a few Italian restaurants and storefronts. South Philadelphia did not endure the intensive population loss that one encounters in West Philadelphia or (particularly) North Philadelphia. At the same time, South Philadelphia also lacks the sort of architectural details that distinguish the housing in the large districts to the west and north; most homes in South Philly are comparatively prosaic and unadorned. The region is no stranger to historic events—enough to help justify the listing of 54 individual structures on the National Register of Historic Places (two of which are National Historic Landmarks). But nondescript, humdrum architecture usually helps weaken any argument in support of a historic district.

At the same time, the absence of any overriding protectionist culture helps to foster something like this. 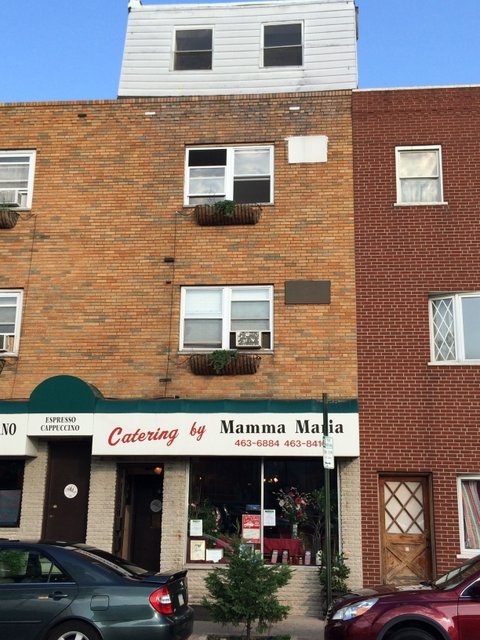 The owners of this hybrid storefront/rowhome decided that they need a little more space. Hemmed in by their neighbors to the left and right, their only option was to build upward. Across most of Philadelphia, their constraints would be mild. Zoning regulations might limit height, but it would always be possible to pursue a variance. Building codes could regulate the massing and interior layout to preclude some structural compromises, and while it’s unwise to attempt slide past the statewide Uniform Construction Code, it’s also likely in this case that no facial prohibitions apply.

Meeting the standards of a historic preservation commission would be another story, though. Those are the enforcers with real teeth. Can we imagine what they’d say about this block of homes? 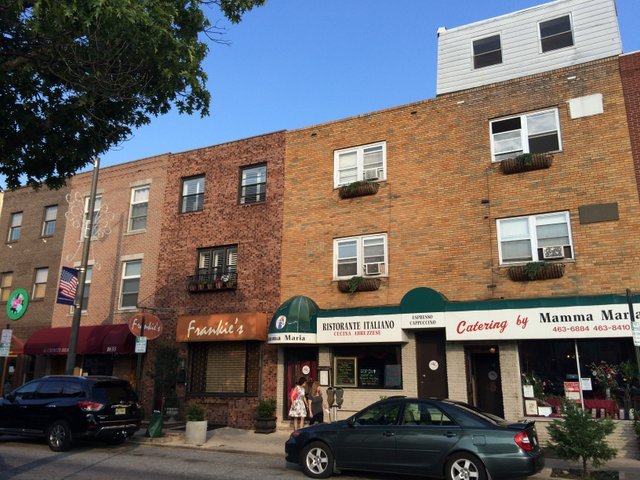 Look how much our four-story home sticks out.  Nothing about this addition to the home aligns with the existing architectural vernacular, nor does it make any effort to conform to the appearance of the neighboring properties. It does the opposite. Utilitarian, but aesthetically oblivious. If this were a historic district, the preservation commission wouldn’t entertain such a proposed modification. It would get rejected.  Design review boards routinely dictate window treatments, gutter/drain spout design, historic accuracy of the paint color, glass thickness, possibly even viability of the landscaping. Granted, a prospective homebuyer in a historic district is usually well aware of these rigid standards and respects them, recognizing that enforced consistency can improve the value of the properties in aggregate.

But the residents of South Philly could never tolerate such impingement upon property rights, not only because it’s difficult to conceive of a context in which the rowhomes in the photos above would constitute invaluable architecture, but because the locals actually depend on flexibility to market their homes. In a neighborhood like this, if the people can’t modify, they cannot sell. Attached housing in America generally struggles when up against its detached counterpart; cities like Philadelphia, where rowhomes predominate, lost scores of units during the mid 20th century de-industrialization, partly due to job loss, and also because they could build detached housing in the suburbs, generally perceived as much more modern and desirable. In the more fashionable old parts of Philadelphia, even the modest trinity-style rowhome has enjoyed a new lease on life, but largely because the gentrifying purchasers alter the bejesus out of it, modernizing the window treatments, punching out skylights, adding decks on the back, maybe even installing a chimney (if building codes permit)—all things that would be verboten if this were a historic district. It may even be one of the new yuppie arrivals to South Philly that perched that fourth floor onto the rowhome below.

Ultimately this speaks heavily on the compromises necessary to perpetuate economic activity in vulnerable urban areas. As I blogged a few months ago, Jersey City had to enlarge hundreds of window apertures to bring a long-vacant century-old industrial building to viable reuse as luxury apartments, and, in doing so, abnegated the factory’s viability as a historic structure. It wouldn’t surprise me that activists in some areas of Philadelphia resisted historic district designations that they perceived as inhibitory to the sort of investment-by-modification that they were most likely to attract. That, and they might have just wanted to give their distinguished Victorian a mid-century vinyl baseball cap.

2 thoughts on “Rising above the district dogma.”