I’ve been hesitant to post this article, because it could easily appear like an indictment, especially considering I have not blogged about Manchester before. So, before I get too far I’ll continue with these two mitigating disclaimers: 1) what I’m observing could just as easily be on display in any other downtown, and 2) I have every intent of featuring a lengthier, more thoughtful look at New Hampshire’s largest city in the very near future.

At a prominent intersection in Manchester’s downtown, in northwest the corner of Veterans’ Memorial Park, a small building hosts the Welcome Center, and in that center hangs a promotional poster for the city. 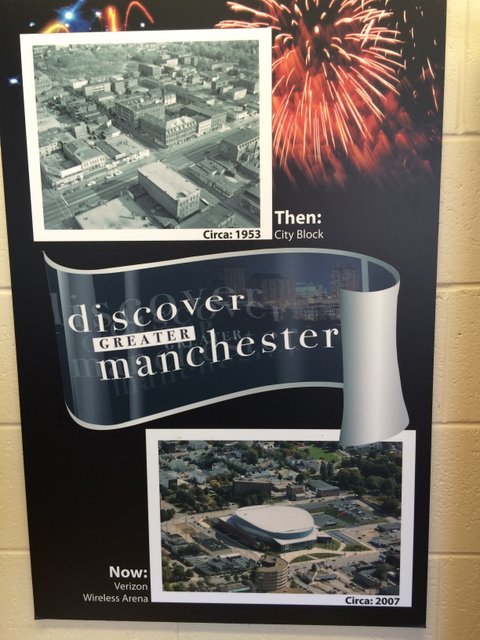 It’s a perfect example of WYSIWYG: we have a before/after view of Manchester’s skyline, the 1953 image providing an almost isometric perspective of a primary arterial, flanked by muscular, low-rise 19th century buildings. Nuance is absent here. 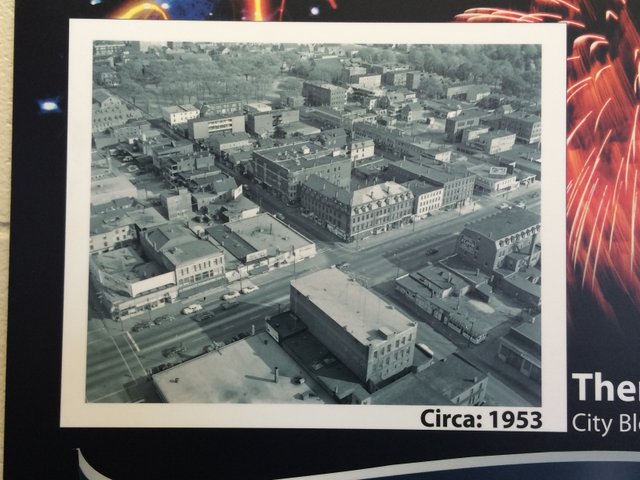 Meanwhile, the 2007 image provides a downtown in color, at a much more oblique angle than its mid-century counterpart. 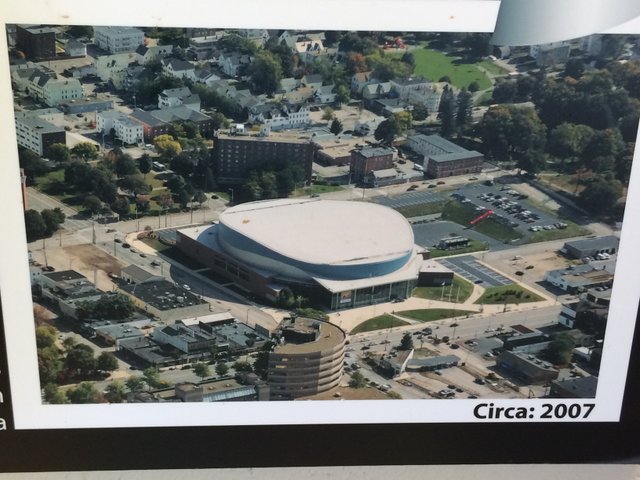 Are they even the same place? It requires a fair amount of scrutiny, but I was able to pinpoint one prominent building that the two skylines share, highlighted in purple below: 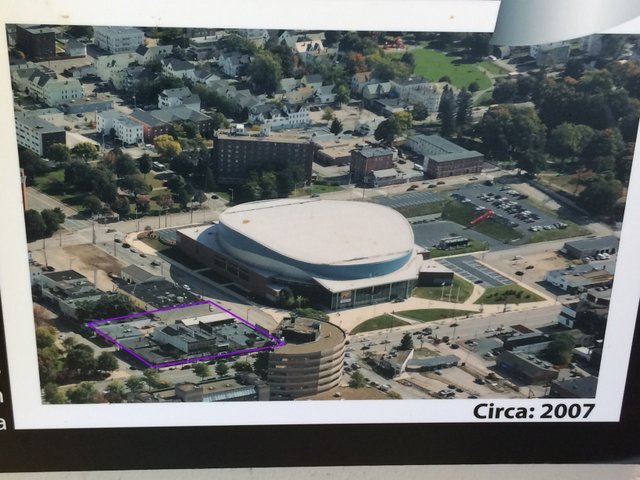 Yes, they more or less capture the same portion of downtown. Yet they also offer profound evidence of how little of the building texture survives sixty years later. Not only did the Verizon Wireless Arena replace the hulking Zayre’s department store from the most prominent block in the 1953 photo, but a vast stretch of parking lot comprises the remainder of the superblock. And more than half of the structures depicted in the earlier photograph seem to have faced the wrecking ball—victims of the urban renewal mentality that seized downtown activists in the 1960s and 1970s.

One might expect to encounter such a photo juxtaposition in local historical societies, libraries, and books that intend to chronicle the decline of American downtowns. In this day and age, it’s less common to see it as a promotional tool in a tourist information center. To be honest, it’s weird. Apparently someone with the Manchester Chamber of Commerce decided these comparative photos show Manchester’s ability to adapt to changing needs. No doubt that’s exactly what some visitors to Manchester are seeking: a clean, modern city free of underutilized, obsolete buildings, with easy access to parking. But that’s not what most downtown promotional organizations have determined is their key selling point. These days, the more stereotypical image is a streetscape, where invigorated historic buildings help to animate sidewalks replete with pedestrians—like the photo on this webpage, showing dining options. And that image is fine and good—albeit a little clichéd by this point—but scroll down on that same webpage, and what do we get? An overhead view of a mall department store, in keeping with New Hampshire’s broadly embraced identity (at least in New England) as a haven for tax-free shopping.

Fortunately, despite the evidence of widespread demolition around the site of the Verizon Wireless Center, downtown Manchester still offers plenty of well-preserved old blocks, as well as a fairly active hub of restaurants, retail and nightlife, complemented by daytime office/commercial activity befitting the state’s largest city. But this begs the question: why would the Welcome Center capitalize on a before/after dichotomy that, based on what currently gravitates people downtown, largely conveys an image antithetical to what a city would try to promote? Does the Verizon Wireless Arena, probably among the largest entertainment venues in the state, really need to occupy such a prominent place in a downtown aerial photo? Doesn’t it speak for itself?

A widespread, deep-seated sociological imbroglio—the fact that we bulldozed so much of our downtowns—demands a simple, cost-efficient solution. All the Chamber of Commerce has to do is reorient its lens to a portion of downtown Manchester that still shows commerce, activity, and density. Fortunately, for Manchester, it doesn’t require a great deal of camera trickery; the same can’t be said for the pockmarked downtowns in numerous other American cities.

PrevPassing the bar exam with flying colors.
A little piece of heaven—with all the bells and whistles.Next