Whenever we encounter an odd pairing—anything, really—it’s hard not to ponder how the members of the unlikely duo found one another. The way they engage the senses, or maybe just one sense, is unexpectedly symbiotic. Like when the zing from spicy Buffalo wings gets muted by the buttermilk in blue cheese dressing, usually abetted by celery-flavored scoops. Or how the inchoate melancholy of Samuel Barber’s Adagio for Strings, which rarely lingers on a minor chord, somehow morphs to something meretriciously affirming when subjugated by a monotonous trance beat from William Orbit or Tiësto. They don’t seem like they should work, but clearly a common denominator has decided that they do.

My latest trip to Seattle treated me to a comparable serendipity, not surprisingly (this blog being what it is) in the form of land use. At first, it looked like a modest little law firm in a distinguished old edifice in the Capitol Hill neighborhood. 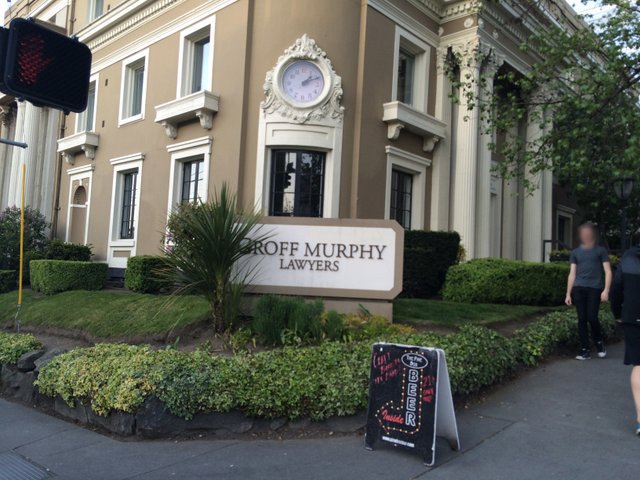 And that’s what we see in the photo above. But what about that little sandwich board on the sidewalk? It says “beer inside” and points to the left, so it must be another building a little further down the block, right? Wrong. 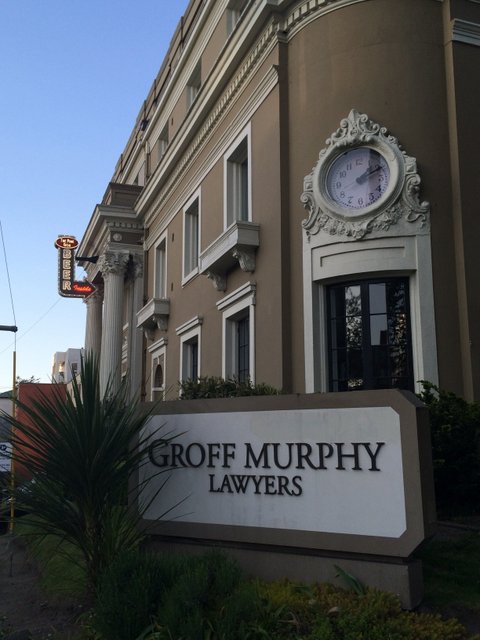 The Pine Box, which occupies the northern third of this anomalous building, identifies itself as a bar and public house, emphasizing drinks (and especially beers) over the numerous small plates that it serves. And, while it’s a relative newcomer, the preceding use also emphasized libations under the name of The Chapel Bar.

So, essentially, this building has consistently housed legal services (an office or commercial use) along a restaurant/retail use that requires a liquor permit to operate. Nothing fundamentally wrong with this. So why does it seem so strange?  Maybe I’m just sheltered, or maybe such a pairing is common in the western US—a region with which I’m largely unfamiliar.   Or maybe the managers of the property have shrewdly exploited a loophole in land use regulations. Is Seattle more relaxed in its zoning, allowing for strange bedfellows when other cities restrict it?

It’s not necessarily that simple, or at least not that type of simple. Like most major American cities that have revamped their zoning ordinances in recent years, Seattle has steered its regulations away from conventional Euclidean zoning (i.e., prescribing commercial, residential, industrial or other uses b geometrically defined districts) to more form-based regulations (in which the standards allow for a flexible blend of uses by defining the physical form of the buildings themselves, which can in turn dictate density of activity and intensity of use within them). A quick glance at the citywide generalized zoning map suggests that the Seattle largely endorses a form-based approach while still employing some of the Euclidean use-based fundamentals, like industrial, major institution, or commercial.

Meanwhile, a perusal of the textual zoning ordinance may shed some light as to why we have encountered this strange juxtaposition. But it just as easily might confirm nothing—other than the clear implication that anything not overtly prohibited is thereby allowed.   However, if that’s all it takes, why is the combination of the Pine Box and Groff Murphy Lawyers such a strange sight?

Chances are, the most effective detective work owes more to a bottom-up framework and far less to the top-down approach endemic to zoning. After all, the old building at 300 East Pine Street didn’t just emerge as a law firm/bar simply because the zoning told it do be that way. It’s a former mortuary, redeveloped by a lawyer at Groff Murphy who historically purchased neglected properties in undervalued neighborhoods and redeveloped them to target innovative entrepreneurs.  While there can be no doubt that this particular lawyer demonstrated considerable savvy at assessing older properties for their potential, it helps that it’s also a focus within his practice, as well as Groff Murphy as a whole, which promotes itself under three primary specialties: construction, government contracts and real estate.

The truth here may be far simpler than anything a zoning code mandates.  It’s a grassroots adaptive re-use.  The attorneys at Groff Murphy saw a building that they liked, a few of the partners (or maybe just the one) redeveloped it; they moved in, then leased the remaining space to any entrepreneurs whose vision they could support. From a property manager’s perspective, it is probably more time consuming to find a bar/restaurant tenant that needs a far different array of kitchen infrastructure (not to mention a variety of different permits) than a typical, conforming office/commercial tenant. But Groff Murphy decided it was not just right for them, but for the image the firm wanted to convey within the Capitol Hill neighborhood as a whole.

Clearly at this point I’m fully invested in this hypothetical that could be completely off base. But this quirky pairing only turns heads because it occupies a modest structure in a generally low-rise and mid-rise neighborhood. Just a mile away, in downtown, Belltown or Pioneer Square, a law firm could easily occupy a floor of a skyscraper, while the first floor is devoted to a hip new brewpub. And no one would think twice of it…including me.   In fact, virtually every city probably has a bar and law firm under the same roof, in a multi-story commercial building in the heart of the central business district. Thus, the land use combination is distinctive not because of the pairing itself so much as where the pairing takes place. A smaller building is much more of a glass house, in terms of both the type and the intensity of uses. It could prove a liability, if NIMBY neighbors remonstrate against an overconcentration of a LULU (Locally Unwanted Land Use), thereby putting the kibosh on a bar/law firm combo that would go unnoticed in a much larger building. But in a devil-may-care nabe like Capitol Hill, the property managers can flaunt their combination of business under the same roof with pride. And the lawyers don’t have to step out into the rain if they need something to wet their whistle.

PrevHate your neighbor? Groom your hedge.
Time heals non-organic wounds too.  Next