A little piece of heaven—with all the bells and whistles.

In this day and age, with throngs of Baby Boomers approaching and entering retirement, quite a few are inevitably seeking to downsize from the comfy, commodious single-family detached homes where they raised heir kids. Some have already scaled back, and the exodus will only continue in the years ahead, as this unusually large and influential generation scouts smaller properties that require less time and effort to manage. It goes without saying that many of these downsizers are hoping to reduce their cost of living in the process.

If a land developer, in building a new housing development, works in a market that is highly sensitive to price (and most are), he or she will naturally feel pressure to find innovative ways to lower the up-front costs. Among the easiest tactics is to choose tracts of land that other residential developers have shunned—tracts that may be well-located within the metro but have remained fallow over the years, even as other subdivisions have sprung up in the vicinity. Perhaps the tracts are too small; perhaps the shape is too unconventional, or maybe natural features (topography, hydric soils, floodplains) pose too great of a barrier. Chances are the value of the land on a per-unit basis is lower because of these impediments. At the same time, with the right engineering, a good site plan, and a market-savvy homebuilder, the right development could prove a goldmine.

So how to overcome these hurdles? A relatively new townhome development in a suburb of Louisville (on the Indiana side) offers an example, building on a seemingly unbuildable tract.

I’ve outlined the original parcel in purple. It’s not horrible—at least it’s not a “flag lot”—but the unusual chevron shape doesn’t make it amenable to a conventional grid configuration. And if the streets have to meander in unorthodox arcs—the curvilinear approach, which, while marketable, is generally less efficient—the ensuing shape of the lots is also likely not to fit a conventional mold, meaning they’d be harder to sell, and it could result in a few scraps of land that are simply too small or too irregular to market. It becomes a zero sum game.

But the developer of Pickwick Commons clearly found a way to make it work. 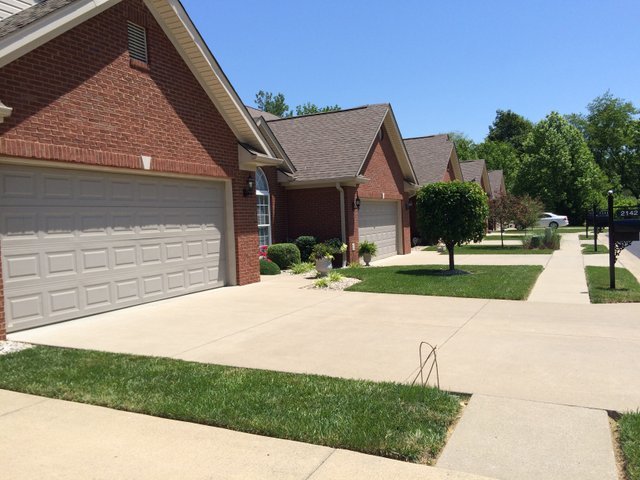 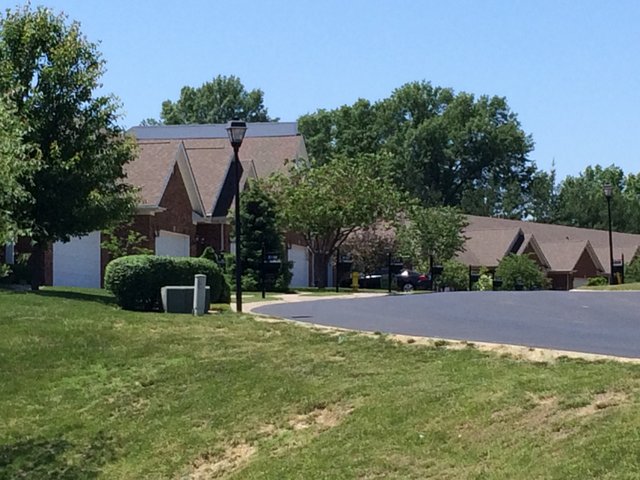 It’s an age-restricted community, targeting healthy seniors (often married couples) who do not need on-site medical support. Better known as “active adults”. The units are townhomes, managed by an association so the residents don’t have to care for the common space or their lawns. And, as the photos indicate, the residents don’t have much in the way of front yards; it’s almost all driveway. Sure, we could cavil about the auto-centric nature of this development, and how, as a result, the façades of these townhomes feature garages as the primary feature. But the target demographic for these townhomes is a car owner who is perfectly prepared and willing to drive to get anywhere. And placing the property under the stewardship of a condo association is the best way to ensure that the units themselves get sold. The residents don’t have to do anything to the land, so it doesn’t really concern them about unusual property lines. And it gives the developer a wide berth on how to treat any common open space, which is the real achievement—and Achilles’ heel—of Pickwick Commons. 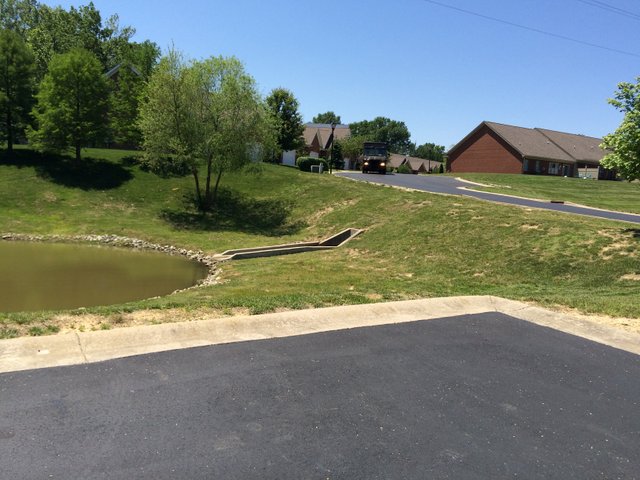 Nestled between the northern and southern cluster of townhomes is a small pond. 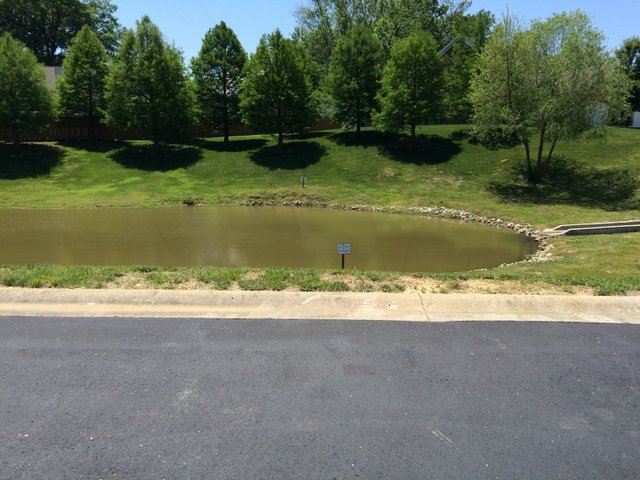 Was it a naturally occurring feature? Not likely. It’s a detention pond—part of the stormwater management design for the unit, mitigating flood in the event of a torrential downpour, which could pose a problem either to these townhomes or adjacent properties at a lower elevation. Notice the drain that empties to the pond on the right side of the photos above. Runoff needs a place to go. After all, the impervious surface cover of the land is much greater, now that Pickwick Commons is largely complete. Not only the rooftops of the homes, but the streets and the ample parking along the streets means that most precipitation has very little opportunity to percolate. 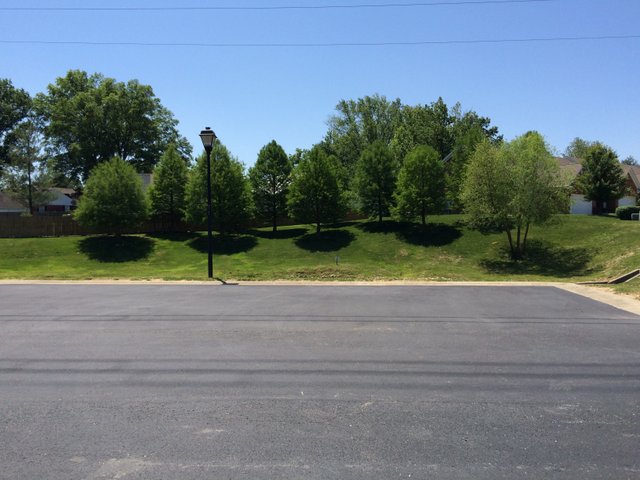 The pond isn’t a beauty, but it’s not awful either. You really have to ponder over it to determine that it is, first and foremost, part of the infrastructure. Because it separates the northern and southern phases of the townhomes, it essentially operates more as shared open space.

So does the grassy patch on the other side of the street from the detention pond. There’s not much to it, but it does feature a continuous stretch of manicured lawn. Much of it consists of a slope at (my guess) between 8 and 10% grade, which harbors a drainage culvert that leads to the detention pond. 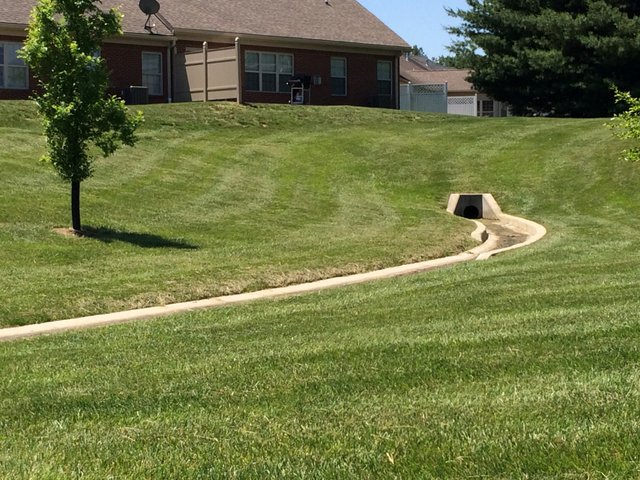 As for the portion of the mini-park at closer to 0% grade, it’s little more than a winding path that terminates at a picnic table amid a circle of rocks and shrubs. 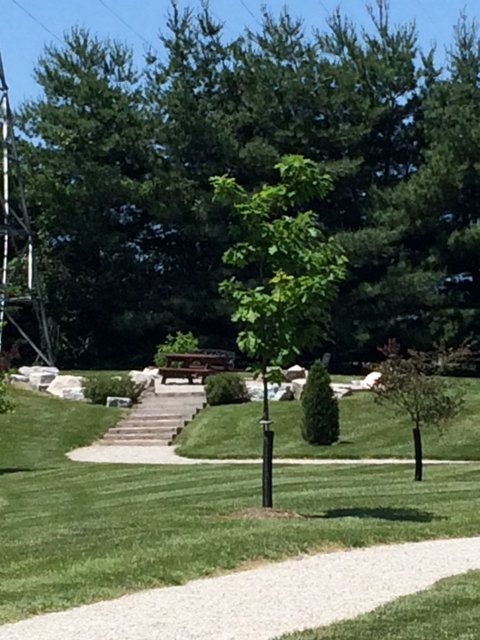 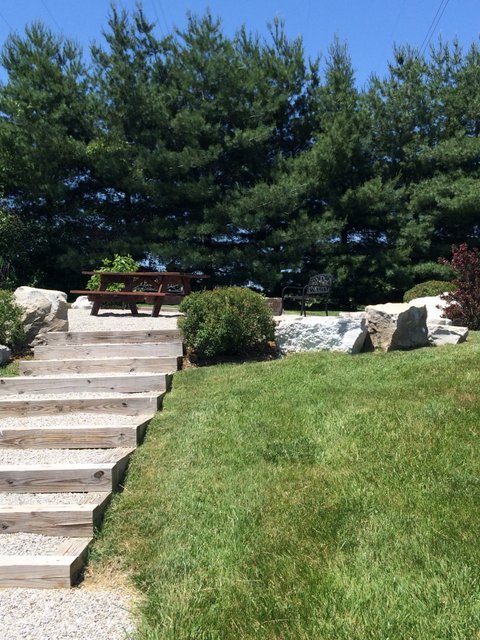 And in each of the preceding photos, I tried my hardest to crop out two mammoth features that flank the picnic table. They’re much easier to see in the photo below, in landscape view: 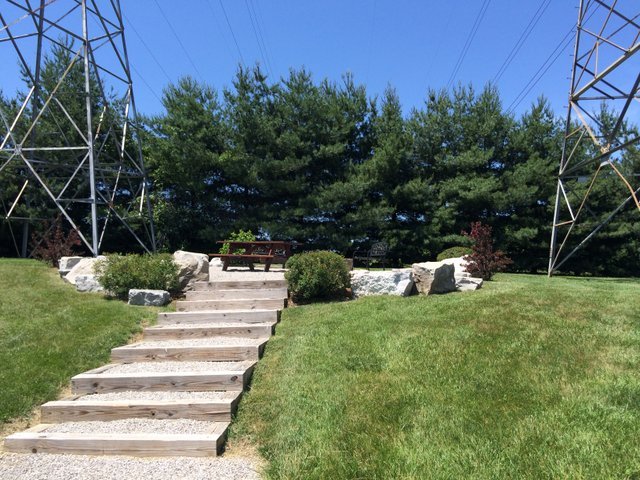 The main reason this strip of land between the northern and southern phases of Pickwick Commons remains open space is because it is also part of a utility easement. Power lines stretch across the entire site, along with their hulking suspension towers. And they continue well beyond the boundary of the tract. 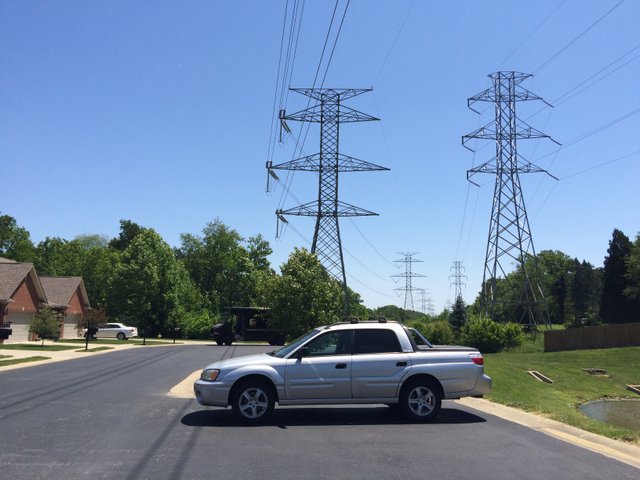 The blue line on this map shows the general path of the power lines, revealing how they bisect the subdivision as a whole.

Naturally these power lines predate the development, possibly by decades. They may have been a bigger impediment to development than even the strange chevron shape. After all, land directly underneath these power lines is not likely very marketable for residential development—and it may be outright illegal.

Thus, no matter how seductive the purchase price for this conveniently located piece of land may have been, its challenges nullified much of its allure. In many respects, it’s a price reduction for “slightly damaged goods”: about one-third of the acreage is unusable. Bearing that in mind, the developer would have to cram more housing units into the residual in order to turn a profit. But most people in this part of New Albany aren’t seeking high-density, multi-family housing. (Most people in New Albany aren’t seeking high density housing in general.) So the developer found a niche: age-restricted housing where the owners/occupies lack fee simple possession of the surrounding land. The fundamental character of the property matters little, because the owners of the residential units have no interest or investment in what would constitute yards. A few of the owners have negotiated tiny garden plots for personalized landscaping, but none of them have grass to mow. And if they ever crave a big open lawn, they have this space: 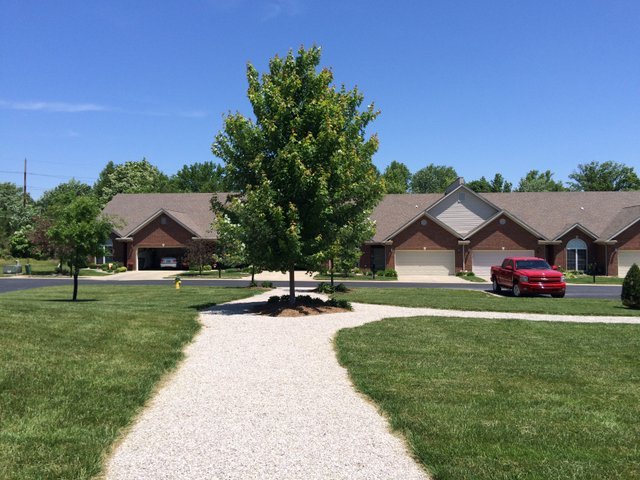 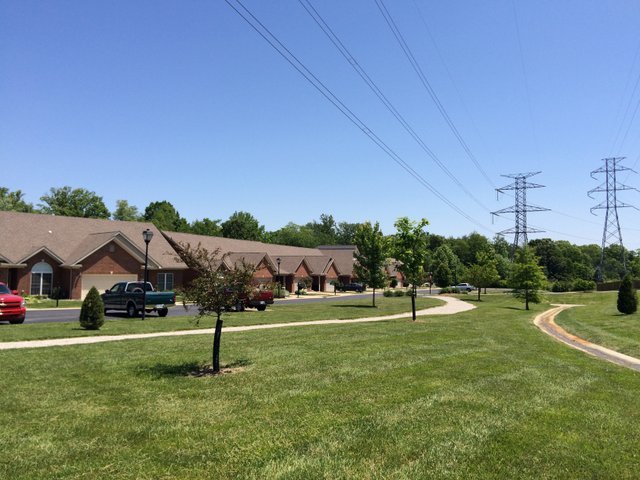 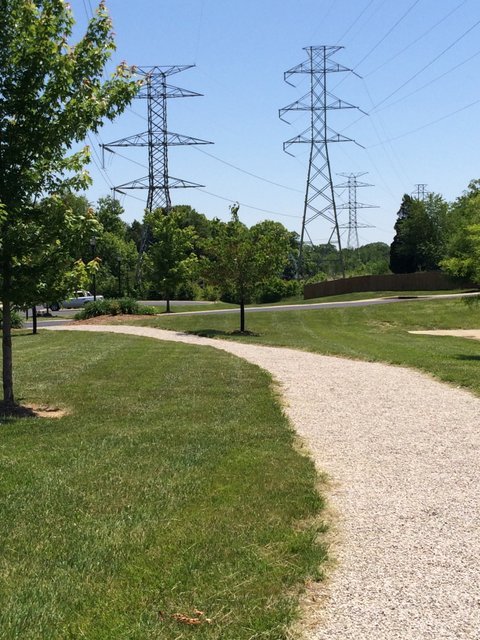 It may not be much, and I can’t imagine too many of the residents of Pickwick Commons ever using that picnic table, let alone inviting the grandkids over to kick around a soccer ball, with those utility poles presiding over everything. But at least the developer found a way to aestheticize some land that serves as little more than infrastructure. The layout at this subdivision raises a simple, fundamental question: did this land constitute part of the developer’s open space obligation? In this day and age, as residential developers have sought to harmonize the widely touted American dream of single-family detached housing along with fundamental affordability, they have learned that large lots are not always essential, especially for households with more moderate income. First and foremost, aspiring homeowners—frequently young families—tend to seek a suitably sized house, and while a big yard is great, it isn’t the sine qua non one might expect. Far more important is the right number of bedrooms, a big open great room, abundant closet space, and a two-car attached garage. Huge back yards are lower on the totem pole; spacious front yards even further down. Medium-density developments are easier to sell than costly, large-lot, low-density developments. Thus, many municipalities have sought to ensure value in new subdivisions by mandating at least a certain degree of open space—a sort of mini-park allowing for passive recreation, with potential jogging paths and maybe enough manicured lawn to throw around a football. After all the housing units are complete and occupied, curatorship of this shared open space generally passes to a homeowners’ association; on rare occasions the municipality might claim it as a public park.

In a case like Pickwick Commons, the developer provided open space between the northern and southern clusters of townhomes, right under the power lines. In many municipalities that mandate open space development for new subdivisions, this might pass muster—it could count toward open space, along with the nearby retention pond. At least at Pickwick Commons, the developer managed to make the space reasonably attractive and fundamentally useable. But many local governments have found that their open space requirements, embedded in their zoning and subdivision ordinances, lack specifications on what constitutes permissible open space. Mega-devlopments have received municipal approval, where most of the “shared open space” consists of an ugly concrete retention basin, rocky drainage swales, or unusable turf around power lines. But the municipality had no choice but to approve, because its own zoning regulations were insufficiently stringent about what the definition of open space could not include. The developers weren’t breaking any laws, and they built the mandated open space. But who is going to gravitate toward a park that’s filled with these things? 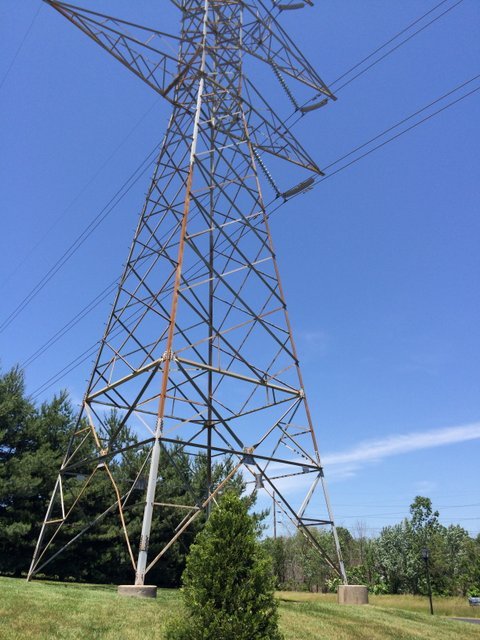 Pickwick Commons passes muster. It finds a balance between affordability and aesthetics—not optimal, but adequate. But how many others will slip through the cracks? Municipalities, eager to see a long-neglected tract developed, will greenlight a proposal with even weaker open space provisions than this one. And if they don’t amend their zoning ordinances, the developers will build unusable open space in full compliance with the law. With the mounting tide of baby boomers seeking to downsize, developers are scrambling to respond to the demand, seizing up large, awkwardly shaped, affordable tracts in metro areas across the nation. Age-restricted communities seem like a great solution at the moment, but who can predict their demand in 30 years? Will Generation Xers and Millennials want a Pickwick Commons when they’re ready to sell the big house in the big yard? Are Generation Xers or Millennials even living in big houses in big yards to begin with?

PrevTime heals non-organic wounds too.
Tipping the hat to heritage.Next

7 thoughts on “A little piece of heaven—with all the bells and whistles.”