While I suspect virtually every adult has at one time experienced some sort of nostalgia, we all have different stimuli. It’s that much more appealing when it’s unexpected, which was exactly the case when I was out recently along a major highway in Dover, Delaware’s rapidly growing capital, and I saw this sign. Unexpected and unexplainable. 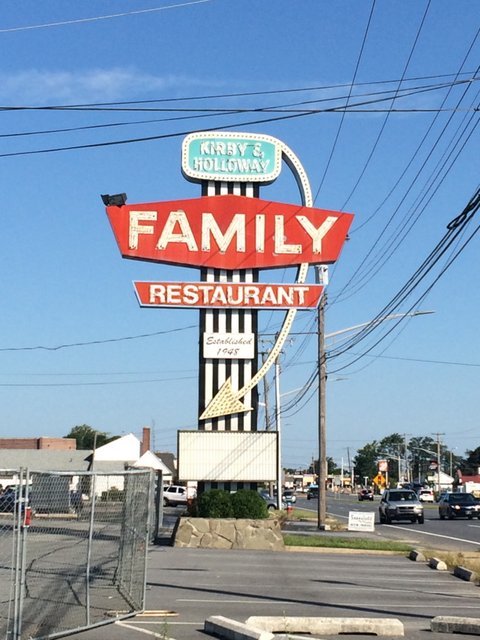 The first adjective that came to mind was a bland one: it’s just a great sign. But it deploys a few of the word’s denotations. First of all, it’s great because it’s huge; secondly, it’s great because it’s clearly still in excellent condition. But most importantly—and most connotatively—it’s old. In fact, because Kirby and Holloway was established nearly seventy years ago, it’s very old. And while it’s a bit of a stretch to speculate that the sign itself also dates from 1948, most of the telltale evidence would suggest that it predates the Nixon administration. (And, when we consider the general disposable nature of most signage, any fully intact sign from the 1970s is pretty ancient.)

So, how about the Kirby and Holloway restaurant itself? It doesn’t seem to be in quite as good of shape as the sign. 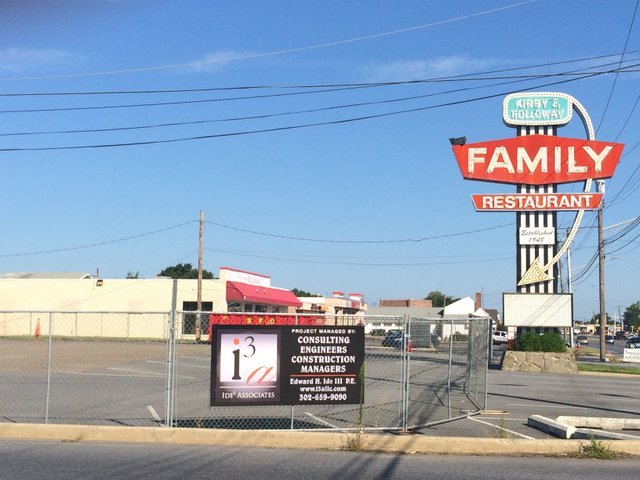 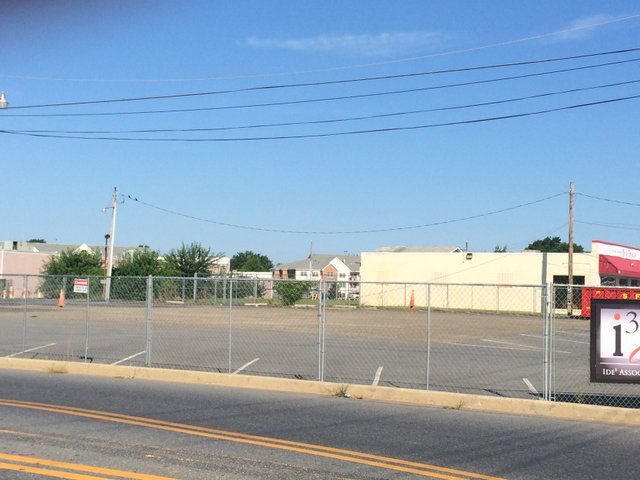 It’s gone. Nothing but a graded patch of dirt. My original goal in featuring this former restaurant was to show the endurability of pop-culture relics from days of yore, since I speculated that someone was redeveloping the site where Kirby and Holloway used to stand. That new developer was demolishing the old structure, since it didn’t fit his or her needs, but was saving the sign. Because it’s a great sign.

It turns out I was wrong: the restaurant succumbed to an overnight fire in Feburary of 2014. But obviously the flames didn’t lick the sign; it’s perfectly intact. And apparently demolition didn’t take place until just a few weeks ago. It remains to be seen whether the owners of Kirby and Holloway will rebuild, though they have in the past claimed that a rebirth was in the works. Either way, Owners Jim and Cathy Gray have vowed that the sign will endure; it “will stand sentinel” over the site, according to the Delaware State News article from July 16.

Regardless of whether the Grays decide to rededicate their restaurant at this same site in Dover, the sign stands. If they eventually decide to sell, it’s probable that the red, black and white icon would come down. But, for the time being, it’s the most prominent structure in the landscape on this stretch of U.S. Highway 13, known here (as in much of Delaware) as Dupont Highway. Along this flat, automobile-oriented stretch of road that circumscribes the oldest part of town, it’s a landmark.

Without even knowing the local culture Dover particularly well, I can still postulate that, if the owners eventually decide to remove the Kirby and Holloway, it’ll earn separate coverage in the local news media, with scores of respondents recalling their memories of the restaurant, or even the sign itself. And that has nothing to do with its size; plenty of other tall things in Dover could get demolished without the bat of an eyelash. It’s everything to do with the age. It earns its landmark status because, amidst all the other languages of the highway, it might as well be speaking Xhosa. Or, at the very least, King’s English when everything else around town gets that Mid-Atlantic, rounded-O drawl. Going back to the preferred connotation, the sign’s great—and it stands out—because it’s old.

The distinction here has less to do with the color choice, or the typeface, or the marquee-style lighting used, all of which are equally outdated. It has far more to do with the prevailing cultural attitude that would allow us to ascribe the word “outdated” in the first place. Of course it has fallen out of favor: such is the nature of advertising is its transitory appeal, while the nature of effective advertising is in its ability to align a long-recognized product or service with a brand that never feels stale. Very few national brands look the same that they do 50 years ago, or even 25 years ago. (In half a decade, it’s probable that a major brand has modified its logo at least three times.) Most imagery that embeds itself in the consciousness eventually elicits a negative reaction, as other images (or the people deploying them) seek to supplant it with an essence that is newer and fresher. The powerful image may show no sign of age in any of its physical manifestations, but the perceptual atmosphere in which it rests grows stale. And when an image loses its luster, the brand and company it supports can suffer as well. Thus, we see changes over the last decade in the logos for Wendy’s, Holiday Inn, TGI Friday’s, Pizza Hut. (I’m deliberately referencing businesses that sit along the same stretch of Highway 13 in Dover as the Kirby and Holloway.)

But it takes capital to make these changes, and national chains have far more of it than mom-and-pops, especially those that clearly invested so much in the original sign. It’s hard to imagine the owners of Kirby and Holloway being able to afford a new display every 15-20 years, so they must take advantage of the subtle semiotic weapon intrinsic to advertising: that most things that wither and die eventually get a second life after another period of time (a decade? twenty years?), this time steeped in patina and nostalgia. This vintage sign may not have served the owners of Kirby and Holloway particularly well in the 1980s, when it was particularly out of style, but they rode through the times, and now it “stands sentinel”, even when the restaurant itself has burned down. It has earned its retro chic, fashionably out of fashion, staying true to its promotional roots and its original look amidst all the ephemera of the surrounding national brands.

It’s a common strategy among locally owned establishments, because, often through the age of the sign and the outdatedness of the brand, the resultant patina earns the proprietor a degree of unconscious respect among consumers and passers-by.   I’ve observed it before in rapidly redeveloping Cambridge, or how it achieved the opposite effect in Detroit, manifesting a lack of any further economic activity through an ancient Quiznos logo above a long-shuttered storefront.  But when it elicits nostalgia, it’s nearly always to the proprietor’s benefit, because nostalgia galvanizes a preservationist mentality. People on a mission to preserve may very well empty their wallets in their support. (Then again, nostalgia is a benefit unless the proprietor wants to demolish and rebrand; then the preservationists morph into obstructionists overnight.)

Less than 100 miles away from Dover, a sign of similar magnitude in a much more urban setting evoked a similar nostalgia, though the distinctive semiotic properties of this one helped to steep the nostalgia in snarky irony. Along the commercial corridor of East Passyunk Avenue in South Philadelphia, local media lavished the adjective “iconic” on this sign. 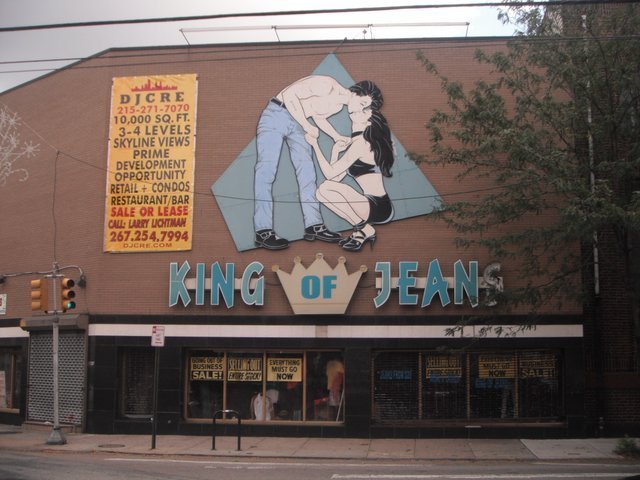 At the time I took this photo in September 2012, the King of Jeans business was liquidating its inventory. Only in April of this year did the old store face the wrecking ball, to make way for a mixed-use apartment building. But, in true form, the removal of the sign a couple months prior received separate coverage.

And what’s not to love? By most respects, it’s just as “great” as the Kirby and Holloway sign, but is it great in the same regard? Obviously not: nobody would use the words “tacky” or “kitsch” to describe the Dover restaurant sign, yet the blogosphere applies them liberally to King of Jeans. Clearly the semantic content is different. The Kirby and Holloway sign evokes another era tacitly through promotional iconography that is no longer popular. Meanwhile, King of Jeans explicitly renders a scene that now seems borderline ridiculous: a late-70s/early 80s homage to a culture captured by the Jim Croce song “Roller Derby Queen”, but without any of the sweetness evoked by Croce (who, incidentally, grew up in the neighborhood). This tawdry vignette seems even more out of place, since white collar professionals have largely appropriated the roller derby/townie culture, and these same hip, moneyed bohemians are responsible for the niche sport’s contemporary revival.

The King of Jeans didn’t find a buyer, but its claque of idolaters wouldn’t let it die in a scrapheap after the store closed and the building came down. Though much younger than the Kirby and Holloway sign, the King of Jeans still prevailed well beyond the point that it evoked anything to the store’s target consumer demographic. It became so outdated that it was ironically cornball cool, and it witnessed the gentrification of its surrounding neighborhood so that it become the outlier amidst newer, fresher, more bourgeois promotional language. Most of the new start-ups on East Passyunk are fashionable micro-restaurants or specialty boutiques—not quite the same as cheap, off-brand clothing. The verdict isn’t out as to whether the yuppie embrace of roller derby is sincere enough to elevate it to a professional sport on ESPN-1. But a readily disposable commodity like a storefront sign needs only a little nostalgia and a bit more money to ensure that it will outlive the business it promoted—and maybe even the civilization that helped to spawn the business.

PrevA traveler’s guide to the penitentiary.
Provisions for our peccadilloes.Next