Tossing historic accuracy out the window.

Don’t let the naysayers sway you. Historic preservation aspirations can harmonize with the private sector. In fact, it’s happening now more than ever, and it’s depending far less on pubic sector intervention than ever before. With increasing frequency, entrepreneurs are mobilizing to salvage buildings or prominent features deemed under threat, either from redevelopment or decay beyond the point of no return. More than that, the business community has recognized an escalating curiosity toward rediscovered older structures, and it has responded by repurposing them accordingly.

The persistent use of the prefix “re-“ in that preceding sentence demonstrates—reveals—the cultural forces at play here: we witness a certain novelty in something emerging again, the most literal definition of this prefix. However, using the words “novelty” and “again” in the same sentence deploys an oxymoron, manifest through the Latinate morpheme “nov-” standing in for “new”. Thus, “new again”. In calendar years, nothing involved in historic preservation is new (at least by North American standards), but the subversion of chronological conventions piques our interest, because the act of restoring something endows it with the meretricious sheen of newness for the second (and maybe third) time. And so, by monetizing this growing fascination in old things, we can observe whole districts rise like a phoenix, often one building at a time, once seemingly dead (or a least obsolete). Now they enjoy a second life.

The previous paragraph’s laborious fixation on semantics borders on the pretentious, so I’ll quit while I’m ahead. At any rate, the landscapes speak for themselves, and so does the information superhighway that allows people to access those landscapes with almost unlimited freedom–like this simple Facebook page, which no doubt helped spread awareness of a threatened old church in my hometown of Indianapolis.  People are showing a far greater tendency to rally behind initiatives that promote salvaging old structures. Social media has no doubt abetted the process, since it helps promulgate awareness of a threatened building. Obviously not everything survives. But they often do.  And, increasingly, the buildings don’t have to offer any real architectural distinction or historic significance. They’re just old and structurally sound enough to save. That gives them a cachet. And people organize.

Jersey City no doubt offers plenty of examples. But one in particular comes to mind, nestled in the heart of the Powerhouse Arts District, the city’s warehouse district. 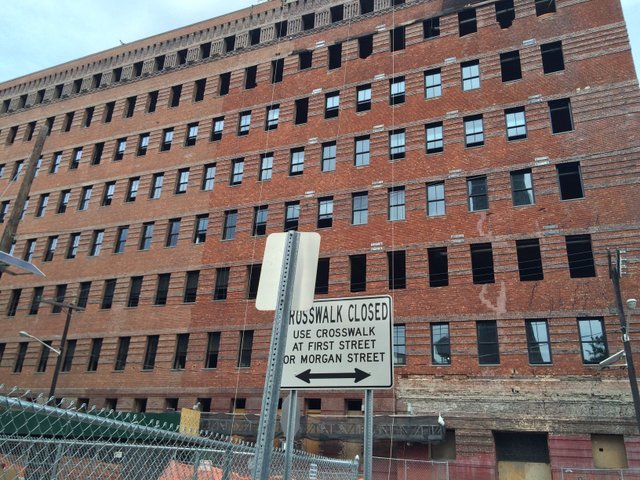 The long-vacant (and even longer under-utilized) Butler Brothers Building now shows visible signs of the transformation that will eventually turn it into what developer Mill Creek Residential has tentatively called the Modera Lofts: 366 apartments with fully exposed brick interiors. It’s a much happier fate than this building faced as recently as 2008, when the previous owner sought immediate approval to demolish it, claiming (along with his engineer) that the it was in danger of imminent collapse. Seven years later, this flimsy little edifice has somehow managed to hold itself together enough to get transformed into luxury multifamily housing.

How’d it do it? Needless to say, the City of Jersey City very aptly deduced that the original developer grossly overstated the building’s structural problems. Beyond that, what transpired between 2008 and 2014 is a little murky (at least as far as news articles are concerned), but a May 2014 article brazenly featured the keywords “saved for posterity”–only the article does not reference preservationists or a government entity as the responsible party.  The article had no references to subsidies or tax credits.  A developer was going to save the century-old building.

Over a year later, a visit to the Powerhouse Arts District clearly reveals activity at the Butler Brothers Building, but it’s not quite the scaffolding one might expect. 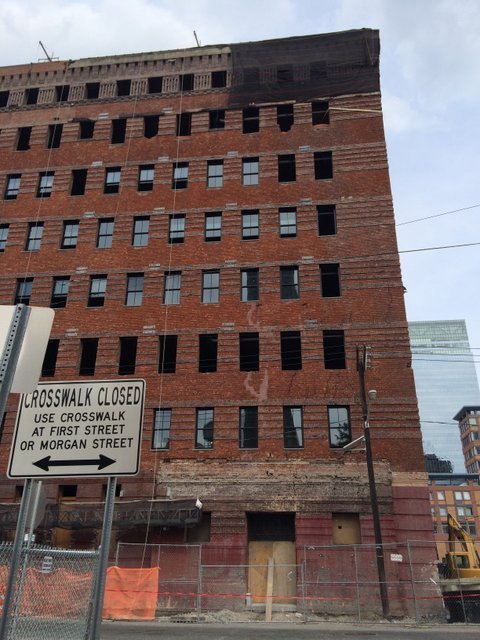 Something else is going on. The construction crew has removed the glass from most of the windows. While upgrading windows is standard procedure in most adaptive reuse initiatives, those with an eye toward historic accuracy usually consider window improvements that maintain the integrity of the original design. Preservationists have intervened on countless occasions to prevent redevelopments from carelessly and needlessly replacing historic windows, when a sensitive restoration would suffice. But that doesn’t seem to be happening here. 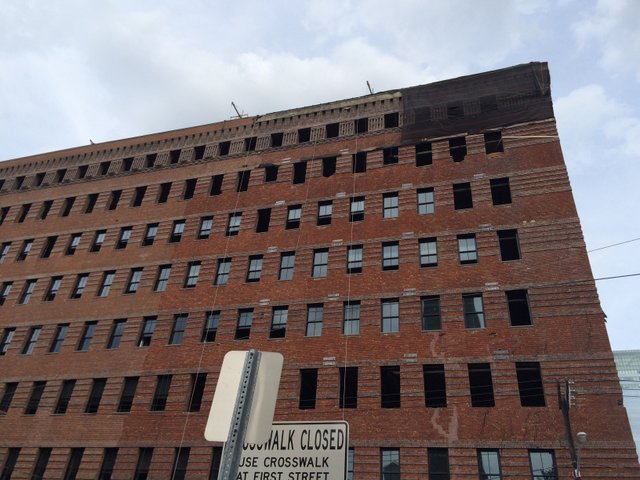 Notice the fenestration pattern is different on the higher floors than the lower ones. The original Butler Brothers Building featured windows of a uniform size, but not anymore. A zoom-in to the upper levels highlights the difference. 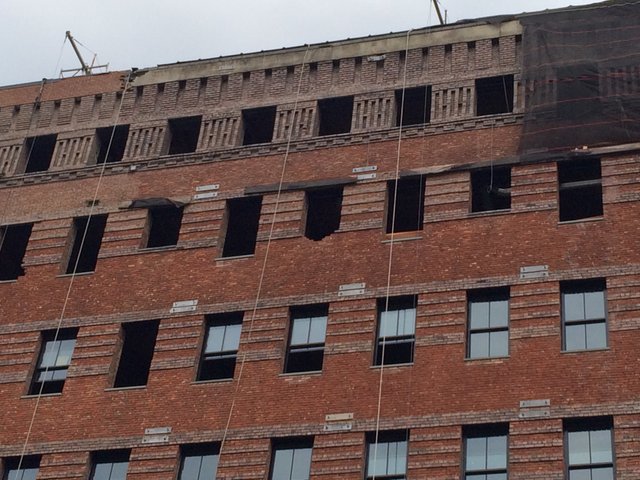 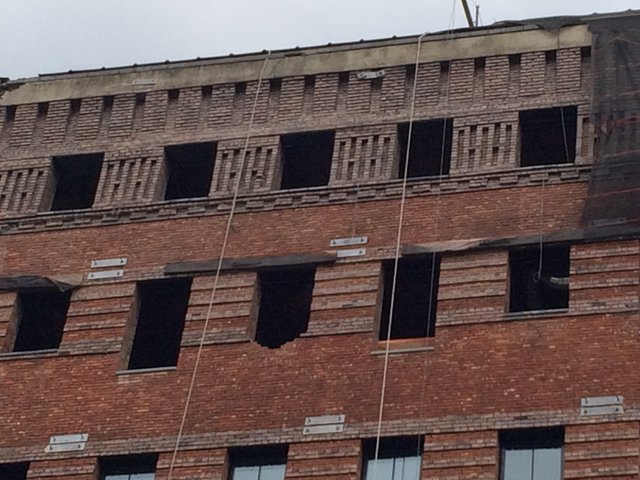 It’s part of an ongoing process, and Mill Creek Residential is gradually modifying every single window in the entire building. Why? The original size of the windows, though perfectly suitable for an enormous warehouse, was insufficient for human habitation. The developer decided that it could not effectively market this structure to a luxury clientele if the windows were too small. It’s possible the project wouldn’t have passed muster for a more moderate-income clientele either, but Mill Creek clearly saw the potential to transform Butler Brothers Building into something for the high-rollers. After all, Lower Manhattan is just a quick train ride across the Hudson River, where many jobs command six and seven figures. Since this redevelopment did not seek public dollars (or at least none that local media coverage has revealed), it’s probable that the only way Mill Creek could achieve a return on its investment in the already pricey neighborhood was to make it luxury. And luxury people aren’t going to settle for keyhole windows.

So the developer punched out those window openings, much to the chagrin of Jersey City’s most vocal preservation advocates. Thus, the transformation of the Butler Brothers Building into Modera Lofts reflects a series of compromises between two communities—adaptive re-use developers and historic preservationists—who share a stake in urban revitalization. However, placing the simple chronology of the Butler Brothers Building/Modera Lofts in its full context, it would seem that all the compromising came from preservationists. After all, what exactly did the developer have to sacrifice? The fact remains that, when push comes to shove, the developer has all the monetary skin in the game, and if Mill Creek and its equity partners misjudge the general population’s interest in these luxury lofts when all’s said and done, it will cost them millions—possibly pushing them to bankruptcy. And the developer had to spend that much more than some adaptive re-use projects, just to make those windows viable.

“New again” might mean people love 19th century buildings, but they don’t cherish privies. And they sure like closets. (My suspicion is that even the most ardent preservationists appreciate those modern amenities as well.) As historic preservation achieves mainstream acceptance, it must also face mainstream dilution. It’s possible that a well-organized cadre of preservationists could have stymied the dismantling of several hundred historic window apertures, but they in turn could have pushed the developer to the point of abandoning the project altogether. And then what? How much longer before another owner claims imminent collapse, and how long before the leadership in Jersey City has to capitulate? It may seem like a pat response to assert that this is a win-win, but buildings in ordered groups help create the notion of districts, and districts translate to neighborhoods at their most effective. And virtually all denizens of urban or metropolitan America seek some identification with a neighborhood, whatever it may entail. To heal the body, we have to start with the cells. Or maybe we just manage the cytoplasm within them.

PrevA colorful patch on a faded pair of slacks.
A traveler’s guide to the penitentiary.Next