A traveler’s guide to the penitentiary.

Along any stretch of highway, it’s easy to imagine feeling at least a little unsettled if you drive past this sign: 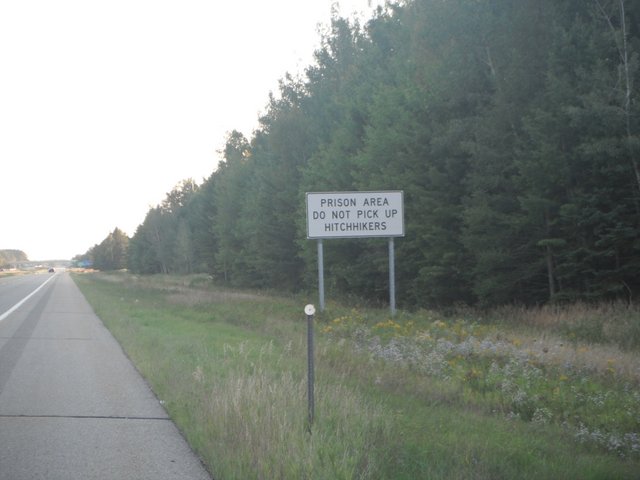 This is exactly what one encounters heading northward along I-75 in Michigan’s Upper Peninsula, about 20 miles south of Sioux Sainte Marie and the Canadian border. In most respects, it’s a notice we all can appreciate: a logical safety precaution. But it’s also about the most overt declaration of the culture of fear fostered by the presence of a major correctional facility that we’re ever likely to see.

I haven’t blogged a great deal about jails or prisons, in part because they are rarely that accessible to outsiders. And even when I can frame one within my camera’s viewfinder, it’s not particularly wise to loiter, particularly when taking photos of a place used to confine offenders. But then, despite the fact that we often spot them in the distance while driving along an interstate, prisons are basically coy about their location: they don’t want to draw attention to themselves, for reasons clearly articulated in the Michigan sign above. But the residents who live near a prison are just as keen for them to remain low profile; few chambers of commerce would ever see them as a feature worth promoting.

Prisons, jails and most other institutions that do not give their residents freedom of egress share a certain love/hate relationship with their surrounding communities. They’re a necessary part of ensuring that the law-abiding majority of society can continue to function unencumbered by threats to its safety. Most towns the size of Mayberry have a jail, or at least a few cells. But prisons—distinct from jails since they are an offender’s long-term destination after sentencing—are comparatively few and far between. While urban settings for prisons aren’t unheard of, they are increasingly uncommon: a directory of currently operating prisons in Michigan reveals only a few that sit within the urbanized area of a major city. Detroit has one and also a reentry center; Muskegon has one (in the outskirts); Jackson has one, well outside the city limits. Most other prisons in the state are proximal to towns under 10,000 people. And in the generally rural locations where the largest prisons operate, they serve as a sort of paradoxical economic engine: a major source of employment on their own terms, but one that is unlikely to attract much of any other job growth that isn’t directly dependent on the incarceration industry.

The prison here in Michigan’s Upper Peninsula is not just a single structure: it’s a series of buildings integrated with a sizable and sprawling unincorporated community known as Kincheloe. At this date, it consists of a branch office of the Michigan Department of Corrections, and two correctional facilities (Kinross and Chippewa) with the capacity for over 1500 male inmates. As recently as a decade ago, it included three other facilities: the now-closed Hiawatha Correctional Facility, the Straits facility (consolidated with Chippewa in 2009) and Koehler, a minimum security prison camp built on a model that the State of Michigan discontinued in 2009. How did a modest little unincorporated community like Kincheloe get saddled with all this? For that matter, what if they actually sought it, and if they did, why?

Apparently the prisons represent a concerted effort to retain the community’s labor force, which would have all but disappeared along with the decommissioning of the Kincheloe Air Force Base, in operation since 1943 and closed a few years after the Vietnam War in 1977. The base hosted 10,000 personnel, and a loose application of the multiplier effect indicates that the active duty military spawned its own host of jobs and ancillary services. Thus, when the base closed, Chippewa County stood to lose 10,000 jobs and the equivalent to quite a bit more than 10,000 people. Decennial census reports suggest that the region did suffer from the closure: the 1970s saw a population decline of 10.4%, after growing or remaining stable through most of the rest of the century.

But, by most metrics, the area recovered. The former military installation now hosts the Chippewa County International Airport, Kinross Fabrication and Machine, Inc., a variety of restaurants, minor retail outlets, banks, churches, and most other features one might expect in a town. Chippewa County as a whole has regained the population it lost in the 1970s and now has over 9,000 more inhabitants than it did after the inactivation. In short, coordinated planning at the state and county level fostered an adaptive re-use of the old airfield and the long-term retention or recovery of those military jobs. But a sizable contributor to this growth is the presence of the two correctional facilities and all the inmates within them. Kinross Charter Township, which encompasses most of the habitable portions of the former Kincheloe Air Force Base, has an skewed sex ratio: nearly 2.5 males for every female, which is not surprising, given that the two facilities harbor only male prisoners.

And the economic gain comes with some bittersweet reminders, like this billboard: 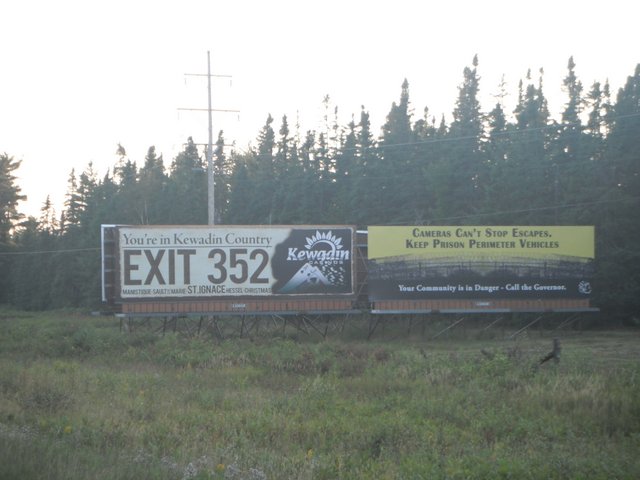 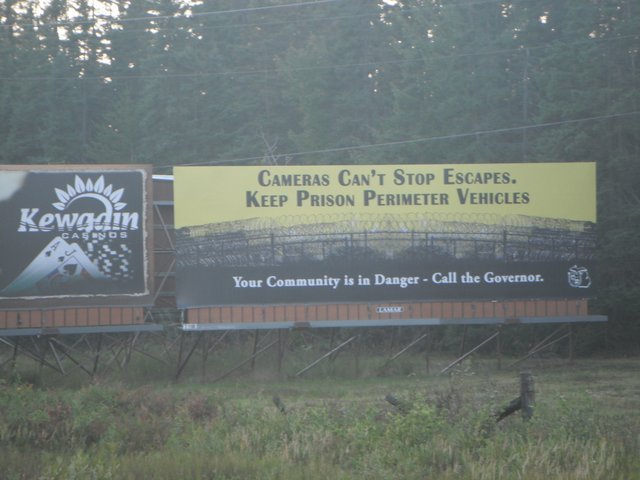 Notwithstanding safety concerns, the job gains fostered by a major prison complex serve as a double-edged sword. Undeniably the prison industry furnishes a community with some relatively stable, high-paying jobs. But these facilities owe much of their employment base to forcibly disconnecting their “clientele” from the rest of society. As a result, prison communities have some of the lowest labor force participation rates in the country. While some labor camps foster modest economic activity through the prisoners at relatively low cost, I would venture to say it doesn’t result in a positive ROI, compared to the expenses in maintaining security that protects the outside world from potential violent offenders. Operational costs of prisons are exorbitant and under constant scrutiny from legislators; the billboard above suggests that the State is considering replacing patrol vehicles with cameras to cut $13 million from the budget. And at least some of the residents of Kincheloe are displeased about the potential safety repercussions of such a decision.

Regardless of the economic benefits afforded to rural Kinross Township through the retention of these prisons, only a fine line exists keeps it from morphing into a legal definition of a nuisance. And it takes a lot of money to buttress that fine line. The redevelopment of this region into a cluster of correctional facilities may have retained population and kept some nice old military infrastructure in continual use, but at what cost? Incarceration is a seemingly inevitable feature in any civilization—as much transportation, which includes hitchhiking as a subset. But the intersection of incarceration and hitchhiking-as-transport doesn’t bode well for feelings of security of locals in Kinross Township—or anyone else who passes through. The sign is a fair warning, but a welcome mat it ain’t.

3 thoughts on “A traveler’s guide to the penitentiary.”