A colorful patch on a faded pair of slacks.

At a primary intersection in the weather-beaten downtown of Pawtucket, Rhode Island, I came across this little row of storefronts. 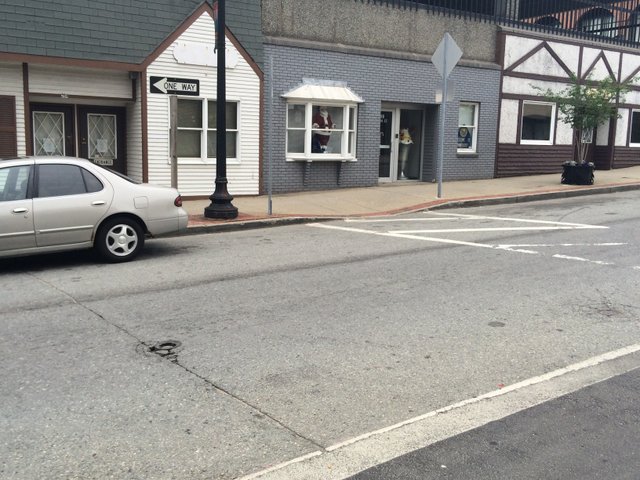 Truth be told, the photo is deceptive. I positioned the camera so that the street rests in the center, only to conceal what is going on at the periphery.   Perhaps the reader/viewer can already tell, but if not, the next photo is a dead giveaway. 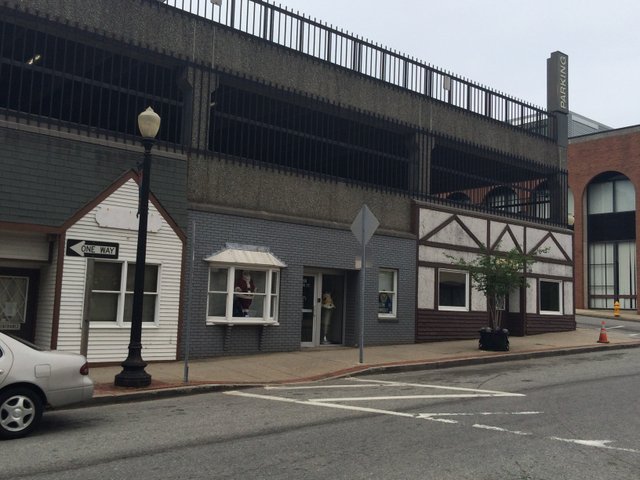 This isn’t a row of independently conceived little buildings; it’s the street-level side of a parking garage. And, within its context, it’s remarkable.

First of all, it achieves the most basic objective of activating the street level. This hardly seems like rocket science to anyone familiar with contemporary urban design principles, but the abundance of lifeless parking garages scattered across most American downtowns would suggest it’s not such a minor achievement.   By the 1960s, when it was clear that town centers were declining in both market share of the jobs and in their overall importance, many city planners determined that the key means of addressing this malaise was through improved parking to remaining viable buildings. After all, most American households by that point in time owned cars, and they were living increasingly far from the city centers. So the ostensibly obsolete older buildings downtown made way for parking lots or garages, giving motorists a quick parking job and convenient walk to their destinations. And the individuals that conceived these garages didn’t build anything else at the street level, because why add more commercial space to a district that was struggling to hang on to what it still had? While the earliest garages often boasted handsome façades that allowed them to blend in with the remaining 19th century and early 20th century office buildings, soon they just devolved to hulking, concrete horizontal stripes. But they sure endowed our downtowns with a lot of parking.

The tactic didn’t work, and downtowns continued to hemorrhage jobs. Perhaps these revitalization efforts would have succeeded if these parking garages had served more than a single purpose, like the one here in Pawtucket? Probably not—after all, the prevailing belief up through the early 1980s was that downtowns were hungry for parking, not for more commercial space. And this, in turn, explains the second reason why the Pawtucket garage in the above photos is so distinctive: it’s old.

Not surprisingly, the internet offers few details on this garage.   The City of Pawtucket references the second floor of the garage as available for long-term parking to visitors of the town, while the third floor is permit only. One local media source excoriating the interior cleanliness of the garage notes that it is a “1970s-era construction”, indicating that it took place during the peak of an time period (more like the valley) when downtowns were struggling. This garage inevitably replaced older structures along Pawtucket’s main street, providing the city center with an abundance of spaces at a time when that seemed to be the only way to stave off the flight of further businesses. Thus, the developer—which quite possibly was the City of Pawtucket itself (since it has long owned the garage)—installed these little storefronts in an era when most cities were just seeking new ways to accommodate cars, which is a remarkable feat in itself. Most other 1970s-era parking garages would have plopped nothing more blank exterior wall onto the streetscape. This developer even showed some sensitivity toward aligning the streetwall with adjacent buildings, since the garage does not overwhelm its neighbor. 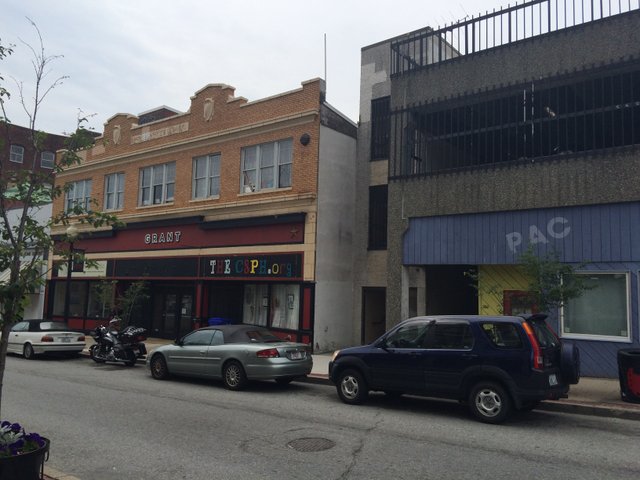 But the bittersweet achievement of this otherwise run-of-the-mill garage are those storefronts, which, judging from their placement within the garage (most visible on a corner view of the property, such as this Google Streetview at Main Street and Park place East) don’t stretch back so far. And there are four of them. An article from the Pawtucket Times estimates that they total about 2,000 square feet, indicating that each façade only captures about 500 square feet. They’re small. In other words, way back in the 1970s, the individuals who conceived this parking garage were experimenting with something that borders on microretail—the ultra-small spaces intended to accommodate fledgling entrepreneurs who lack the resources to lease larger storefronts.

The leasable spaces in this Pawtucket garage may not quite pass muster as true microretail; the most salient American manifestation of microretail would be the food truck (or something of equivalent size). But these tiny shops from the seventies represent an almost prescient attempt to mix land uses within a structure. Most urban parking garages up until about 1990 were single-use, with street-level frontage that offered nothing with which pedestrians could engage. While mixed use garages are much more common today, it may only be through fiat: most bigger cities have regional center design standards that push vigorously or mandate first-floor retail. But microretail—where the tiny leasable areas requires a rethinking of financing and design to accommodate a greater density of plumbing, wiring, and HVAC—still faces a great deal of skepticism among American commercial real estate developers to this day.

And, alas, the Pawtucket examples below aren’t exactly leading the charge. 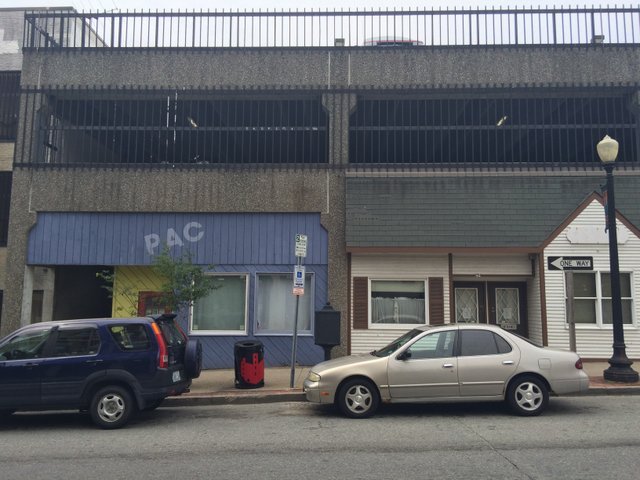 As tidy as they appear, they don’t look terribly active. Closed curtains and window dressing at least mitigate some of the hollowness, but they clearly aren’t prized commercial space. According to the already cited July 2013 Pawtucket Times article, which announced the City’s attempt to sell the garage to the private sector to either operate or redevelop it, all four spaces were vacant. Two summers later, when I took these photos, the situation for these storefronts doesn’t look any more promising. But that may have less to do with the challenges of microretail than downtown Pawtucket’s ongoing malaise. Though fundamentally a suburb of Providence with which it shares a border just a mile and a half to the south, this little city of over 70,000 grew as a manufacturing powerhouse in its own right, with a discrete downtown oriented toward industry along the Seekonk River. In the 1960s, when Providence was plunging in population from industry loss, Pawtucket remained relatively stable, losing .5% in population loss compared to Providence’s staggering 16.6% decline. It’s possible that, while the center of metro Providence was struggling, Pawtucket was still holding its own as a bedroom community with a level employment base. And, in the 1970s, the City of Pawtucket could still justify a mixed-use parking garage in what was then a functioning downtown.

Forty years later, the tables have turned: downtown Providence has largely recovered and is quite active, while Pawtucket’s main street offers little more than day jobs, coupled with thrift stores, tax preparers, addiction recovery centers and a host of other social services. On a Saturday morning, the streets are virtually empty. 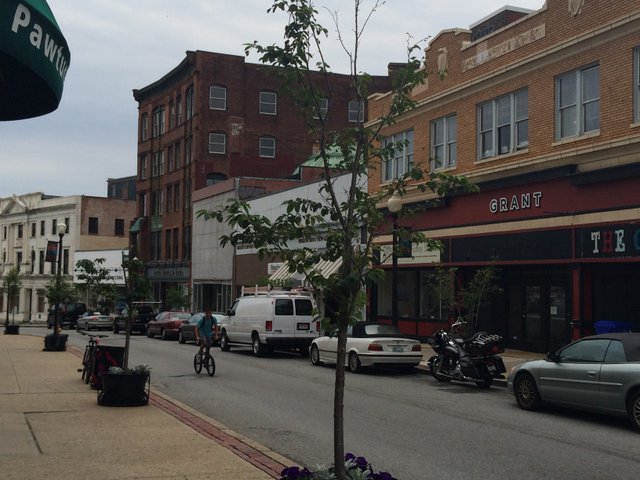 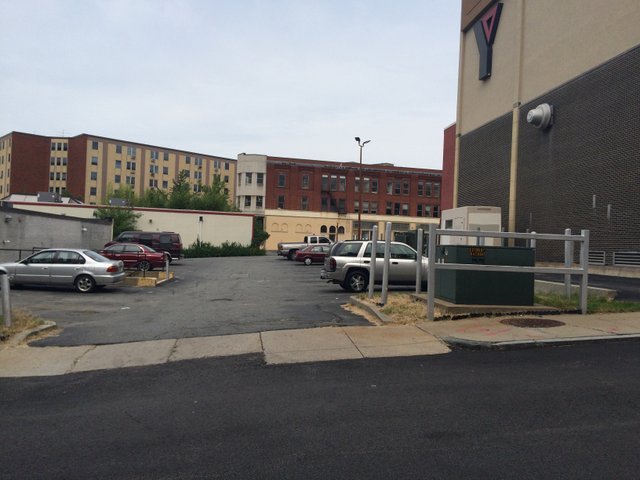 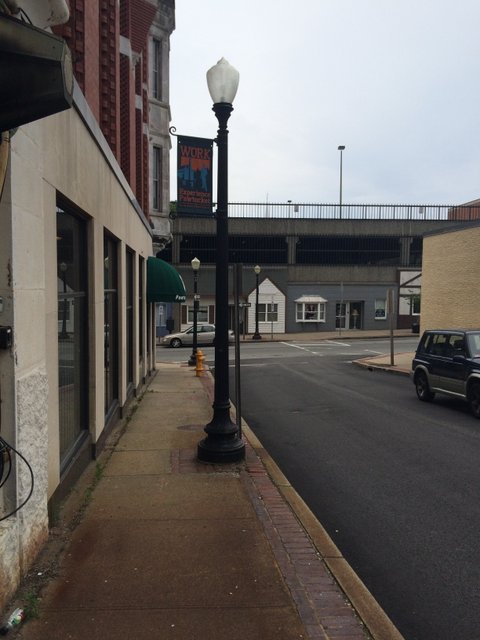 So, these storefronts have a challenging downtown economic climate with which to contend. And, based on the City’s RFP two summers ago, the entire facility may soon come tumbling down. Then again, a much more recent report from local media source WPRI suggests that the City was unable to find an appropriate buyer, and now the Mayor’s biggest goal—the linchpin to downtown Pawtucket’s revitalization—is to upgrade the garage, which apparently involves “blowing out” those storefronts in order to “improve safety and increase foot traffic”.

Yes, that’s right. These same storefronts that favorably distinguish this garage from virtually every other parking facility built in the 1970s…these little nooks that offer the possibility of street engagement at a time when comparable structures in other downtowns never conceived of such a thing…they could get destroyed before the end of the 2015 construction season to make way for more parking. They might be dowdy and empty, but making them the scapegoat for downtown Pawtucket’s stagnancy is a low blow. Negligent maintenance aside, this is downtown parking done right. A façade improvement that retains street activation is nearly always a superior alternative to a structural change that eliminates activation altogether. Even if it takes years for these little spots to find tenants, the overall impact of eliminating street-level commercial space along one of downtown’s most prominent intersections is far more damaging in the long term. Would a handful of parking spaces really be worth more to the operator than even 50% commercial occupancy? Perhaps the Mayor’s proposal to “blow out” the storefronts will simply involve replacing the façades with something more attractive and modern but still functional as retail. But it’s hard to be optimistic based on the WPRI featurette. History truly does repeat itself, and, if this Pawtucket garage is any indication, sometimes the cycle begins again in less than a lifetime.

PrevA star is born…and stepped on.
Tossing historic accuracy out the window.Next

11 thoughts on “A colorful patch on a faded pair of slacks.”