Some cultures go full bloom; others are happy to remain bulbs.

Considering that our landscapes are replete with signifiers, why is it that we typically only notice the big, garish ones? It doesn’t take a brain surgeon—or a semiotician—to answer that question: big symbols tend to dwarf little ones, so they nearly always get an upper hand in their ability to convey a message.

If this sounds so basic as to be almost a little stupid, leave it to me to complicate things. A perfect example of bigger-is-better comes in flags, or, better yet, in vexillology, the study of flags. I’ve reported on the topic multiple times in the past, particularly in light of the widely variable quality of US state flags. The state of Maryland possesses what most vexillologists would agree is a strong flag, and, as I blogged about a few years ago, Marylanders seem proud of it.   Here it is unfurled.

Why is it so good? Well, it doesn’t look like any of the others. Especially when you consider some of those “others” include neighboring states Pennsylvania or Delaware. 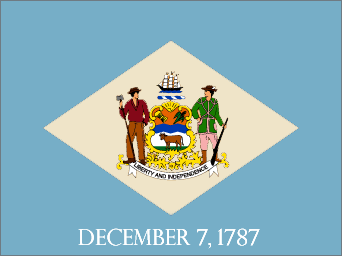 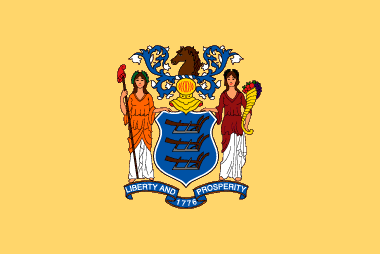 After scrutinizing these other flags, they’re all pretty different from one another as well, in terms of the figures, the mix of colors, the text. But, despite the distinct content in each flag, the layperson would typically claim the flags all look the same…except for Maryland. It isn’t so much that the others are replicas of objects and Maryland’s just an abstract cluster of competing flourishes. The fact is, the symbolic gestures on Maryland’s flag are bigger, cleaner and much easier to interpret quickly. The neighboring states, meanwhile, more or less adapt the state seal, combining multiple allegories into an expression that is ornate and overcrowded. In short, vexillologists more or less agree that Maryland has a good flag, while the other states have bad flags. A six-year-old child could reasonably reproduce the Maryland flag after looking at it for fifteen seconds—at least well enough that others would be able to identify it as the Maryland flag and not another. The other flags? Not a chance. Even if the Delaware flag were five times the size of a Maryland flag, the Maryland flag would always brand itself in the memory. Most vexillologists argue that the convoluted array of objects on a state seal makes for a poor, dull, impotent flag. And most US state flags are forgettable.

So bigger really is better. But it’s not so much the physical magnitude as the clarity of the symbolic gesture that speaks so powerfully. Bigger is clearer. And strategic deployment of these gestures allows some culturally influenced self-expression to assert itself more effectively than others. Like the “Alpine Village” of Gaylord, Michigan, for example, which I blogged about a few months ago. 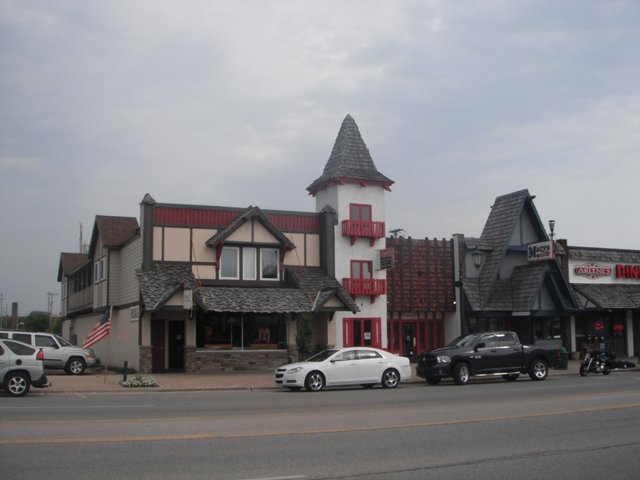 Unlike most towns of 3,500 people in Michigan (or anywhere else in the US, for that matter), Gaylord’s main street architecture has a vernacular so distinct that even the most untrained of eyes can spot it. 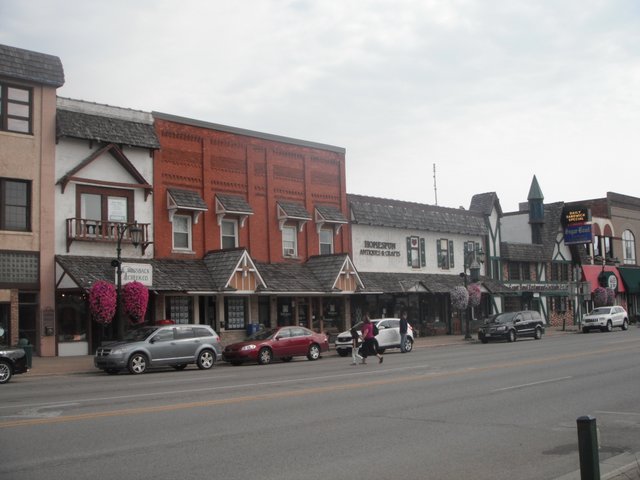 Virtually every building claims either a pronounced gable or half-timbering, intended to evoke a mountain village of Switzerland. They’re everywhere. 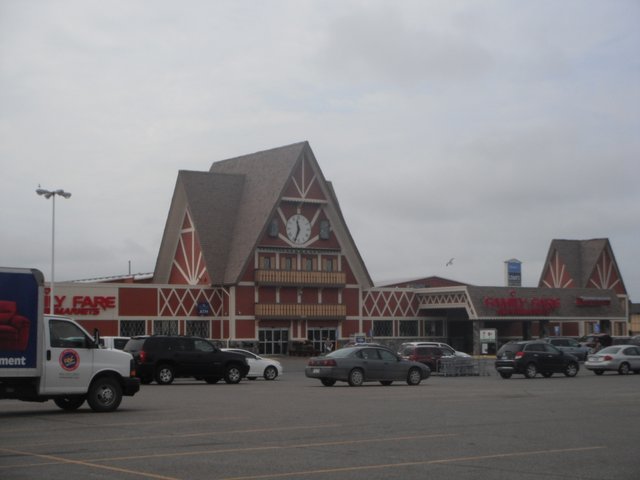 Even the McDonald’s has it. And they’re prominent enough that the town has earned a bit of a reputation and an above-average tourist cachet for it, with a moderately active retail and restaurant scene along its four-block commercial street. Gaylord has successfully appropriated an aesthetic that distinguishes it from the other Michigan towns in the area—particularly landlocked ones like Gaylord—endowing it with an atypical appearance and economic health. The references are big, bold and clear; you can’t miss them.

Far to the south of Gaylord, the much larger town of Holland, Michigan (more of a smaller city) can boast a central business district of superior size and vibrancy. 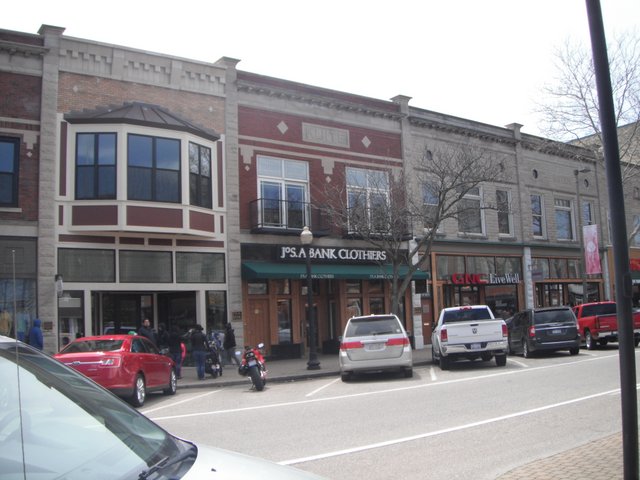 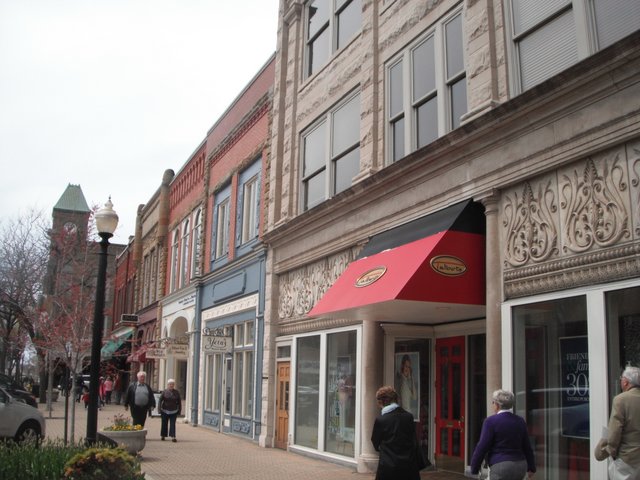 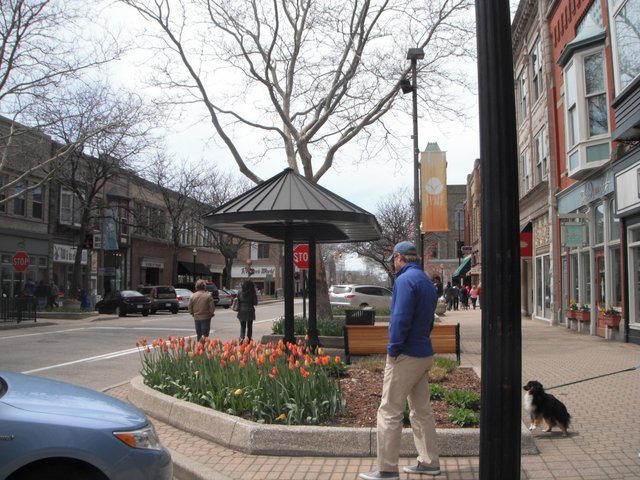 And at over 33,000 people, Holland has real downtown, at a larger scale than a mere main street. While the primary corridor is 8th Street, the activity clearly stretches in all four directions when one stands right in the middle of a prominent intersection. The time I took these photos aren’t entirely a fair representation of Holland’s health. Since I arrived during the peak of Tulip Time, the city’s largest annual festival (attracting tens of thousands of visitors), my photos depict the downtown during a particularly active weekend. But even without the throngs of visitors, it’s easy to conclude that Holland’s downtown is in very good shape. 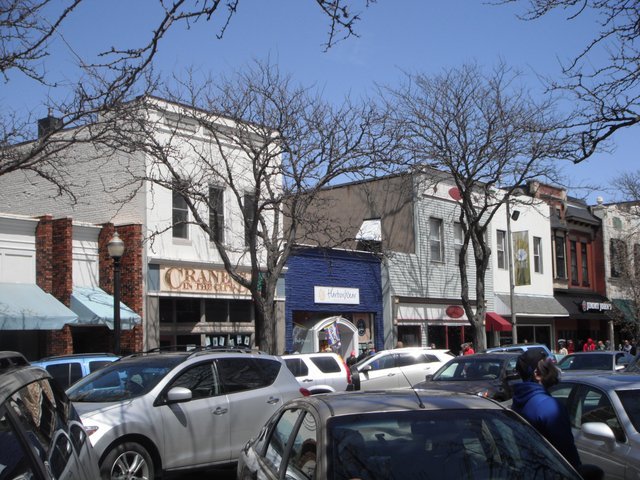 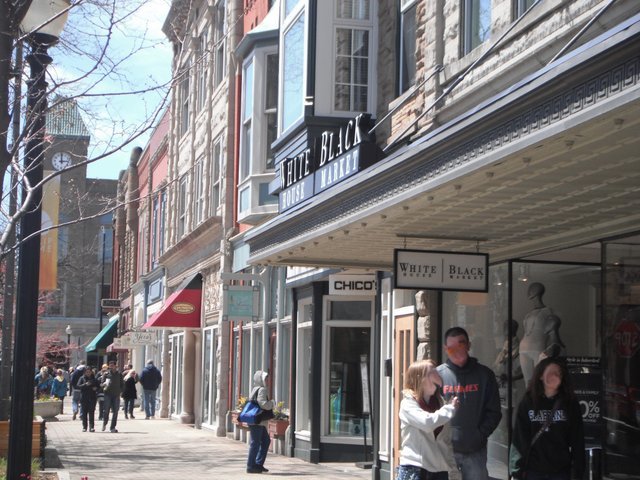 The aforementioned photos featured some familiar brands: Joseph A. Bank, Talbot’s, Chico’s, White House Black Market. Although one might stifle a yawn hearing the names of all these national chains, it’s a testament to Holland’s success at attracting people with thick wallets that they can claim such tenants in the old commercial main street of a small city. Plenty of malls in America would kill for a Talbot’s. And, as a counterpart to the brand names, Holland boasts plenty of locally owned establishments as well. 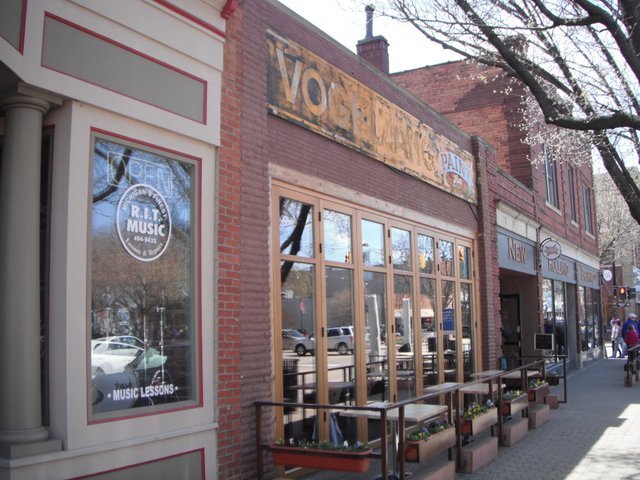 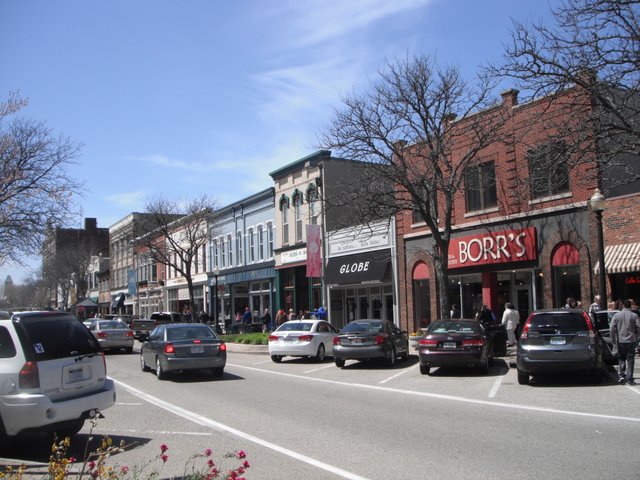 Viewed in terms of the retail health of its downtown, Holland seems to be thriving. Then again, retail is simply the most conspicuous method of assessing a place’s character; whether consciously or not, virtually all people will judge a commercial district’s overall quality on the occupancy and targeted income level of the storefronts. (I’m guilty of it right now.) However, outside of the tenants along 8th Street, the overall appearance of downtown Holland is not particularly distinct—certainly in comparison to all of those elaborate gables in Gaylord. Architecturally, Holland does not make big waves. But a closer look reveals some idiosyncrasies: 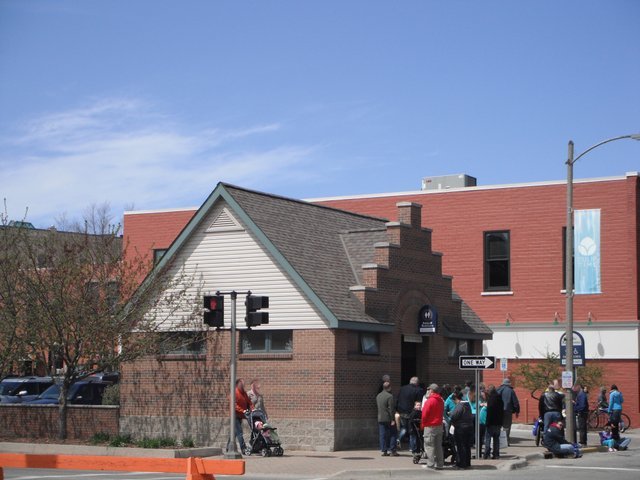 Above the cluster of people, notice the stair-step shape to the gable that frames the doorway—a roofline that descends through a series of right angles, rather than the conventional slope. And here it is again: 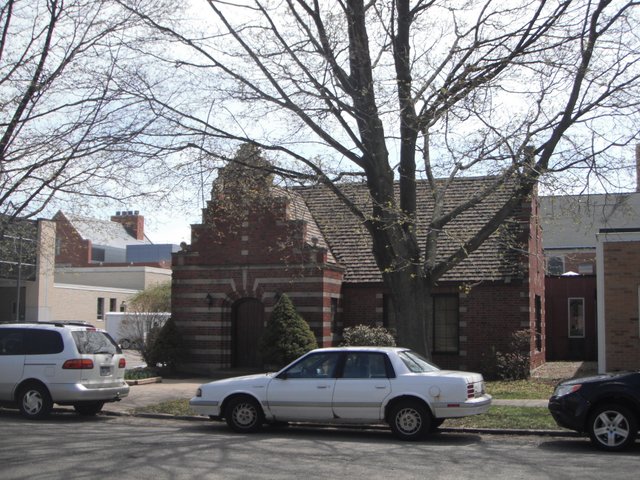 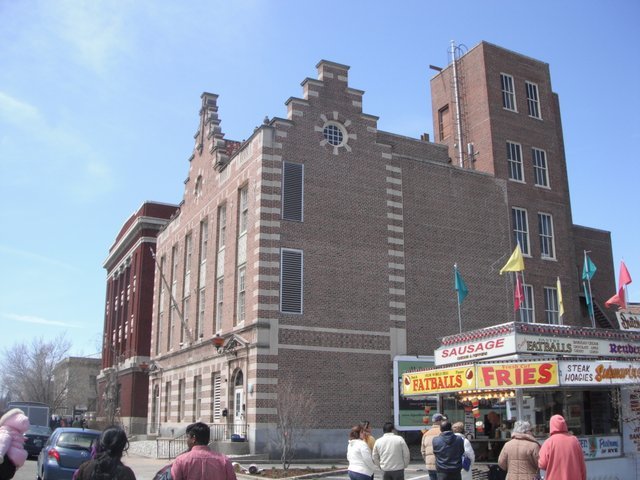 Travelers to the Netherlands or Belgium will recognize them as trapgevel, a common feature among structures from a certain time period in these two countries. I’ve written about it in the past, after having seen a strange building with this same roofline in the small town of DeMotte, Indiana, southeast of Chicago. I later learned, after noticing the distinctive last names among all the storefronts in DeMotte, that it is a historically Dutch settlement. And in Jasper County (where DeMotte is located), Dutch is one of the most common ancestries. 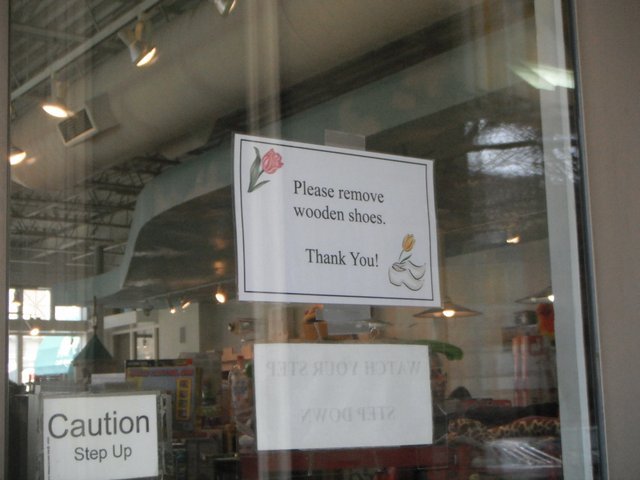 Needless to say, Holland isn’t just a coincidental name for this city in Michigan. It’s a reference to its founders, a group of Calvinist separatists seeking greater religious freedom than they found back home. Today, Holland is still the epicenter of the Reformed Church in America, the American counterpart to the Dutch Reformed Church. (DeMotte has its share of Reformed Churches as well.) Southwestern Michigan, in fact, may be the epicenter of the Dutch diaspora to the United States, with Grand Rapids as the putative capital.

I visited Holland during its largest festival, when the streets are teeming with stereotypically culturally Dutch bric-a-brac: women in mock-traditional garb (clogs are essential), miniature toy windmills, the beloved stroopwafel cookies, and, of course, tens of thousands of tulips. 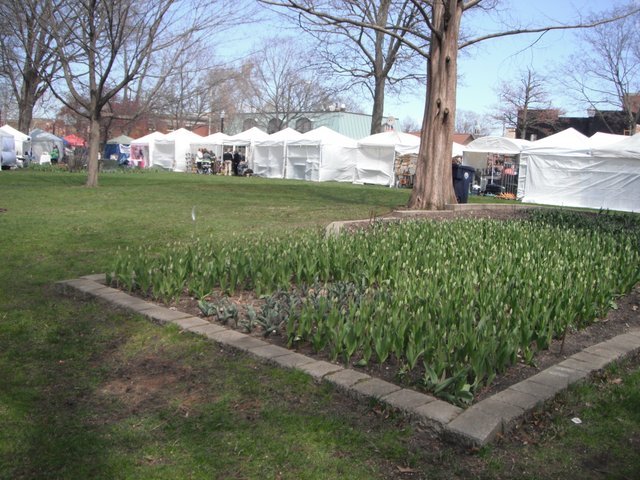 (Or, as evidenced by these photos, scores of tulip bulbs. Normally the second weekend in May is perfect for the Tulip Time festival, but the punishing winter of 2014 delayed the onset of spring. The high temperature the day of these photos was in the upper 40s Fahrenheit—about 9° centigrade). 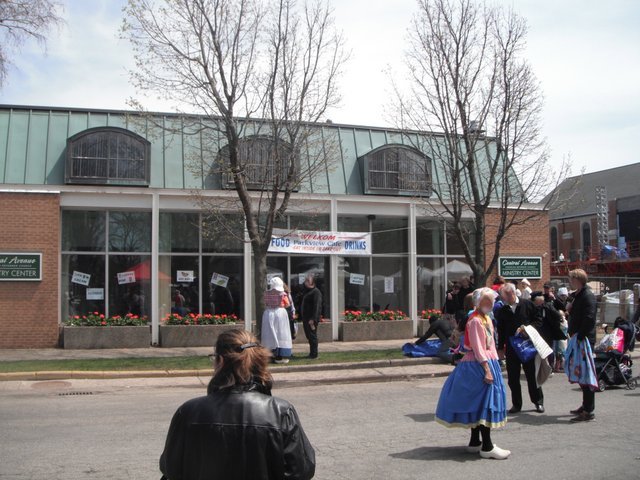 Strip away the festivities, though, and Holland, Michigan lacks the dramatic Alpine architectural ornamentation of Gaylord. Yet, as I noted in my previous article on Gaylord, nothing would suggest that the half-timbered northern Michigan town has any authentic Alpine or Swiss heritage. Not a scintilla. All those prominent gables are purely Gaylord’s shrewd branding strategy—a means of distinguishing itself, devised by civil leaders several decades ago. Conversely, Holland, Michigan, is about as Dutch of a place as you can find in the USA, but the overt references to its heritage are few.

Putting these two Michigan municipalities into perspective, one might assert that Gaylord is overcompensating for something. But I don’t want to personify a town or its architecture by applying psychoanalysis—too late—so it’s best to look at the cultural gestures from their connotative capacity (which probably still amounts to a variant of psychoanalysis). Put simply, Gaylord is the Maryland flag: loud, simple, but undeniably effective. It’s vernacular style is big and unmistakable even to people who have no idea what an Alpine village is. However, the ostentation and saturation of these big gables clearly betokens a coordinated effort. It’s very self-conscious, and, by even the most objective standards, impossible to view as organic or—to use the dreaded, overused adjective—authentic. Gaylord’s Swiss-influenced main street is distinctive but borders on kitschy. Of course, kitsch has rarely proven a death knell for the tourist economy. 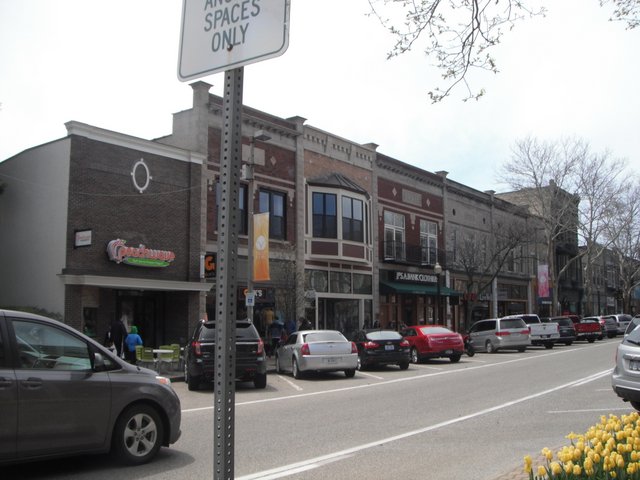 Conversely, Holland’s almost monochrome approach is undeniably subtle. I’m sure downtown has less conspicuous adornments that I didn’t catch, and I probably failed to spot all the trapgeveln the city has to offer. But the biggest demonstration of deliberate planning to attract tourists—a real collective consciousness—is the Tulip Time Festival itself, not the workaday appearance of 8th Street. (The fancy storefronts of 8th Street may be the consequence of successful tourist campaigns.) Furthermore, it’s not fair to complete the vexillological dichotomy by asserting that Holland is more like the humdrum flag of Pennsylvania. (Nor is it fair to assert that the gaudy Maryland flag is somehow phony or kitschy.) Holland’s lack of bling may vaguely evoke the modest, unassuming of the original Dutch settlers, or it may just be that, as the city slowly grew, only a few people involved in the built environment thought to instill something reflective of Dutch history. Maybe Holland, Michigan would elevate its cachet if property owners installed windmill blades along the roofline of every downtown building. And maybe the absence of such overt displays of cultural exploitation demonstrates that most residents of Holland are content with the city’s status quo. After all, the city’s most unmistakable embodiment of the Netherlands—the national flag—flies, confidently but never brashly, in Centennial Park, the central-most public square. 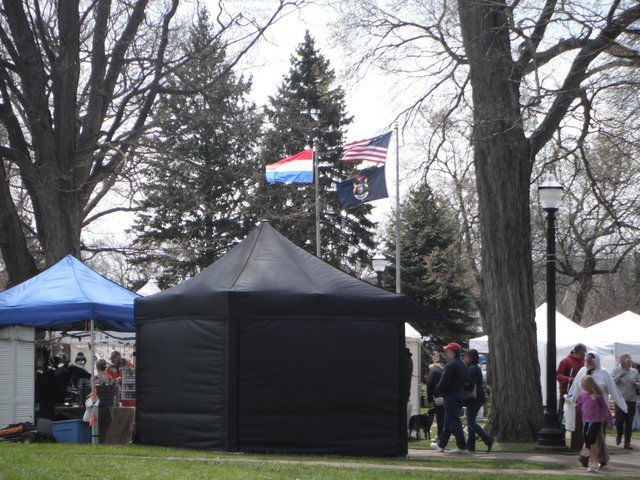 It’s there, to the left of the American flag. And most vexillologists would argue that it’s a pretty good flag: simple, direct, easy to interpret even when fluttering wildly in the wind. (Much better than the overly complicated Michigan flag below the Stars and Stripes.) But the three horizontal bars–known by vexillologists as fesses–in three very commonplace colors is hardly that original.  And it’s not showy. And it sure ain’t the heraldic banner of Lord Baltimore. Leave that to Maryland.

2 thoughts on “Some cultures go full bloom; others are happy to remain bulbs.  ”