If there’s any question at this point whether the shopping conventions of the 1970s and 1980s are still viable, all you need is to type “dead” followed by the desired retail type into your preferred search engine, and let it do its thing. Suburban mall, downtown mall, strip mall, lifestyle center, factory outlet, plaza. You can find boarded-up examples of all of them. Even the “festival marketplace” typology hasn’t always been a surefire bet—judging from the current perceptions of the Waterside complex in Norfolk–despite its relative scarcity. (The place is completely empty, and 35 years after it opened as a redevelopment initiative aimed at revitalizing the Norfolk waterfront, it is now slated for its own redevelopment.) And heaven knows I’ve explored a fair share of shopping sarcophaguses over the course of this blog’s life.

Chronicling the demise of conventional consumerism through ruin porn is cynical. And it has become far too easy to cruise down the information superhighway in search of examples of receding retail. Various websites, serving as portals to the intersection of leisure, commerce and socialization, come and go—much like the shopping centers themselves. Deadmalls.com is all but defunct; Labelscar hasn’t had a new entry in two years; Dead and Dying Retail may be a fair successor. But it’s hard for websites to keep up, when one considers the volume of closed shopping centers. (I’d like to think that I’ve held on to the subject pretty long, but dead retail is hardly my real bailiwick.) Rather than dwelling on the failures, though, it’s high time to point out those occasional successes, like this one: 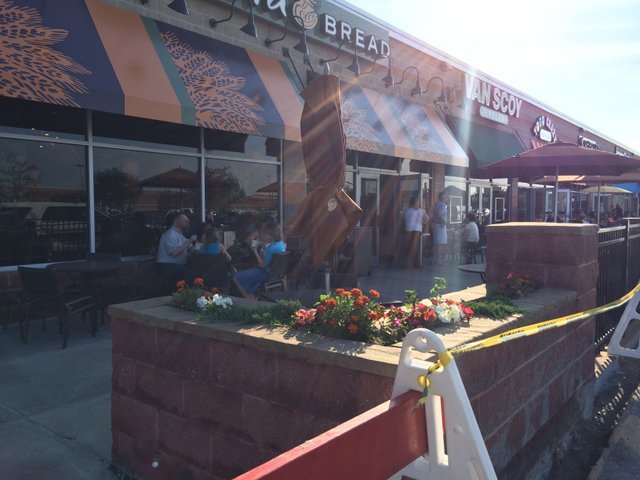 The Broadcasting Square Shopping Center rests along a prominent highway in Spring Township, Pennsylvania, a prosperous suburb of the embattled city of Reading.  What little information exists online indicates that it’s hardly new, having opened in 2000.   But most evidence would suggest that the Paper Mill Road corridor upon which it rests is the primary retail district for greater Reading. And Spring Township is the second most populous municipality in Berks County, behind only Reading. Yet while Reading suffered population loss through much of the 20th century (and, despite some rebounding, is still far off from its 111,000 peak in 1930), Spring Township has enjoyed double digit population growth for the last 25 years. 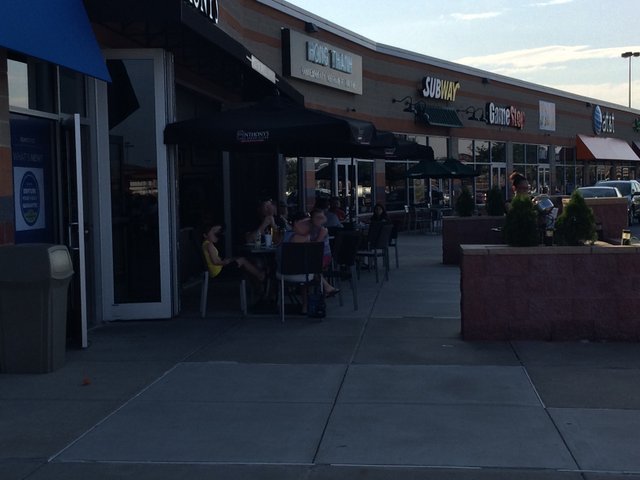 Maybe the Broadcasting Square Shopping Center is flourishing simply because it’s in a location with favorable socioeconomics, and because it’s still newish. But a fifteen-year-old shopping center is practically middle-aged in the hypercompetitive world of commercial real estate development, with its accelerated depreciation schedule and the consumer tendency to flock to the next big thing. On a Sunday afternoon in June, the restaurant row seen above was teeming with people. Is there something about the design that makes it special?

Not really. The past few photos were a bit deceptive, because they cropped out the streetscape abutting all these shops. Here’s what it looks like. 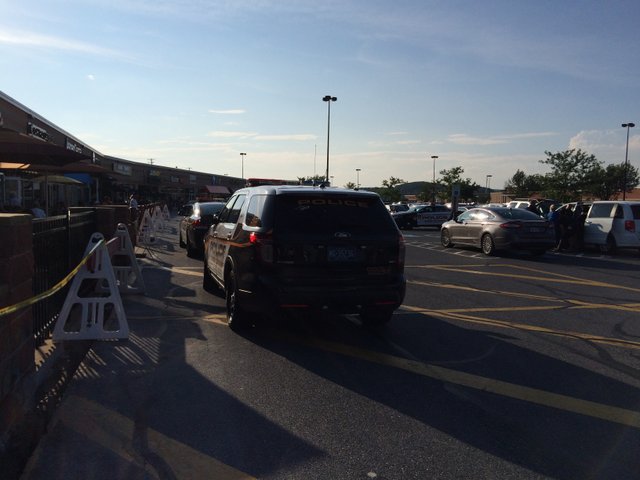 For the most part, it’s a conventional, auto-oriented shopping center, with an abundance of parking and an absence of any other non-commercial uses nearby. In fact, it more closely fits the definition of a power center, a retail typology that usually involves at least four or five large-scale big-box anchors and an abundance of smaller in-line tenants in strips, as well as some free-standing outparcel stores (banks, drive-thru restaurants, full-service casual dining). Power centers differ from conventional shopping centers only in the configuration: they are less oriented toward the major arterial road. Instead, motorists have to entire the complex, with parking in the middle and all the stores along the periphery, surrounding the customers on all four sides. Essentially, the stores in a power center orient themselves around a minor interior road, often dedicated exclusively for the purpose of the development itself. My only other reference to a power center that I can recall has been Fairlane Green in Allen Park, Michigan (a suburb of Detroit). They are growing in prominence, often at the expense of enclosed shopping malls.

So what makes this strip in Spring Township so popular? From my observations, the designers made some subtle decisions that attracted a handful of credit tenants. Notice the space between the parking lot and the door.

They added a “flex space” specifically devoted to al fresco seating for the approximately five months each year in Pennsylvania when it’s comfortable to eat outdoors. It didn’t take a great deal of extra effort or investment—merely a change in the paving surface and a squat brick wall with planters (the latter of which might be the responsibility of the tenant to maintain). But virtually every tenant in this portion of the Broadcasting Square Shopping Center is a fast-casual restaurant, including some very popular ones, like Panera Bread and the ever-booming Chipotle. On any afternoon when the weather is mild, the outdoor seating is a boon to most restaurant operators, since it offers a low-maintenance dining environment. My suspicion is the outdoor diners don’t generally stick around as long (certainly not at a Panera, where people often stay and use the coffee-shop atmosphere and free wifi for hours on end). I suspect they are also less likely to walk back in and demand modifications or extras to their food, so in many regards it’s a particularly easy clientele to manage.

Broadcasting Square’s pallid imitation of a Parisian café doesn’t come with much of a view, since this is the other side of the wall: 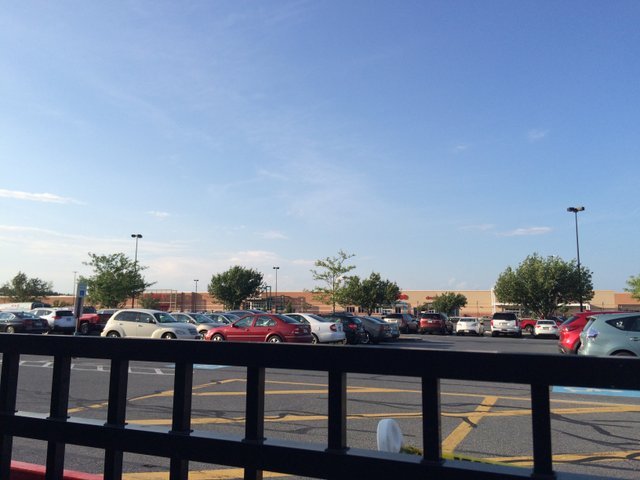 At least this way, while eating, they can make sure their car is safe from thieves or vandals in the enormous lot. Suburban America, dominated by the private automobile, craves any sort of shared, informal space for spontaneous social encounters, to they point that people aren’t very picky about aesthetics or atmosphere. Broadcasting Square doesn’t really have to do much, because it found the right way to align with current tastes. Where strip malls of 25 years ago might have included an “arcade” to provide shelter as a customer strolls from one shop to another, the contemporary designer realized, more than ever, that people do not window shop at strip malls. They arrive at the complex, park, walk to their single destination, then leave—particularly when it comes to restaurants. Unless one restaurant is full, why patronize another? By offering this space for al fresco dining, this portion of the Broadcasting Square Shopping Center pigeonholed itself for restaurants. It’s hard to find anything else in the strip, and the few non-restaurant offerings simply look strange, like this dental chain in the foreground. 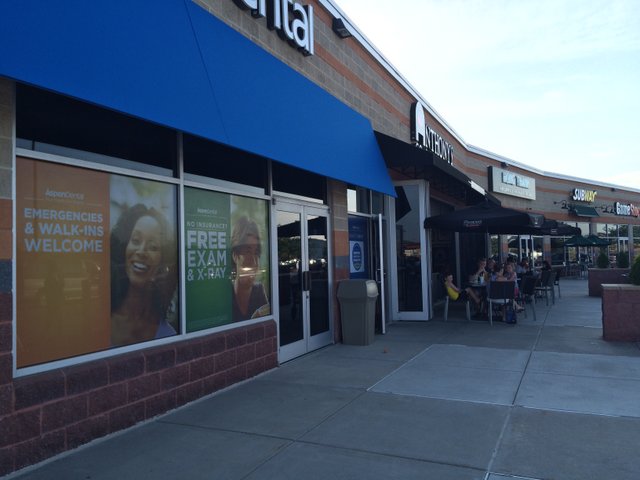 Will Spring Township’s restaurant row continue to flourish in another twenty years? I’m not optimistic. The popularity of most other shopping districts—malls, lifestyle centers, and even old commercial main streets—has waxed and waned, as Americans continually seek fresh milieus for asserting themselves as consumers. A Business Insider article from last year acknowledges that stalwarts like Walmart and Whole Foods are shrinking the median leasable space in their stores, as online shopping supplants more of the demand for merchandise on display. A power center like Broadcasting Square doesn’t appear threatened at the moment, but the typology it represents—big box and in-line retail configured to the car—is appealing but not surging. And power centers are a response to the diminishing success of the conventional enclosed mall. But what will they look like when the next big thing comes around? 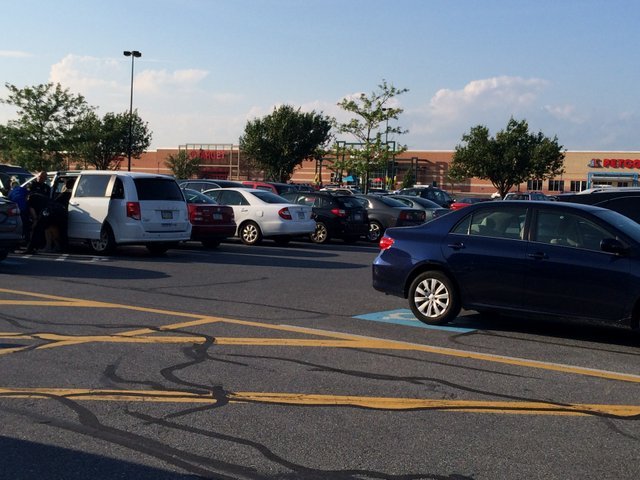 In comparison to most retail, restaurants seem to be hanging in there nicely. Commercialism and recreation depend upon one other to keep either from turning into a passing fad, and dining out achieves such a symbiosis. After all, the experience that a restaurant provides is hard to replicate on a laptop in the living room, thereby explaining the restaurant industry’s relative resiliency. People are happy to spend money to get served food. The developers of Broadcasting Square deployed the right design tweak to attract restaurants, which in this day and age are among the most reliable tenants. Good for them. Still, nobody is insisting that Chipotle, Panera, Subway, or Anthony’s Coal Fired Pizza occupy the same strip mall forever. They could just as easily find storefront space along the already healthy, pedestrian-oriented old Penn Avenue in West Reading, a stable little inner-ring suburb just a few miles to the east, which looks like this. 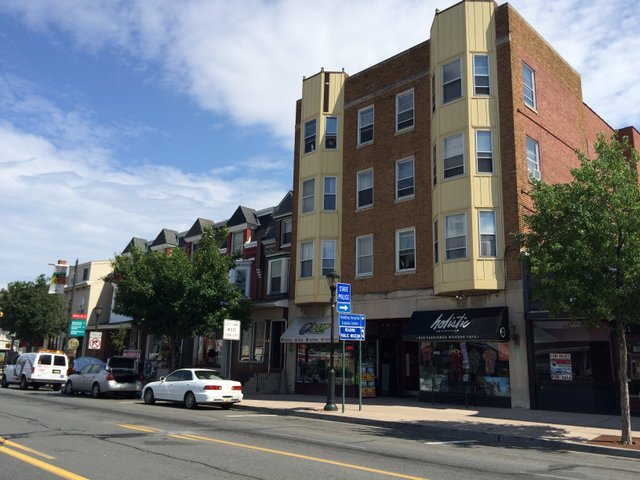 Or another patch of greenfield land in metro Reading might lure them. Either way, power centers are not immune to the fate that has befallen every other retail typology—with or without the restaurants. And, when a big box “campus” closes (and a campus is essentially what we’re dealing with in a power center), it may be a far bleaker sight than the shuttered festival marketplace on Norfolk’s waterfront. And a dead power center will probably get featured in a photographic exposé on sites like deadanddyingretail.com. Or dirtamericana.com, for that matter.

2 thoughts on “Paris with parking.”