Getting back from the groove.

I deliberately didn’t put too much thought into the above sentence; I wanted it to emerge as spontaneously and organically as possible, then to judge it afterward. In hindsight, I would only change one word: sometimes. Replace it with “usually”. (But not “always”—even at my most impromptu, I know it’s best avoid lethal words like “always” and “never”.) Regardless of the opening adverb, few initiatives can elicit such broad and immediate consequences as changes to national infrastructure. And few are as high-profile as interventions to the American road network. And, usually, these interventions hit a few snags.

The most popular means of transportation—the private automobile—is among the most dangerous, with a higher rate of fatalities per billion miles than airplanes, vans, buses, trains, or just about any motorized vehicle besides motorcycles.  (Incidentally, most studies also suggest that, while motorcycles are consistently ranked number one for fatalities, biking and walking typically vie for two and three.) Bearing this in mind, it is no surprise that most state, federal and municipal transportation departments are more than willing to invest huge amounts for innovations that might reduce the likelihood of vehicle collisions. I’ve blogged about physical improvements to enhance road safety in the past, particularly in reference to the variant on Botts’ dots on a highway in southeast Arkansas. These little bumps are embedded reflectors that guide drivers at night to the edge of a travel lane. (They’re sturdy little gizmos, and when a car runs over a protuberant one, it makes an atypical skipping sound.

And now, in rural Rhode Island, an even more familiar advancement in road safety: the rumble strip. 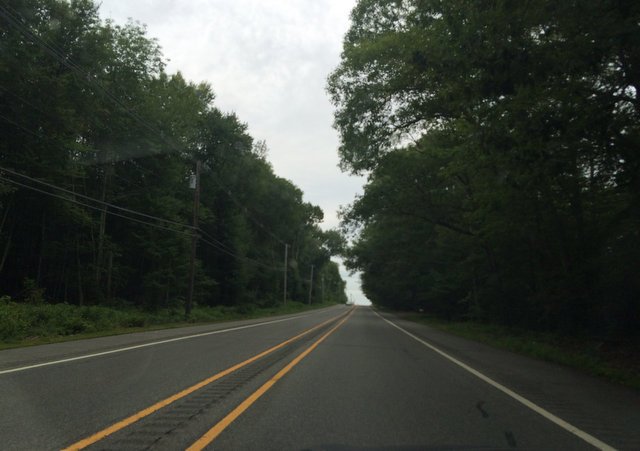 By this point, even people who don’t know the term “rumble strip” can still determine what I’m talking about from the photo. They refer to a variety of strategies for altering the paving surface to create an effect of corrugations. And when tires run over them, they elicit an obvious vibration and sound. They intend to alert drivers of a possible hazard, often involving a pronounced change in traffic flow (such as an impending tollbooth), or, in this Rhode Island case, an alarm call if the driver strays too far onto the shoulder, where the rumble strips are most clearly visible. Within the last ten to twenty years, rumble strips have become ubiquitous on the edge of roads, proving a low-cost and effective means of reclaiming a sleepy driver’s attention. The centerline rumble strip on U.S. Highway 6 in the photo above is far less common, though on a windy, two-lane, rural highway—a notorious environment for serious car accidents—they may prove particularly useful at keeping vehicles in the appropriate lanes. I suspect it’s only a matter of time before centerline rumble strips are as common as continuous shoulder rumble strips.

Not everyone’s a fan, though. 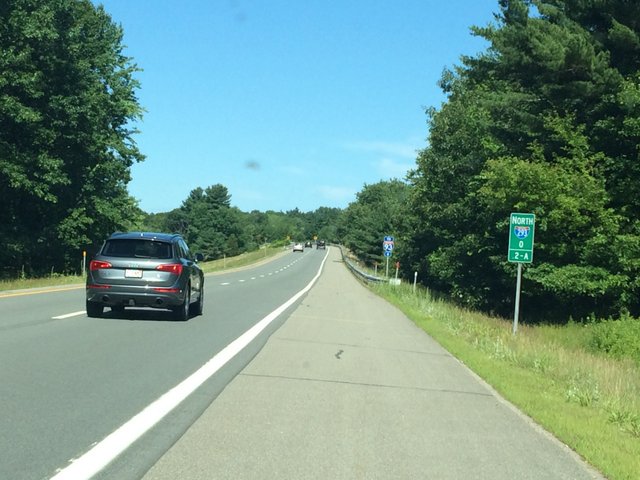 In the above photo, from Interstate 93 in southern New Hampshire, rumble strips are not even visible—certainly nowhere near as conspicuous as on the Rhode Island highway. It’s almost impossible to tell if anything exists that can distinguish the shoulder from the lane. But evidently there’s something, manifested by a sign a little bit further down the road. 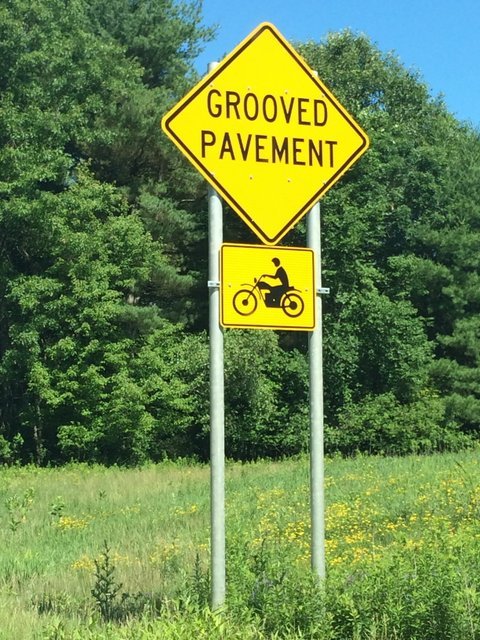 If you’re on a motorcycle, rumble strips aren’t likely to prove the most welcome safety feature. This sign, in fact, specifically warns motorcyclists of the change in texture, because, apparently, if the tires hit these grooves at just the right angle, it almost makes the bike feel like side-to-side traction is gone, a bit like fishtailing. Plus, according to an old forum from way back when, the grooves slightly impede breaking ability. None of the conditions are enough to pose an imminent threat, but they can be alarming and perhaps slightly less safe for the inexperienced biker. And I’ve already discussed how motorcyclists are already among the most dangerous means of getting from A to B. Bicyclists, meanwhile, have it even worse: they can easily lose control if they wedge their tires into a rumble strip, and I have no doubt the fishtailing sensation on grooved surfaces is even worse for them. While people aren’t usually allowed to bike on interstates (at least in the eastern states), the shoulder is typically the safest place for bicyclists on any other major thoroughfare. But continuous shoulder rumble strips often occupy the exact path where it’s safest for bicyclists to share the road. 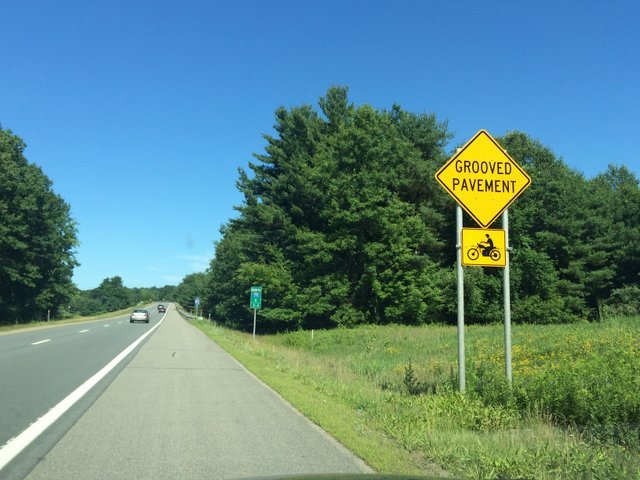 I must admit that, when I first saw it, I thought it was a testament to New Hampshire’s libertine road culture. After all, it’s one of just three states lacking a helmet law. And it’s the only state that still lacks a seatbelt law for adults.  At the time I took these photos, I thought new Hampshire might be allowing cyclists to bypass other motorists during traffic jams by careening on past them along the shoulder, and the road sign was just a courtesy.

But no, it’s actually a warning sign protecting certain users from yet another warning device. The New Hampshire Department of Transportation apparently felt impelled to install them to eliminate any motorcyclist panic caused by shifting onto a surface that affects them much more powerfully. As effective and cost-efficient as rumble strips or other tactile warning devices tend to be at alerting drivers of certain conditions, they lack the ability to denote a specific message the way a sign can. And, in the process of conveying a message, the emotional response (sudden alarm) can prove more dangerous to some users than the subject of the alert. Thus, not unlike my parking restriction sign from a blog of few months ago, the message has varying degrees of communicative power, depending on the recipient. But isn’t that always the case? The pros and cons of rumble strips clearly depend, like everything, on the context. Governance and law, at their most sincere, attempt to establish as subjective of a standard as possible by reconciling the diverse array of subjective experiences.

But, in most cases, there are as many subjective experiences as there are people. Let’s return to that centerline rumble strip in Rhode Island, which apparently begins at the point captured in the photo below: 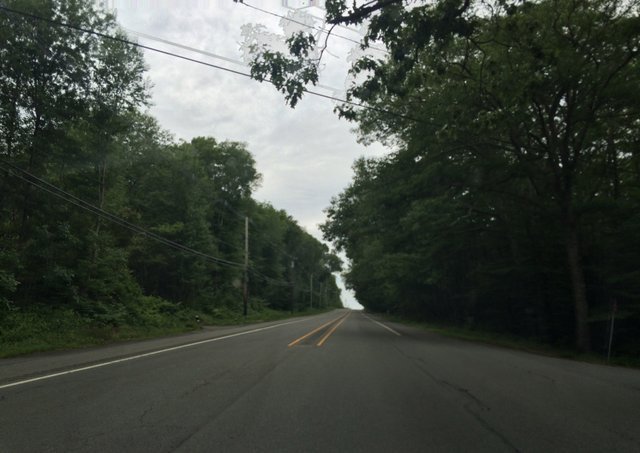 Even though the safest option for bicyclists on a rural road such as this is to drive along the shoulder (which, fortunately, is typically generous on most Rhode Island highways), apparently a growing number of bicyclists have complained about the centerline strips. Why? Because normally, when cars overtake cyclists and must pass them, they have no problem cutting across the centerline. But with the rumble strips installed, motorists become reluctant, forcing them to remain in their lanes and cut closely when getting past that bike. So, even though rumble strips quite deliberately channelize the driving experience for safety purposes, it also pins them in for those rare reactionary moments when they might need flexibility. Unintended consequences. Ultimately, these handy little grooves are just a microcosm for the fundamental imperfectability of civilization. But we all knew that’s where I was headed already, from this blog’s opening sentence. It’s the direction I always end up. Not always—usually.

4 thoughts on “Getting back from the groove.”