Hustling all the antiques under one roof.

Even metros with the most resilient of economies couldn’t salvage many of their historic buildings downtown during the 1970s, the virtually undisputed nadir of urban America. The imbroglio facing most cities wasn’t just a lack of investment—there simply wasn’t even any psychological interest. (Not surprisingly, “interest” and “investment” go hand in hand…in more ways than one, semantically.)

In hindsight, we can ponder on the decade—that it must have been an awful time to live in a city, and while most people at the time acknowledged that urban America wasn’t looking so hot, no one held much prospect at the time that it could get better. Lacking any context, it was impossible to say back then if it really was as bad as it could get. We held no hope for those old brick warehouses from the 1880s. Sturdy as they are, majority opinion a century later was that they were a waste of space.

The same could be said for the commercial and office buildings from the same era. By the 1970s, anything without adjacent dedicated off-street parking seemed like an anachronism. Civic leaders at the time simply couldn’t conceive of an era when these structures might enjoy a renaissance. So, far too often, against the protests of a barely-organized historic preservation movement, the City either approved private demolition, or paid for it with taxpayer money. In its place? Often little more than an asphalt parking lot. And those are just the casualties we’re aware of, because a vacant lot is such a strong reminder that something prouder once stood there. Less conspicuous—often deliberately so—are the multi-story parking garages, which usually replaced old structures deemed undesirable at a time when planners and civic leaders often perceived that the key to revitalizing downtown was making it more accessible—i.e., endowing motorists in the suburbs with cheap, abundant parking.

Amidst this ethos, toxic as it may have been toward the built environment that made downtowns so central and so pivotal, usually a handful of great 19th century buildings remain. In smaller cities, the surviving fabric may comprise no more than a few blocks. Those few blocks, however, can define a place. This is exactly what has happened in Grand Rapids, whose downtown generally enjoys accolades from visitors for its well-preserved buildings and active streetscape. 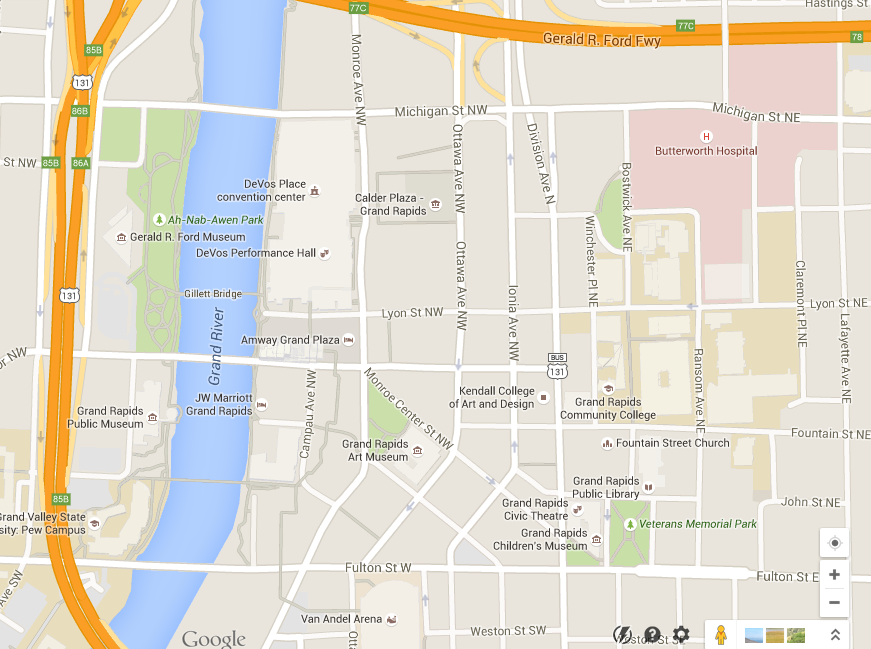 This Google map roughly frames downtown. But the pulsing heart of the city—the area with the highest volume of pedestrian activity, of active storefronts and visible nightlife—is that triangular district where the street grid splays out at a 45-degree angle from everything else. A block or two south of Fulton Street also flaunts some of that verve, but it tapers quickly. And north of Lyon Street is pretty inactive after 5pm. But a few blocks of contiguous energy is all it takes to shape the character of a downtown, and, since that triumphant triangle is more than most similarly-sized cities in the Midwest can claim, Grand Rapids justifiably earns the reputation of having a healthy, flourishing downtown.

It doesn’t hurt that this vibrant core is home to an astonishing assembly of well-preserved commercial buildings from the late 19th century. And the Ledyard Building stands proudly as a centerpiece. 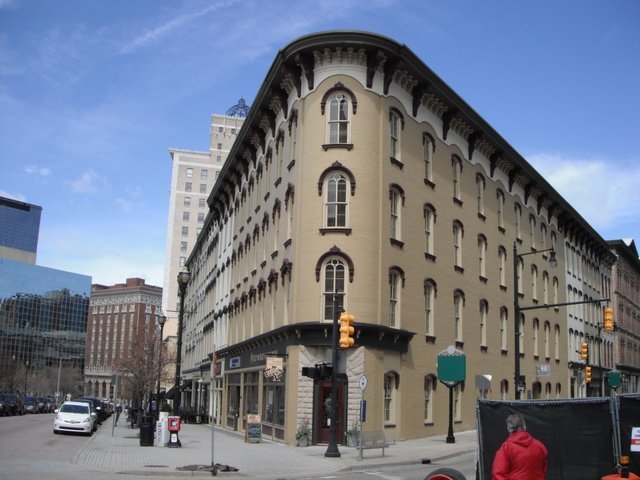 This view, at the intersection of Ottawa Avenue and Monroe Center Street, provides the best vantage for demonstrating the “flatiron” massing that, no matter how frequently imitated after its Manhattan progenitor, consistently manages to arrest the eye. But the building’s footprint is much more than the wedge most commonly associated with this beloved architectural gesture. 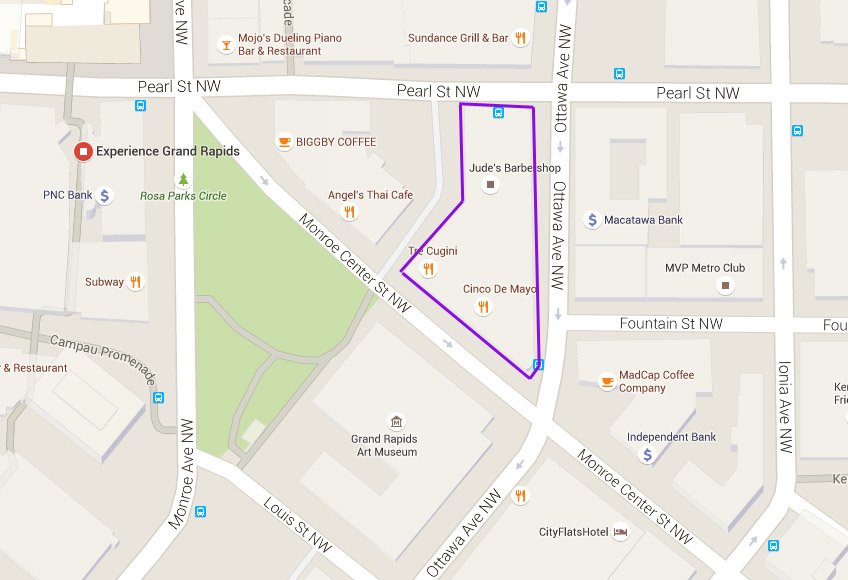 In fact, most local references to the area use the term “Ledyard block”, even though it evidently only comprises half of the triangle formed by the intersection of the two grids, as seen in the purple outline from the above map. But even though the Ledyard Building does not comprise its entire block, it feels like it does. Notice how strongly the taupe asserts itself against its own cornice line, from this humbler photographic vantage point. 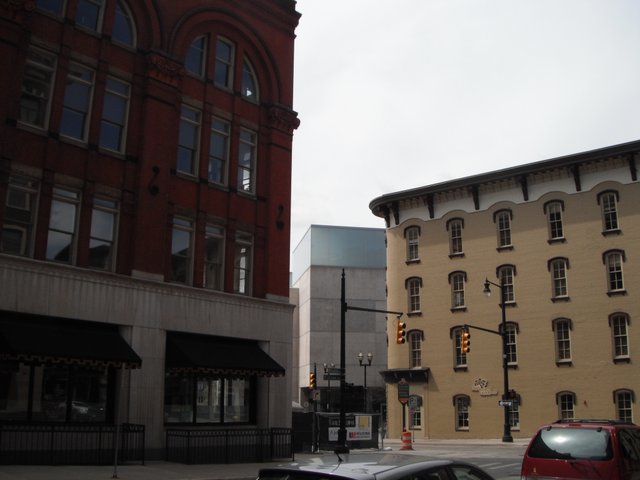 The building’s majestic scale only reveals itself when an entire block becomes clear, like this view along Ottawa Avenue—the most expansive façade. 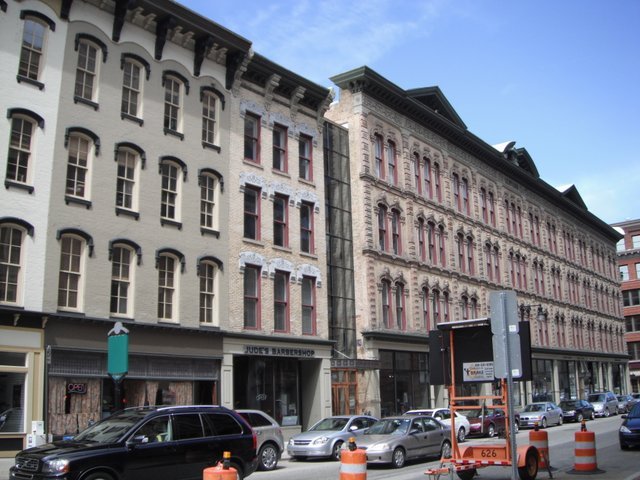 But all is not necessarily what it seems. It doesn’t take more than a cursory scan along the photo above to discern some competing textures. The brackets differ along the cornices, window lintels vary greatly (as does the shape of the glass), and the façade colors change multiple times. It’s almost like they’re different buildings. And then there’s that main entrance. 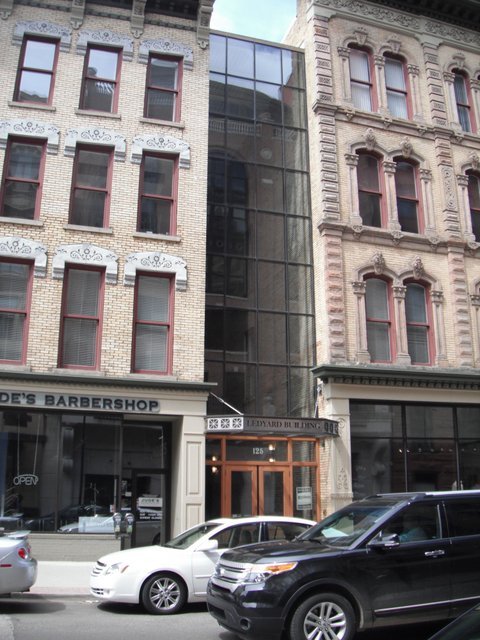 The attractive doorway supports three more stories of glass panes that serve as a mini-atrium. From the exterior, the glass fills a chasm in the street wall, creating continuity to the massing that otherwise wouldn’t be there.

But why do this? By now, it should be obvious: the Ledyard block is several buildings, which, through subtle additions like the atrium on Ottawa Street, have fused into one sprawling complex. Remarkably little on the Ledyard is available online, but the current owners of the property, CWD Real Estate Investment, have provided a brief history through a capsule slide show.  According to this presentation, it’s the second oldest surviving building in Grand Rapids, founded in 1874 by William Ledyard, a prominent banker. It became home to the central public library shortly thereafter, but it had fallen into disrepair by the turn of the century, necessitating renovations in 1919.

Those renovations, quite naturally, involved modernizing the building to the standards of the time—standards operating within a context in which downtowns were still central to urban commerce. By the early 1980s, it didn’t matter what shape the Ledyard Building was in—downtown Grand Rapids, like virtually every downtown in America, has surrendered its cogency to the suburbs. CWD Real Estate reports what may be the most critical for the purposes of this analysis: further renovations in the 1980s involved the consolidation of “seven formerly separate buildings”, giving rise to what people know today… 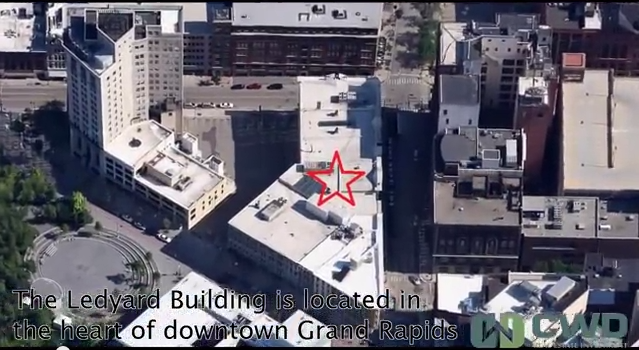 The aerial photo above comes from CWD Real Estate’s presentation on the building. And it doesn’t take 20/20 vision to see the sutures among the paved roofs. Apparently, the most ornamental of the façades on this block is the Ledyard building by name, indicated by structure to the right of the glass atrium entrance in my two photos above and further reaffirmed by this link, courtesy of CWD.

The rest of it? Part of the architectural reconstructive surgery necessary to ensure the entire block’s viability as something other than a parking lot, during the Dark Period of American Downtowns (circa 1965 to 1990). I can only speculate on exactly what necessitated the consolidation of all these individual structures into one contiguous campus, but my suspicion is that the smaller structures on this block were among the most vulnerable. In 1980, the commercial structures of 1880 were particularly obsolete relics of already stale, non-competitive downtowns. Competitive businesses needed space to grow, not only with explicit, contemporary interior amenities—like central air and restrooms on every floor—but broader, abstract qualities, such as modern standards for accessibility (i.e., convenient, cheap parking) and safety (securable entrances in a low-crime district). Most 19th century structures simply couldn’t align themselves with late 20th century business practices, without monumental physical changes. Though I have not determined all the various private/public allegiances that allowed the Ledyard Building to morph into the Ledyard Block, I suspect that, whatever aesthetic compromises took place, the result we see today is far better for Grand Rapids’ downtown than any of the alternative scenarios.  The finished building–or buildings–assimilate almost seamlessly with the rest of downtown, as demonstrated by this photo from a neighboring office window, courtesy of reader Timothy Wolfer: 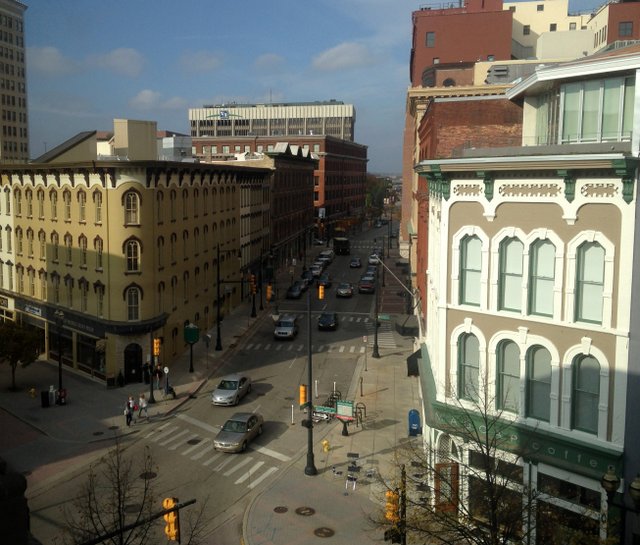 As of 1983, the Ledyard Building entered the National Register of Historic Places. I’m uncertain whether the consolidations and alterations would fit the more stringent standards of the National Register today, but, for the sake of Grand Rapids, it probably doesn’t matter. A cluster of the city’s most iconic buildings avoided a fate that befell similar structures in many other peer cities. The timing was right for Ledyard building. I have heard from hearsay that, unlike most Midwestern cities, downtown Grand Rapids didn’t reach its trough until the 1980s—that it still had a fairly active downtown in the 1970s before the local furniture industry collapsed. If this is true, it may explain why the Ledyard Block survives today, since, by the 1980s, the first whispers of revitalization through preservation had begun to resonate across the country, after a handful of successes amidst the rampant demolition in the 1970s. Civic leaders in Grand Rapids could have passed resolutions with better urban intelligence in 1982 than they would in 1972. Regardless, all eight buildings in the Ledyard “Block” stand as a tribute to a city that, by most visual evidence, has a leg up on its peers not just in preserving its architectural history, but in cultivating a once-again flourishing little center to its metro of one million persons…and growing.