Fuel for the stomach and the economy.

This article effectively piggybacks on its predecessor from this blog. Earlier this week (at least in my article), it became clear that the independent brewing scene is now fully cognizant of its own subculture’s intrinsic value. Back when they were untested and high-risk, most craft breweries started in what may have seemed like the path of least resistance: old, sturdy, underutilized industrial buildings in depressed urban areas. Now they’ve moved both to suburban strip malls and, as my Braddock, PA study indicated, the commercial main streets of impoverished inner-ring suburbs. They can succeed just about anywhere.

Across most of metropolitan America, the independent dining scene seems to be enjoying a similar awakening. In most small or medium cities, just ten years ago, a fancy night out might equate to a trip to that faded long-running steakhouse on the west side of town that dishes out far better table service and nostalgia than entrees. Today, such metros usually claim at least three or four fashionable outfits with a sous chef straight out of culinary school—and often many more. (And that old steakhouse either had to up its game or call it quits.) Rarely are these new restaurants about nostalgia; most have paid for a chic, contemporary interior design. On occasion, the interior will subtly offer a hat-tip to another era, but, more often than not, that era pre-dates Baby Boomers. In other words, it evokes a time period that almost no one today can remember. These new nosheries eschew anything that indicative of the stuffy self-importance of conventional fine dining; leave that to the old, faded steakhouse. Additionally, their interiors rarely offer cues to a specific geography; to do so would be to suggest their cuisine ties to a certain ethnicity, but the typical ethos of the independent restaurant scene is deliberately trans-ethnic. “Eclectic” seems to be the buzzword du jour, though “fusion” is almost as popular. And “edgy” is almost timeless.

Most of these descriptions so far suggest that the new wave of indie restaurants will break the bank. Not so. The prices at these restaurants, though hovering above the bill for a casual American chain like Applebee’s, still fall within the range of upper-middle affordability. Most of the eateries, run by Gen Xers or Millennials, cater to their own generation, who, although professional and certainly comfortable, generally lack the deep pockets of their parents (or grandparents). Most conspicuously, these independent restaurants are benefitting from an explosion of self-proclaimed foodies. So, with few exceptions, there’s an expected look and style to these establishments that apparently has not yet—but probably soon will—tread into the domain of cliché. While each new restaurant tries to distinguish itself, their shared goal of avoiding anything old-fashioned or parochial results in self-consciousness that ultimately ties them together. The overall vibe at many of these “American eclectic” eateries is alarmingly uniform. So it’s up for the food itself to offer something unique. In the meantime, the indies keep piling up, promising the next big thing to its comfortable-but-not-rich clientele. They’re ramping up the competition until that bistro bubble bursts.

It would be unfair for me to continue any more generalizations about the aesthetic to indie dining without offering some photos as an example. Here’s a common look: 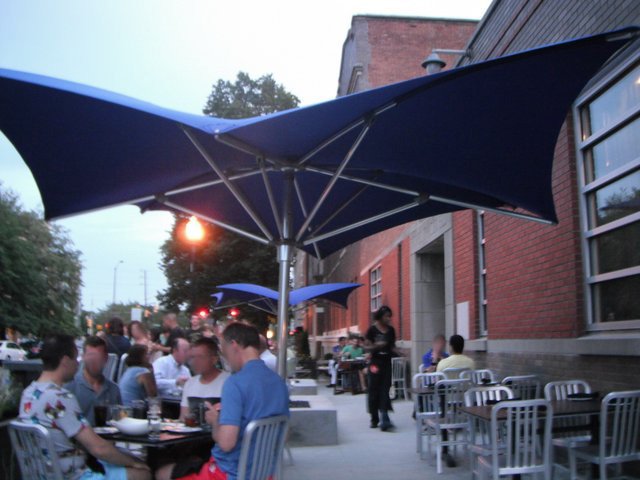 The trendy restaurateurs seem to prefer the old, repurposed buildings in urban settings…just like their microbrewing cousins. The operation featured in the following photos (which, unfortunately, are again of terrible quality, but still get the point across) sits on a collector street just a bit northeast of downtown Indianapolis, in Chatham Arch, a fashionable neighborhood where new development and retail has exploded in recent years along the commercial spine, Massachusetts Avenue. This eatery, less than a block off of the avenue, took an old union hall and repurposed it into a New American dining establishment, with a bar and live music stage.

It even named itself after the hall, which should be a dead giveaway to many Indianapolis readers who might be able to make out the blurred photos. It’s the first restaurant to occupy the building, with an old professional union having preceded it. For the same reasons the craft breweries succeed so readily, this restaurant has effectively cultivated a simulacrum of cool to a population that rapaciously seeks it. Sure, this could easily have happened in the suburbs, and now and then, one finds an edgy independent restaurant out among the megachains. But the city is still the preferred locus for most restaurateurs, not just because of the symbiosis of cool buildings/cool people, but because of all the other things an urban environment affords: density, walkability, a mixture of uses—in short, a far greater propensity for spontaneous human encounters than you find in the rarefied hinterlands. And in a city like Indianapolis, where the supply of old urban districts is relatively limited when compared to Boston (for example), these types of spaces come at an even higher premium. After the Bricklayers, Masons and Tile Setters Union departed the building in the photo above, it came as no surprise that a foodie entrepreneur would take over and transform it. After all, it’s a cool old building in a cool part of town. (And, ironically, it’s not even all that old: erected in 1950, it post-dates the vast majority of other buildings in Chatham Arch.)

But here’s where we also witness where the microbrewers and the restaurants diverge somewhat. Their ingredients for cool aren’t quite the same. The earliest craft beer efforts typically began in forlorn industrial buildings—areas with little other activity, where lax zoning regulations allowed a variety of higher-intensity uses, such as the manufacture of beer. Conversely, restaurants are a by-right use in most non-residential zoning districts, and the typical restaurant owner would prefer to locate in an area with high visibility. They often cluster along “Eat Street” restaurant corridors. The tendency for restaurants to thrive in higher density areas means they also routinely suffer parking shortages. In a city like Indianapolis, with weak mass transit and a relatively new culture of urban living, many of these patrons will still drive to the hip eateries. And so, at this converted union hall, we may see a lively streetscape with al fresco dining from the street level, but that’s not really how the place orients itself. Parking is in the back, and, for such an urban setting, it’s pretty enormous. 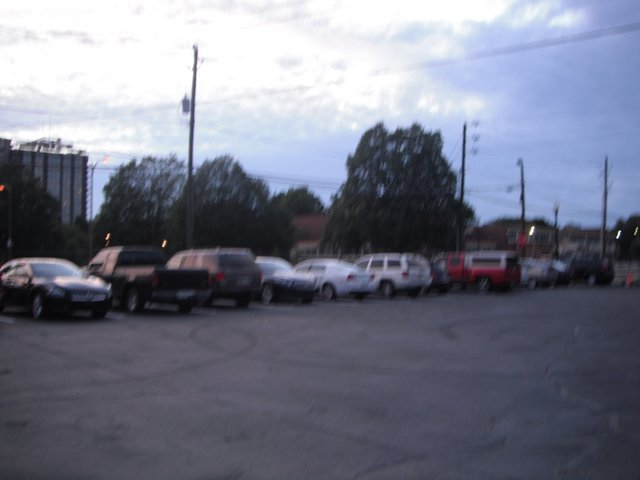 By Indianapolis standards, on-street parking in the Chatham Arch neighborhood is somewhat limited. So most patrons will approach this restaurant by off-street parking lot. 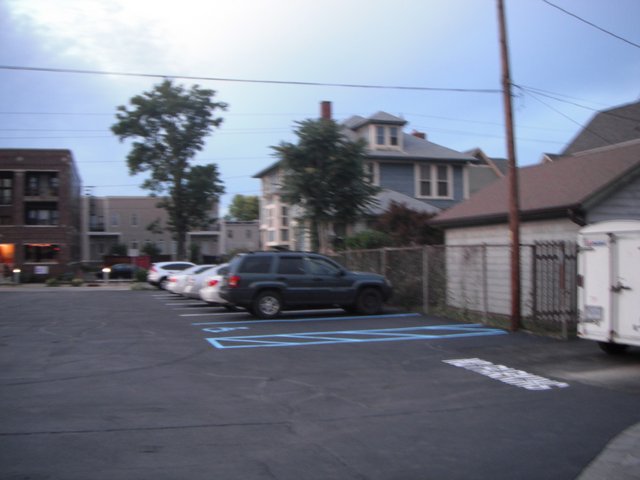 Pivot to the right from the above photo and the clearly articulated walkway directs patrons to the entrance. 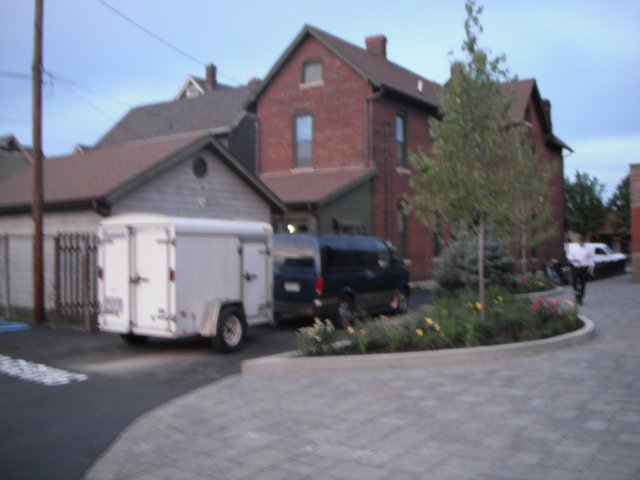 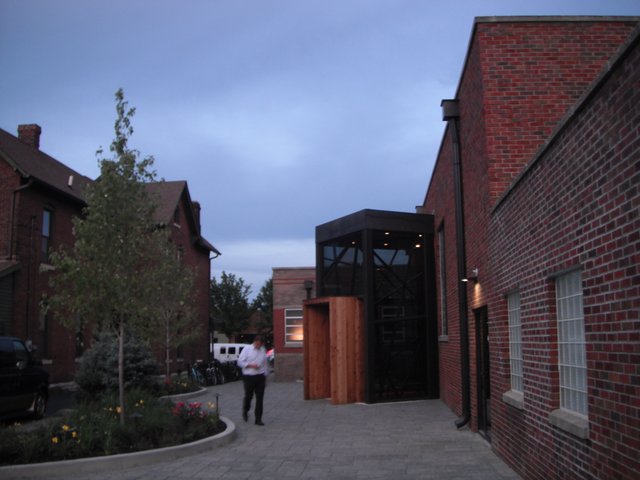 And there it is, to the right of the gentleman—and on the side of the building. Meanwhile, the front and street-level entrance? Continue down that same walkway, then turn the corner and see. 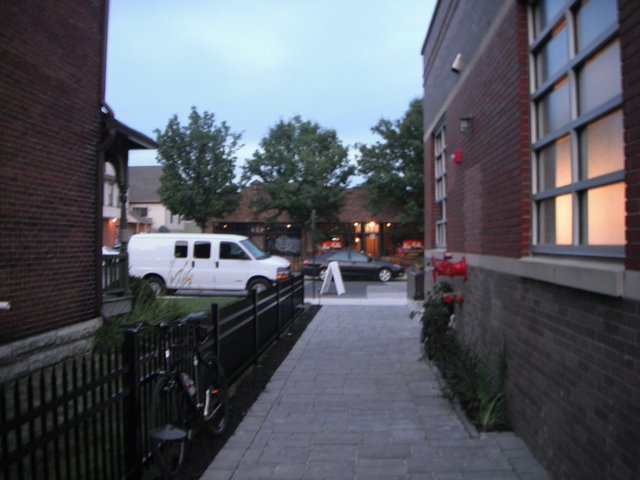 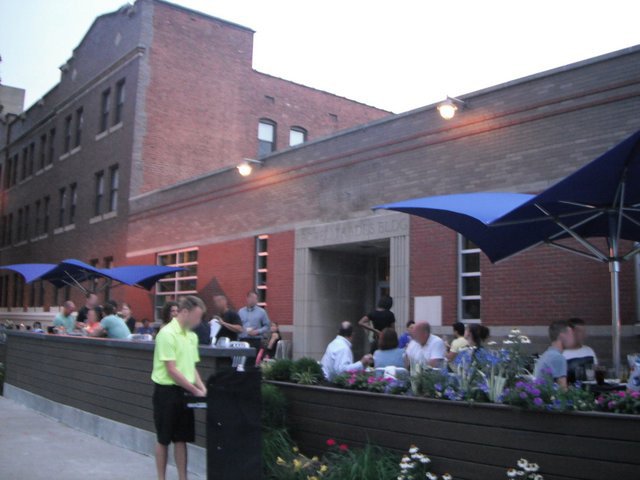 What would pass as the building’s conventional main entrance is essentially a reserved space for patrons who have already secured a table through the host. A midrise barrier separates the outdoor seating from the general sidewalk, thereby discouraging new arrivals to the restaurant from entering this front door. They go through the side door, an entry far more convenient to all the people using the parking lot.

Nothing wrong with this configuration, but it shows how the shrewdest restaurateurs know they must still find a balance between urban chic and suburban convenience. It’s also commonplace in cities with nascent downtown populations, like Indianapolis. An more conspicuous example just a few blocks away is the Marsh/O’Malia’s, a successful grocery store occupying the first floor of an old Sears Roebucks building. 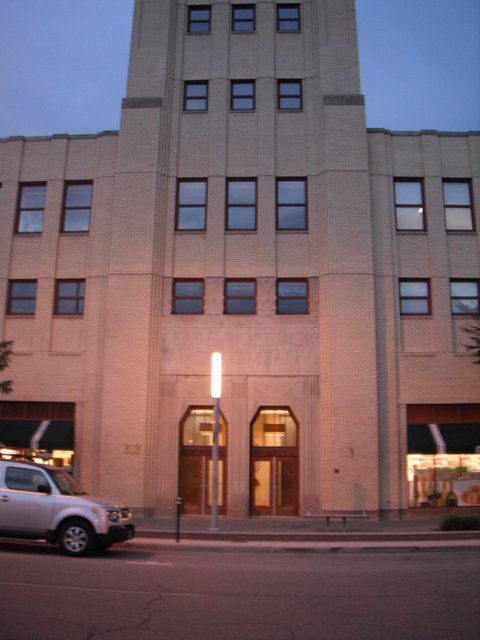 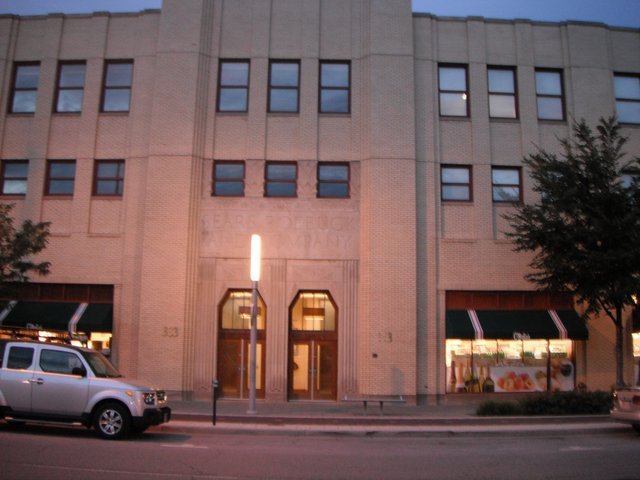 Pictured above is the historic street-level entrance to the old Sears. But it’s not a permitted entrance these days; emergency fire exit only. The customer entrance is around the corner, in the back. 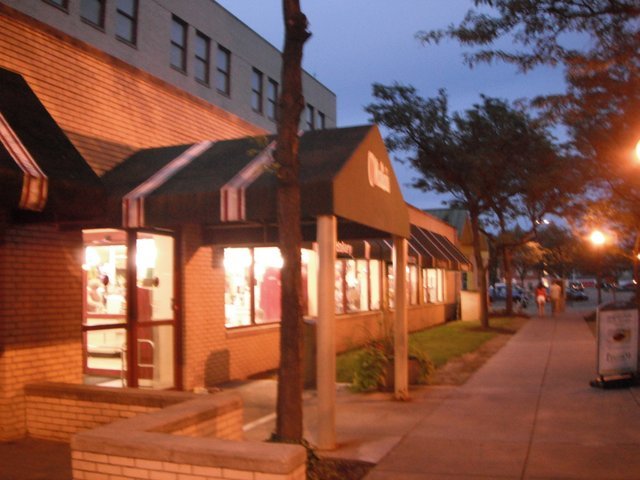 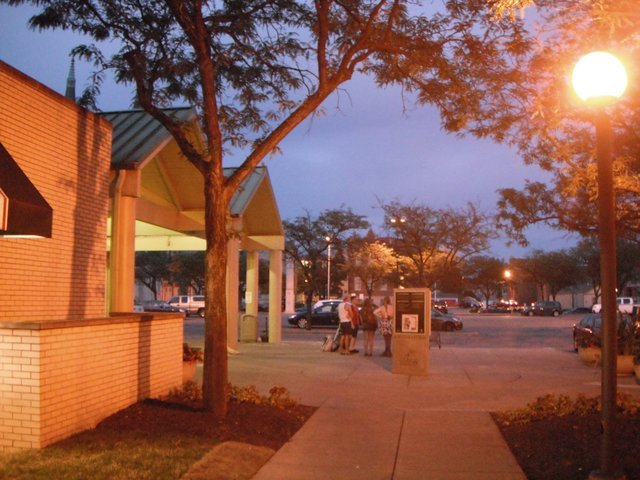 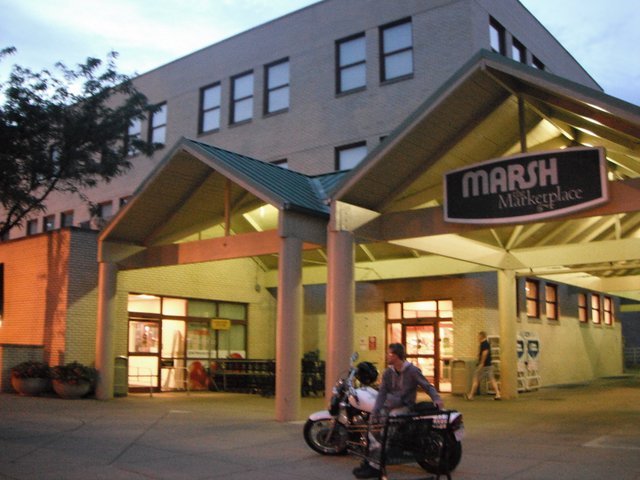 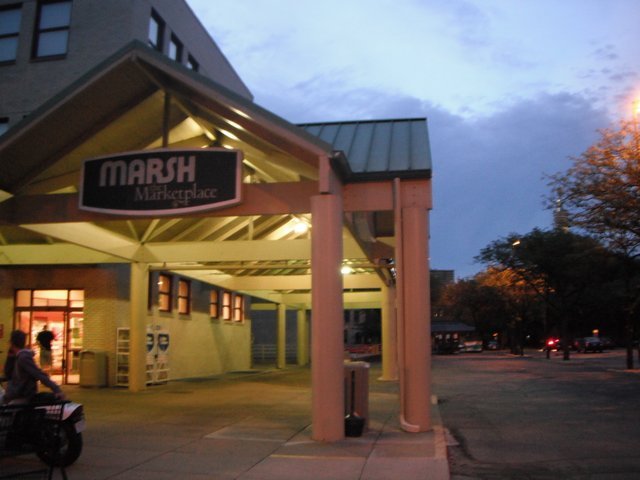 And it provides safe access to another expansive parking lot. 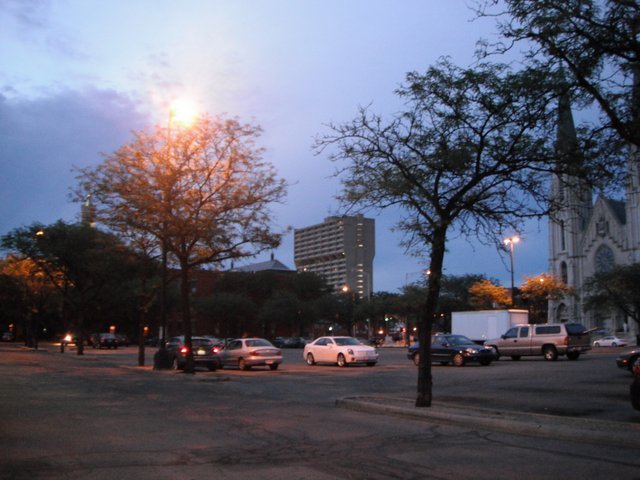 At the moment, restaurants and craft beverage producers seem so pivotal to successful downtowns that any arrangement in an urban setting should suffice. In fact, food and drink seem to be the only surefire bet, so restaurants, bars, grocers and brewpubs have dominated at the expense of almost all other retail. An ever-growing percentage of people are getting all their durable goods through the internet, seriously eclipsing the clothing boutique, the bookstore, the shoe store, or the home furnishings store. With each passing year, the bars, grocers and restaurants have come to dominate the country’s most vibrant main streets.

I’ve already prognosticated on the food/drink bubble bursting multiple times. Eventually the weak brewpubs will fail. But at least they have a fairly high profit margin and can demonstrate elasticity of demand when it comes to location. Restaurants, meanwhile, are notorious for their low profit margins, making them ultrasensitive to location, convenience, and quality of the presentation. Urban settings may prove a boon for indie dining well into the future, but the restaurants most likely to prosper will demonstrate an awareness of the complete dining experience, which includes ease of parking. Even if the current culinary innovation at the old Indianapolis union hall fails, the building’s well situated to house another restaurant. And as the internet crowds out most other retail, the restaurants/breweries are looking more like the sole survivors. After all, their identity depends on an experience…an experience that no amount of online shopping will ever duplicate. As long as they remain a “fusion” of “eclectic” and “edgy”, they should prevail. And it doesn’t hurt to serve some “artisan” bread.

PrevSudsy strategies.
Hustling all the antiques under one roof.  Next

2 thoughts on “Fuel for the stomach and the economy.”