Considering the ridiculous number of blog posts in public restrooms, someone eventually is bound to give me a cyber-swirly. Whatever that is. Hopefully it’s the worst that happens to me, considering most people’s attempt of shutterbuggery in the loo results in a call to law enforcement. Would it help if I came up with a better term than “shutterbuggery”? I’d like to think my toilet-photo blog posts are perfectly innocent. And, yes, here’s the latest: 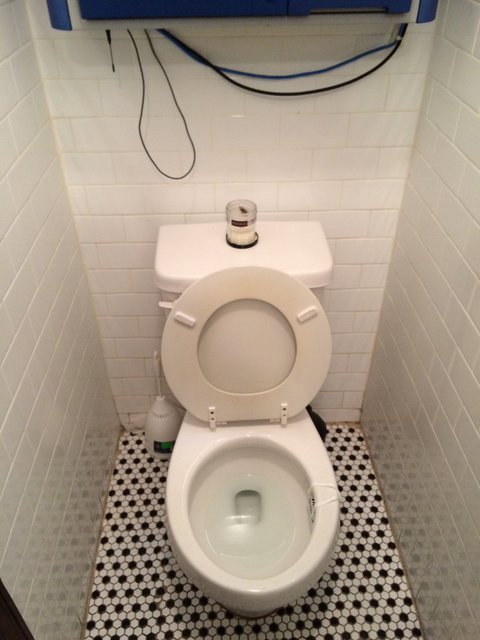 So it’s another toilet. Looks pretty normal. But what are those wires hanging above? 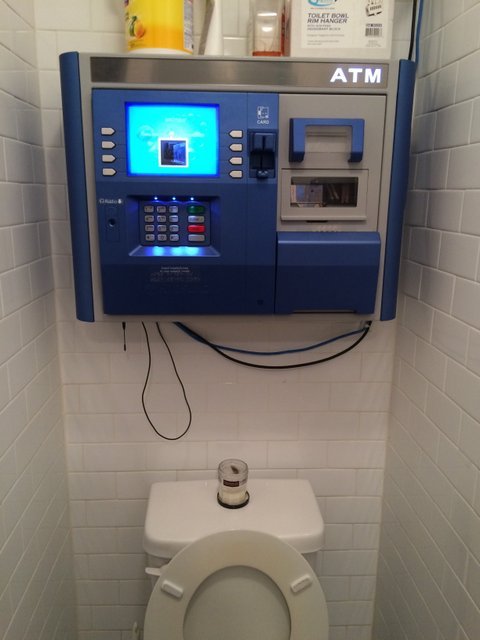 You see the big letters on the upper right? Yes, it’s an ATM. In a restroom for one. At a restaurant that isn’t ashamed to admit it. 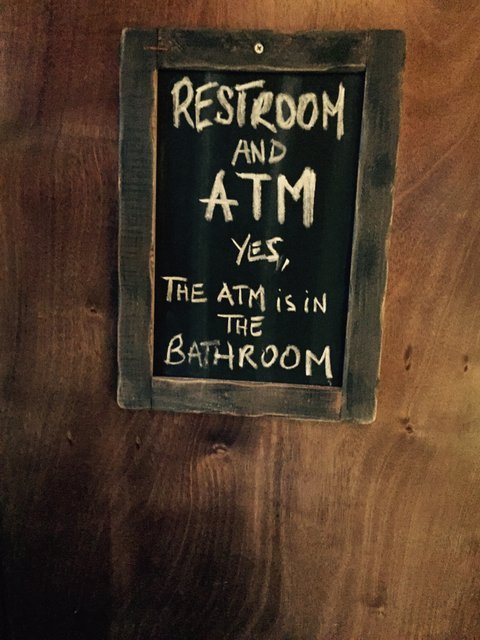 Care to guess what city this is?

If I offer a fairly obvious hint—that it’s not an Asian city—does that give it away? Maybe it doesn’t, but at any rate it should come as no surprise that it’s New York City. After all, in what other American city does space come at such a premium?

Brooklyn, where one finds this bathroom ATM, has really asserted itself as the epicenter of what I call a “petitery”—a restaurant so small it becomes an aesthetic gesture, a critical component of the overall experience. In most cases, these petiteries offer seating for less than 30 people, and the kitchen comprises half of the leasable space. A conventional restaurant wouldn’t be able to get away with a single unisex toilet, but these places serve so few that the building codes allow for some concessions. Everything is tiny, and patrons voluntarily overlook the inconveniences for what feels like a selective experience. But it’s just as much economics as it is elitism. The proprietors of these restaurants, with notoriously narrow profit margins, must maneuver through a fiercely competitive scene in a place like Brooklyn. Rents are high. Innovation is essential. Small is, therefore, particularly conducive to keeping the biz going…better to contain that risk. But, in a restaurant that is smaller than most Americans’ living rooms, it’s also necessary to violate the laws of propriety to free up some floor space for another deuce (two-seater table). And thus we see the toilet ATM. 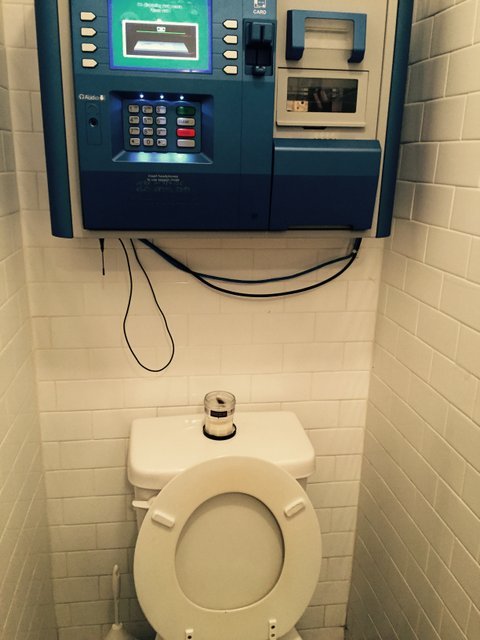 Perhaps the idea of an ATM mounted to a wall isn’t novel to some of my readers. It was to me. And the fact that the sign on the bathroom door tries to reassure the reader only suggests that, at this point, a restroom ATM is still a novelty in New York. How much longer it will be this way remains to be seen, but I wouldn’t be surprised at all if, within a year, other Brooklyn petiteries catch on to the concept. And, since petiteries are sprouting up all over the country, it’s a matter of time before a hip little bistro in Kansas City does the same thing…even if the lower rents and safer business model don’t justify it.

I’m probably reaching a little bit here, but in its own humble way, the bathroom ATM demonstrates how the “necessity is the mother of invention” aphorism can play out on a broader scale, favoring high density, high-expense cities where the population has no choice but to seek unorthodox means to rub two coins together—not just because of the hyper-competitiveness or high cost of living, but because the very supply of maneuverable space is that much more limited. Simply doing stuff—anything really—comes at a premium. Of course, one might argue that limited space is a direct consequence of the competitive and expensive environment, but such an assertion treads unapologetically into chicken-and-egg arguments, echoing the most debated and debatable fundamentals behind supply and demand. I’d be very surprised if another high-density, classically creative city like Tokyo (or many other jam-packed places in Asia) hadn’t already conceived of the wall-mounted ATM and the money machine in the men’s room as well.

Regardless of the broader implications, this little resto has to build up its market, which isn’t always easy. This one in particular does not accept credit cards, which should come as no surprise, because processing agreements with Visa, MasterCard or (particularly) Discover can cost a pretty penny for a small business. If the restaurateur was shrewd, he or she determined the cost incurred for establishing contracts with processing companies like Payline Data versus the cost of installing and maintaining an ATM.  And the ATM won, particularly since, in this day and age, it doesn’t have to take up any floor space.

Bearing in mind that this oddity (deftly captured in photos by Andrew Mayronne) will soon spread all across the nation, what will the Brooklynites conceive of next? A high-end gastropub with only a children’s menu)? Table service for our pets? A place that serves food so bad that you have to try it? Or something edgier—like cuisine for cannibals? With creative minds overseeing a paltry space, anything’s possible…as long as they cram that ATM above the crapper.

PrevHustling all the antiques under one roof.
Some cultures go full bloom; others are happy to remain bulbs.  Next