Goulash in the melting pot.

On the corner of an otherwise nondescript strip mall just outside of New Brunswick, New Jersey, I encountered this storefront: 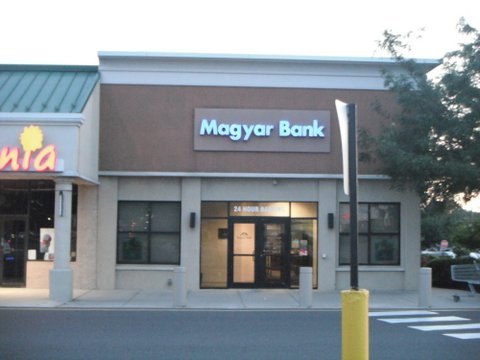 Nothing particularly special about it in the grand scheme of things—nothing that jumps out, just from viewing the exterior.

But the name is distinctive. Magyar. For those not in the know, Magyarország is the word for Hungary…in Hungarian. The word we know to describe this formerly large territory comes from the Roman Catholic Latin word used in the Middle Ages, Hungaria, which is no doubt easier for most Anglophones to say. But “Magyar” is the Hungarian word for the Hungarian language, as well as the demonym Hungarians would use: from their linguistically isolated position in Central Europe (neither Germanic nor Slavic), they refer to themselves as Magyars.

Magyar Bank may be a pretty standard operation in almost every sense of the word, but its name distinguishes it, particularly in this day and age, when banks have grown increasingly untethered from locations. In the past, it wasn’t uncommon for even the larger banks to assert their origins through their names: up until the wave of banking consolidations at the end of the 20th century, a National Bank of Detroit or First Chicago Bank would naturally cover much broader regions than their representative metros. But you often knew where the banks began. (Consolidations forced both of the aforementioned banks into the geographically non-specific Chase Bank, which is all over the country, and most people wouldn’t begin to know where it got started.) Here in New Brunswick, “Magyar” is a stand-in for another country, in that country’s language. Is it a Hungarian financial institution? A quick look at Magyar Bank’s website indicates that it clearly is an American enterprise. But the name is a tacit shibboleth. Since most Americans who aren’t auditioning for Jeopardy are unlikely to recognize the word “Magyar”, this bank clearly intends to attract those who are in the know—who can make the connection that Magyar is about Hungarians.

But why would a bank in an older suburban area choose such a cryptic and inaccessible name? The answer should be obvious to anyone who has followed this blog for any time: New Brunswick has long claimed an uncharacteristically high concentration of persons of Hungarian ancestry. Around the time of Magyar Bank’s founding in the 1920s, nearly one-third of the city’s population consisted of Hungarian immigrants.  The neighborhoods immediately east of downtown have historically hosted the highest concentration of Hungarians. While the Magyar Bank from the photo above is a bit further south (and outside the city limits), another branch of the Bank stands right at the terminus of Somerset Avenue, historically the Hungarian spine—and still the site of an annual festival. All in all, Magyar Bank has six locations in central and northern New Jersey.

The European immigrants of the early 20th century have assimilated and their cultural thumbprint has lost much of its definition, due in part to a population that is no longer as centralized as it once was, but also because newer waves of immigrants have taken their place. This phenomenon is true all across the country, but it may be particularly pronounced in the Garden State, whose proximity to the nation’s biggest city has caused it to receive foreign newcomers in much higher volumes that most of the country. These days, the most prominent ethnic neighborhoods in New Brunswick are Hispanophone, often of Puerto Rican or Dominican descent, and comprising nearly half of the city’s population.

New Jersey in general and New Brunswick in particular remain prominent hubs for Hungarian culture; institutions ranging from churches to schools to social clubs continue to operate, even if their members have to travel greater distances to get there. Cultural diffusion is not synonymous with extinction; all it means is that the cues become harder to spot. Like the ever-modest Magyar Bank. And at the same intersection of Milltown Road and Georges Road, other clues emerge, like this one catty-corner from the bank: 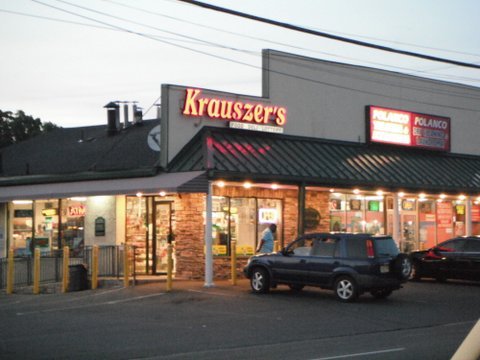 I can only type the surname “Krauszer” and “Hungary” into various search engines to see if there is any sort of intersection on the information superhighway, and there is. Without the letter Z, it would be easy to surmise that Krauser is a German name, but the SZ combination is not German at all, yet it does appear in many Hungarian words (like Magyarország for example). Could this be another business run by a Hungarian American?

Elsewhere, in the same Brunswick Shopping Center that hosts our Magyar Bank, another business offers an even greater ethnographic guessing game. 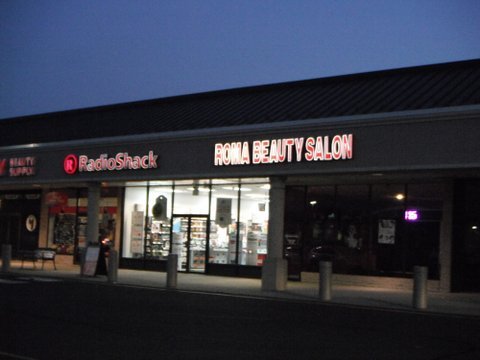 So it’s just a beauty salon. But it’s called “Roma”. And the word Roma typically refers to the Romani people—better known by the pejorative “Gypsies”. Though broadly associated with itinerancy, they have historically concentrated heavily in central Europe, in such nations as Romania, Bulgaria, and Hungary. Could it also be a Hungarian-owned establishment? Sure, it’s a stretch. But it takes working off a hunch to even formulate these conclusions. Like the Dutch community of DeMotte Indiana, which I blogged about a few years ago, the enclaves of less common European ethnicities don’t assert themselves as powerfully as they might have a century ago. But they’re still there, sometimes in the least expected places, so it can offer a bit of a jolt when you find them, like biting into a peppercorn buried in the thick assimilation stew. Or a heavy dose of paprika. Let the culture define the analogy.

PrevFrom the highest rooftops, a call to gimme shelter.
Dethroning the top brass.Next

5 thoughts on “Goulash in the melting pot.”