Another hint that a business is toast.

All of us are guilty from time to time with finding a brand and latching onto it. It fosters exactly the sort of customer loyalty that the producers want. My own brand fascination has less to do with the product—I was hardly hooked on it—but more in how it could have gotten so big and then crashed so hard. 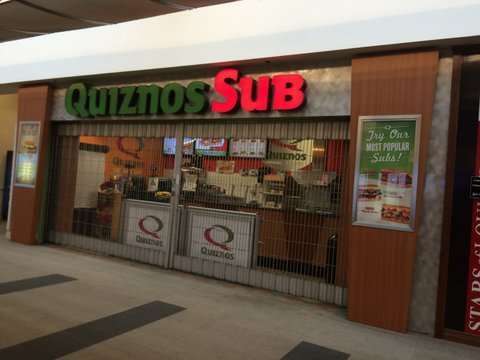 Yes, it’s a blog post on Quiznos…again. My first entry looked at an ancient but well-preserved logo for the fast food chain in Detroit; the second investigated how another restaurant in Danbury, Connecticut had co-opted the Q-shaped neon sign, probably purchased for dirt cheap after one of the many franchises closed down. It’s obvious that the chain has left its thumbprint across a variety of locations, but, until now, none of my references to Quiznos have featured branches that were operational. Until this one—or is it?

The formerly mighty purveyor of toasted sandwiches is but a wraith, nearly absent from many metropolitan areas. At its peak in around 2006, Quiznos boasted over 5,000 locations across the county, mostly through franchises. But rising acrimony between the corporate office and franchise owners—who often claimed that corporate-mandated vendors charged far higher prices for capital than necessary—resulted in a slew of class-action lawsuits. Ultimately, the franchisees collectively felt the parent corporation itself was the biggest obstacle to profitability. Though hit particularly hard by the Great Recession, Quiznos began hemorrhaging franchises as early as 2007. Today, approximately 2,100 locations remain—a nearly 60% drop. Though still commonplace on the west coast and heavily concentrated around Denver (where the chain began), they’re in very short supply east of the Mississippi.

Which makes the one above—at Louisville International Airport (SDF)—such a surprise. A casual search for Quiznos on their website suggests that only six remain in metro Louisville. But it’s unclear whether even this one in the photo above is a fully functioning restaurant. From the looks of things, it could open any minute: all the placards are out, the lights are on, and—perhaps most importantly—the bright yellow bananas in the basket near the register look ripe. So someone was probably there within the previous 24 hours. But why isn’t it open? This picture comes from early evening on Memorial Day—apparently not a busy time at this airport that many people still fondly call Standiford Field, even though the name officially changed 20 years ago. The crowds weren’t exactly thick, though my suspicion is that, like many third-tier airports in the middle of the country, Louisville International isn’t really ever all that busy. Regardless, 7pm would typically within the time for snagging people looking for a bite to eat. After all, the restaurant adjacent to Quiznos appeared to be open. 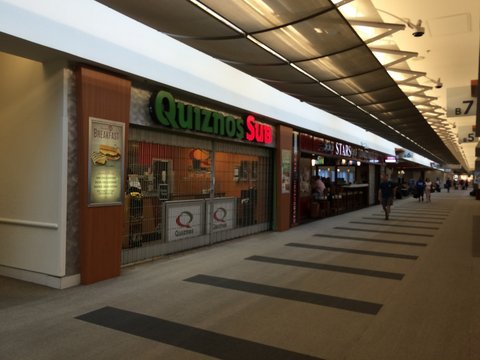 I called the number listed on the Quiznos website for this particular location, and a completely unrelated answering machine message picks up: a certain “family joint venture”, but no mention of a restaurant. Calling the other Quiznos locations in metro Louisville doesn’t help; they don’t seem to know what’s going on at the airport either. These telltale hints beg the question: did I catch this location in its final throes, right before it headed in the same direction as nearly 4,000 other Quiznos operations?

If this is the case, it does not augur well for the company, which recently welcomed its third CEO in about five years. After all, this is an airport we’re talking about, and if a eat-and-go franchise can’t make it here, where can it succeed? Airports have a captive client base, which in turn compels the vendors to jimmy up their prices. Americans broadly perceive airports as a place where they get ripped off, yet many still find it necessary to eat something during a layover or a long flight. While the TSA won’t confiscate food brought in from outside, it’s still not always a savory proposition, so many travelers still resort to the eateries.

Then again, maybe airport eateries aren’t such a surefire bet. The wave of consolidations in the airline industry, coupled with a marked decline in airport traffic, has resulted in a number of visibly oversized airports, from the formerly mighty Cleveland-Hopkins International (CLE) to the much smaller Woodrum Field in Roanoke (ROA). In many cases, gate after gate—and sometimes even an entire terminal—sit completely empty. Meanwhile, Indianapolis International (IND) had to compromise on its original commitment to public art by saturating its walls with ad space.   SDF, with fewer enplanements than IND, can’t even find buyers for all its promotional walls. Time will only tell if airports experience the same retail decline as American malls. If, in a few years, mid-tier cities like IND and CLE and SDF, offer more than a few mom-and-pop hot dog stands, we’ll truly know that the aviation industry is in trouble.

Perhaps the airport just wasn’t the right fit for Quiznos. Or maybe, despite all the indicators, this branch is actually still open. Regardless of what’s happened here in Louisville, it clearly isn’t the right milieu for this chain, which, following a Chapter 11 bankruptcy filing, is clearly still trying to find its footing. I personally hold greater hope for Freshens Yogurt, Hudson News, or all the other stereotypically (and sometimes exclusively) airport retailers than I do for the formerly mighty sandwich chain with the memorable name. But maybe what they’ve got baking in their ovens will surprise all of us.

One thought on “Another hint that a business is toast.”