When a highly localized slang term pops up in an environment far removed from its natural home, it’s inevitable that it will cause some heads to turn. And that’s exactly what happened when I passed this sign along a fairly busy stretch of highway: 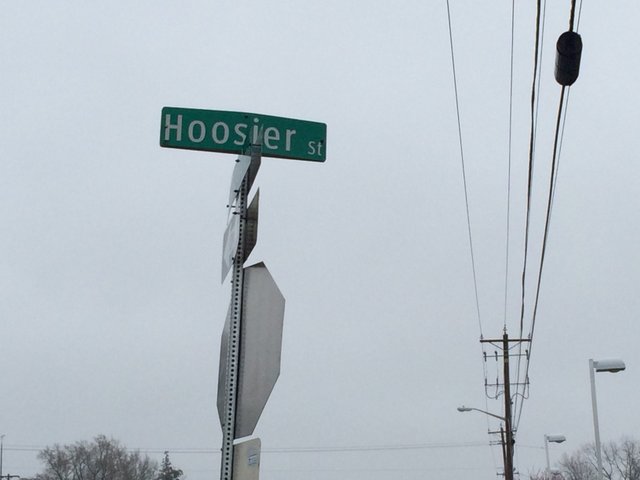 People who follow college basketball—and particularly those who followed it in the 1970s and 80s—already know that a “Hoosier” is the brand/mascot for Indiana University. But the fact that it’s the broader, most common reference to people from Indiana in general is almost as well-known. Kentucky has “Kentuckian”; Ohio has “Ohioan”; Michigan has the droll “Michigander”. But the demonym for Indiana is a completely different word.

Most people get it. But every now and then, a bastardization of this affectionate (but ever so slightly affected) term creeps in. Most recently, Indiana foisted itself into the public spotlight through the high-profile passage—and almost immediate amendment—of its own Religious Freedom Restoration Act (RFRA), a statute that immediately generated remarkable controversy both outside and within. National media swooped into the Hoosier State, covering protests and boycotts from major corporations, and, within a matter of a few days, embattled governor Mike Pence worked with the legislature to weaken the impact of the law by including stronger protections for certain groups that specifically perceived themselves as subject to discrimination under RFRA. But for about ten days, it seemed like all eyes were on a state that generally shunned the public limelight.

I’m obviously pussyfooting around the politics of RFRA, very deliberately. It has no bearing on this blog article. What matters is that, when this triumphantly quiet, nondescript state suddenly took center stage, it was fascinating to see how many ignorant media outlets used the term “Indianan” instead of Hoosier. As a Hoosier born and bred, I could have been incensed—except that making a big fuss of things is just not characteristically Hoosier. (And all the more surprising that Hoosiers/Indianans immediately raised such a ruckus after the passage of RFRA. Hoosiers in general certainly don’t usually muster such enthusiasm even on Election Day.)

The frequent appearance of the word “Indianan” during the RFRA controversy reminded me that this was the term my textbook used in the fourth grade—the year in which the State mandated Indiana history as part of the curriculum, but evidently didn’t bother to scrutinize the best-known shibboleth. But beyond that, “Indianan” is not a term you see much anywhere. People from Indiana are Hoosiers, regardless of whether or not they attended Indiana University—a potential source of chagrin for graduates of rival Purdue University, whose mascot is the equally idiosyncratic “boilermaker”.

But what does “Hoosier” mean? According to the Indiana Historical Bureau, it started appearing in print in the 1830s—less than 20 years after statehood, though at that point the authors often spelled it “Hoosher”. It might derive from the Cumbrian “hoozer”, referring to “high” or “hills” (particularly plausible since the earliest settlers of Indiana territory began in the hillier southern part of the state). The name could just as easily come from a corruption of the pioneer greeting “who’s yere?”, or, according to state poet laureate James Whitcomb Riley, the violent tendencies of early settlers resulted in them yelling “whose ear?” when cleaning up after a particularly bad melee. Some have even postulated that the term comes from the heavily influential African American Methodist preacher Harry Hosier, even though he died before Indiana was a state, and no evidence can corroborate that he ever preached along the northern shores of the Ohio River, where Indiana’s first pioneers built their settlements. Still, his oratories were legendary across what was the frontier at that time, and his ethos—abolition-minded, populist Methodism—most likely resonated among the largely uneducated original settlers of the Ohio Valley. But none of these stories explain why the name stuck with Indiana and not Ohio, Illinois or Kentucky.   Meanwhile, in the non-adjacent state of Missouri, the term “Hoosier” has long been an epithet akin to “white trash”, particularly in the St. Louis area, though it no longer has anything to do with residents of Indiana. The fact remains that no one can pin down the origin, which undoubtedly lends it some mystique, as well as some of its endurability. If we could clearly identify what a Hoosier is, we would have solved the puzzle, and this strange sobriquet would likely fade into obscurity. But it hasn’t. In fact, no other state has a more powerfully distinctive demonym.

Which makes it all that much stranger to see it used as a road name completely outside of its habitat. What is the name of the other street intersecting Hoosier Street from the photo above? 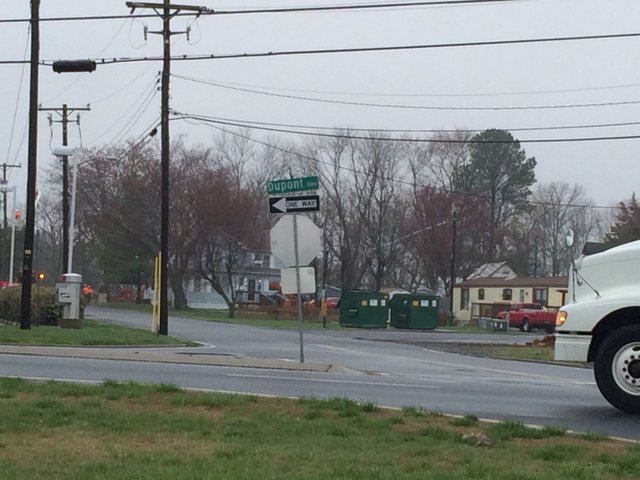 Dupont Boulevard. That’s right; it’s the family name for what remains one of the largest chemical companies in the world. The Delaware Dynasty. This Hoosier Street is not even in Indiana. It’s in Delaware.

Why would The First State appropriate something so associated with The Hoosier State? And then to intersect it with a last name as famous as du Pont?  It is hard to think of any last name that comes closer to defining a state than “du Pont” (DuPont), partly because the state itself is so small, but also because the company is so large and enduring. Wilmington, in the north of the state, conveniently positioned between Baltimore and Philadelphia, grew along with the fortunes of the E. I. du Pont de Nemours and Company. And its rapid ascension during the mid-19th century largely explains why northern Delaware is so widely industrialized, and why Wilmington is such an important stop along the Northeast corridor.

But this Hoosier/Dupont street intersection is not in northern Delaware. It’s far to the south, in Lower (slower) Delaware, the overwhelmingly rural region that, through its precipitous growth, has recently shifted Delaware’s population center further from its Wilmington roots. The Delmarva Peninsula consists of the portions of DELaware, MARyland and VA (Virginia) that sit between the Chesapeake Bay and the Bay of Delaware/Atlantic Ocean. This peninsula comprises the vast majority of Delaware’s 2,000 square miles (but, until the last 50 years, only a fraction of the state’s population), generally remained untouched by the Industrial Revolution. Even though Lower Delaware’s cheap real estate and lively beaches have resulted in a surge of Yankee transplants, to this day its cultural indicators remain overwhelmingly southern, not entirely unlike the influences that first emerged in southern Indiana’s Hoosierland, which shares lower Delaware’s latitude, if not its pancake-flat topography.

For me to speculate anything further about the reason for a Hoosier Street in Delaware would be about as reasonable as taking a stab at the meaning of this goofy little word. To the east it leads to the small town of Selbyville, Delaware, and to the west it veers in a southerly direction—right across to the Maryland border. It’s just a road, and this is just the sign for the road. Quiet, downplayed, and matter-of-fact. To generalize further, it’s the same mentality that characterizes this modestly influential state, which is growing faster in population than any other state in what one could broadly define as the Northeast. Like Hoosiers, Delawareans don’t make a fuss of things, and here’s proof. Just a few basketball courts south of Hoosier Street’s intersection with Dupont Boulevard is the flashy sign announcing the Maryland border. 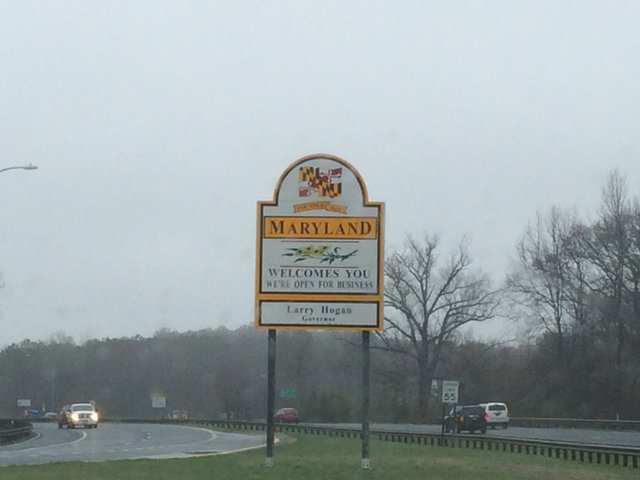 It features Maryland’s heraldic flag, a major point of pride in the state, which I’ve blogged about before.  Meanwhile, turn the other direction, and how does Delaware announce itself? 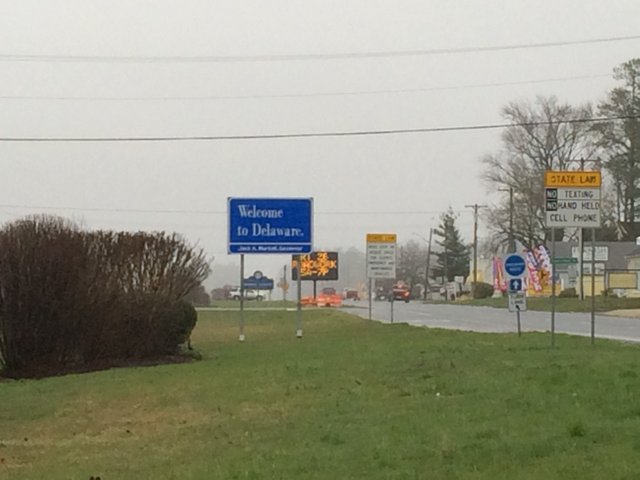 PrevHistorical memory as a branding strategy.
Meter meditations made material.Next