Historical memory as a branding strategy.

For my first blog post in America’s largest city, I introduce a topic that is incredibly small: really nothing more than a label. But it also fits perfectly within its milieu. Strolling down an almost exclusively residential block in the Chelsea neighborhood recently, I came across an apartment building with a huge promotional flag, featuring the building’s crest, I suppose. 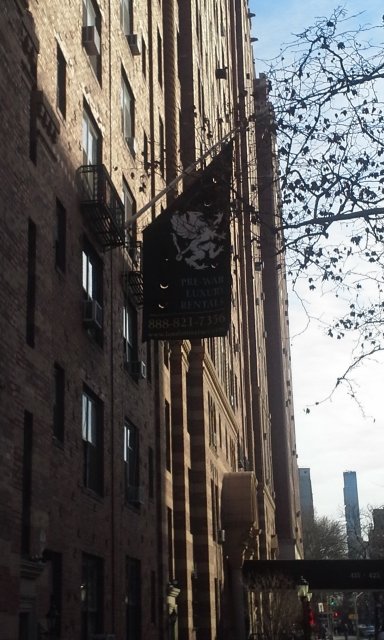 But on the other side, it featured a subtle, distinctive marketing strategy. 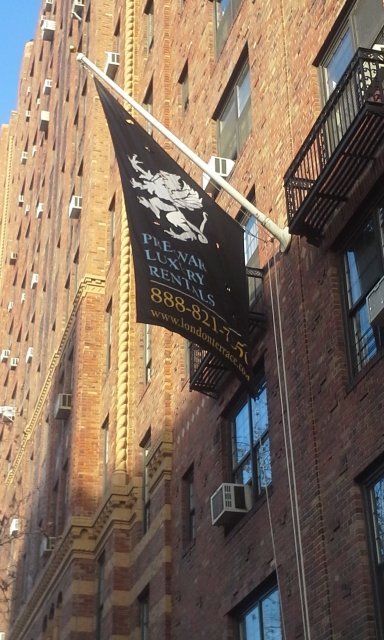 Though it’s not easy to read, the blue lettering says “PREWAR LUXURY RENTALS.”

What’s the key word here? Obviously not “luxury”—that’s almost as common of a marketing catchphrase as “new”. “Rentals” is just stating the tenure agreement, obviously indicating that it is not available to buy, nor is it a cooperative, nor is it one of the other possible arrangements to establish tenure in housing.

“Prewar.” It’s a word I have never seen used so proudly, exclusively to advertise housing. On a banner, no less. No doubt it’s a response to the perceived demographic, and perhaps my unfamiliarity with the term as a marketing catchphrase has more to say about the fact that I haven’t spent enough time in New York City. Evidently Rose Properties, the managers/owners of London Terrace Gardens, think that it’s a major selling point.

It’s safe to assume that the “war” this word is referring to is World War II, which has become a tacit, metaphoric bookend, capturing a cataclysm in preferred housing designs, in the configuration of neighborhoods, in how to navigate our environments—in an entire way of life. Prior to this war, car ownership was quite common (as it had been for twenty-five years) but had not yet approached the level where it was a sine qua non. Prior to the war, homeownership was completely out of reach for well over fifty percent of households, including many who would have never identified themselves as poor or even moderate income. And prior to this war, US population growth fumbled, suffering a single-digit percentage growth in the 1930s, after recording double-digit growth from every preceding decennial census. (The Great Depression that immediately preceded and dovetailed World War II is the other skeleton in the closet. It’s influences on the birth rate and migration patterns are still unimaginable by contemporary standards, even in the wake of the Great Recession from which we are finally re-emerging.) Only after the September 1945 victory did the country shake off its doldrums, with young soldiers coming home to start families in such great volume that it spawned the Baby Boom Generation—the largest generation ever, and the first to grow up completely post-war.

All the observations about World War II in the previous paragraph are gross generalizations. Yet it is these same generalizations that determine whether “prewar” connotes something positive or negative to the consumer. Concomitant with the Baby Boom, with the surge in homeownership among the lower middle class, with the profound dependence on the automobile—on top of it all came a pointed rejection of the old way of life, manifested by higher density settlements, getting to destinations by foot or public transportation, apartments as a desirable housing type for young families—in short, everything broadly associated with urban living up to that point. Americans rejected it for the suburban life. And London Terrace Gardens, the West Chelsea neighborhood, or even all of Manhattan embodied what the postwar generation repudiated. A streetscape such as the one below (viewed from the High Line) with this same goliath apartment building on the left—the largest apartment building in the world, at the time of its construction in 1930—had begun to lose its cachet by the 1960s. 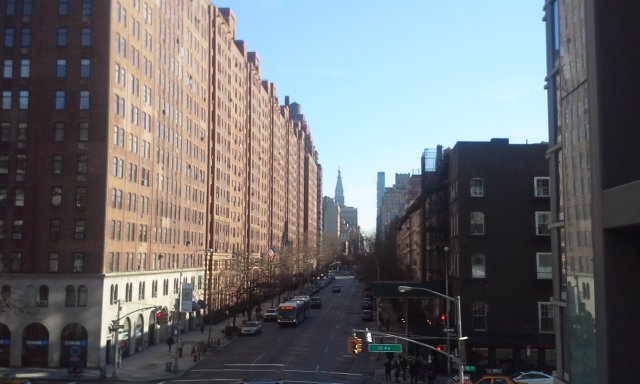 Even Chelsea—historically a mishmash of working class immigrants (often Irish) in the tenement, with a more established, moderate gentry in the nearby brownstones or apartments—became a crime and drug haven during New York City’s nadir in the 1970s. The postwar mentality culminated in a systematic abandonment of all things prewar, and America’s largest city began to lose population while its postwar suburbs burgeoned.

A half a century later, and, at least in Manhattan, “prewar” has become hip again. The generations that grew up in these suburbs, often the children of Baby Boomers, have specifically sought buildings like London Terrace Gardens because of the prewar features: high density units, older finishings, an immediately walkable environment, and the irrelevance of car ownership are all plusses in their books. As recently as 1990, it would have been unthinkable to use the word “prewar” as a real estate marketing strategy. If anything, the owners of prewar properties were doing everything they could to gussy up their interiors so that they could compete with the stuff built during the Nixon administration. Now, many of those postwar booming suburbs, including certain neighborhoods in outer Queens or parts of lower Westchester County, are the ones struggling to compete with Chelsea or Hell’s Kitchen.

Truth be told, my suspicion is that most of the American property management industry would still shy away from using the word “prewar”, not because its connotation is negative so much as neutral. Most people seeking housing don’t view things in terms of a certain epoch that spawned the urban/suburban divide. They seek certain amenities that remain largely unassociated with a time period. And while the age of housing often correlates to its likelihood of having walk-in closets, a garbage disposal, an attached garage, hardwood floors, or washer/dryer hookups, even that association is weakening over time, as interior upgrades allow prewar housing to benefit from postwar selling points. Frankly, “prewar” is largely meaningless because, for most people, the shift that it spawned went unnoticed—simply no big deal, just a product of the changing times.

Therefore, “prewar” is a word real estate brokers might use to attract “those in the know”, and its cogency outside of select urban environments is limited. It might be the tiny, descriptor text in the weekly listings, but only in a few places like Manhattan can we expect to see it displayed triumphantly on a flag. After all, in the US, just a handful of cities have enjoyed a sustained downtown living: Chicago comes to mind, Boston, Philadelphia and San Francisco. For the others, its almost a foregone conclusion that most housing in urban settings is “postwar”, and the remaining prewar housing must first capitalize on being “newly renovated” if it’s to remain viable. Therein lies the distinction between New York City and most of the rest of metropolitan America. And even in Manhattan, the property managers could be taking a risk by using the term “prewar”. After all, through redevelopment, infill and adaptive reuse, neighborhoods like Chelsea have plenty of postwar options that feature the same high density, walkability and mixture of uses. At any rate, Rose Properties sees this building’s oldness as a selling point. And the fact that London Terrace Gardens makes no reference to its last remodeling shows what distinguishes Manhattan from the more prevalent American ethos: gravitating toward things that are new. “New.” The number one word in advertising. You can’t escape it, but at least in Manhattan, you just might be able to avoid it.

8 thoughts on “Historical memory as a branding strategy.”