Social deviation: when tables and maps say more than our eyes.

My previous article, on the Hasidic Village of Kiryas Joel, illustrated perfectly how demographic differences can play out spatially. Kiryas Joel is an uncharacteristically high-density settlement filled with individuals who share an orthodoxy, whose high birth rate and dependence on federal aid often incurs the anger of the upper-middle class suburbs that surround it, known as the Town of Monroe. However, no overt physical barriers separate the two sociological extremes: plenty of roads connect the Hasidic enclave (Kiryas Joel) to conventional, leafy, bourgeois suburbia (Monroe). And Kiryas Joel cannot help but engage with its neighbors to some extent: village continues to grow at its outer boundaries, and its constituents participate ardently in local politics.

The Town of Monroe, meanwhile, despite exhibiting all the characteristics of a middle or even an upper-middle class community that came of its own in the 1960s, has a poverty rate well over 20%. Such a level that may be relatively common in central Appalachia, the Great Plains, or the Deep South, but is virtually unheard of in the outer suburbs of New York City. Kiryas Joel, often referred to is the “poorest place in America” (at least among municipalities over 10,000 people) is probably the sole explanation for why the Town of Monroe has high poverty; if it weren’t for Kiryas Joel’s influential location, Monroe’s poverty would probably be negligible. It would share the income levels of all the other neighboring communities in exurban Orange County. But because of Kiryas Joel, Monroe appears quite poor after crunching the numbers.

Still, it’s unlikely that most residents of Monroe think of themselves as living in a poor community. Despite the proximity, the cultural gulf between Monroe and Kiryas Joel is so great that they essentially operate as separate worlds, engaging only during the bitterly fractious election season. Day-to-day communication doesn’t seem to happen much. Even motorists passing from one side of Monroe to the other will circumscribe Kiryas Joel, if needs be. The day I was in Kiryas Joel—on the Saturday Sabbath, when car usage is forbidden—I only saw three cars pass through this municipality of over 20,000 people over the course of two hours. And I only saw one discernible Gentile walking along Kiryas Joel’s streets. There might as well be a wall that surrounds it.

The wall that separates Clinton, New Jersey and its surrounding communities from its adjacent demographic outlier is a bit more literal. 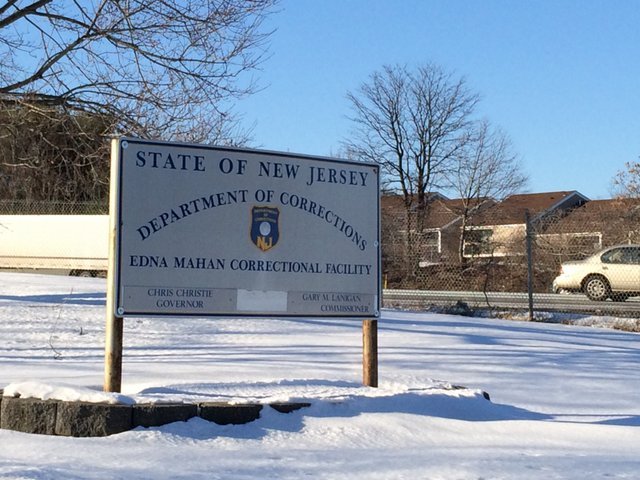 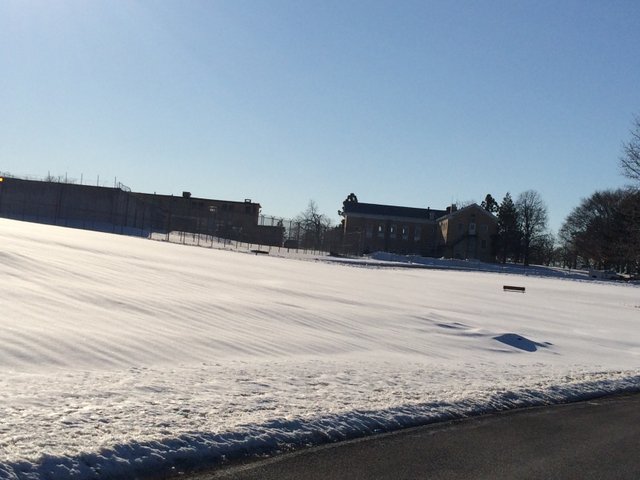 The Edna Mahan Correctional Facility for women occupies several hundred acres sprawled across the rolling hills, just south of Interstate 78 and only about a mile or so southeast of Clinton, a far outlying bedroom suburb of New York City with a picture-perfect, two-block main street. The purple ring in the map below—the site of the Edna Mahan campus—shows the proximity of the women’s prison to Clinton’s boundaries. 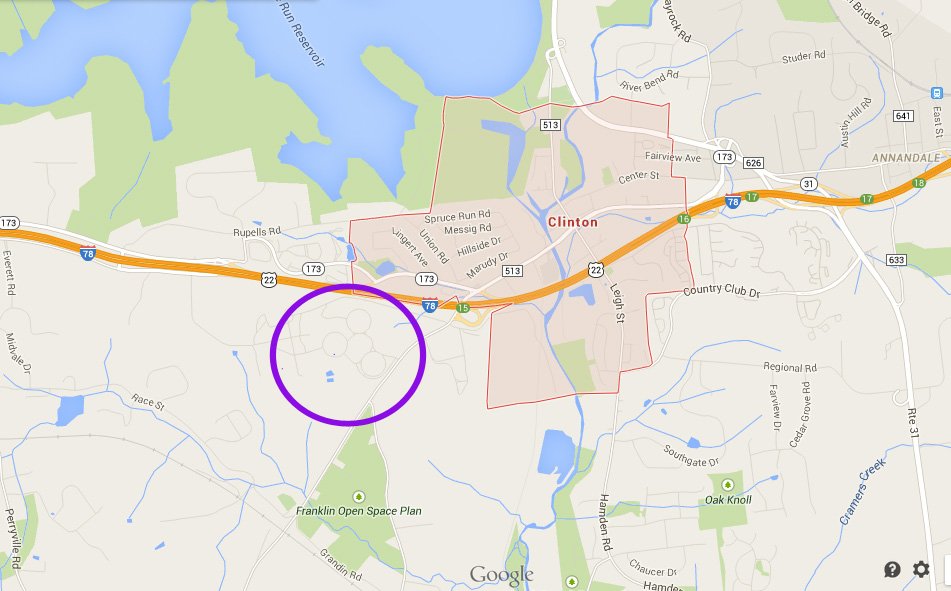 Not far at all. And, more or less on the same campus, is the Hunterdon Developmental Center, one of five remaining facilities in the state that offer shelter and intensive for individuals with severe developmental disabilities or mental health needs. 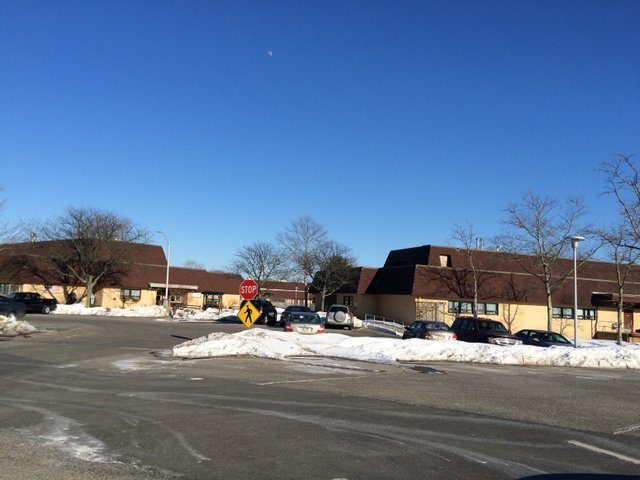 If it weren’t for the fact that several of the prison’s aging structures are visible in the distance when driving along I-78, it would hard to surmise that a major penitentiary is in the area. And the developmental center is too low-slung to stand out from any visual angle. Both facilities keep a low profile. The signage announcing Edna Mahan near the Clinton exit along I-78 is nondescript. And the physical distance between these structures and any other major arterial ensures that it will stay that way. The road separating them from the interstate exit is about a mile long. 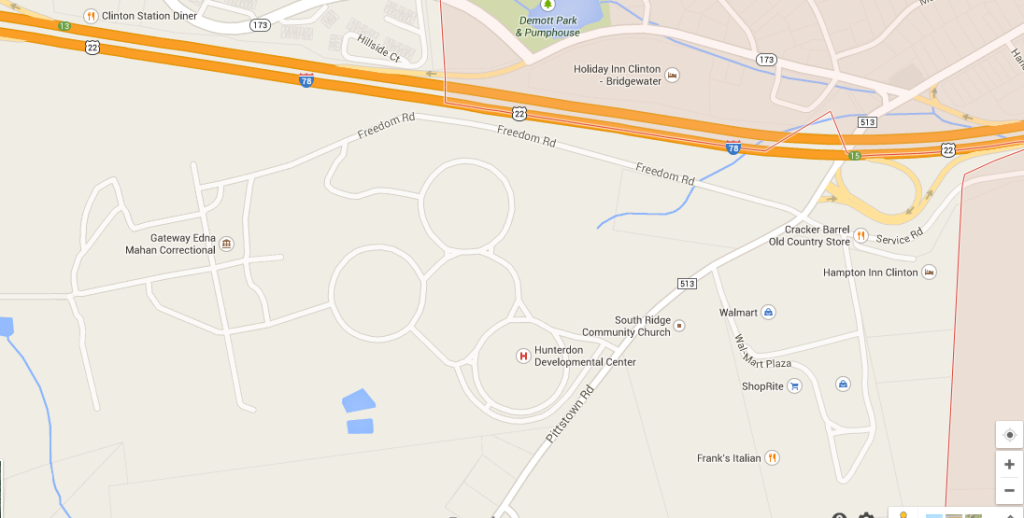 And no, the irony that the only way to access the prison is along “Freedom Road” didn’t escape me.

I didn’t get too many photos of the Edna Mahan prison. It doesn’t take any intuition to know better than to encircle a prison entrance, while snapping pics every 50 feet. But pictures don’t help that much anyway. The maps and the stats tell the real story here. Here’s another map that shows more precisely the location of the two facilities in relation to the municipality that contains them. 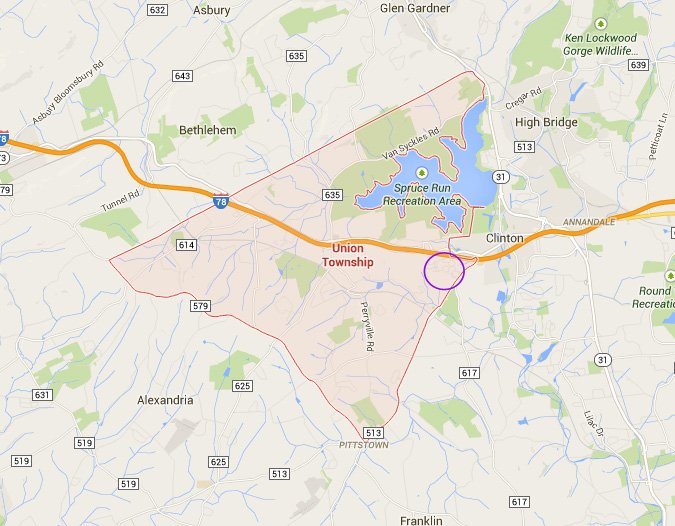 The purple ring reveals that they sit at the eastern edge of Union Township, Hunterdon County, New Jersey. Thus, Union Township must consider the inmates at Edna Mahan and the clients at the Hunterdon Developmental Center as part of its constituency. Obviously. They live within the township’s boundaries.

And the demographics on Union Township confirm this. The 2010 Census Profile of General Population and Housing Characteristics (DP-1) reveals the municipality’s most pointed idiosyncrasies. The first most notable characteristic is the breakdown under “SEX AND AGE”, where females comprise 56.3% of the population: an unusually high number, since the breakdown is typically closer to 49% male and 51% female. Meanwhile, the 2006-2010 American Community Survey (ACS)–which organizes Census data over a broader array of socioeconomic topics (such as poverty, commuting patterns, and income) than the short-form US Census survey (DP-1) that reaches all households—shows that 0% of families in the Township have incomes below the poverty level, yet 12.5% of “all people” are below poverty. How does this work, especially considering that the median family income in Union Township is a remarkably high $158,283?

The lynchpin is an often-neglected variable featured on the first of these two charts: the 2010 General Population and Housing (DP-1) results show a category called “Total Population In Group Quarters”. This can include students living in dormitories, members of a religious order, or residents in an assisted-living facility. But those would be “noninstitutionalized population”. In Union Township, 23.7% of the population is “institutionalized”, undoubtedly accounting for the inmates at Edna Mahan and the clients at the Hunterdon Developmental Center. This distinction is critical because a only the “institutionalized population” is under continuous supervision; these noninstitutionalized persons in group quarters (e.g., dorm residents) would be free to come and go as they please. Thus, nearly a quarter of Union Township’s population cannot enjoy the amenities of Clinton’s downtown, or much of anything else, for that matter…and this contingent, which presumably has no income, accounts for the 12.5% individual poverty level, even while Union Township’s families (none of which are institutionalized) are generally quite wealthy. Also noteworthy is the fact that only 10 of the people living in group quarters in Union Township are noninstitutionalized, so the group quarters population overwhelmingly consists of people without full participatory capacity. Factoring in the group quarters population can expose a real canard when cities tout the vibrancy of their downtowns. Some American cities claim to have a huge population of downtown residents…but a closer look at the numbers reveals that many of those “residents” are actually prisoners at the city or county jail (which are nearly always in a city’s center). And inmates aren’t exactly enjoying the amenities of a hip and lively downtown, are they?

Union Township many not have a downtown to brag about—though Clinton is nearby—but it certainly wants outsiders to know it offers a high quality of life…which it probably still does, even if the unusually high poverty numbers are inauspicious. Like the Town of Monroe in New York, Union Township in New Jersey’s Hunterdon County carries with it a guise of suburban comfort, even while a statistically significant outlier lurks outside of general public view. And yes, the grounds of Edna Mahan and the Developmental Center reveal some evident infrastructure of institutionalization. In between the two large facilities is a park-like area, completely surrounded by fences. 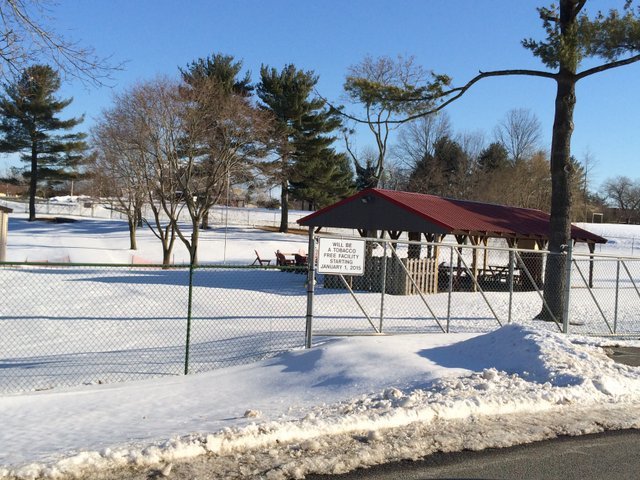 Since the chain-link fence above still seems relatively benign (no barbed or concertina wire), it’s safe to assume this space is available for the residents of the developmental center rather than the prison. Not surprisingly, the prison’s fortification is taller. And barbed. 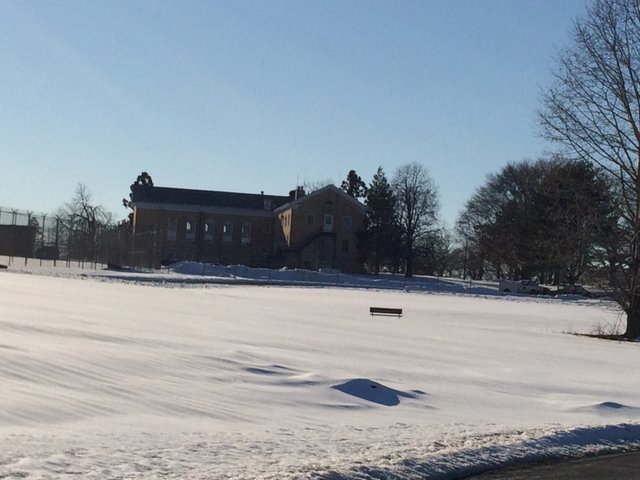 Some of it is visible in the far left of the photo above.

New Jersey, like most states, prohibits felons from voting while in prison.  And I suspect that the mental or physical incapacitation of most residents in the Developmental Center prevents them from voting; such is the nature that these state facilities (a rarity in this day and age) tend only to harbor individuals with the severest impairments. (These developmental centers are, in fact, a rarity in this day and age; only a few states still fund them, and Governor Christie recently closed two in New Jersey.) So, unlike the interplay between the Town of Monroe and Kiryas Joel, where the two factions routinely hash out their differences at the voting booth, residents in Union Township and Clinton hear virtually nothing about the large facilities tucked off the road. Sequestered from the surrounding affluence, the Edna Mahan Correctional Center and the Hunterdon Developmental Center are almost invisible. Until someone investigates those demographics. And as is usually the case, the numbers don’t lie.

2 thoughts on “Social deviation: when tables and maps say more than our eyes.”