Because public art can tow the party line.

In many American cities, the most prominent murals emerge on the blank sidewalls of old buildings, often through months (if not years) of well-calibrated civic collaboration. Philadelphia, the national—and perhaps the global—leader in this art form has its own long-established Mural Arts Program, a well-staffed organization that not only vets the content and creators of the murals to maintain high standards for quality, but the Program also transforms the entire process into an act of community involvement and education. Indianapolis may not have an organization devoted exclusively to mural production, but the city’s Arts Council effectively used a key event—such as hosting the Super Bowl in 2012 —to galvanize a flurry of mural-producing, again vetted through a process that has largely successfully ensured that the mural sites are pragmatic and can effect a positive impact on their respective surroundings, rather than facing the wrecking ball just a few years later. Detroit has its own panoply of murals, scattered across its 138 square miles. Though at one point, a Detroit Mural Factory seemed to serve as a centralizing force for this urban artistry, the only surviving remnant that I can find are Tumblr and Facebook sites that no one has updated in over two years.

No matter. In 2013, I covered what I saw to be a particularly effective middle-ground strategy in Detroit for what appeared to be more of a “placeholder” mural: a prominent site on the side of a building, presiding over a vacant lot that Wayne State University had slated for future development. It turned out the artistic installation only appeared to be a mural. It was a large painting tightly mounted to the side of the building, which its creators could eventually remove, thus salvaging the “mural” when a developer finally breaks ground at the grass-filled corner, thereby blocking visibility of the sidewall.

But not all murals in Detroit metro seem so carefully wrought. The less “official” they look, the more like they are to straddle the boundary between a platform of individual expression and a potentially vandalizing graffito—which, inevitably, also is a platform of individual expression. Legality notwithstanding, the unsanctioned mural can offer just as much interest as a cultural component—and possibly more. After all, while the oeuvre of the Philadelphia Mural Arts Program is certainly polished, it is also in the organization’s interest to eschew the controversy that might cost it support from its numerous benefactors. 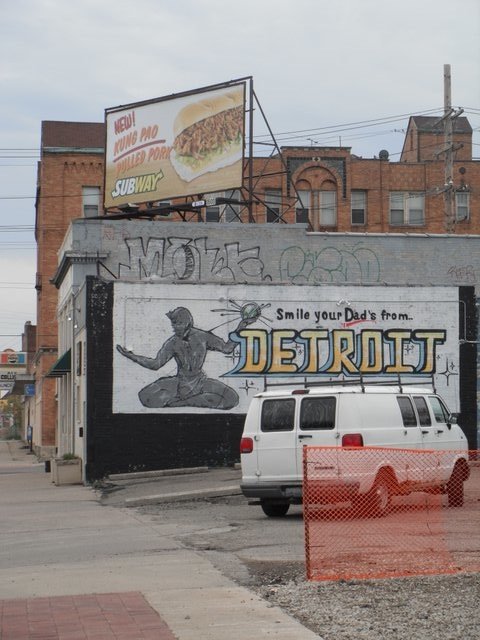 The mural on the building in the right side of the photo contains the city’s most prominent sculpture, the Spirit of Detroit; since its debut in 1958, it has ascended to probably the most widely reproduced icon of the city—its personification. Not really anything different in this mural, but the message to its right carries some extra weight. 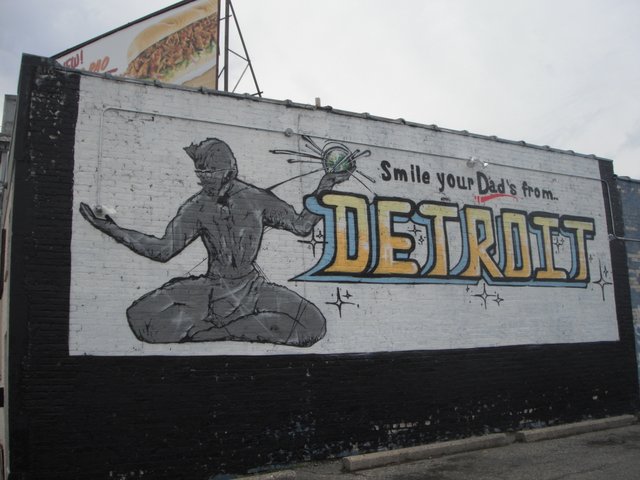 What does the “Smile your Dad’s from Detroit” mean exactly? It might be cryptic to a few, but it doesn’t take long to ponder what it’s getting at: considering that the Motor City has lost nearly 70% of its population since its peak around 1950, it’s increasingly likely that the average Detroiter really isn’t from the Detroit city limits, even though quite a few more from the previous generation—the dads—can claim Detroit roots.

But this mural assumes greater resonance when one considers its exact location. 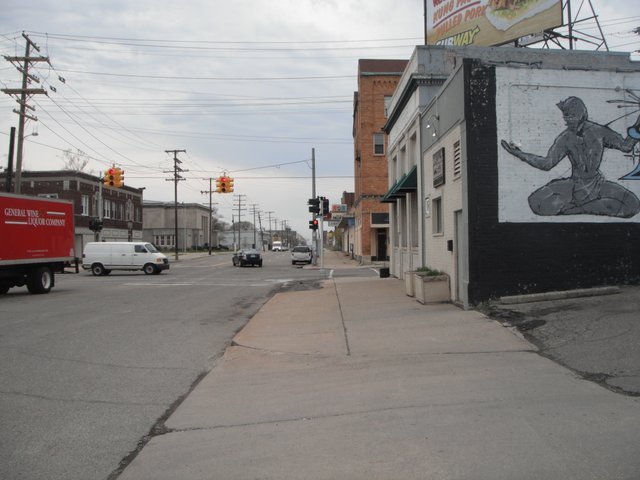 It sits right at the boundary between Detroit and the adjacent suburb of Grosse Pointe Park. While the building itself is on the Detroit side, it couldn’t be closer to the line; it’s very likely I was standing on it from the point that I took the above photo, on that space at Kercheval Avenue right between Alter Road and Wayburn Street. The map below shows the reality; the dashed red line is the municipal border; the blue star is where I was standing.

So fundamentally it serves as a “Welcome to Detroit” sign, but there are a lot more sociocultural forces that no doubt inspired it than just a greeting to passers by.

I’ve covered Detroit’s boundary with its suburbs in the past. A post from a little over a year ago even captured another prominent sign at the city line—that time it was a billboard for Target at the widely known thoroughfare of Eight Mile Road, familiarized to a national audience by numerous sociological studies, including one Hollywood-generated sociological study starring Eminem. Eight Mile Road is striking because of the income and racial extremes distinguishing Detroit on the south side from the affluent Oakland County suburbs to the north. But it’s an inordinately broad street in itself, so it’s hard to capture the chasm in a photograph, or even a series of photos.

As remarkable as Eight Mile Road might be, it pales in comparison to the divide at Alter Road, a modest two-lane street on the city’s east side—the site of the mural above. I’m standing on Kercheval Avenue; the cross street with the light is Alter Road, and Detroit continues beyond in its full devastation—a gap-toothed streetscape once filled with two-story commercial buildings, most of which the City demolished long ago, while the survivors are rarely in a condition better than dilapidation. 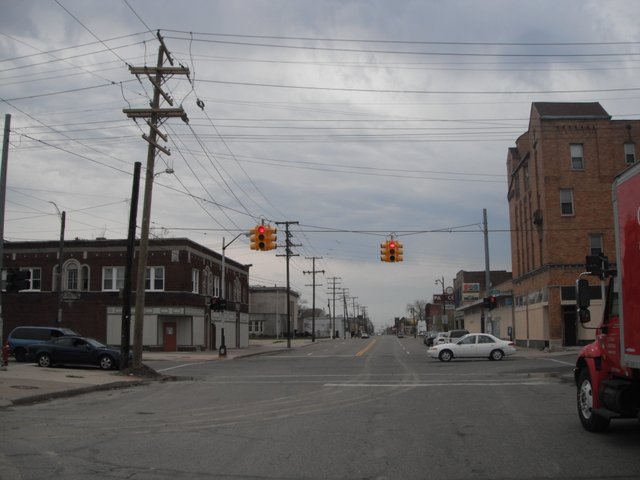 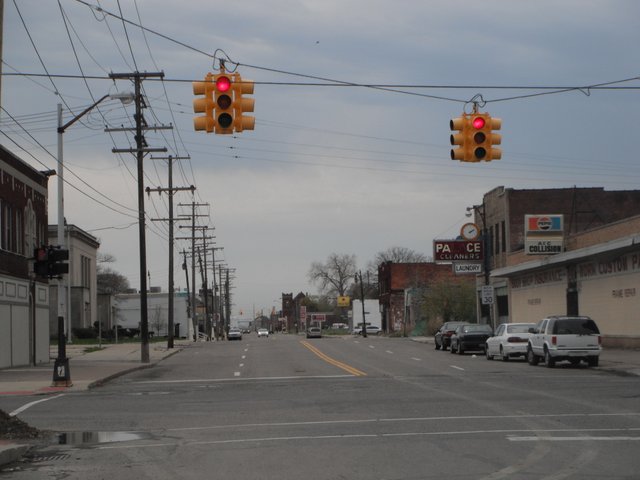 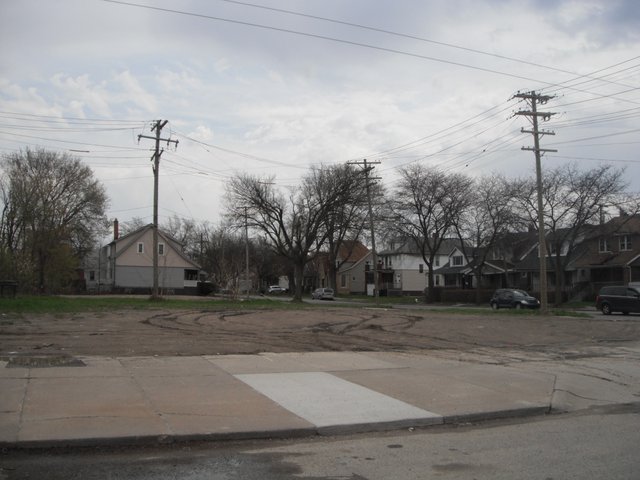 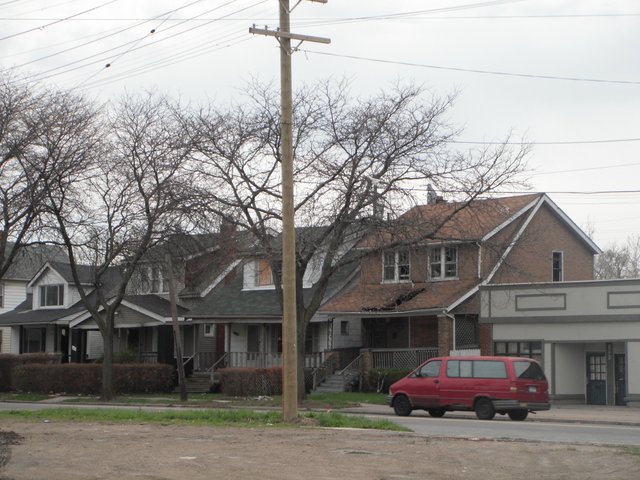 The fact that four consecutive homes are standing on the east side is a relatively uncommon sight. But it doesn’t take much scrutiny to see that the two rightmost homes are vacant and decaying.

Meanwhile, standing again on Kercheval Avenue turning the other direction confronts me with Grosse Point Park, a generally very active pedestrian-scaled main street that serves as the commercial spine for a series of suburbs, all of which contain the words “Grosse Pointe” and are among Detroit metro’s most affluent communities. Here’s what Kercheval looks like on the Grosse Pointe side of Alter Road: 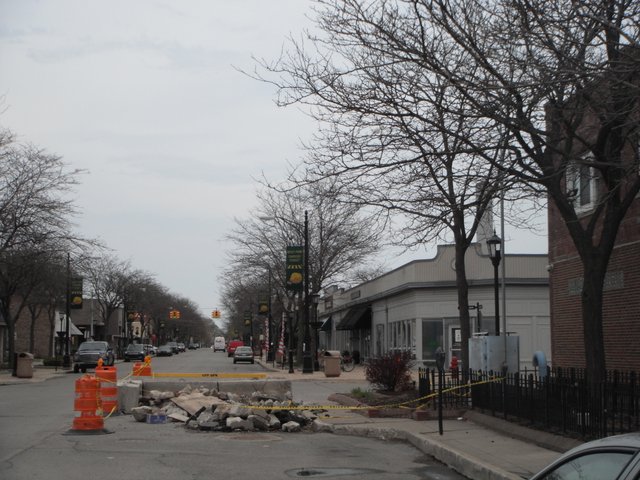 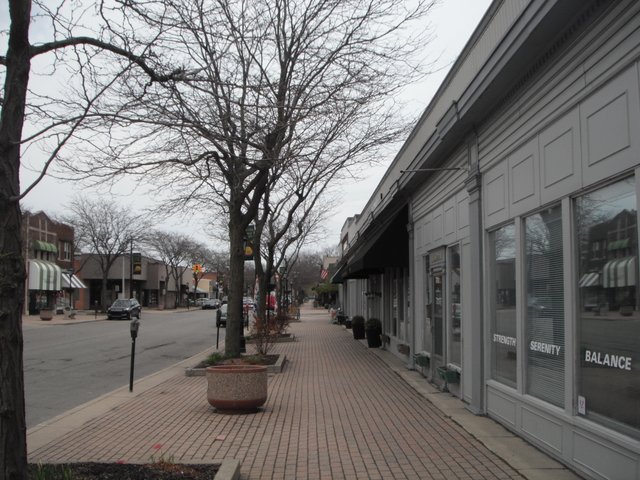 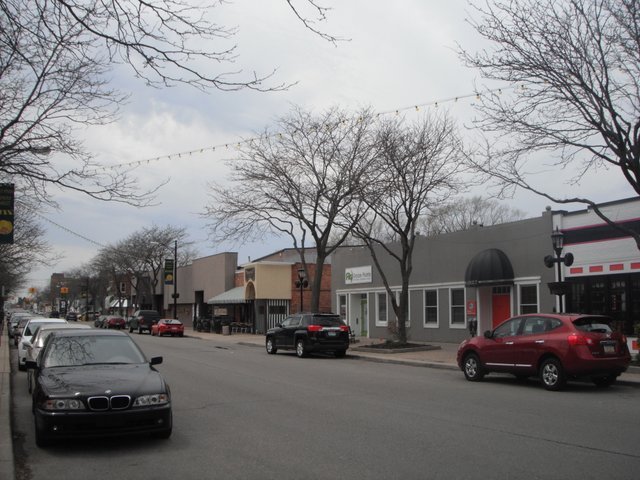 The difference is about as extreme as you’re likely to find in this country. Much more so, in fact, than Eight Mile Road. In that northern part of town, Eight Mile splits the middle class homes of suburban Ferndale from the Detroit side, where, just south of Ferndale, some of the region’s most opulent estates rest in the Palmer Woods neighborhood. (Though still intact, the 10,000-square foot homes of Palmer Woods often ask for less on the market than the 1,500-square foot homes of Ferndale; such are the extremes in this most polarized metro.) Meanwhile, the Grosse Pointe suburbs are much tonier than anything in Ferndale. But the Detroit side? Completely devastated, by and large. Thus, the lesser-known Alter Road offers a much starker demonstration of stratification than Eight Mile.

[It would be irresponsible for me not to mention that, since these photos were taken in spring of 2014, further construction along Kercheval, just a few hundred feet from the mural, transformed the road into a series of farmers’ market stalls. This circular configuration of little shops completely blocks vehicular traffic on Kercheval, to enhance the retail experience, according to civic boosters. The installation immediately incited tremendous controversy, with numerous arguments asserting that it was reinforcing the gulf between Detroit and the Grosse Pointes, particularly considering the back of the farm stalls were facing the Detroit side. Activists on either side of the city line have pushed for the stands to come down; the story is ongoing. Early coverage can be found here, the aftermath of the Kercheval closure here, and a more recent assessment here. The Kercheval closure is no doubt worthy of a blog topic, but I reserve that to the many others who have followed it far more closely and much more passion than I ever could.]

Bearing in mind the huge differences between the two sides of Alter Road, the mural on Kercheval assumes a much snarkier tone. After all, it’s the message Grosse Pointers see as they are leaving their city on Kercheval and entering Detroit. . “Smile! Your dad’s from Detroit!” (But you sure aren’t!) Though the family-oriented Grosse Pointe suburbs skew a bit older than hip, yuppified Ferndale, it’s nonetheless safe to assert that, by this point in time, most Grosse Pointers really are the sons and daughters of Detroiters—that it really was their dads, or even their granddads, who grew up in the city. Even though the Grosse Pointes are less of a bastion of WASP privilege than they used to be (Grosse Pointe Park featured in these photos was 15% non-white in the 2010 Census), they remain characterized by affluence, well-functioning public services, highly attentive law enforcement, good schools, and, yes, some charming commercial streets such as Kercheval. The mural, despite being in the Detroit limits, is thumbing its nose at Detroit. Such a mural wouldn’t past muster if Detroit had something akin to Philly’s Mural Arts Program. But a guided civic arts group can also force out unpleasantly candid social commentary…even something as mild as this mural. And compared to other unauthorized artistic expressions in Detroit (such as this or this, a sardonic, boundry-line welcome sign is tame stuff.

PrevPolishing an old heirloom.
Pulling out a few more of the stops.Next

5 thoughts on “Because public art can tow the party line.”