A multitude of American cities have experienced resurgences in their urban centers over the last decade. Nonetheless, it typically seems that one city in particular enjoys the lion’s share of favorable publicity for a few years…and then passes the baton to another. New York wore the crown through much of the late 90s, with a much-bruited (and eventually confirmed) reduction in crime during the Giuliani administration, all on the eve of the September 11 attacks. Chicago carried the torch in the first half of the aughties, recognized as not just a national but global center for design, coupled with a resolute “American-ness” never ascribed to coastal cities, which the cities many distinct, powerfully branded neighborhoods manifest. (An uptick in crime and the discovery that those population gains of the 90s were an aberration has somewhat dimmed Chicago’s luster, but the successful neighborhoods—disproportionately clustered on the north side—generally remain as attractive as ever.) But few places could make a bold claim of revitalization during the last two years of the previous decade, when the real estate collapse and ensuing foreclosures effectively sabotaged many cities’ efforts at stabilizing some of the most long-struggling older neighborhoods. A number of municipalities reported population losses by 2010, due primarily to the meteoric rise in foreclosures after 2008.

One city, however, weathered the turbulence of the Great Recession inordinately well. The nation’s capital reported net job gains at a time when even traditional powerhouses like the Bay Area were floundering. And the city itself reported a population increase of 5.3% from 2000 to 2010, according to the most recent Census report—the first period of measured growth since 1950. 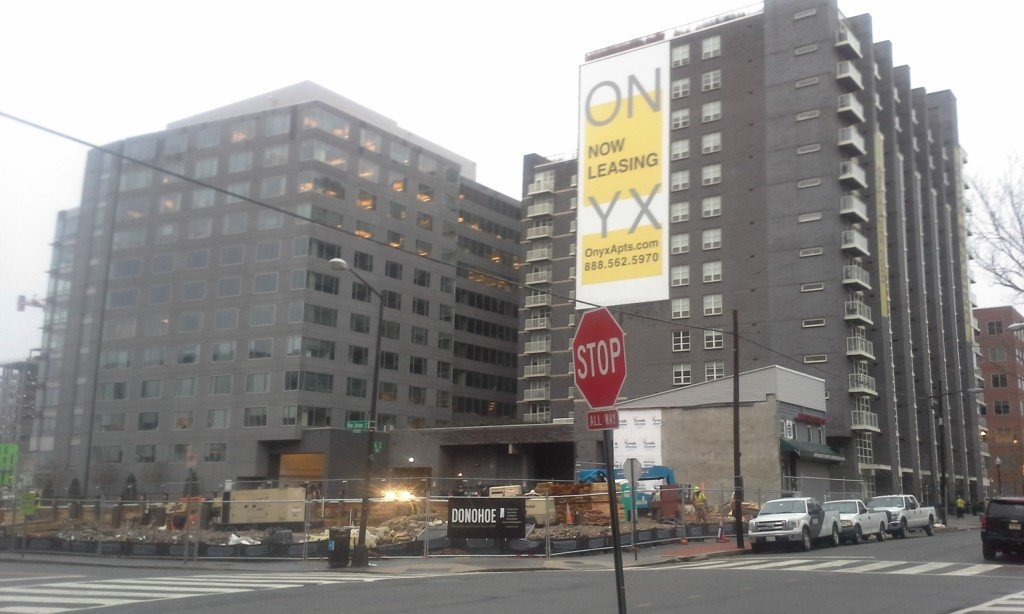 Washington DC may not have distributed its renaissance evenly across the entirety of the 68 square miles, but it’s not isolated to a few lucky corners either. One area that has responded particularly well to the District’s increased demand for housing is near the Navy Yard, just south of the US Capitol building. After World War II, the Department of Navy no longer needed so much land and thus restricted its operations to a much smaller site along the Anacostia River. For decades, the blocks encircling the Navy Yard had hosted some of the city’s most depressed neighborhoods, a variety of industrial centers, seedy commercial strips, and among the highest concentration of low-income households, through the Capper and Carrollsburg public housing projects. Virtually all of these old haunts are gone now, and the neighborhood is steadily gentrifying into a mixed-use district of high-end apartments/condos, retail and commercial. The picture below effectively juxtaposes the new and the old, with the squat structures in the foreground—now a rarity in the neighborhood—reminding passers-by of what the neighborhood used to be. 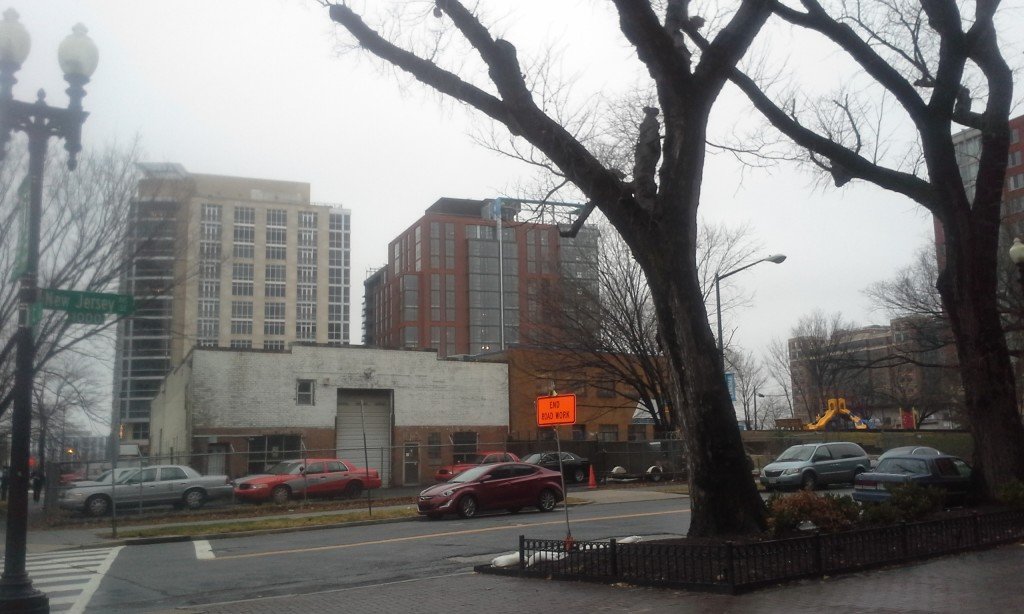 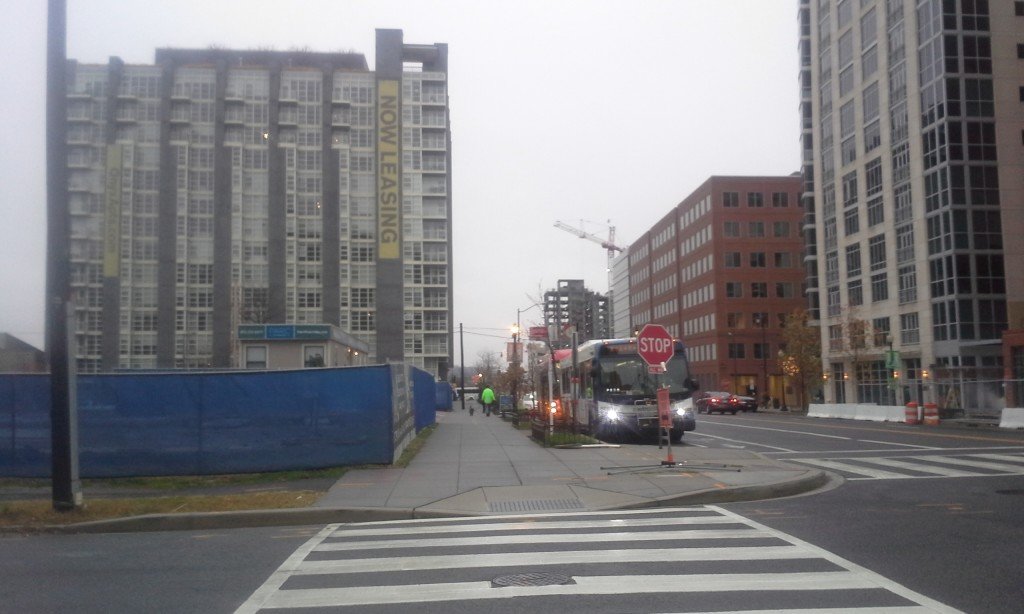 Perhaps most significantly, the Department of Transportation (DOT) relocated to the neighborhood in 2008, providing a sizable employment hub. And, of course, Major League’s National’s Park sits at the neighborhood’s western edge.

And yet, amidst all this development is an anomaly: the hollow center of a meringue. 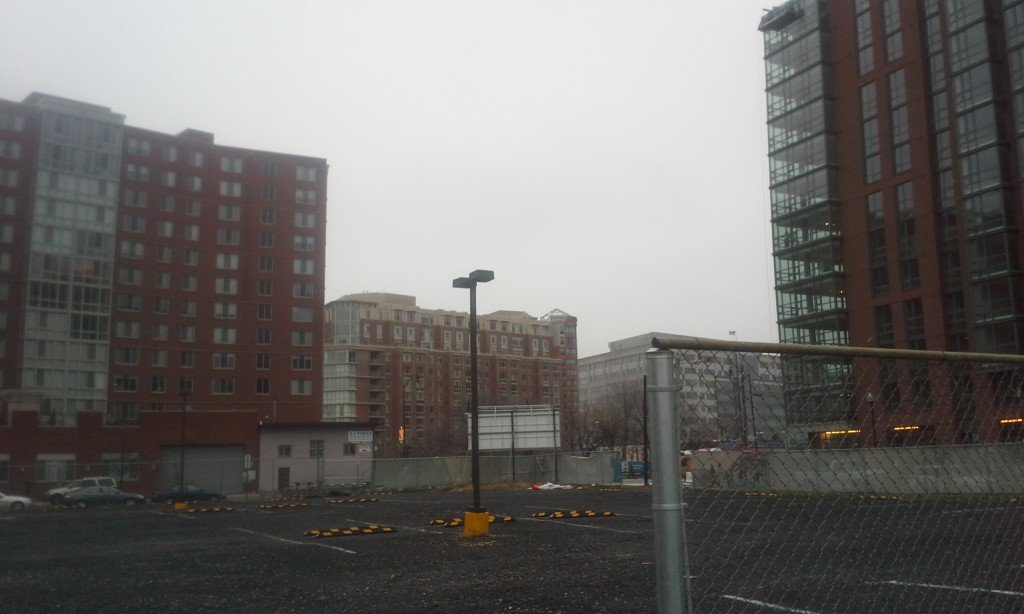 It’s a big parking lot, at the intersection of Half Street and I Street SE. Not only that, but it’s kind of a cruddy one. 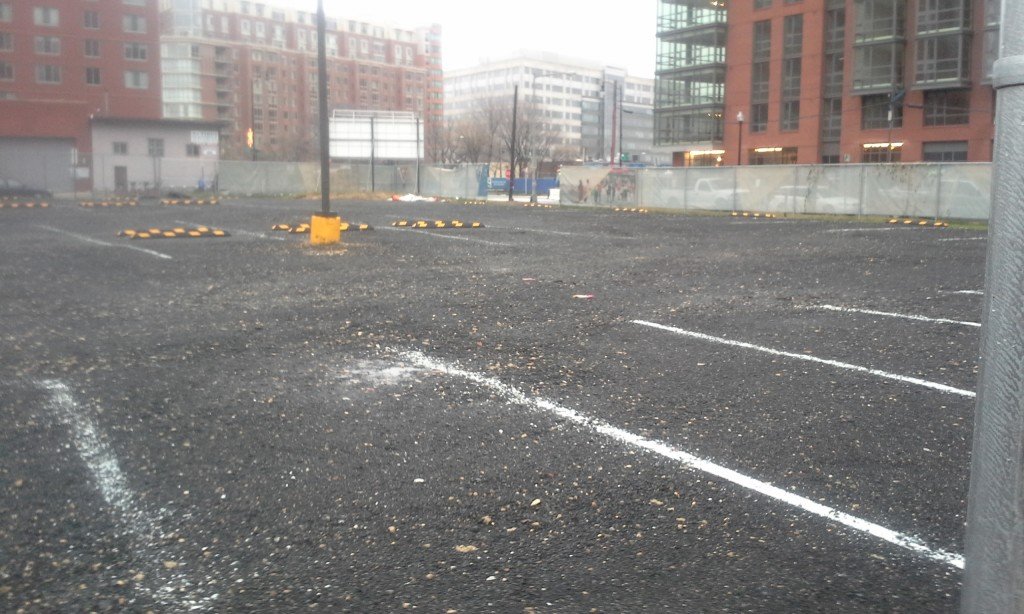 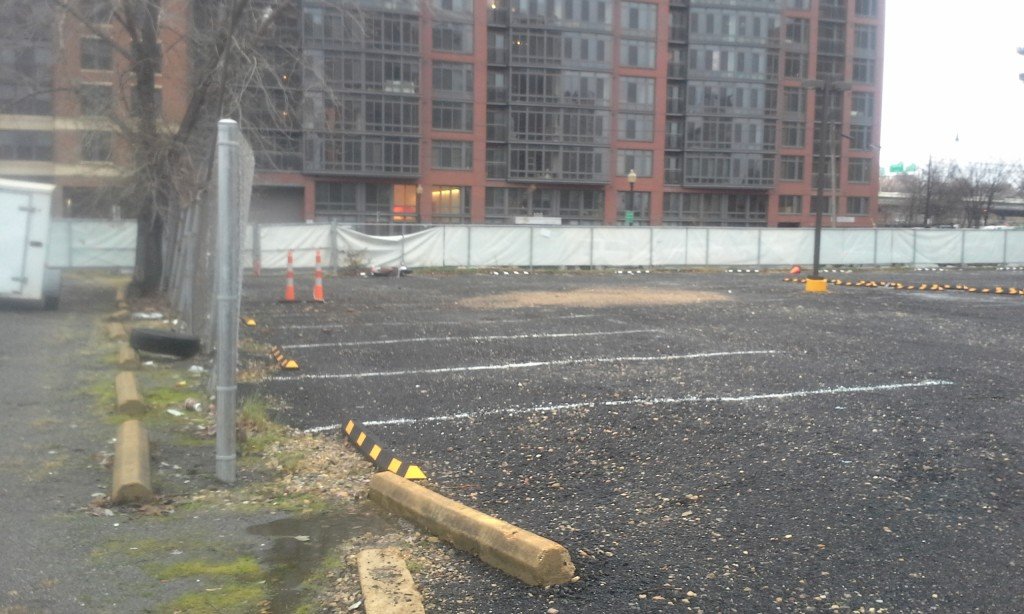 The stripes aren’t very even, the bumpers are hit-or-miss, and the paving job looks incredibly low-rent. 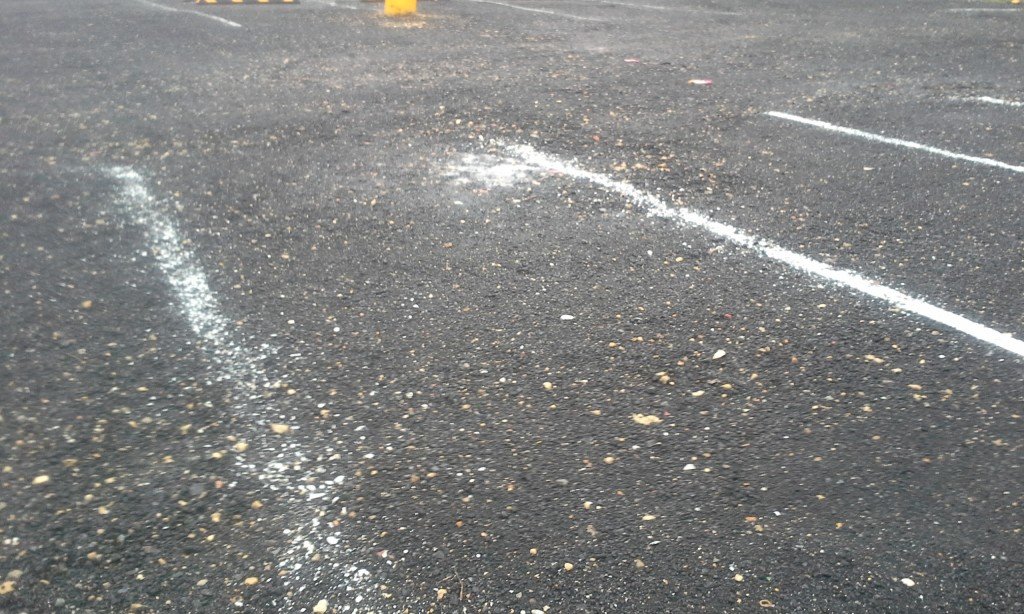 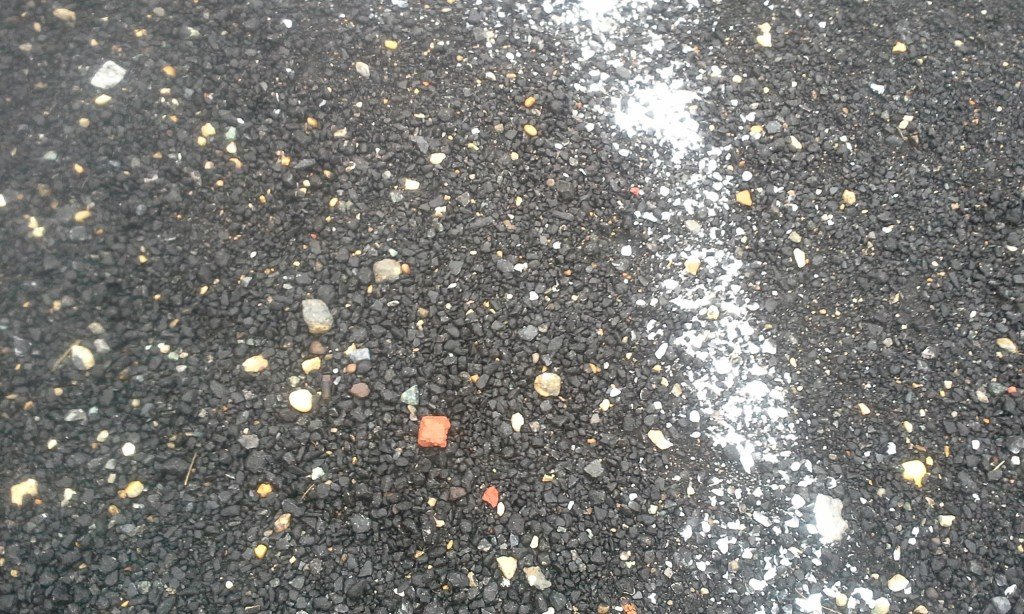 It’s baffling enough to see an entire block devoted to parking in an area where high-end mixed-use developments are springing up like dandelions, but couldn’t the owner have at least invested in a nice looking parking lot?

It turns out there is a rationale behind the shoddy infrastructure. 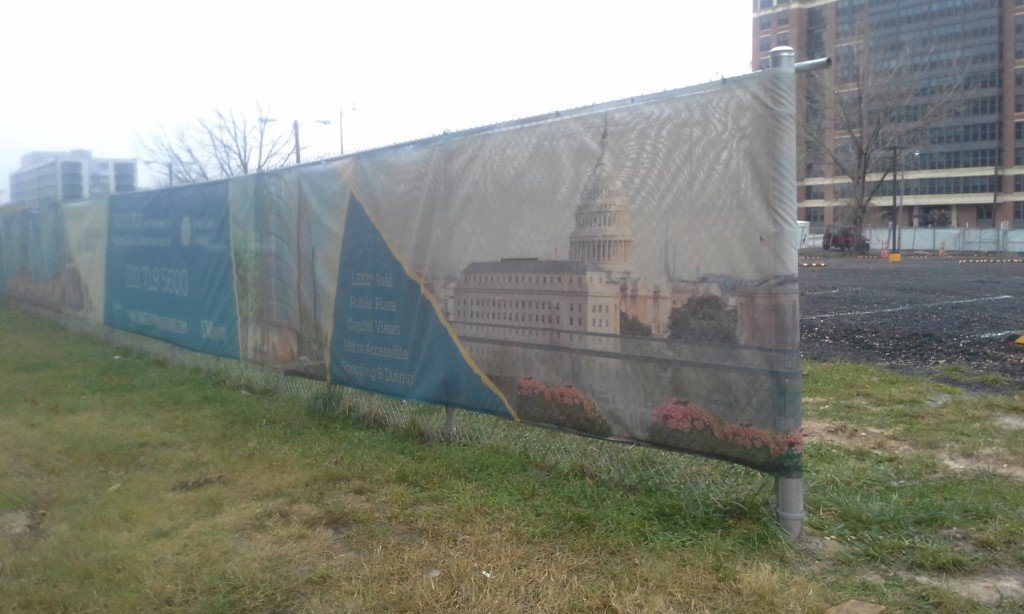 Advertisements for the next big project festoon the perimeter chain link fence. It’s only a matter time before another housing (or mixed-use) development replaces Potomac Parking. I don’t know if the parcel recently changed hands to prepare for the next big mid-rise building, but it doesn’t really matter. Whoever owned Potomac Parking these last few years was shrewd enough to recognize any elaborate grading and surfacing on this piece of land would be money down the drain.

This is common practice when rosier prospects for a property are waiting in the wings. After the City of Indianapolis imploded its aging Market Square Arena (at a geriatric 30 years) in 2001, just three blocks from the heart of downtown, a few proposals for high-rise apartments/condos emerged. But none really caught fire. The City knew it was only a matter of time, so it covered the two half-block parcels on either side of Market Street with a gravel surface, transforming it to a clearly recognizable parking lot but with a much lower price tag than cement. Not only was the decision cost-efficient, it made a more compelling argument from an ecological standpoint: while gravel is hardly a model example of a pervious surface, it is still less impervious than conventional pavement. A gravel parking lot generates less stormwater runoff by allowing at least a little percolation into the underlying soil, which is more than can be said for an expansive sheet of cement. Reduced runoff translates to a diminished need for stormwater management infrastructure…which of course translates to further cost savings.

The tactic worked for a while, but after a few more years, the City of Indianapolis caved to pressure. When the real estate market collapsed in 2008, prospects for redeveloping the old Market Square Arena site began to fade. Adjacent parking lot owners complained that this particular lot was beginning to look increasingly less temporary, and the fact that it remained gravel put its operation at a great advantage (and other lot operators to a disadvantage), since gravel has lower costs to maintain than all the other lots downtown, which the law obligated to remain paved. By 2010, after nine years without a viable redevelopment plan, the City paved it over.  Four years later, the City has finally received clear, confident proposals for either of the two tracts that make up the old Market Square Arena site: an apartment high-rise on the north side and the recently revealed Cummins campus on the south. 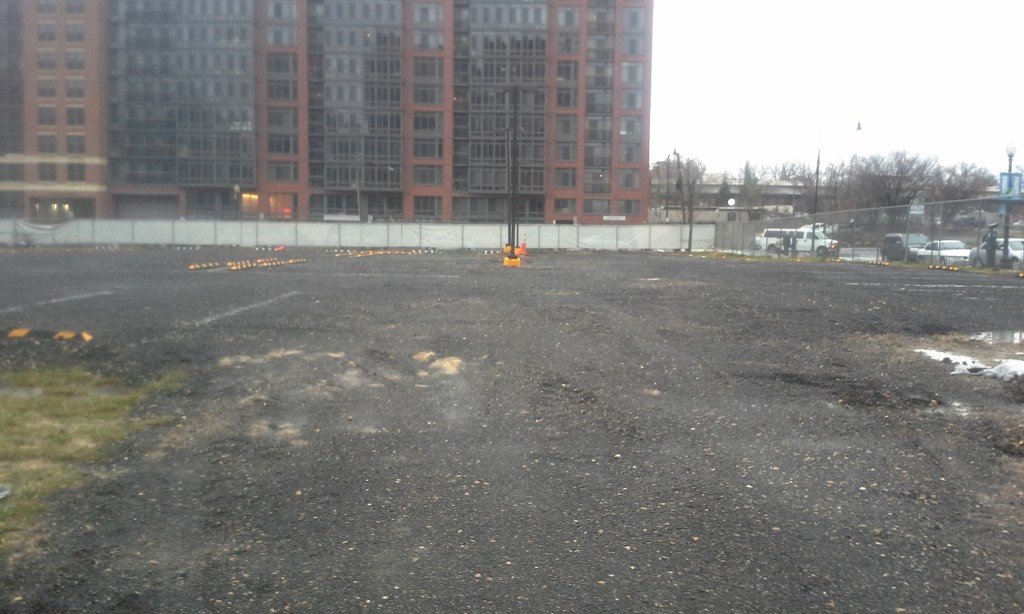 It doesn’t look like Washington DC is going to have to wait that long. A new mid-rise should emerge from the gravel within the next few months, filling a neighborhood void and enriching the owner of Potomac Parking in the process (if he or she isn’t fantastically wealthy already). And while the current gravel lot is less pervious than the typical building’s rooftop, it’s possible that this new developer may take a cue from the folks down the street at the DOT Headquarters, which integrated a variety of green features to earn the coveted LEED Platinum rating. If the new development at Potomac Parking adds anything even remotely pervious it’ll result in a big win, not just in terms of real estate (a higher and better use) but in terms of the localized economy of the Navy Yard neighborhood. Washington DC should be so lucky…except—let’s face it—it already is.

One thought on “Porous placeholders.”