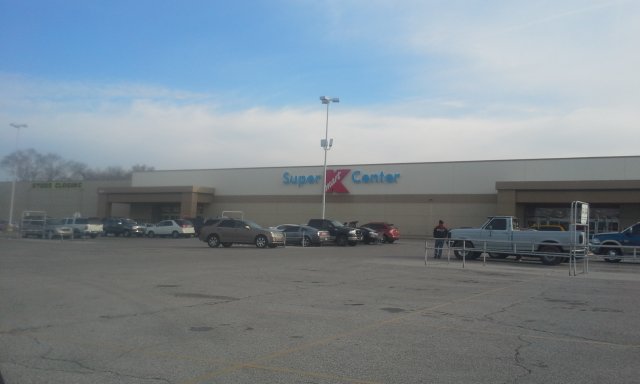 The news over the past few months that Sears Holdings Company is closing a slew (over seventy) of its two primary chains (Sears and Kmart) should come as no surprise to anyone who reads this blog…or anyone with a pulse, for that matter. I’ve rung the death knell on this formerly legendary budget department store several times in the past, noting in particular how its failure to compete with Walmart has consigned it to struggling inner-ring suburban neighborhoods—the only areas where it can retain a toehold, because Walmart does not typically locate there. The only shocking thing about this latest announcement is that the parent company couldn’t even wait until the holiday season, which usually serves as the bellwether for retail health.   Most of these Kmarts and Sears will close before Christmas.

Earlier this fall, a spokesperson for Kmart/Sears announced that two Kmart locations would face the axe in metro Indianapolis. Then, a few weeks later, a second announcement revealed the closure of yet another. At the end of this pruning, this Midwestern metro of slightly under 2 million will have only three Kmarts left—a proposition that would have seemed impossible as recently as 1985, before Walmart’s ascendency, when a metro the size of Indianapolis could claim at least a dozen Kmart stores, and at a time when the metro was a half million smaller than it is now.

This location, essentially on the edge of the Garfield Park neighborhood just two miles of downtown, exemplifies what has passed for “Kmart territory” for the last decade. While Garfield Park remains one of the city’s most favored urban greenscapes, and the nearly century-old homes of the neighborhood are generally well-maintained, many of the other neighborhoods nearby are struggling, and the area in general generally has a poverty rate above the metro average. And now this Kmart is closing. 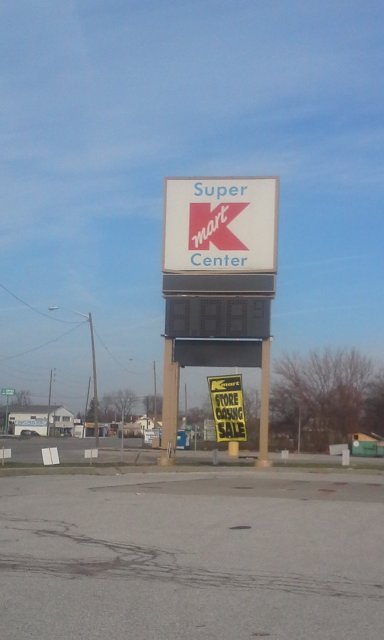 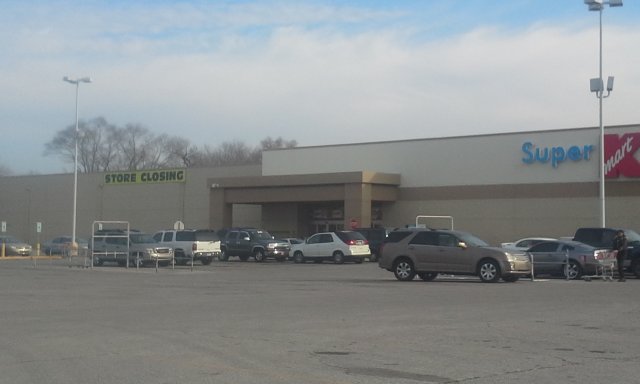 Floundering though Kmart may be, its closure is unlikely to yield any net benefit to the surrounding community. Not only does it deprive a fairly densely populated area of a reliable source for budget clothes, electronics, household items and groceries, it would leave a vacant grayfield site of considerable size—probably somewhere around 100,000 square feet. And, since the neighborhood itself is of widely variable economic health, it may be hard to attract another tenant to this site any time soon. Walmart? Not bloody likely.

Then again, this particular Kmart at the intersection of Madison and Southern Avenues does have one ace up its sleeve: 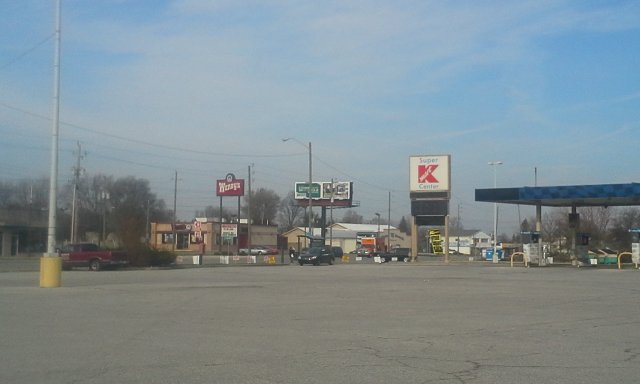 While the majority of Kmarts offer a time warp to the mid 1980s, this Kmart took the ambitious leap to include a gas station on site—a trend that has exploded in the last decade or so. 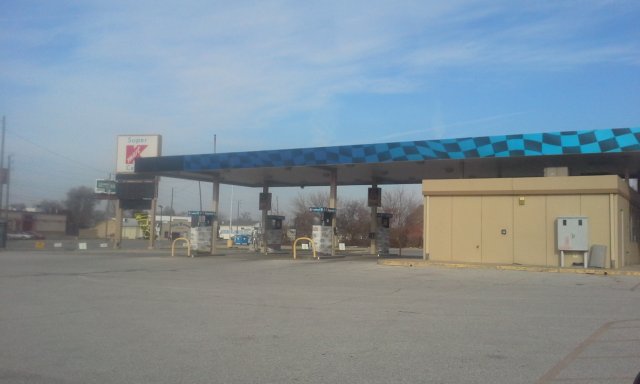 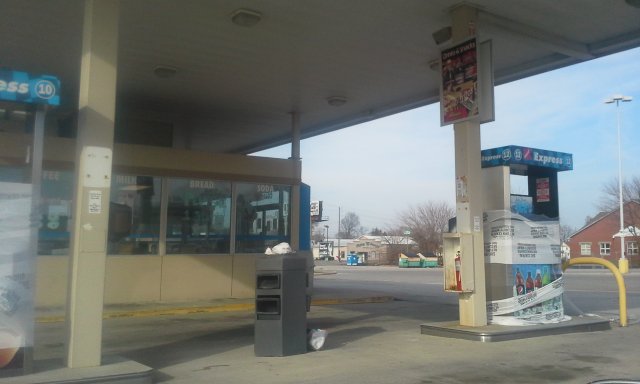 The station might already be closed (at the time of the post, the Kmart itself was still liquidating its inventory), but it has not been out of service for long. At this point, physical alterations to the station to get it running again would be minimal.

It’s rare that any urban advocacy blog will get excited about a gas station. After all, they have become the default LULU (Locally Unwanted Land Use). They serve as an easy, uninspiring infill development at corner parcels throughout lower-income urban neighborhoods, and they are usually permissible under conventional Euclidean zoning. They might be ugly; they might harbor unpleasant fumes, excessive vehicle traffic and loiterers; they might lower the property value of adjacent residences. But they are reliably profitable and often represent an easy return on investment for an unimaginative landowner. Most of urban America has far more gas stations than it needs, because the market drive supersedes the political will to stop them.

But in the case of this Kmart on South Madison Avenue, the gas station may be a saving grace. The parcel was never pedestrian-scaled, even if many of the surrounding neighborhoods are fairly walkable. The pumps just sit in the corner of a big parking lot. And, as many of us have come to notice, it has become increasingly desirable for big box retail establishment to offer a gas station on the periphery of their own properties. Walmart has been doing it for quite some time. So has the powerful Midwestern discount competitor Meijer. National grocery chains like Kroger took up the practice as well, in more recent years. (I haven’t seen it yet with Target, but it’s probably only a matter of time.) Even much smaller regional grocers, such as Weis Markets in the Mid-Atlantic, have started building gas stations on site or in close proximity to their primary buildings, so that shoppers can accrue points for purchasing groceries, which they can then apply to get discounts on gasoline.

In fact, it has become so desirable for big boxes to include a gas station that some major developments refuse to have it any other way. A few years ago, the Indianapolis Business Journal recognized a small, dreary, long-underperforming Kroger in a historical low-income but steadily gentrifying neighborhood, in which the community had pushed aggressively for renovations that might make it desirable again to the increasingly affluent surrounding population. Kroger was interested in rebuilding on that exact site, but only if they could include a gas station. The new Kroger would also be larger—according to the spokesperson for the chain, it would ideally triple in size, expanding onto the site of three nearby 1930s apartment buildings that would get demolished. Needless to say, the local neighborhood associations were vigorously opposed both to a gas station going up in their community, as well as the destruction of those old apartment buildings, one of which the owner had significantly refurbished. These neighborhood associations envisioned a much more urban configuration in keeping with the surrounding character: that is, a Kroger built flush to the street, in which the development could either discreetly tuck the parking in a garage behind the store or place it on the roof of the building. Kroger refused and the redevelopment proposal collapsed. The dingy little Kroger remains.

But here, at this long-standing Kmart on Madison Avenue, the footprint and infrastructure for the grocery/gas combo are already there, which significantly boosts the parcel’s likelihood of redevelopment, with a reduced need for expanding the existing building’s floorplate. Meijer could easily pick up the property. While it might be smaller than the usual Meijer supercenter, the Michigan-based chain has taken on economically challenging environments in the past, the city of Detroit among them. And while Walmart typically balks at locating in areas that are below that area media income, the mega-corporation has been known to take slightly greater risks in the expansion of its “Neighborhood Market” concept. And Kroger? Not bloody likely, but since the company insists on “food, fuel, pharmacy and floral”, the space could allow for it. 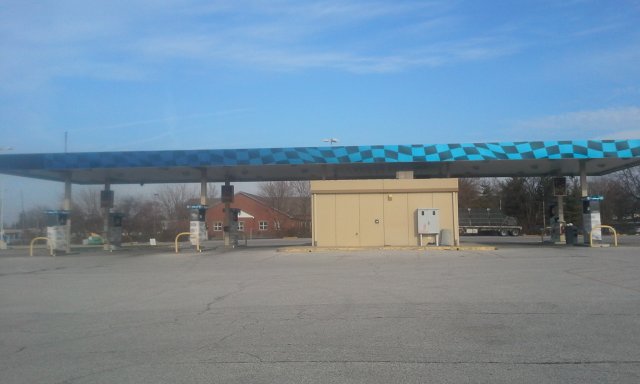 Gas stations will continue to proliferate wildly if they go unchecked. But it’s equally important to recognize that even undesirable uses have their place in the landscape of commerce. For the most part, the negative externalities elicited from an unwanted land use are still less than if that same property languishes in desuetude through years of vacancy. The residents of Garfield Park should be so lucky if a major grocery store replaces the Kmart—and the points they earn from groceries should give them access to a much lower-cost gas station as well.