Fencing in the human will.

Driving westward from the suburbs to downtown Grand Rapids earlier this year, I came across an unusual road sign. 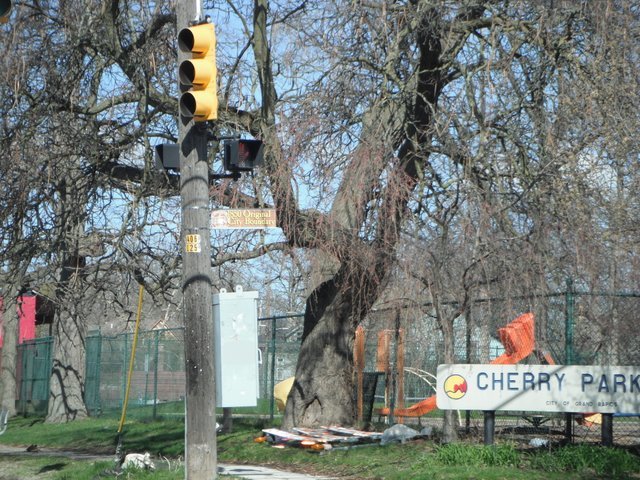 Needless to say, it wasn’t easy to read, but it clearly wasn’t a conventional one. In Grand Rapids (as in many cities), most street signage uses a bold, white sans-serif lettering against a green background, as seen in this intersection uptown— 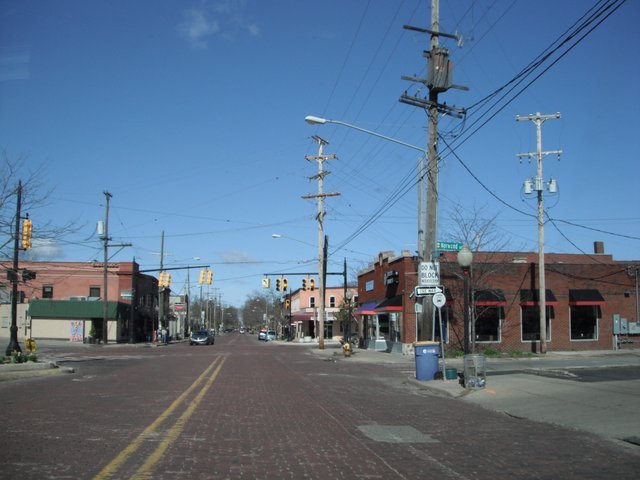 –or the partially cut-off sign in the upper right corner of this photo from downtown Grand Rapids. 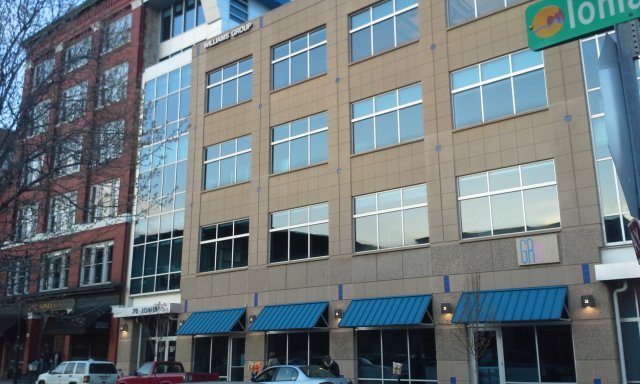 But not this one. A slightly more zoomed in view should clarify. 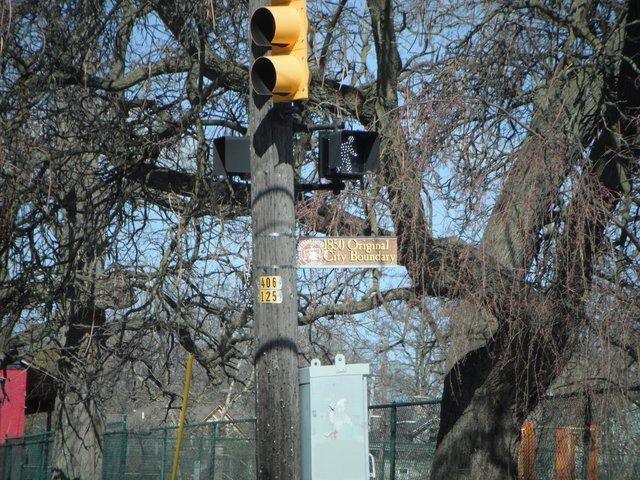 It’s acknowledging the boundary when, in 1850, the approximately 2,500 inhabitants of the village of Grand Rapids voted to accept the proposed city charter, transforming it into a city. It’s safe to assume that, at that time, the road perpendicular to the one where my car was idling—called Eastern Avenue—represented the outer fringes of what was then a small settlement, since it was a whopping three-quarters of a mile away from the city center. While it may seem unremarkable, such a sign—showing not the current entry point but a boundary of yesteryear—is extremely rare.

But the road hardly indicates the outskirts of town these days. Eastern Avenue is fully steeped in what one could easily call “the inner city” if that phrase didn’t unjustly carry such negative connotations. As it stands, the road doesn’t represent much of a gateway of any sort; it’s just a cross street, loosely separating the distinctive Heritage Hill neighborhood to the west from the trendy, revitalizing streetcar stops along Wealthy Street to the east. But beyond this tiny sign, nothing shows that this was once the outer limits to what is today Michigan’s second largest city. In fact, the Google Map below reveals that the intersection of Cherry Street and Eastern Avenue—the site of the above photos featuring the small sign, indicated by the purple circle—is at least a mile away from any eastern border to Grand Rapids, represented by the irregularly dashed red line near the righthand side of the map.

No doubt the Village of Grand Rapids grew to the City and to the metropolitan area that it is today through a variety of factors, many of them economic. But political gestures play a huge role in both inducing population growth, as well as in what determines the distance from the edge to the center of town. The legislative act of annexation is still commonplace across the majority of the country, with the exception of the Northeastern states, which are largely fully incorporated and thus have no capacity to expand their boundaries further. But in the Midwest, it has proven a useful tool to “shore up” a tax base, so to speak, when it looks like the population within the existing city limits is on a trajectory of decline. An article by Garret Ellison on MLive from earlier this year observed how this trend took place in the 1950s and 60s, when Grand Rapids, like many cities, was witnessing outmigration and depopulation of its older neighborhoods, while the land in the purlieus was developing rapidly with tract housing and new shopping malls. The City of Grand Rapids wanted to capture some of that growth.

My guess is that City Hall wiped the old 1850 Grand Rapids boundary from its legal records long before the 1950s, and it goes to show both the capacity and limitations for municipal annexation to alter the perceived character of a city. Fundamentally, it’s a numbers game. Cities annex the surrounding territory to incorporate more assessable land and households into the incorporated area. Population usually goes up, but population density almost invariably decreases, since those surrounding areas are less heavily developed. The aftermath of annexation best explains why Northeastern cities often get perceived as more “urban” and “walkable” than Southern or Western cities; these municipalities in Pennsylvania, New Jersey, New York and Massachusetts are the least likely to have annexed from their 19th century (or even 18th century) incorporated limits. Conversely, Southern cities are still annexing like mad, bringing newly developed and sometimes completely rural areas into their limits. At approximately 4,200 persons per square mile, Grand Rapids falls somewhere in the middle: lower density than similarly sized cities in the Northeast, but much higher density than most of its Southern counterparts.

Do city boundaries have much bearing on how outsiders like me navigate through town? Probably not. Fundamentally, all cities—Midwestern, Southern, Northeastern—have a tightly wrought, walkable core that may or may not be economically healthy, followed by a transitional suburban area that is much less walkable because of automobile-oriented development patterns. Continue a bit further outward, and the character shifts to newly developed, exurban lands or completely rural. The size of each of these three “transects” (to appropriate a planning-work term) depends far more on the growth patterns of the cities themselves during various time periods—much more than it has to do with their boundaries, which have changed repeatedly over the decades and (excepting a few Northeastern states) will likely shift again in the future. Northeastern cities typically boomed before the automobile, so their walkable centers are much larger than cities in the South, which, for the most part, didn’t explode in population until the last fifty years or so. Back in the Midwest, the Grand Rapids sign at Cherry Street and Eastern Avenue is probably appropriate: a relic and a reminder, but hardly a gateway for a city whose best days are still ahead of it.

2 thoughts on “Fencing in the human will.”