Imagine a major city where owner-occupied, single-family housing dominates the landscape, more than anywhere else in the country. Complete with garages, chimneys, front yards, back yards, one-and-a-half baths (minimum), and more than a few basements. Virtually all the houses sit on lots of equal size, with nearly identical space between them and the exact same setback from the road. Most of the homes face the axial north-south streets, while the east-west rights-of-way simply provide lateral access to a succession of parallel drives, stitching the neighborhood into a latticework with 30 to 60 homes on each tidy, expansive block. Few homes claim addresses on those latitudinal roads. And the overwhelming majority of the blocks are 100% residential; the corner convenience store is almost unheard of. If the neighborhood has any shopping with in walking distance, it flanks the larger thoroughfares that slice across these vast residential tracts, usually at one-mile intervals. Generally speaking, it looks like this. 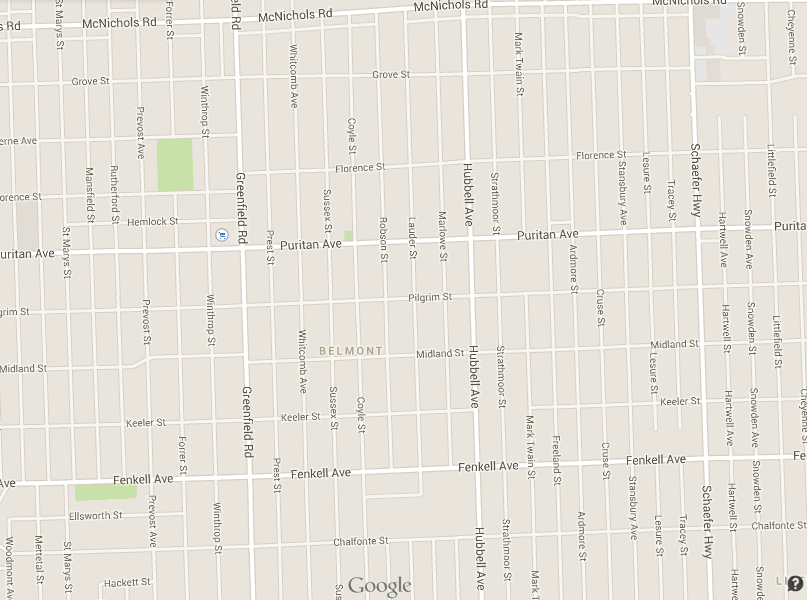 At least in 1945, when the automobile industry was still propelling Detroit into the top tier of world cities, this settlement pattern embodied the American dream for most families of modest means. With the possible exception of Los Angeles, no other city came so close to perfectly quenching the nation’s collective thirst for a detached home that the occupier could own. (Even the Los Angeles of 1945 probably lost out to the Motor City. Though the two cities were of relatively similar size, seismic concerns most likely pushed the cost of LA’s housing northward, while Ford’s Detroit still benefited from pioneering what today we would call a “living wage”.)

For a short time, Detroit was a global paradigm for homeownership. Blight-scarred as most of the city may be today, the more intact neighborhoods still evoke this ideal, even though many of the bungalows or Cape Cods in Warrendale or Osborn or Morningside are worth little more than what we might typically withdraw from an ATM. Generally speaking, the neighborhoods with higher construction and architectural standards remain more intact than those that sprung up faster than a Levittown, but only a few tiny subdivisions across the city deviate from this pattern of elongated quadrilaterals—an orchard fecund with single-family homes.

Which is what makes focal point of this blog such a Detroit anomaly. 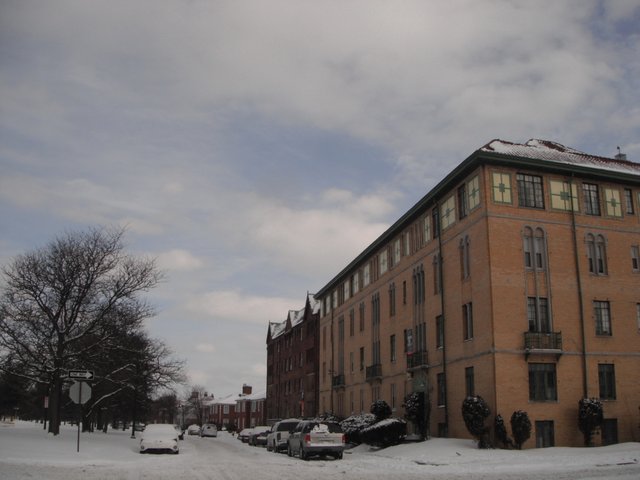 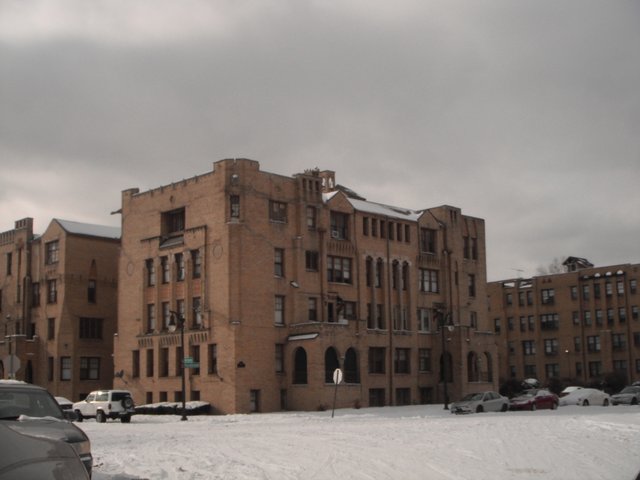 The Palmer Park Apartment Building Historic District broke ground in the 1920s, with a structure called the Walbri Court Apartments built by Albert Kahn, the prolific “architect of Detroit” whose legacy pervades in many quarters of the city. Approximately forty other buildings followed through the next few decades, touching on a variety of architectural styles, though Detroit’s signature Art Deco may remain the most prevalent. It should come as no surprise that, given the time period in which the neighborhood grew, these apartments aren’t surrounded by vast parking lots. They consist mostly of low- and mid-rises between four and six stories, tightly packed together along just a few, atypically curvilinear streets. 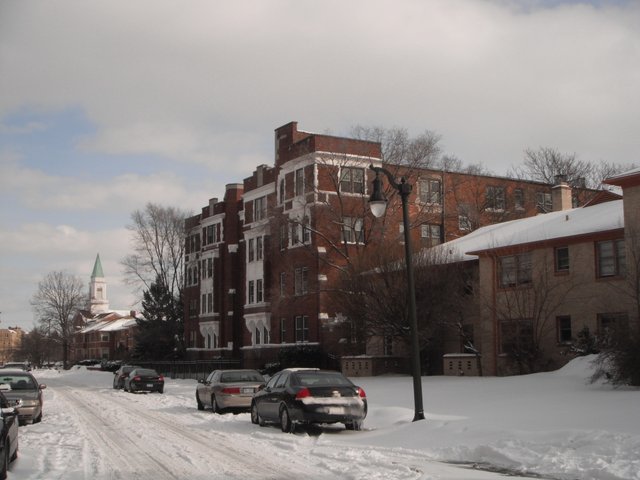 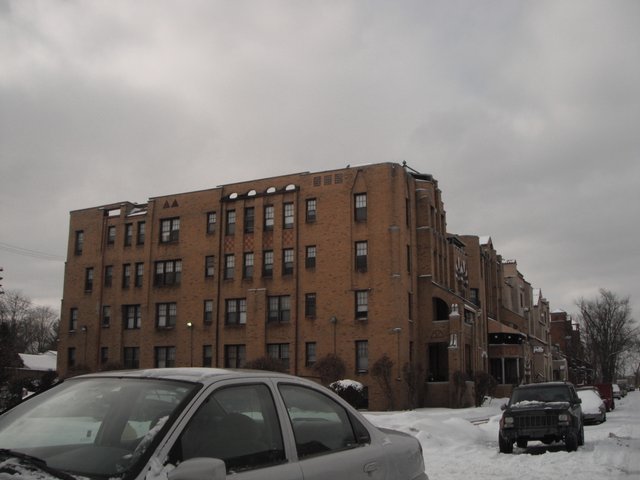 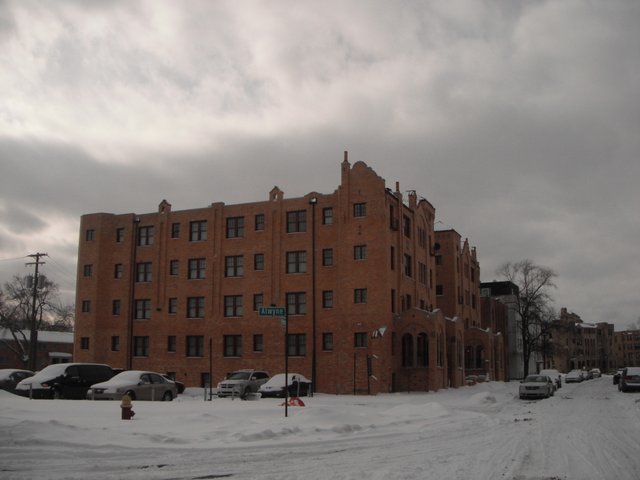 The more recent constructions (presumably the last parcels to get developed) are much more mundane, though champions of the mid-century aesthetic may still find something to cherish. 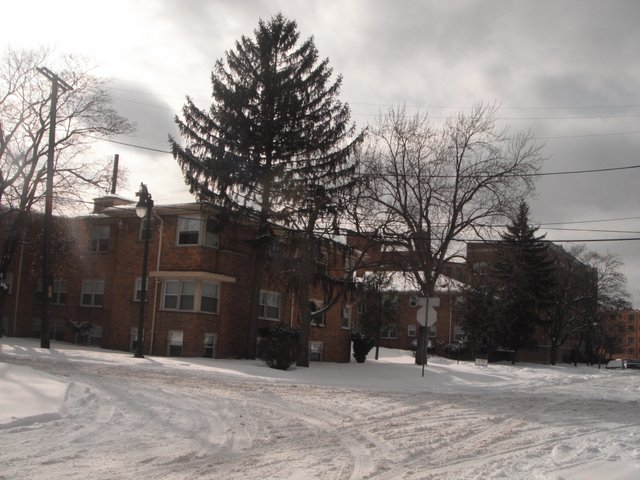 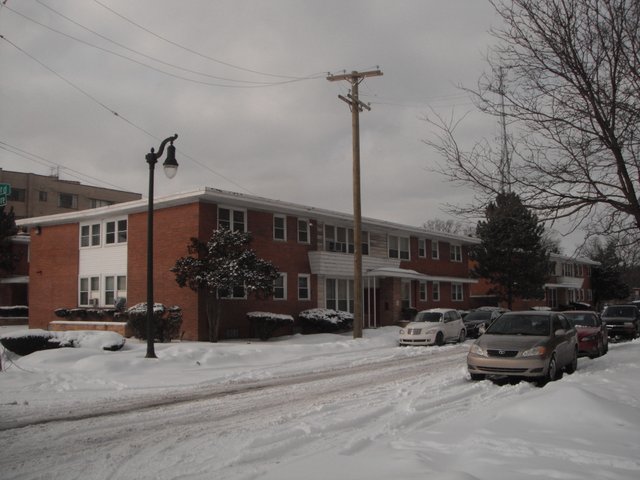 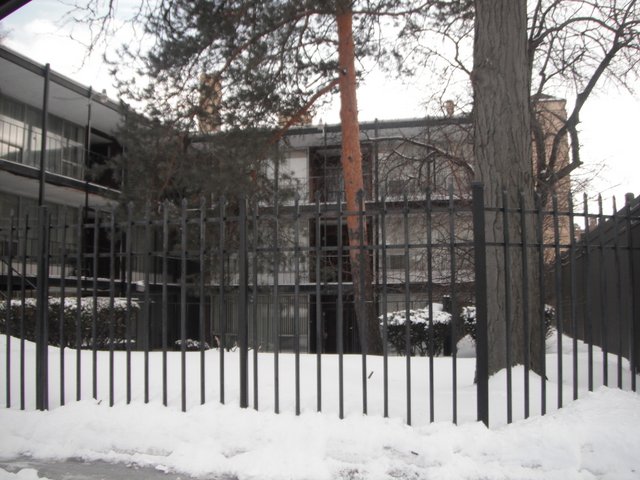 Regardless of the age of the housing, Palmer Park is without a doubt an apartment neighborhood. With a popular park to the north that shares its namesake, the Detroit Golf Club to the west, and considerable urban blight in the other directions, Palmer Park’s location now seems almost arbitrary. Why build a cluster of apartment buildings at a spot in the city that’s closer to the suburbs than to downtown? At one time, the land that now comprises both the park and this apartment district belonged to the supremely wealthy US senator Thomas Witherell Palmer, but he died before he was able to develop it. However, the successive owner of the estate, Walter Briggs, apparently saw a considerable amount of untapped demand for new rental units in this owner-occupied city, so he developed it into the eclectic assortment of multifamily buildings that survive today, many of which now contribute to the neighborhood’s status as a nationally recognized historic district.

Even in a metropolitan area that blossomed through homeownership more than most, at least some households will still choose to rent, either because they lack the wherewithal or the desire to get a mortgage. What again distinguishes Palmer Park is the fact that it overwhelmingly catered to the latter of these two contingents within rentership. In the 1920s, Briggs built apartments for people who could afford luxury, no doubt recognizing that lower-income renters had a host of options: in either older apartment buildings closer to the downtown; or in large homes in declining old neighborhoods like Brush Park, where Depression-era buyers converted stately brick Victorian mansions into multifamily rental operations when the city’s elite clearly sought the greener pastures five and six miles away from downtown. (Eighty years later, the vast majority of Brush Park’s old estates are no longer standing. But in 1925, when Seven Mile Road was the hinterlands, Brush Park was the emerging inner city.)

The Palmer Park Apartment Building Historic District was and always has been a niche market. People voluntarily choosing to spend their considerable wages on a luxury rental were outliers, back in the city’s gilded age and continuing through its precipitous decline. The neighborhood initially might have attracted young upstarts in the auto industry—those who hadn’t yet settled and started families but already had high enough incomes to afford a certain degree of opulence. By the 1960s, with the industry already beginning to contract, Palmer Park ostensibly changed again, becoming a hotbed for another niche clientele: Detroit’s gay and lesbian population. According to an extensive article from the Metro Times, this assembly of handsome buildings served as the epicenter of a still largely maligned LGBT community, at the dawn of activism, when their bars and bookstores were still largely clandestine. 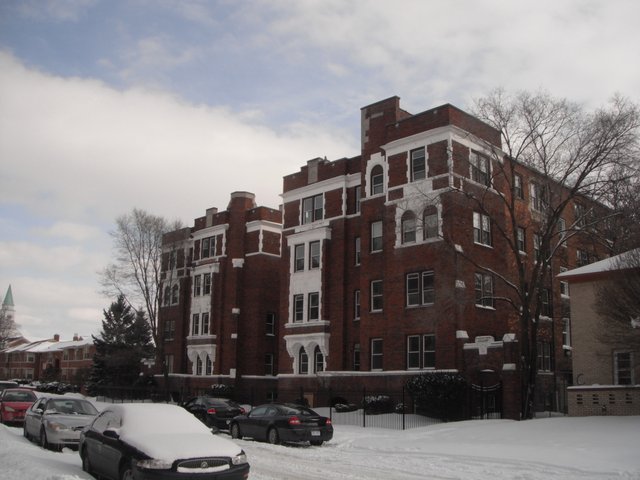 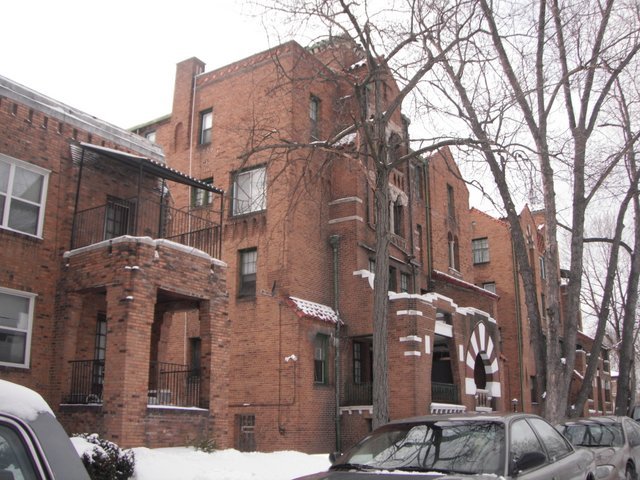 But not in Palmer Park, apparently. The high density and the diminished desirability of the city (by the 1960s, junior executives of The Big Three were moving out in the suburbs along with everyone else) resulted in the neighborhood attracting a population who might otherwise face barriers to housing, in an era when covenants could easily restrict certain classes of people with little chance of legal redress. The owners of these buildings, expensive to maintain yet not as attractive as they once had been, couldn’t be choosy, so they rented to a population that most Americans in 1975 treated as pariahs. As a result, Palmer Park became a sort of enclave for the open gay community of metro Detroit.

It didn’t last long. According to the Metro Times article, by the 1980s, crime had escalated to the point that even this neighborhood, less than two miles from the city’s northern edge, couldn’t retain a middle income tenancy. Most of the LGBT population moved northward, to the inner-ring suburb of Ferndale, which remains to this day the area in metro Detroit most associated with the gay and lesbian community. And Palmer Park became pockmarked with the same neglect and abandonment that pervaded most of the city. These days, the distinguished Art Deco buildings look better maintained than most multifamily (and single-family) structures in the city, but some are clearly completely unoccupied. 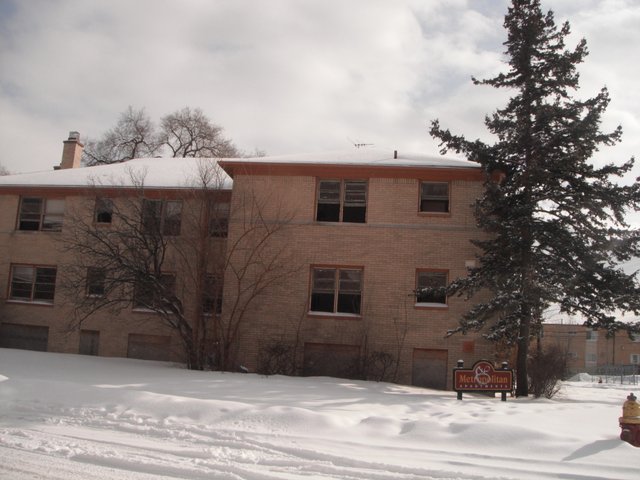 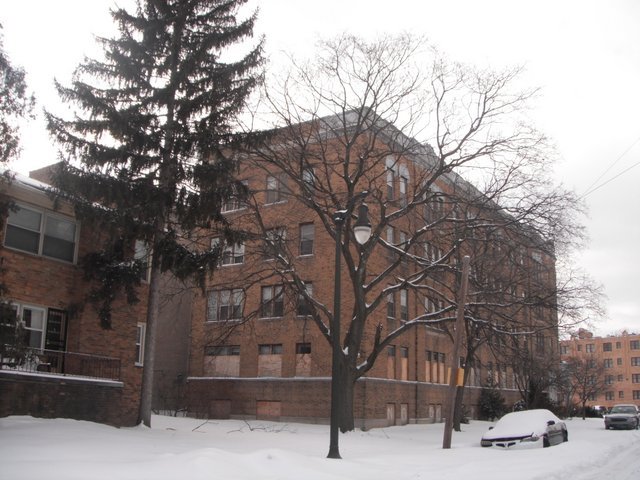 Other ambitious developers seem to be salvaging what they can, recognizing the high construction standards that allowed the neighborhood to weather the city’s profound decline reasonably well. Some of the most meretricious structures were under complete renovation during my visit. One particular building caught my attention during the relentless winter of 2014 (these pics come from March). 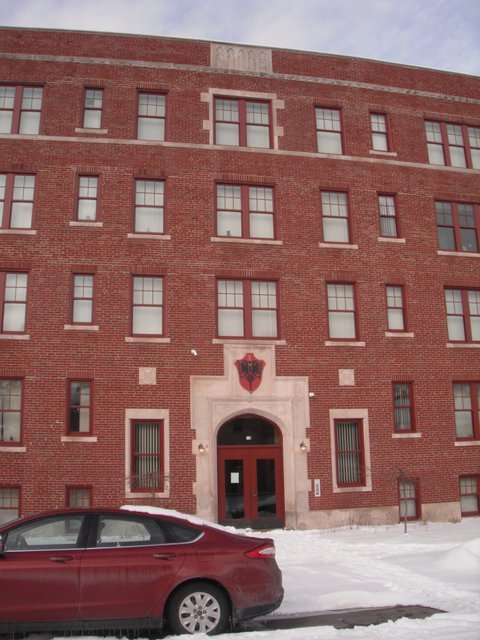 It may not be as opulent as some of its neighbors, but it’s clearly in good shape. The owner completely replaced the windows, giving them a modern trim that no doubt chagrins the historic preservationists. 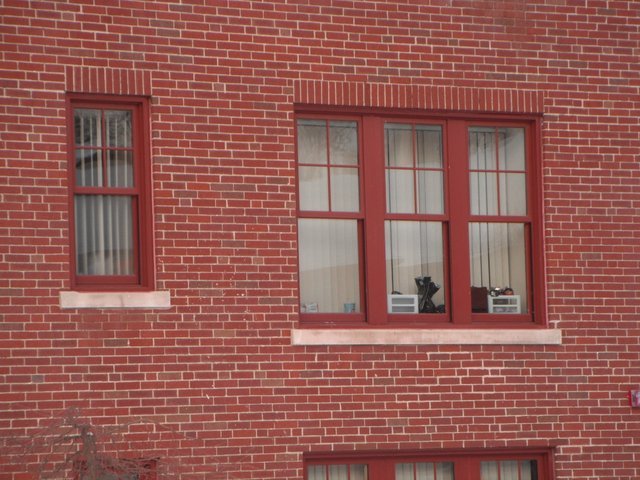 But new windows can retain heat, lower utility costs, and potentially attract tenants to an aging building who might otherwise pass it by. But the windows aren’t the only interesting feature to this little edifice. 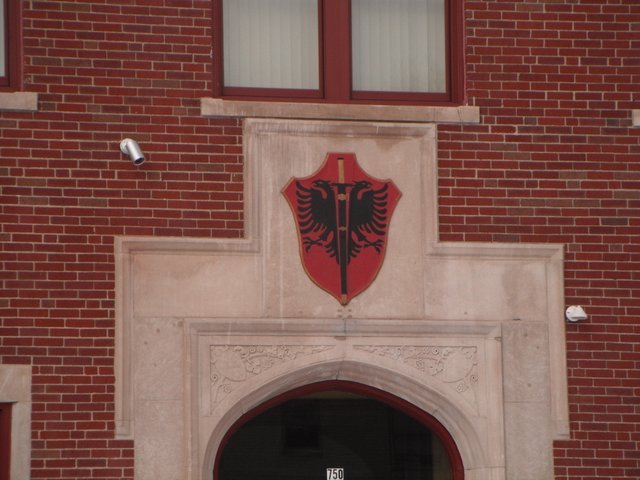 Above the doorway arch is a seal that only some may recognize: the flag of Albania.

Metro Detroit is home to a number of concentrated immigrant communities that are rare in most of the rest of the country, including certain Arab nationalities, Bangladesh, Pakistan, and Bosnia and Herzegovina. Though not a large presence, the Albanian community around the metro has mostly concentrated itself in the northeastern suburbs in and near Macomb County, evidenced most clearly by an Albanian Islamic Center in Harper Woods.  The Albanian presence in Detroit city seems pretty reticent, if it even survives beyond a few artistic gestures. I couldn’t begin to determine if the flag on the doorway is intended to hint that a large number of Albanians reside under this roof. Maybe it’s a flourish courtesy of the building’s Albanian owner, who added it after he or she refurbished the building. This owner might also have added the vaguely Asiatic decoration at the building’s cornice line. 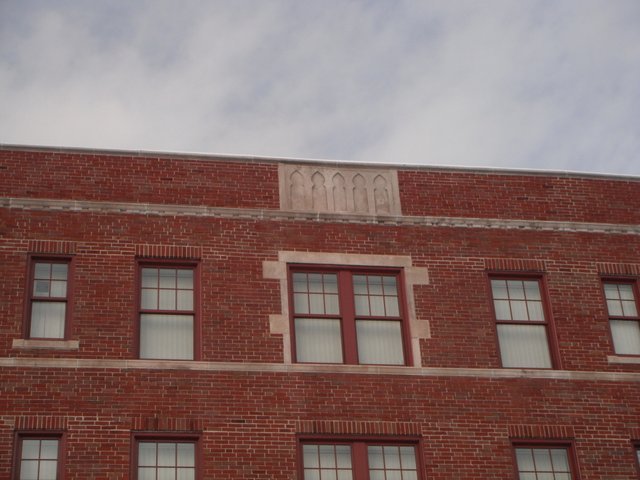 Then again, since Moorish Revival enjoyed a minor surge in popularity during the 1920s, when Palmer Park first started taking off, this succession of keyhole arches may very well date from the building’s construction.

It’s possible that the Albanian gesture is a red herring—that it doesn’t really mean anything—just a capricious tribute to this nation’s flag. But it could just as easily connote something much richer: that this unusual rental district has always attracted a socially marginal group that depends on the neighborhood’s odd clustering of rental units in order to affirm its toehold. In the 1930s, it was successful industrialists who, for whatever reason, shunned homeownership. In the 1970s, it was openly gay individuals who sought cohabiting arrangements that most landlords repudiated. By the 21st century, it was newly settled individuals from one of Europe’s historically poorest and most war-torn countries. With the bankrupt city’s future on persistently shaky footing, it’s hard to say what Palmer Park will look like in another thirty years—if the Art Deco marvels will endure for a new generation or the area will revert to another Motor City urban prairie. But while its buildings remain intact, its idiosyncratic character will undoubtedly continue to attract outsiders, either by choice or necessity.

2 thoughts on “Rental respites for refugees.”