From holy rollers to high rollers.

As much as certain media outlets are alerting the rise of the “unchurched” and religious “nones”, this country remains replete with religious institutions, for congregations of all denominations, faiths and sizes. The core expectations for what constitutes a house of worship are so minimal that their associated structures can be remarkably flexible in layout and design. It’s hard to think of any two churches (mosques, temples, synagogues, and so forth) that are exactly the same. Standardization is almost antithetical to religious growth, because—more often than not—the “new church” owes its existence to some breakaway element to the theology of a larger, older parent. Even if the new church’s schism from the old is completely amicable, it will still assert its own identity in order to sustain itself as unique. And one of the best ways to do so is to avoid carbon copying the original church’s physical appearance.

But not all church plantings are the product of theological differences. Sometimes they are part of a proselytizing effort that expands the geographic spread through a distant new location. Many fledgling churches emerge without the blessing of a larger, more established parent. Sometimes they begin in founder’s private residence, among a circle of a half dozen friends or followers. These less endowed churches lack the liquid assets necessary to select a distinctive design for a church, let alone the ideal location. For all the mainstream media’s coverage of the mammoth megachurch, its counterpart is proliferating quietly: virtually every city and town over 1,000 people has at least one storefront church.

I’ve covered the topic of storefront churches multiple times in the past, most visibly on a snow-filled day at the aging Carson Square Shopping Center but also when the church takes the form of an old department store in a mall. In both cases, it was either financially impractical or impossible for the church to construct a new building, so instead it became a tenant. And since these churches, with their limited operating times and even more inconsistent sources of revenue, often have a problem with cash flow, it should come as no surprise that they seek particularly low-cost leases. Thus, the retail operations that they choose are usually struggling as well—high vacancy, perhaps even somewhat blighted, sagging income levels in the neighborhoods nearby, and rarely able to attract the true “credit tenants” such as national chains. The property managers of these floundering shopping centers need occupancy; the churches need a more viable space to conduct worship than a living room. It’s a logical pairing.

So it should come as no surprise to spot a church on a more traditional, pedestrian oriented storefront, such as this one along the main street in Stroudsburg, Pennsylvania. 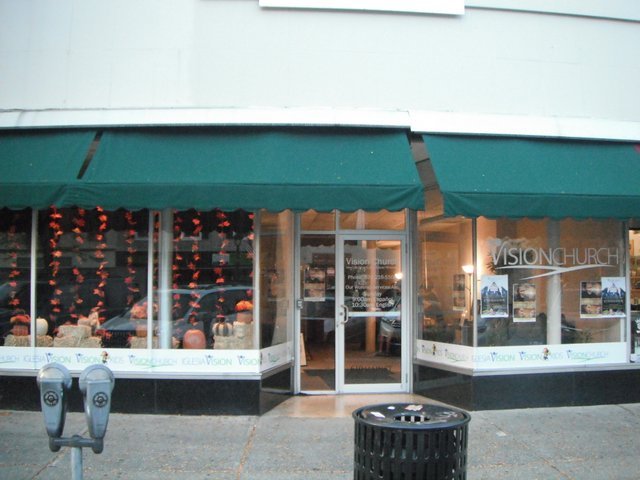 VisionChurch seems to have invested a bit in its appearance to passers-by, particularly compared to the aforementioned Southside Baptist church at Carson Square, which didn’t even display a sign visible from the road and whose interior could only be described as austere.    VisionChurch, by contrast, has a widely noticeable sign, which undoubtedly cost more than anyone would expect. 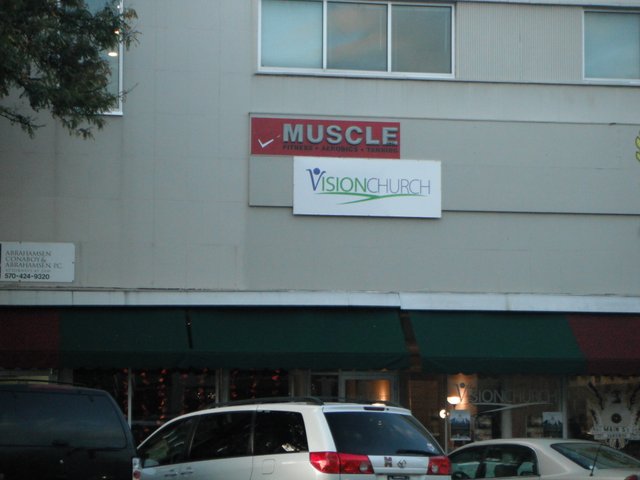 It also layers the window with a border and furnishes the interior display space with seasonal decorations. 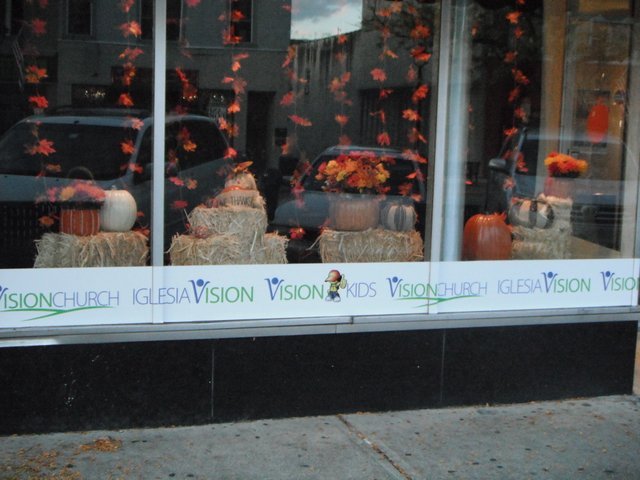 While hardly indicative that this church has a towering budget, it certainly doesn’t convey the hard-scrabble operations of many storefront ministries in comparably small spaces. Here’s the proof: it has its own website.

It more ways than one, VisionChurch defies the commonly held stereotypes of storefront churches. Certainly it seems to be doing all it can to avoid looking low-rent. But the location choice has much to do with it: Stroudsburg’s Main Street is not exactly struggling. 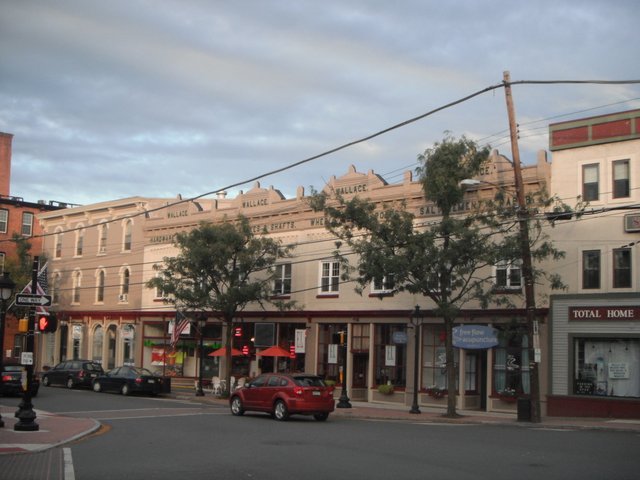 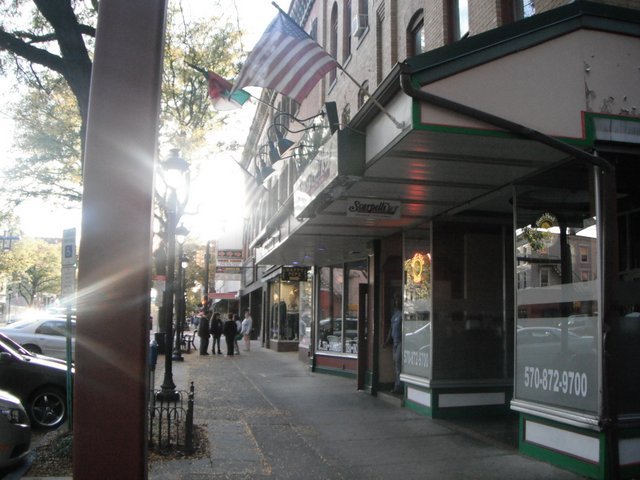 This municipality, together with its immediate neighbor East Stroudsburg, forms an urbanized area of at least 20,000 people—probably the most densely populated area in Pennsylvania’s Pocono Mountains Region, north of Philadelphia/Allentown and west of New York City. Bolstered by nature tourism, a steadily growing role as a bedroom community for New York City commuters, and the presence of East Stroudsburg University just a mile away (in the adjacent borough), this little downtown appears reasonably active and lively, at least when school’s in session and the students are around. 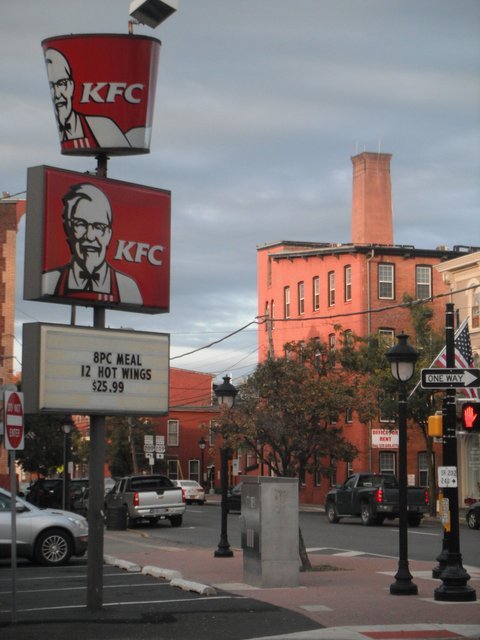 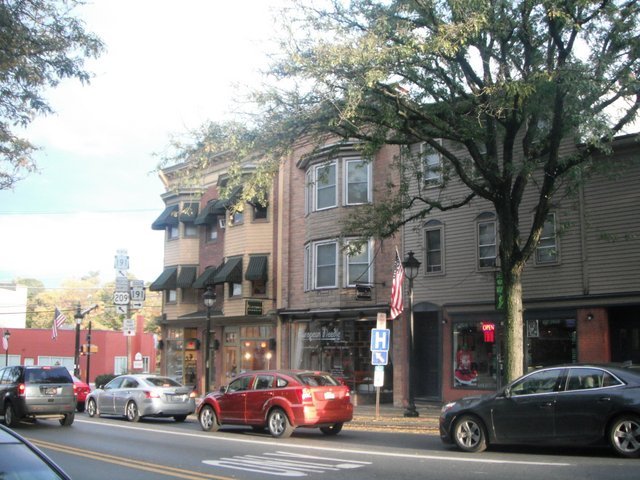 Okay, so it isn’t Rodeo Drive. Nor is it quite on par with the posh downtowns of New Hope, Doylestown or Newtown in Bucks County to the south. In fact, a few telltale indicators of blight suggest that it is recovering from a period when it was in terrible shape. (And it might be in another minor doldrum here in 2014: the Poconos region in general suffered heavily with foreclosures after the Great Recession, and the borough’s population declined slightly according to the 2010 census, after two decades of growth.)

Regardless of the long-term forecast for the greater East Stroudsburg, PA Metropolitan Statistical Area, the occupancy rate for Main Street seems high enough to foster a mild dining/drinking scene, supported heavily by the large student population. Which, in turn, makes the presence of VisionChurch that much stranger. 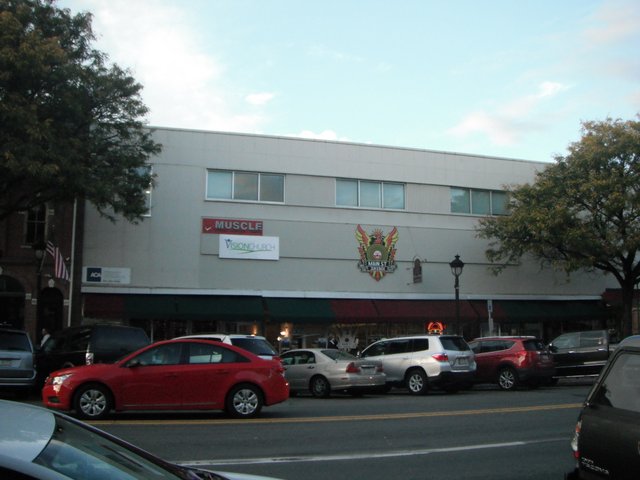 Storefront churches can easily serve as tenants in strip malls, outparcels, former department stores, or a space on a fully pedestrian-scaled main street. The unifying characteristic is that they are in nearly always in poor economic health, which is why churches make such a good fit. Retail spaces that are flourish command much higher rents than a 30-member church is likely able to afford, and successful retail spaces will rarely ever seek a church because they have such limited hours, and their peak operational time is typically Sunday mornings—a time of the week when most other retail traffic is non-existent. So why did VisionChurch choose a prominent space on a generally healthy street, when the rents are so high?

I suspect that two conditions help to explain this broad pairing. The characteristics of the church itself—its sign, its polished website, the interior—suggest that it is a bit more established and financially secure than the typical storefront church. Both the website and the window signage are in both English and Spanish, indicating that the congregation may be more mixed-ethnicity than the typical church (which remains in keeping with Martin Luther King’s often appropriated quote: that Sunday morning at 11 a.m. is “the most segregated hour in Christian America”). By choosing Main Street Stroudsburg, the pastors at VisionChurch may have made a savvy outreach strategy: they recognize that a dying strip mall is nowhere near as visible, and thus far less likely to attract passers-by, even if the rent may be dirt cheap. I can say with almost full confidence that VisionChurch fits somewhere in the non-denominational Evangelical movement, not only from the absence of any familiar title associated primarily with Mainline Protestantism (Lutheran, Methodist, Presbyterian) but from the doctrinal statements articulated on the website: sola fide (the doctrine of justification by faith alone—not good works) is far more of a prevalent tenet in conservative Protestant churches than in Catholic or Mainline Protestant. The elegantly contemporary signage, along with that simple name (VisionChurch) is also a far more popular semiotic gesture among Evangelicals, whose emphasis on evangelizing manifests itself through smart, accessible branding that stands in tacit opposition to the stuffy archaisms associated with the RCC or those old limestone Protestant Churches, with their elaborate names evoking the saints. VisionChurch Pastor Emilio Quinteros and his wife Marisela probably deduced that they are far more likely to win adherents and souls through a high profile yet conventional location, even if the leasing costs are a bit steep.

Then again, it could be that VisionChurch is still getting a good deal on the lease, which touches on the other primary condition at work here: that retail in general is quietly imploding, even among the most fashionable and attractive old commercial main streets. An ever growing number of consumers are using the internet to buy their goods, skimming away a great deal of foot traffic that might have previously patronized both main streets and strip malls. Rest assured that the more niche specific brands—the “category killers”—are feeling the pinch: Best Buy, Barnes and Noble, Bed Bath and Beyond. Borders Books bit the dust a few years ago because it failed to compete with online book shopping. Most of the surviving office supply stores (Staples, Office Depot) depend on their online sales, while they’re perpetually empty retail buildings are essentially cavernous furniture showrooms. This sea change in how we shop absolutely trickles down to the smaller retail spaces, like Stroudsburg’s Main Street. Service-oriented businesses—restaurants, bars, or the Muscle Inc gym that shares a building with Vision Church (indicated by the pairing of the two storefront signs)—are all far more likely to prevail than the clothing, beauty supply or home décor shops that a revitalizing commercial corridor might have sought twenty years ago. 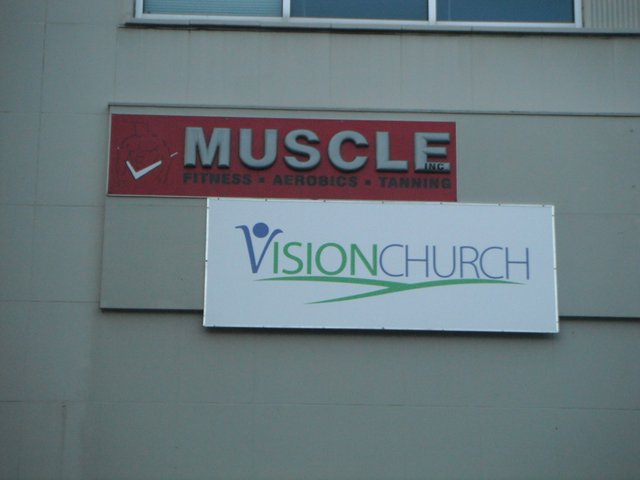 The result? Even a seemingly pretty successful main street like Stroudsburg’s still has to work overtime to attract the tenants, which includes in this case storefront churches—an occupant normally only prevalent in the retail spaces that are unambiguously struggling.

Neither VisionChurch or Muscle Inc are the sort of typical main street tenants that can foster synergistic foot traffic that helps the entire corridor. People going to these two uses aren’t there to shop, and will probably leave Main Street after a workout or worship. But they do keep Main Street Stroudsburg’s vacancy rate down, and in this era—just as was the case in previous decades—an unconventional tenant is still better than none at all. Will the storefront church proliferate across retail spaces of all levels of economic health, or will it recede, as more Americans identify as religious “none”? Only time will tell, leaving the future prospects for the American Main Street uncertain, just as they’ve been for the last sixty years.

PrevBreaking the rules to enforce them.
Fencing in the human will.Next