Shipwreck Island without the water.

At long last, a significant number of older urban centers in the country seem to be recognizing that it’s a good idea to build infrastructure that accommodates pedestrians. While we are far from perfecting the design of crosswalks or vehicular turn lanes, the trajectory clearly manifests improvement with each passing year. Finally.

But even the best efforts can crash and burn. After assessing the damage we inflicted upon our commercial centers in the 1960s and 70s by redesigning infrastructure that catered to cars, it’s easy to see that not every public-works patch-up gets it right; sometimes the treatment is worse than the disease. This intersection in downtown Asbury Park, New Jersey, provides a perfect example: 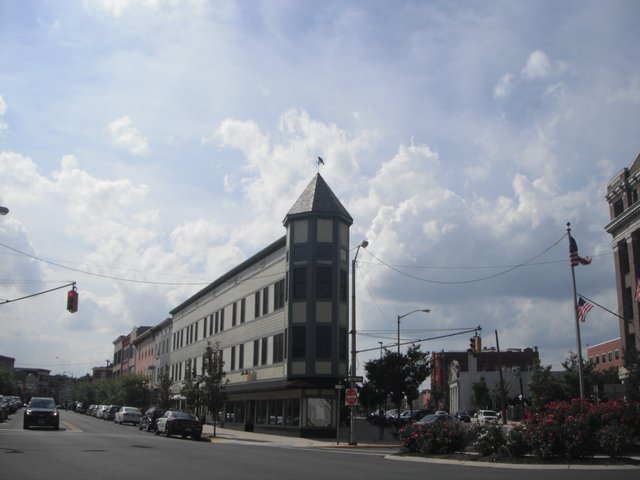 Notice the flowering shrubs to the right of the photo. It’s not just roadside landscaping. Here’s another angle. 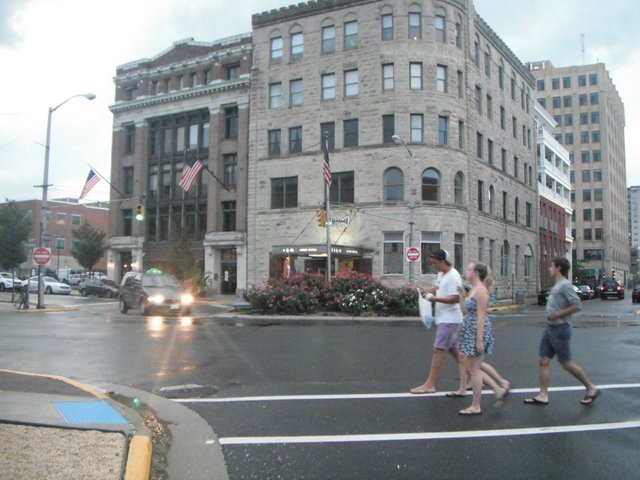 It’s a decorative feature that endows one of the busiest intersections in downtown Asbury Park with a bit more importance, albeit still fairly understated. It’s also a traffic control device, helping to manage vehicles that seek to navigate a turn on this intersection, whose oblique angles become more clearly visible through an overhead map view. 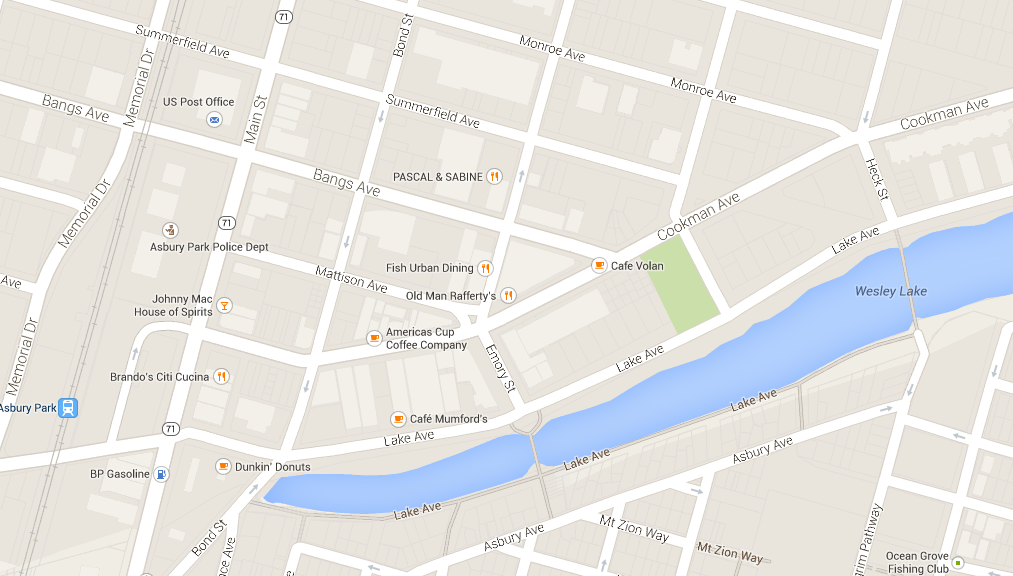 The small triangle, guiding the traffic at the intersection of Emory Street, Mattison Avenue, and Cookman Avenue, correlates to the photos above. The map clearly reveals a rigid grid pattern, if it weren’t for the anomalous Cookman Avenue, which instead parallels Wesley Lake—and, incidentially, serves as the de facto main street of Asbury Park. But the commercial artery of this steadily gentrifying small oceanfront city is the road that disrupts those right angles, and evidently the Public Works Department decided at some point that this particular three-way convergence needed some sort of intervention. Thus, a triangle. 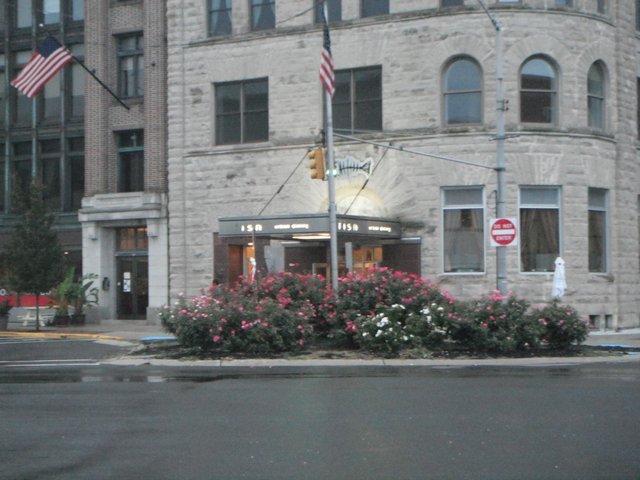 But there’s more to the triangle than that. A sidewalk carves a path through the landscaping, visible at the point where Mattison Avenue splays into Cookman and Emory. 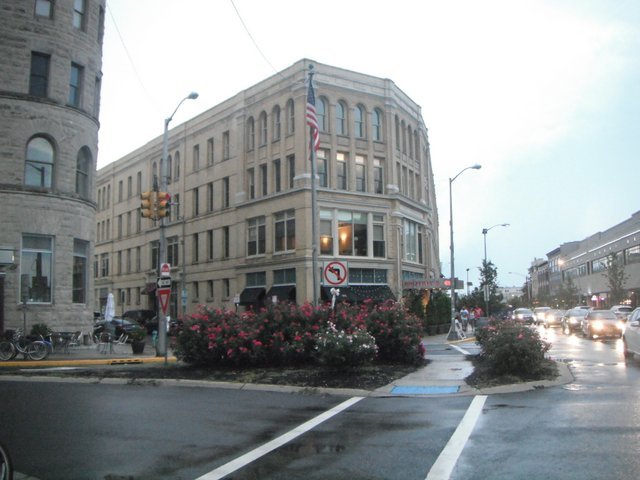 The triangle is a pedestrian island, a deliberate refuge from traffic (so to speak). The majority of what we label “pedestrian islands” serve as enhanced medians on a particularly wide, multi-lane arterial, providing a place for walkers to rest if the street is too broad to cross in one green light cycle. But they can also help to clarify crossings for pedestrians in places where an unconventional traffic pattern may cause confusion. I suspect this was the primary object of the Asbury Park triangle.

But does it work? I’m not confident it’s a roaring success. After all, the three-way intersection still has a stoplight, and the vehicular flow that the light manages still creates some serious problems. For example, when headed eastward on Mattison Avenue (the only option since it’s a one-way street), this is what the triangle looks like: 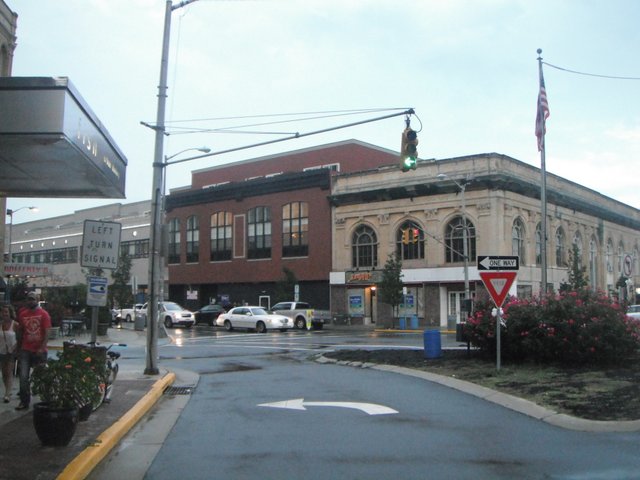 It’s hard to see, but the stoplight is shaped as a left-pointing arrow, supporting the notion that, when green, vehicles are free to make left turns onto the one-way, northbound section of Emory Street. This is fine and well, but a yield sign in the pedestrian island, to the right of this turn lane, implies otherwise. 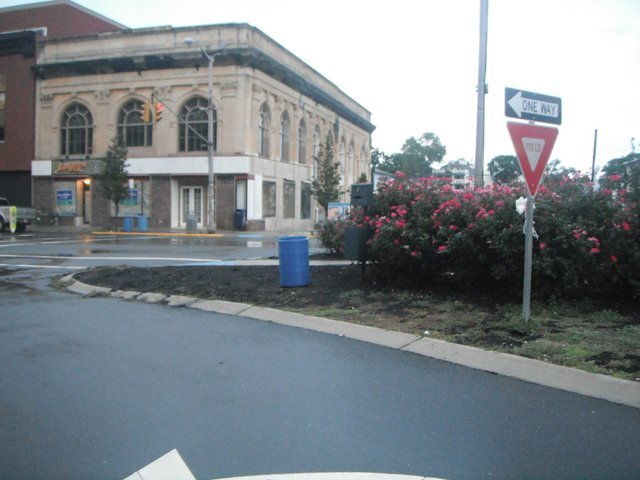 Ultimately, motorists approaching the turn lane on the left side of the pedestrian island have to yield to cars coming from the southern one-block segment of Emory Street (between Cookman Avenue and Lake Avenue), crossing Cookman and continuing northward. The map below indicates the friction: cars on Mattison Avenue turning left (indicated by the red arrows) and cars continuing on Emory Street (indicated by the purple arrows) both share a green light, but the red arrow travelers must yield to the purple. 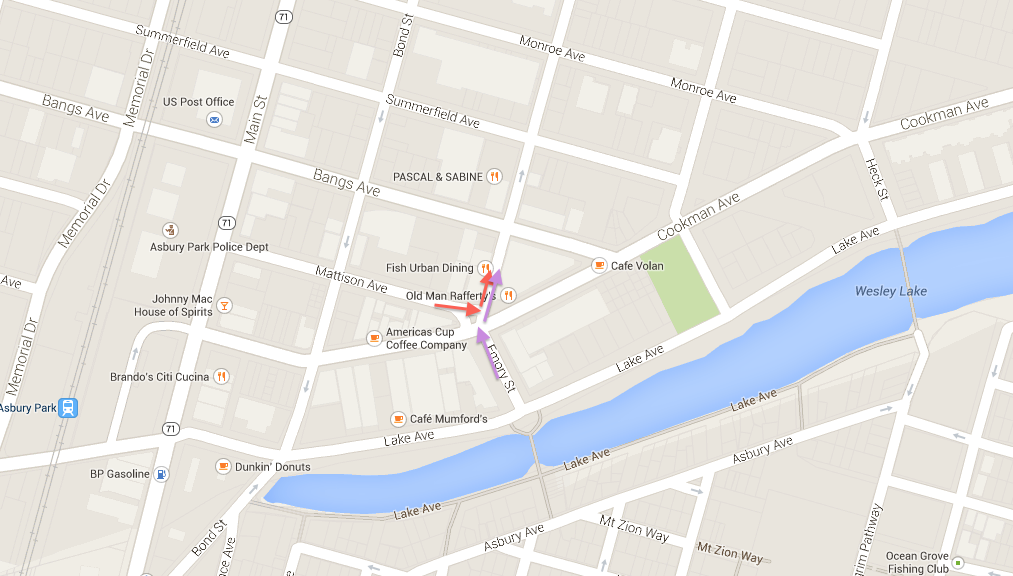 These two flows would probably operate in perfect harmony if it weren’t for the pedestrian island. When a driver is on Mattison Avenue at the red light, looking at the intersection to the right, this is what is visible from the window: 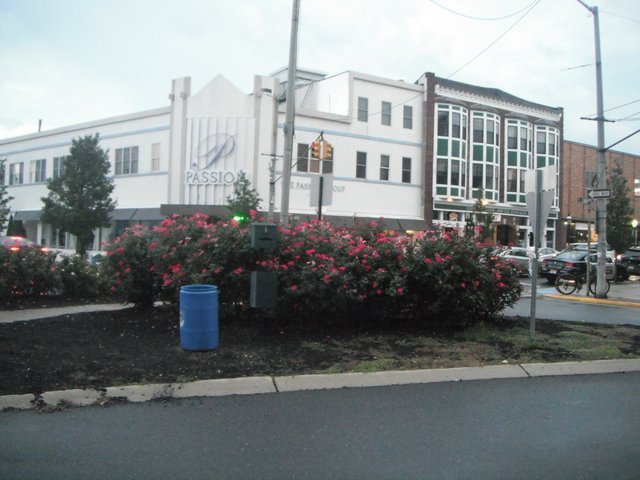 Only inching forward can a motorist see vehicles on Emory Street. 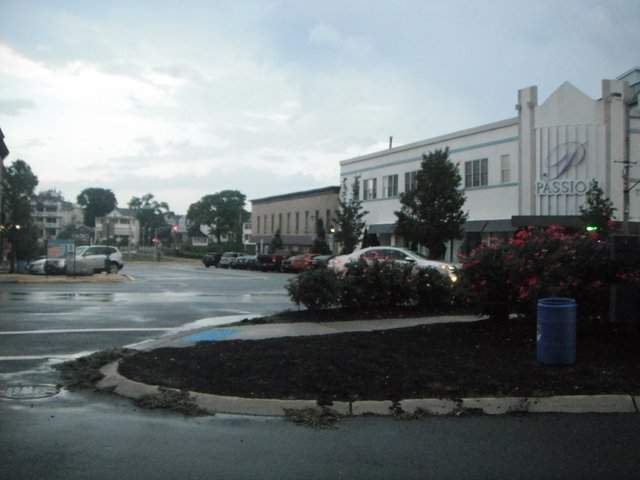 But by this point, the nose of a car is into the intersection.

I confess: I’m devoting this blog post to my own prejudices based on a particular experience when I nearly collided into another car barreling through the Cookman/Emory intersection while I was trying turn left from my place on Mattison. Neither of us could see one another. But I doubled back on this intersection multiple times afterward—obviously, I had to do so in order to build the photos for this blog—and it became clear that the triangular pedestrian island, the landscaping, and the traffic light pattern all work in perfect dysfunction to create a potentially very dangerous situation. I can’t believe for a minute that my experience was unique.

It’s hard to tell if the pedestrian island is a new addition to the Asbury Park streetscape. Aside from the pretty shrubbery, it’s no great shakes visually, which leads me to believe it has probably been there a very long time. As popular as pedestrian islands are in urban settings these days—usually constructed with the best of intentions to accommodate the foot traffic that forms the cornerstone of a healthy downtown—the new construction tends to be a bit fancier, with more monumental features, clearly articulated crosswalks, and stormwater management design in the form of bioswales or rain gardens. This triangle might be ancient; even the sidewalk feature that makes it a legitimate pedestrian island may date far before these things became trendy. Regardless, in its current condition it only elicits confusion for drivers, and while most urban advocates are comfortable with inconveniencing motorists if it means an amenity for pedestrians, it’s hard to argue that confusion is a felicitous result for anyone. After all, if the drivers are unclear how to react, how is that going to make things safer for pedestrians who are always at their mercy?   My guess is a little tweaking is all this intersection needs, but in its current state, it doesn’t pass a Pareto efficiency test. The fact that it can become Pareto efficient—making at least one person better off without making another worse off—shows that we can still extol its good intentions, while candidly nudging it to a higher standard. Both cars and walkers deserve it. And, smacked by Superstorm Sandy a few seasons ago, so does Asbury Park.

PrevBiodiversity for the home turf.
Can the pipes prevail? Part I.Next

One thought on “Shipwreck Island without the water.”