Dressing the wounds with paint (a sequel).

In a nation where the supply of potential retail space is so excessive that it hobbles the commercial landscape it intends to serve, a vacant storefront often remains vacant for a very long time. Only in the healthiest, most sought-after retail districts does the leasable space absorb quickly. In larger structures with the capacity for multiple tenants, maintaining 100% occupancy for even a year is often a pipe dream, and retail developers have to lower the bar, adjusting their assumed vacancy rates to as high as 20% in their pro formas—meaning that what should be a dependable source of revenue can only function at 80% of its full potential.

Not surprisingly, in a culture where tenants typically get to call the shots, certain businesses make more attractive tenants than others. National chains tend to be more stable than mom-and-pop establishments, and however much they detract from a retail district’s perceived uniqueness, they are often willing to pay top dollar to lease the most visible, lucrative space. So a large commercial property filled with name brands is probably going to retain high occupancy levels longer than one that lacks them. Banks, whether national or regional in scope, also make coveted tenants, not only because of their reliability in upholding their leasing agreement, but because of their dependence on particularly sophisticated security measures, which can deflect some risk from the property managers and inadvertently can improve perceptions of safety for all of the bank’s neighbors. Lastly, new franchise concepts have emerged as national credit tenants, in many regards. The National Retail Tenants Association reports that, after the Great Recession, many business executives succumbed to the downsizing and responded by purchasing franchises, or by making the credible claim to start new franchise concepts. Obviously, not all have been successful—I’ve already observed how tough it is to find a Quizno’s these days, even though they were surging as recently as 2007—but franchises still show greater staying power and capacity to generate foot traffic than most equivalent mom-and-pops. Customers are fickle, and the proliferating Jimmy John’s or Five Guys Burgers may implode in five years, or tomorrow.

One retail concept that isn’t likely to make a comeback is the video store. Ten years ago, we could find about one every square mile, in any part of the country with enough population density to call itself a town. Blockbuster Entertainment Inc.’s iconic blue and yellow logo asserted itself at shopping centers along any prominent intersection, sometimes nestled within the larger strip of buildings—often as a freestanding outparcel. But online retailer Netflix and grocery store vendor Redbox made bricks-and-mortar video rentals seem like an unnecessary additional step in accessing the latest movie titles. As a result, Blockbuster filed Chapter 11 in 2010; Dish Network bought out the company in 2011, and by 2013, after whittling down to the most profitable stores, Dish announced that it would be liquidating the chain completely. The corporation shuttered its 300 remaining stores in January of this year, revealing just how the mighty fall: a decade earlier, the company boasted over 9,000 locations.

The wraith-like Blockbuster website still shows about 50 locations operating as franchises in a handful of states. Beyond that, the brand is gone. Most other regional brands also succumbed to the one-two punch of Netbox and Redflix; the largest surviving chain is Family Video, with about 800 locations predominantly in the Midwest. It has survived by partnering with Marco’s Pizza in a shared-space, movie-and-pizza combo deal. In addition, the low-key chain has established a far more successful online presence than Blockbuster ever achieved, selling new and previously viewed items. Beyond Family Video, the only real surviving bricks-and-mortar establishments consist of mom-and-pops, often located in either small towns or close to universities.

The virtual demise of an entire retail submarket inevitably results in huge artillery of vacant real estate. Countless Blockbuster labelscars linger through suburbia, but the blockbuster icon’s key was the garish color combo; beyond that, its branding on exteriors was fairly subtle. Another major video store chain burnished its name a bit more powerfully. 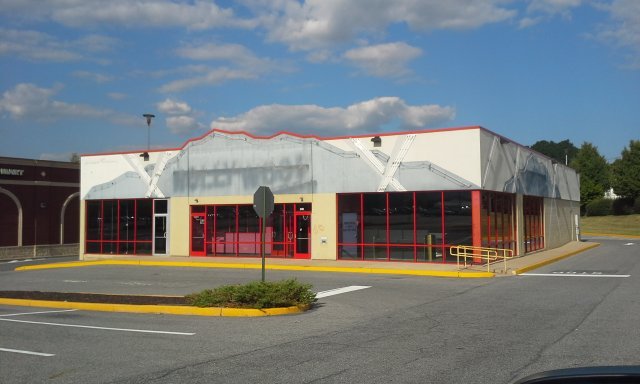 It’s an old remnant of the Hollywood Video chain, which at one point was Blockbuster’s biggest competitor, with stores numbering in the thousands. In 2005, Hollywood Video agreed to a buyout from Movie Gallery, a smaller chain, largely to deflect a hostile takeover attempt by Blockbuster. The new parent company retained the widely recognized Hollywood iconography. But Movie Gallery, too, met its demise by 2010.

So the scar below, taken from an old Hollywood Video in Pennsylvania, suggests that this building remains untouched since at least 2010. Its neighbor is an outparcel hosting a drug store, another retail sector that has faced significant turbulence in recent years, though a few national brands—CVS, Walgreens and Rite Aid seen below—seem to have prevailed amidst numerous now-defunct regional competitors. 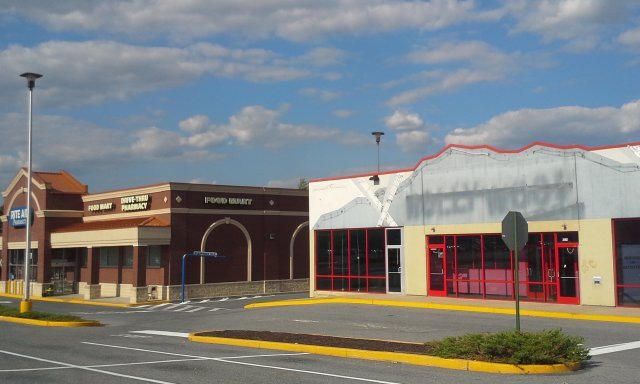 But, even in its last years under the Movie Gallery management, Hollywood Video retained a far more consistent look than most video store chains. This probably worked well for the company when it was thriving, but the post mortem is also more potent than Blockbuster, which deployed signage and (sometimes) awnings, both of which were easier to remove than a silhouette of a mountain painted on the wall. Now those angled spotlights only help to recall a mighty failure. And, since virtually all of these video stores sit on aging retail real estate—and over 10 years qualifies as relatively old in our absurdly overbuild retail environment–scores of painted storefronts linger, unleased outparcels in strip malls whose vacancy rates often creep northward of 50%.

Every now and then, though, an entrepreneur sees opportunity in defeat. Only a few miles away from the previous photos, in the same metropolitan area, a new business has emerged. 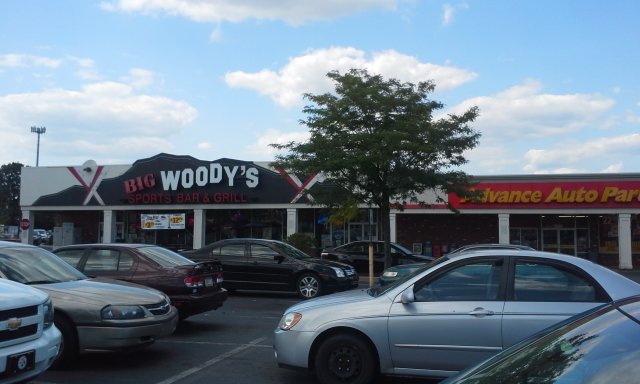 Big Woody’s Sports Bar and Grill might not strike the unacquainted viewer as anything remarkable, but viewed in the context of the previous photos, it’s obvious where Big Woody got his idea. Not only did he use the look of a Hollywood Video frontage as his inspiration, he directly appropriated it. Compare it to the vacant labelscar from before; the mountain contour is the same, and so are the position and angles of the spotlights. 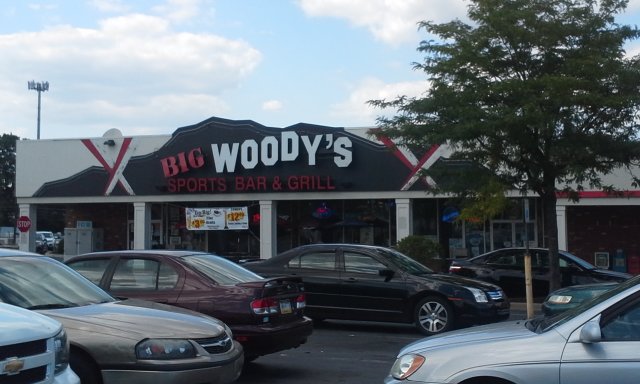 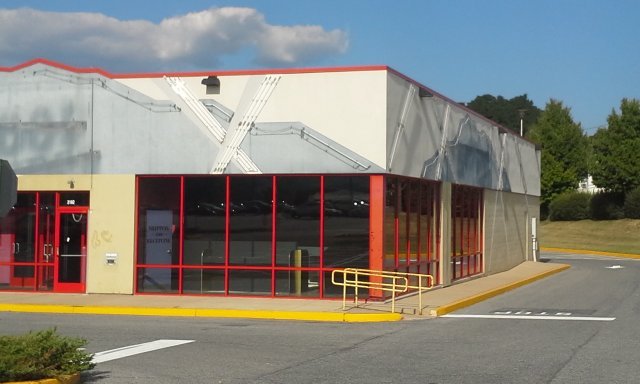 And why not? It’s not like anyone at Hollywood Video is around to litigate. Odds are good that Big Woody’s directly succeeded an old Hollywood Video at this location; nothing else leased the space between the two. Woody may have seen the aging logo (if the “Hollywood” sign remained mounted after the business closed) as a selling point in choosing this particular location. And if Woody’s name is actually Mike, Floyd or Sebastian?   Then just call the place “Woody” and save a fortune on custom signage.

This clever repurposing of one old video store is a drop in the bucket, since we’re all aware of many others that remain untenanted. Video stores were fairly adaptable; both the national chains and the mom-and-pops could choose to lease in freestanding structures or outparcels in a bigger shopping center, a single space in a strip mall, or a highly urbanized parcel with no off-street parking. The various retail layouts were fungible. The real challenge is that an entire commodity has become virtually obsolete, and, as online shopping continues to encroach on other purveyors, it’s probable that another consumer will soon follow suit and will fade into oblivion. Sadly, my bet is on the bookstores, which are particularly hard to come by in the era of e-readers and Amazon. The best survival strategy for retailers is to build a distinctive experience, where the act of shopping is more essential than the product itself. This is a tall order, and retail success may hinge upon a few features: a blend of goods that caters to a niche lifestyle, impeccable customer service, a particularly aesthetic environment—or a cleverly economical use of an old sign.

[NOTE: The reason I call this blog post “a sequel” at the top is because it’s the second to use this title.  I wrote the first post a couple years ago, which focused on “painting over” some much more sever evidence of blight and abandonment, and the examples came from vastly different locations: New Jersey (disinvestment) and Mississippi (a hurricane).  Check out that blog post as well, and feel free to comment.]

13 thoughts on “Dressing the wounds with paint (a sequel).”