When public spaces reflect modern life—by not reflecting anything at all.

Just over a month ago, the City of Indianapolis eagerly heralded the opening of a new Marsh grocery store downtown—the second within the Mile Square, which has in recent years exploded in apartment construction. The other, older store still loosely refers to itself under the name of O’Malia’s, a smaller Indianapolis shain bought out long ago by Marsh, though a handful of stores survive today under the O’Malia name. It’s only about six blocks away, on the edge of the Lockerbie Square neighborhood, in a converted old Sears and Roebuck Department Store building. The new Marsh occupies two floors and 43,000 square feet, as part of the five-story Axis mixed-use development near the Canal Walk. Although the Lockerbie Square O’Malia’s has long tried to satisfy the downtown grocery demand, it was much more in keeping with a neighborhood corner grocery store and never had the feel of a regional supermarket. It was satisfactory but hardly poised keep pace with the rapidly growing downtown population, as well as the increasingly spendy denizens of surrounding gentrifying neighborhoods. In short, central Indianapolis apparently had far greater income density that the spread of grocery stores would suggest, and it was underrepresented. 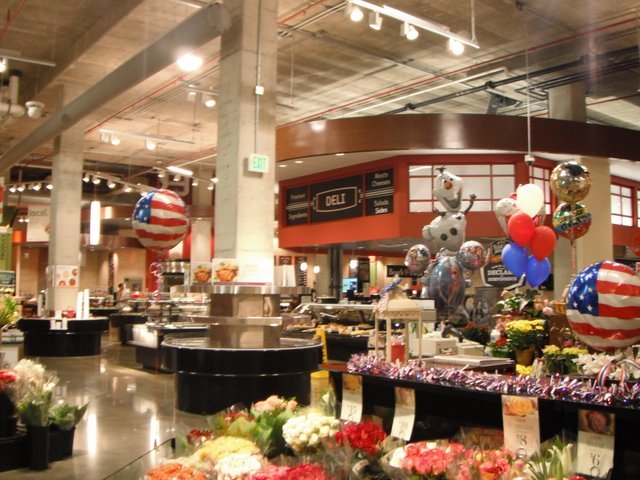 At the time of these photos, the facility had been open about six weeks, even though the apartments within the Axis building are not yet complete. I didn’t spend enough time roaming the aisles to get a sense of the quality of its offerings. But aesthetically, it almost definitely fills a demand niche. 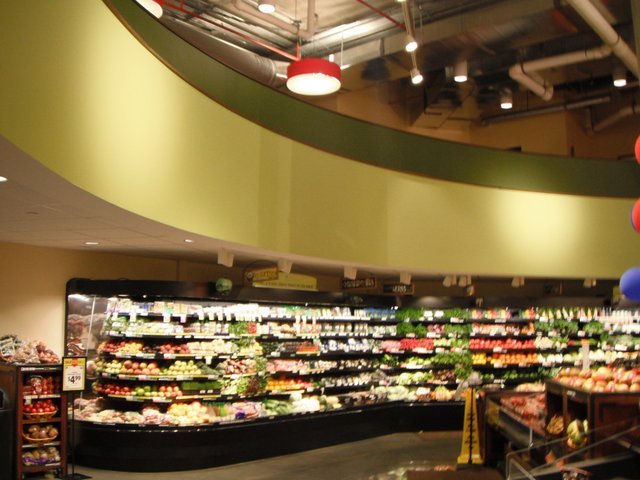 The Marsh’s interior is like slicing open an avocado, and maybe a tomato right next to it. It’s not a bad idea, and those shades of green (and the occasional bright red) certainly seem au courant enough.   Shiny and new is critical, because the Marsh Supermarkets brand has lagged considerably in recent years, though it was once the defining grocery store of the Indianapolis metro. Former CEO Don Marsh’s opulent life, rumors of mistresses and financial mismanagement escalated from the late 1990s until around 2006; the company inevitably dominated news headlines for all the wrong reasons, and its share of the local grocery market plunged below Kroger, Meijer and Walmart. Its nadir may have been the late 2006 purchase by Sun Capital, a private equity firm out of Florida. Whether the new owners successfully re-branded it or its image was strong enough to prevail on its own, Marsh has endured, though still at a shadow of its former self. It shuttered all of its Illinois locations, reigned in the majority of Ohio stores, discontinued its spin-off brands like LoBills (and most O’Malia’s) and announced another wave of closures at the beginning of this year.   Nonetheless, through the Marsh/O’Malia’s at Lockerbie and this new location, the declining chain dominates Indianapolis’ downtown grocery market, at least for the time being. And this latest is definitely trying to splash a new coat of paint on the company’s overall image. 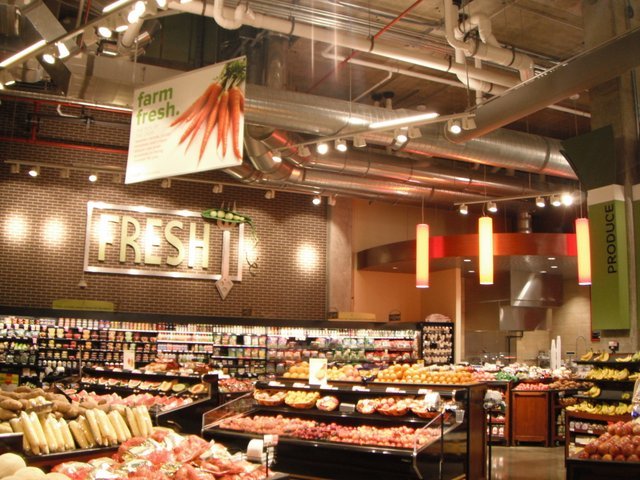 The aesthetics of grocery stores is something that I suspect resonates in our unconsciousness, far more than the blogosphere suggests. After all, supermarkets seem more resilient to the encroaching dominion of online shopping than a lot of other retail. Sure, some people feel confident ordering groceries online. (Indianapolis is home to a successful cybergrocer; Green B.E.A.N. Delivery has grown into a multi-state enterprise.) But most people still prefer choosing their own groceries, particularly when it comes to selecting the produce, meats, and baked goods firsthand. Thus, how a store looks can influence heavily how much people are willing to patronize a store. And this Marsh looks contemporary—a stark comparison to the surviving Marsh locations in less chic parts of town, most of which have interiors that evoke the 1970s when they were built. My suspicion is that renovating a grocery store is particularly capital intensive. And since they sell such a large quantity of non-durable goods, with new shipments arriving daily, it is nearly impossible to upgrade a supermarket and keep it operational for its customers. And when a location completely closes, even if just for a couple months, most of its clientele will find somewhere else…and they may never return. Thus, grocery store interiors across the country are particularly likely to remain frozen in time. Far more likely than, say, apparel stores, which also have to stay fresh to fight off that online competition.

From murals of the soon-to-change Indianapolis skyline to its subtle mezzanine that may go mostly unused, the new downtown Marsh in the Axis is as effective at conveying trendy urban living today is it is likely to look dated in fifteen years. What seems particularly telling—and most reflective of the importance of novelty in design—are those public restrooms. 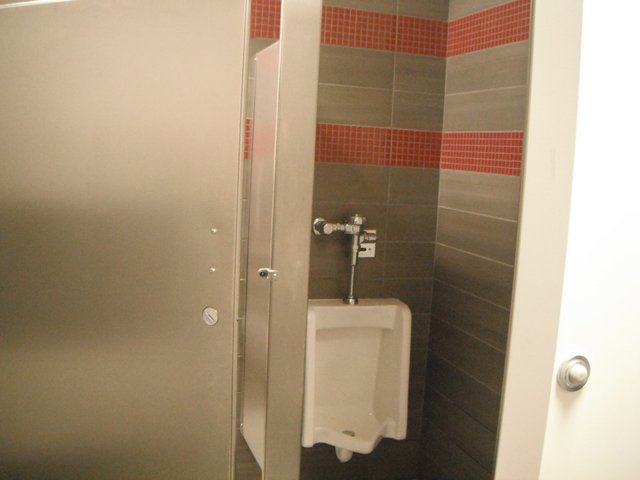 The swimming-pool-mosaic look has taken over in recent years, as popular a tactic in domestic kitchens as it is in gym locker rooms. It will seriously date itself by the year 2020, but doggone it, it looks good right now. These small, antiseptic restrooms in the new Marsh also reveal a certain feature that may not go out of style quite as soon. 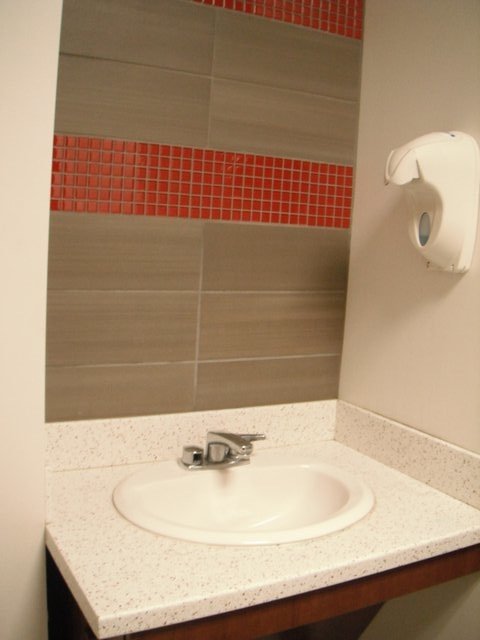 The restroom is more significant for what it lacks: a mirror above the sink. More and more businesses are opting to exclude mirrors from their restrooms altogether, much to the chagrin of the narcissists out there. Why? It could be because of a growing concern for privacy and the use of restrooms for unlawful voyeurism; after all, stories routinely hit the local news about cameras installed in public restrooms to spy on people. Mirrors only expand the potential lines of sight that peeping toms can exploit.

But the bigger problem with mirrors in public restrooms is, unfortunately, the vandals out there. This observation is probably axiomatic to anyone who has ever had to use a public restroom in a busy urban setting—which covers the vast majority of the adult population. Mirrors harbor graffiti and its companion, the scratchitti, in equal measure. In most restrooms, they’re right behind the interior stalls for suffering from various markings and tags. Most Marsh locations are much more suburban, whereas this one, occupying the street level of a building with zero setback, is far more likely to receive walk-in pedestrian traffic that exclusively uses the restroom. Thus, these restrooms will get more users, they’ll be harder to monitor, and the vandals will soon come out of the woodwork. 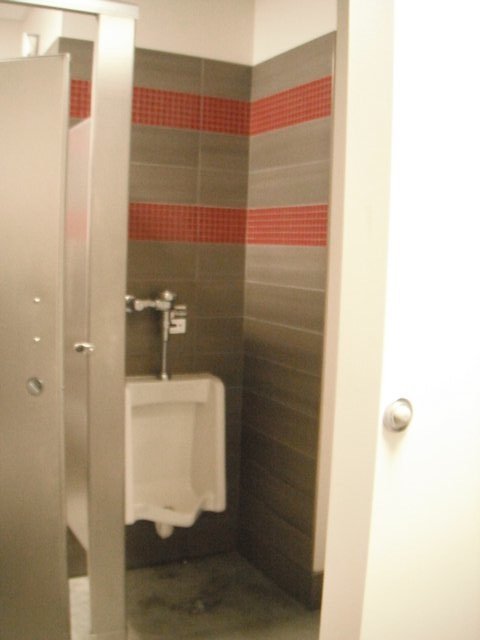 Or at least they would. Removing the mirror deprives them of a popular canvas—a small omission that inconveniences a few people while allowing one more safeguard against any chances of diminishing the store’s aesthetic integrity. Six weeks after its opening, the Indianapolis Marsh remains free of nail polish tags on its mosaic tiles or messages on the men’s room stalls. And the ambiance of a fresh bowl of guacamole pervades. Bon appétit.

PrevWhen a street is not a road.
Who knew that the City That Never Sleeps had a narcoleptic neighbor?Next