Who knew that the City That Never Sleeps had a narcoleptic neighbor?

As I prepare for some upcoming significant changes to my blog, I provide a sort of “placeholder” article as make the final modifications, which I will soon publicize. The placeholder motif extends to the content of this blog entry, where a window sign serves much the same purpose within its respective storefront. 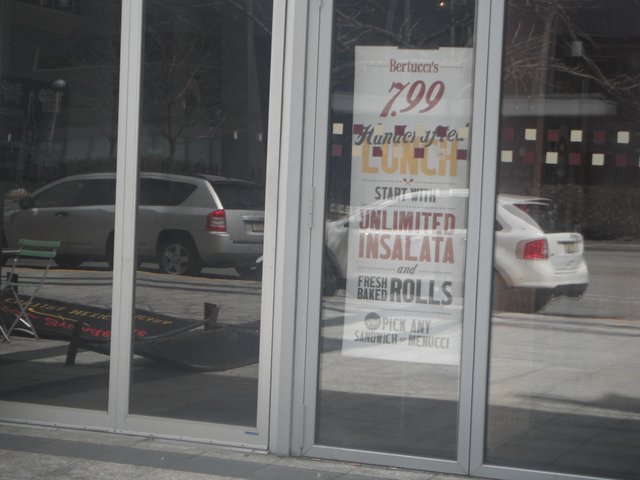 It’s simply announcing a lunch special. The restaurant itself? As indicated at the top of the sign, it’s Bertucci’s, an Italian chain common in the northeastern US. Though the restaurant’s target market is consistently suburban middle class, it seems as though Bertucci’s restaurants routinely occupy urban settings, in storefronts that directly face the street, rather than a sizable parking lot. Such is the case with this location. 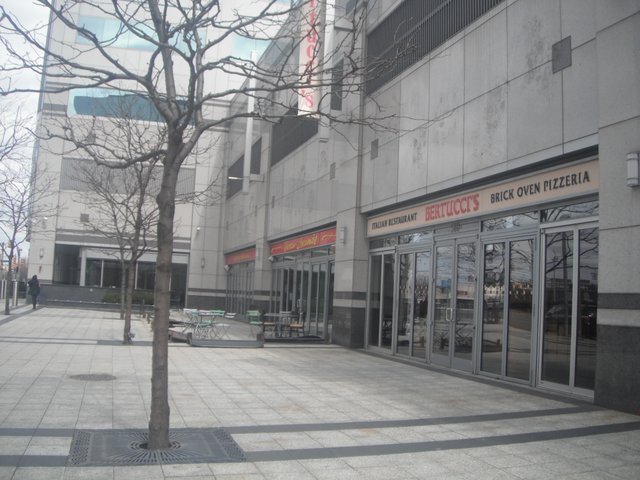 The sign itself isn’t really remarkable on its own terms. The only thing that distinguishes it is a condition that these photographs could not begin to capture: the day of the week. The advertisement for this lunch special is taking place on a Saturday morning, and it’s a good deal: good enough to suggest that this Bertucci’s is struggling to get people in the door on a quintessential weekend day without some real incentive.

Is there something wrong with this Bertucci’s? Probably not, at least in terms of management and menu—after all, it’s a chain, and if chains lose their consistency for too long, they croak. So why is this one deserted? It might have something to do with its surroundings. 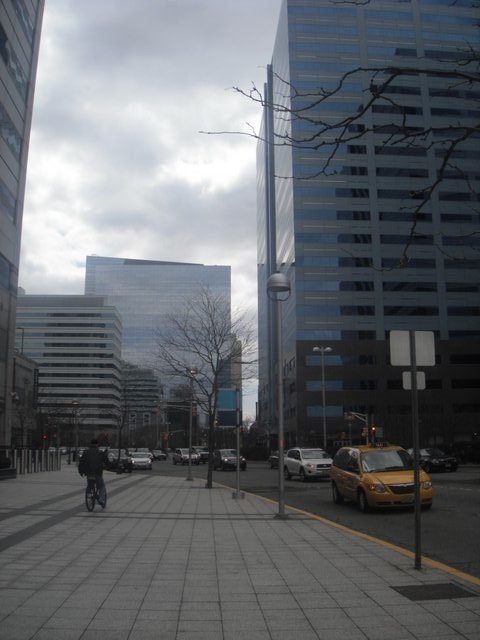 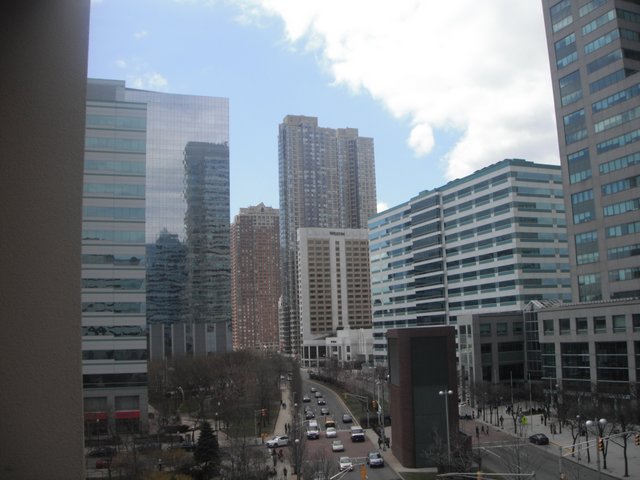 The translucent sheen of the contemporary buildings that flank this Bertucci’s comprises one of the busiest commercial centers in Jersey City, New Jersey—just a stone’s throw across the river from New York City. The Garden State’s second largest city (just behind Newark), it’s also old, settled as a garrisoned Dutch village in the middle of the 17th century. Yet you’d hardly be able to tell from looking at its coruscating skyscrapers in the Newport neighborhood, seen here in the photos, as well as Exchange Place, directly south of Newport along the waterfront. It all looks like it could have been built last week. 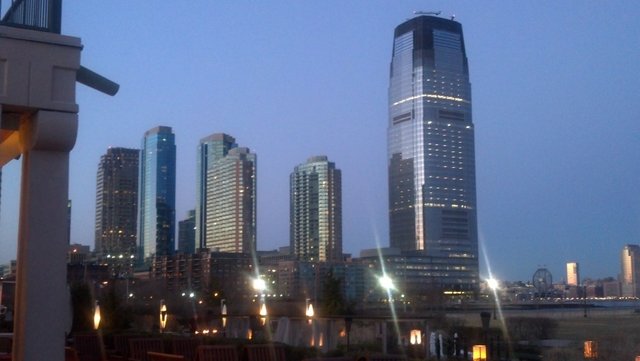 But the focus for this blog is the larger Newport neighborhood. 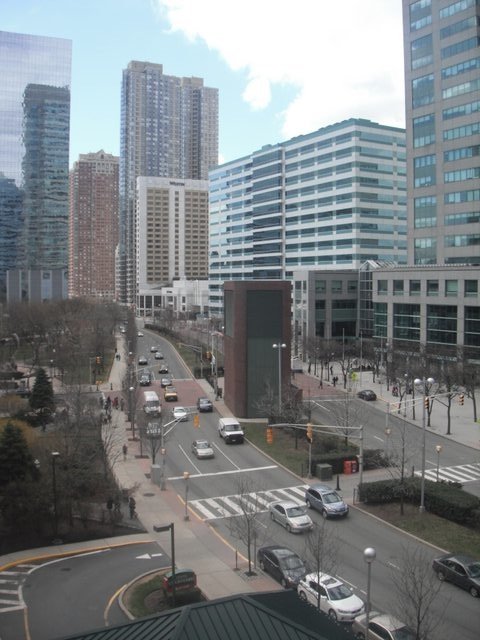 Constructed across 600 acres on the old Erie Lackawanna Railway yards, Newport helped galvanize Jersey’s City’s resurgence after its 1986 groundbreaking. Built as a master-planned, mixed-use community, the intent of its creator, Samuel J. LeFrak of The LeFrak Organization, was to intermingle high-rise residences with office, retail, and entertainment facilities. The site capitalizes on its pivotal location, adjacent to the Holland Tunnel (with direct vehicular access to Manhattan), as well as I-78 and, not so far away, the New Jersey Turnpike. Newport is also easily accessible by the Hudson-Bergen Light Rail, PATH, New Jersey Transit bus routes, and a ferry service across the Hudson River.

In other words, this is prime grade real estate. And, by most metrics, it has transformed into a successful locus of commerce, while over a dozen apartment towers house the neighborhood’s approximately 15,000 residents. By the 25th anniversary of Newport’s establishment, the high density community also boasted a marina, waterfront parks (one with a beach), two hotels, schools, and the Newport Centre Mall, a regional shopping center whose retail mix ostensibly caters to a broad and diverse socioeconomic base, spread across over 1.1 million square feet and three floors. This Simon-managed mall also sits squarely within Jersey City’s Urban Enterprise Zone, thereby halving the sales tax rate on goods (only 3.5% instead of 7%) and waiving it altogether for clothing, which no doubt has helped cushion it from the steep decline so many malls across the country have faced.

But for all its amenities, Newport does not seem to have yet mastered the art of fostering a vibrant streetscape. 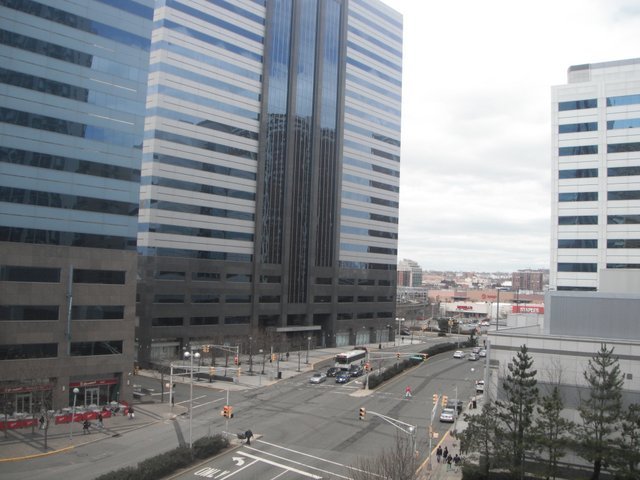 Sure, there are some people out. And more people might have been impelled to stroll Washington Boulevard if it weren’t for the blustery conditions on an otherwise mild April morning. But the fact remains that Newport has metamorphosed into a district with a high concentration of activity in an already active city (Jersey City’s density is well over 15,000 people per square mile, ranking it among the 30 most dense American municipalities). Nonetheless, this Bertucci’s, sitting right on the neighborhood’s main arterial has to devise special sales to attract visitors to a weekend lunch. This restaurant’s valiant effort to lure customers only serves to reaffirm what empirical evidence already suggests: that Newport is only lively from 8a to 6pm on Monday for Friday. Then it hibernates.

The two sons of the late developer Samuel LeFrak strive to continue to his legacy through the family business, but they also hope to improve upon some of the past architectural missteps. Visual evidence confirms that, aside from the spectacular views of Manhattan from the waterfront, Newport is generally not a terribly desirable setting for people to get out and walk around. It doesn’t help that ungainly, austere parking garages sit between the occasional storefronts. 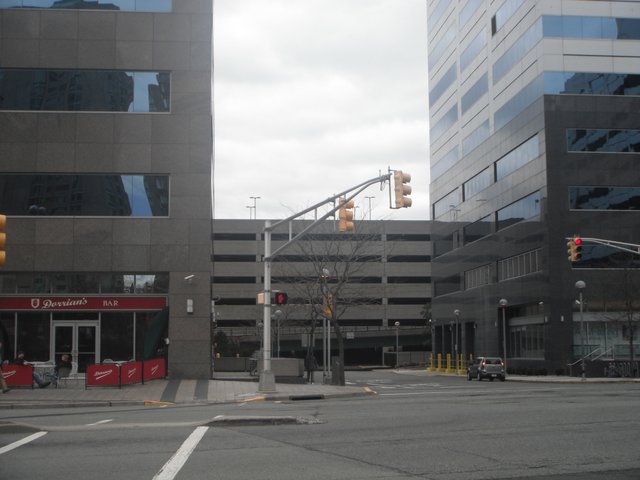 Or, for that matter, that one of the primary hotels fronting Washington Boulevard includes a big enough setback to allow for considerable vehicle loading/unloading, as well as some spaces for off street parking. 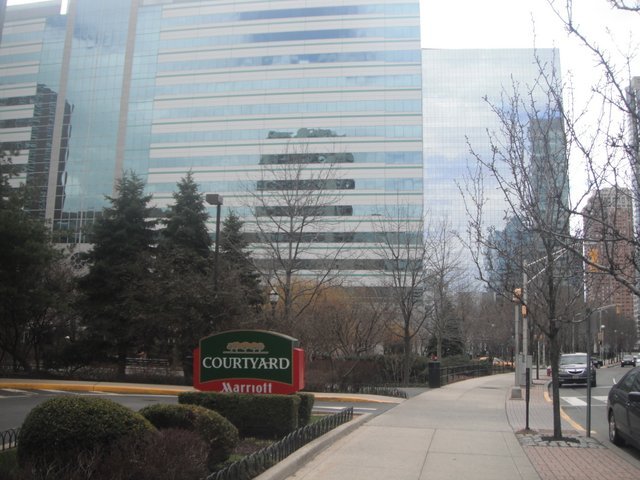 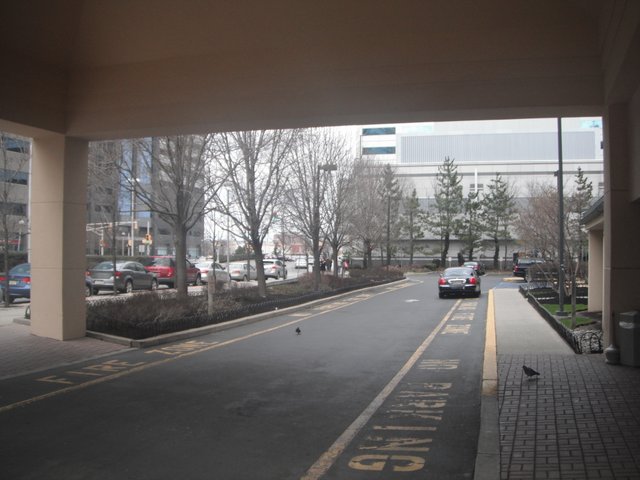 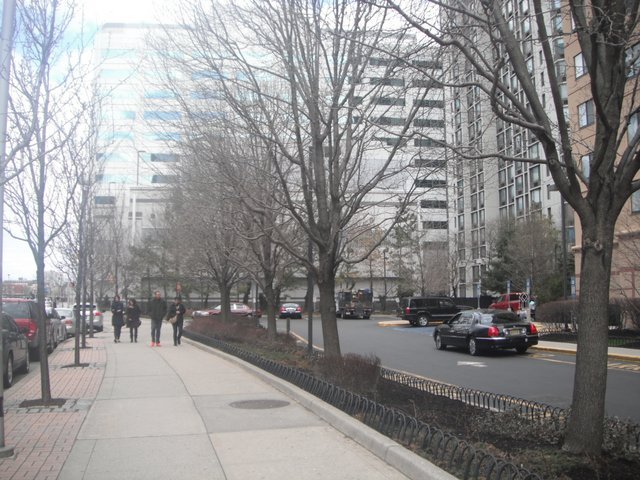 Obviously, the majority of American hotels—including those in our city centers—include these exact same driver-friendly features. But the vast majority of American cities cannot boast the sort of multi-modal or mass transit access of Jersey City. Such a configuration would be virtually unthinkable in Manhattan, and, to this day, even many smaller American cities—often with significantly weaker transit systems—would still include zoning stipulations that vociferously discourage off-street parking lots for hotels within the central business district.

Perhaps, however, the biggest hindrance to Newport ever succeeding as a round-the-clock active urban district is the land use just two blocks away from this photo series. 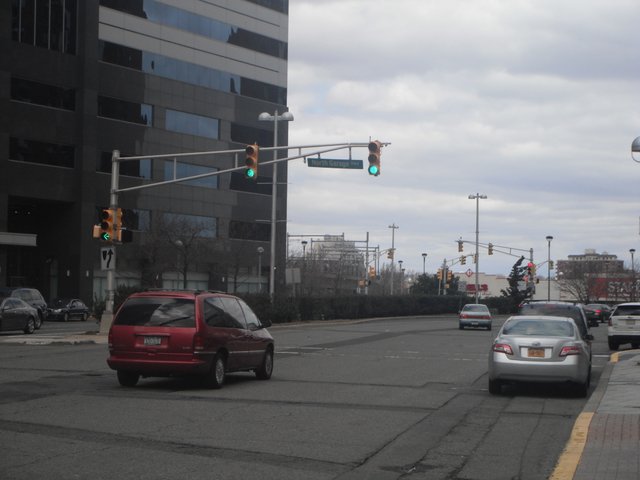 As Washington Boulevard continues northward of Newport Parkway (the road that rests directly above the Holland Tunnel to Manhattan), the vista changes completely. 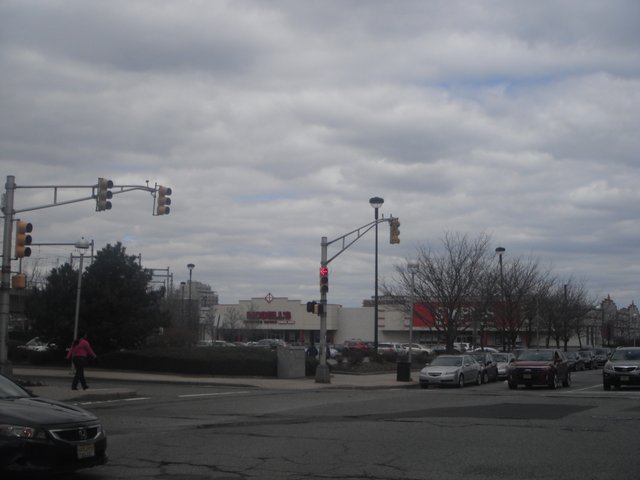 Gone are the highrises, replaced by a series of suburban-oriented big box stores (Target, Staples, Best Buy) and replete with off-street parking lots. The map below shows that this area in Jersey City offers a host of shopping options that one would just as easily expect to see in an automobile-oriented suburb. 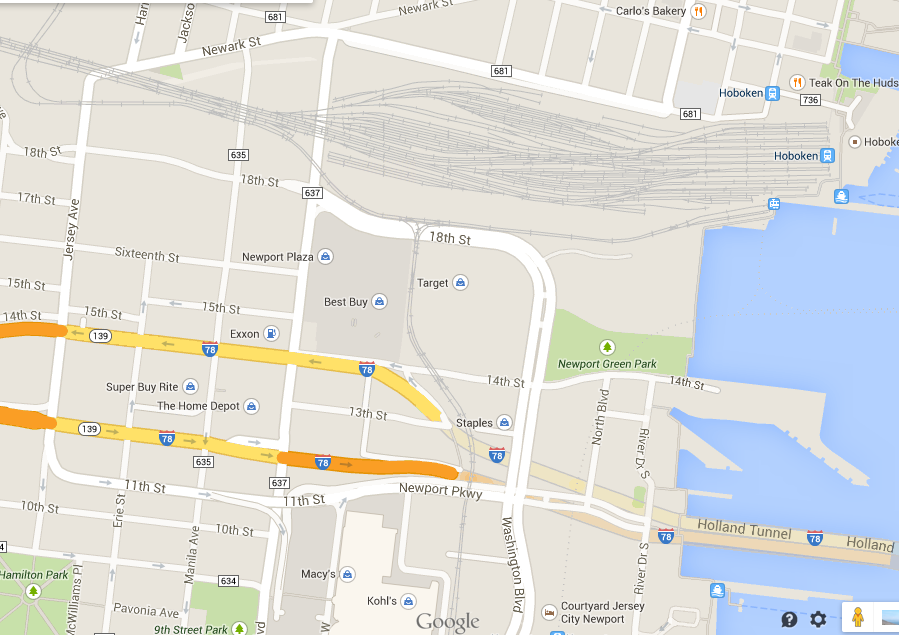 Incidentally, this cluster of big box retail sits just south of a huge rail yard, easily visible on the map. And north of the rail yard is the border for Hoboken, another densely populated waterfront suburb, but one with a vibrant commercial main street, filled with retail and pedestrians at all times of day. 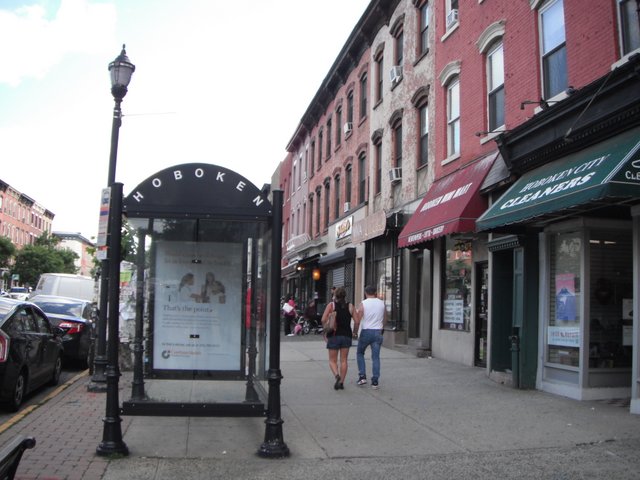 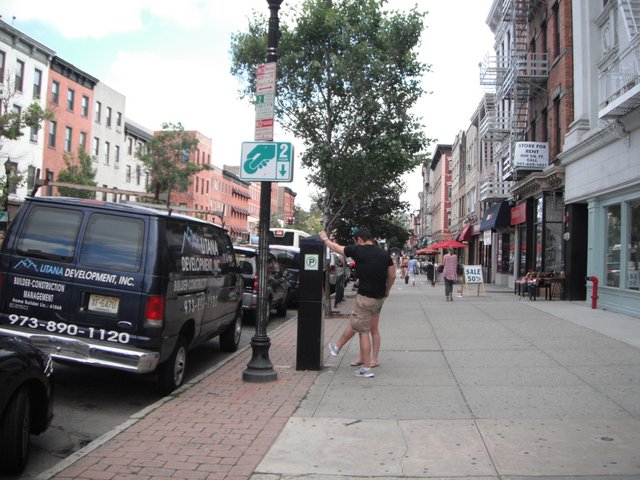 To be fair, Newport is hardly the alpha and the omega when it comes Jersey City’s retail centers. The historic downtown to the west of the waterfront consists primarily of two to four-story 19th century buildings, with numerous street-level storefronts along Grove Street and Newark Avenue. Many blocks in the older, “real” downtown of Jersey City boast an activity level on par with Hoboken.

If anything, the uninspiring streetscapes of Newport most likely reflect the mindset driving development during the time of the district’s founding. Back in 1986, when the LeFrak family’s vision first started to take root, much of Jersey City was down on its luck, having left the doldrums of the 1970s in its wake—a time when the city lost a staggering 14% of its population. At that point, this inner-ring suburb of New York City had been shrinking ever since the Great Depression. Though a far cry from its 315,000 peak, it has posted an increase in population for the last three decades. But no one could have anticipated that in the 1980s, when The LeFrak Organization took a chance by purchasing land in a district of dilapidated warehouses amidst a field of creaky, neglected railroads. At a time when even Manhattan’s future appeared murky, suburban living still seemed like the solution, so it comes as no surprise that the land uses surrounding LeFrak’s bold move still reflect the demands of a mostly suburban clientele. The mall, the bargain department stores, the wide streets, the visible parking lots—all of these in the 1980s seemed like essential gestures to attract a population seemingly incorrigibly averse to urbanism.

The times are changing, but the remaining boxy Staples and Best Buy, monolithic amidst their generous parking lots, feel more like the final unpainted portions of a canvas, rather than a byproduct of lackadaisical urban design. By this point, Jersey City’s escalating land values promise a higher and better use in the near future, particularly for a struggling national chain like Staples. If the chain folds, it’s a matter of time before a savvy builder puts something with a higher Floor-Area Ratio in its place—that is, a taller building that yields a higher rate of return.

In the meantime, until the stronger economy forces developers to strategize on their urban design, Newport will continue to limp along. It’s still a killer place for an office, and I have no doubt that Bertucci’s can fill its tables during a Thursday lunch. But this abundance of youthful skyscrapers in an environment that remains steadfastly car-centered looks less like a satellite of New York City and more akin to Dubai. (Or, at least, everything except the historic center of Dubai, which still remains pretty pedestrian friendly.) No matter how great the density of jobs and residents, no matter how robust the mass transit, the fundamental character of the buildings and streetscape in Newport does not lend itself well to pedestrianism. What it does yield, however, is a perfectly extreme application of urban transect modeling, in which the form skips several typological layers, going directly from an urban core zone (in the heart of Newport) to a suburban zone north of Newport Parkway, where the Staples first appears. But Newport’s atypical renaissance places it at odds with most theories on urban form, even if the results are less than meets the eye. If the developers make sharper decisions as they continue to invest in the area, maybe sometime they’ll be able to promote a level of energy to the streetscape that will convince people to walk around. And Bertucci’s won’t have to deploy placeholder signage to make up for the sluggish weekend business.

PrevWhen public spaces reflect modern life—by not reflecting anything at all.
Welcome to my domain.Next

5 thoughts on “Who knew that the City That Never Sleeps had a narcoleptic neighbor?”