When a street is not a road.

My year and a half in Afghanistan working under the US Air Force confronted me with a new acronym almost every day. One of the bases for which I wrote a comprehensive plan required a “Glossary of Acronyms” in order to sort them all out, ballooning to several pages in length. It was exhausting.

And then there are the words made up on the spot.

Generally speaking, I leave neologisms to the likes of Buckminster Fuller. And even though acronyms don’t qualify as newly minted words, they can serve largely the same semantic function. It’s hard not to scan the cultural forces that help to elicit both acronyms and neologisms with a certain level of amusement. I’ll admit that I’ve deployed a new word from my artillery from time to time. (I’d like to think I coined the term “popera” long before it achieved musical relevancy, but no one will see me phoning my lawyer.) Even though the output of fabricated labels within the discipline of urban studies pales in comparison to the Department of Defense, I still find that I’m rarely in the up-and-up when it comes to new trends or the modish terms to describe them.

Which brings us to the stroad. I wasn’t aware of what a stroad was until just a few months ago. Semantically, it seems just as inaccurate as the façadectomy that I have referenced a few times in the past.  After all, “stroad” is a portmanteau of “street” and “road”, used to characterize an arterial that seems to share features of both, but also nullifies their intrinsic advantages. But aren’t “street” and “road” synonymous? According to a recent City Lab article, Chuck Marohn, a “recovering traffic engineer”, coined the term “stroad” to describe any right-of-way that “moves cars at speeds too slow to get around efficiently but too fast to support productive private sector development”. Therefore, a stroad tries to achieve the most desirable characteristics of both roads (for their ability to move vehicular traffic quickly) and streets (for their ability to link neighborhood features in an aesthetic manner that remains safe and appealing for all users). It fails on both counts. According to Marohn, “anytime you are traveling between 30 and 50 miles per hour [as is typically characteristic of a stroad], you are basically in an area that is too slow to be efficient yet too fast to provide a framework for capturing a productive rate of return.” Marohn has created a video through his nonprofit Strong Towns that offers a visualization of an archetypal stroad.

My long-repressed English major has turned me into an insufferable semantic nitpicker. Here I criticize Marohn for placing two words—street and road—into tidy, discrete semantic boxes…two words that for most people are fungible. Beyond that, I need to chill out, because Marohn’s neologism is effective in pretty much every other sense. Regardless of whether or not a stroad blends a street and a road, as anyone else would define it, it still feels like a hybrid of two types of right-of-way. Perhaps it cold be called an arterial and a collector (a “collecterial”?), but then those two terms are fully entrenched in the lingo of transportation engineers.

“Stroad” really conveys another key point. It’s one ugly sounding word—clipped, aggressive and vulgar. It almost sounds like a blend of stoat and toad, two largely unloved animals. And, in my first real-life encounter with a stroad (at least at a point when I knew what the word meant), the first thing that occurred to me was the unattractiveness of the landscape. Here it is. 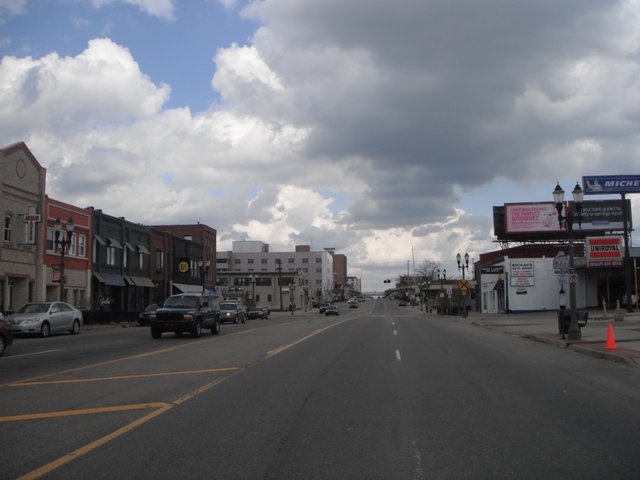 I’m looking eastward down Michigan Avenue, in the Great Lake State’s capital of Lansing. And it’s obvious that this major street, which connects downtown Lansing to the campus of Michigan State University in nearby East Lansing, has enjoyed a number of investments that attempt to make it a more attractive environment for pedestrians. Notice the vintage lamps hugging the curbs. Another angle reveals some “bulb out” sidewalk designs intended to lower the section of the street necessary for walkers to cross at a given crosswalk, as seen below: 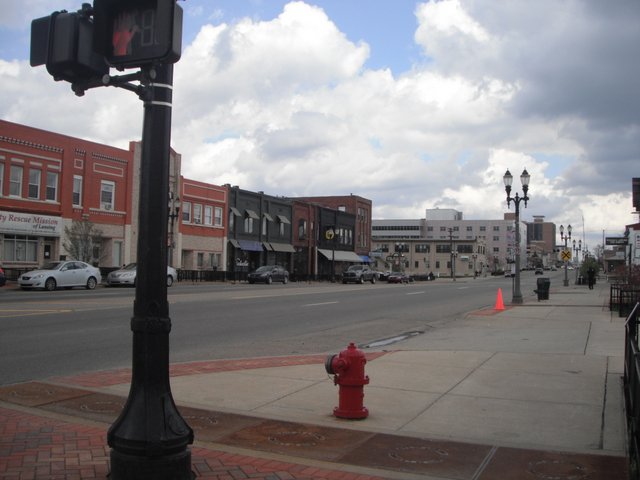 And, to be fair, quite a few of the structures on the north side of the street (to the left in these photos) date from a time period when most buildings directly addressed the sidewalk.   But the side on which I was standing—the south side—shows the fierce competition that those handsome old two-story buildings must face. 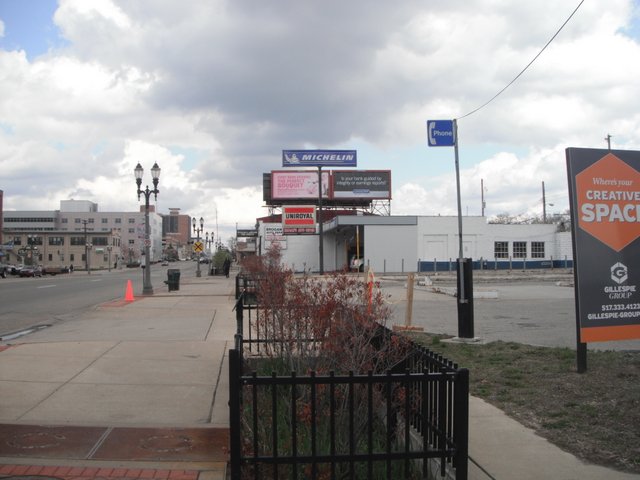 To be fair, real estate speculators have caught on to the notion that this is a redeveloping area, and someone is trying to market this corner parcel to capitalize on what is ostensibly an emerging district for young professionals. 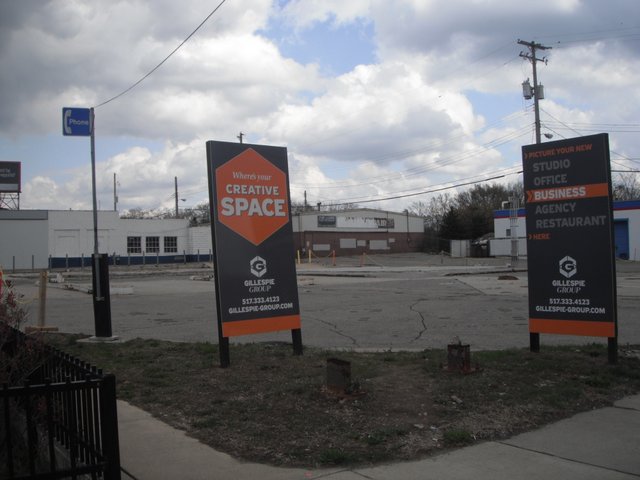 I wish this developer the best of luck. He or she may very well succeed. After all, just a half-block to the west, on the north side of the street, sits the Cooley Law School Stadium, an apparent recent addition that has prompted certain civic boosters to brand this stretch of Michigan Avenue as the “Stadium District”. 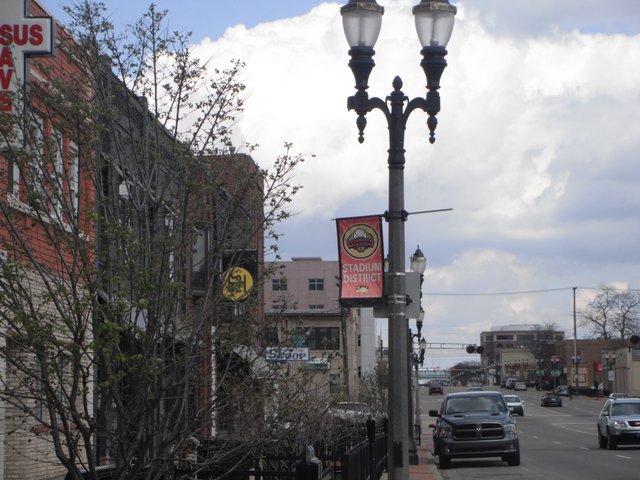 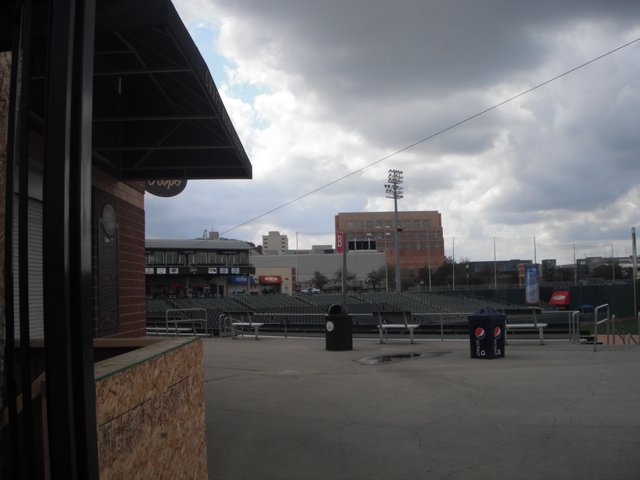 And on the otherwise desolate south side of the street, another obviously recent mixed-use development sits just a little further to the west, ostensibly capitalizing on the Stadium District name. 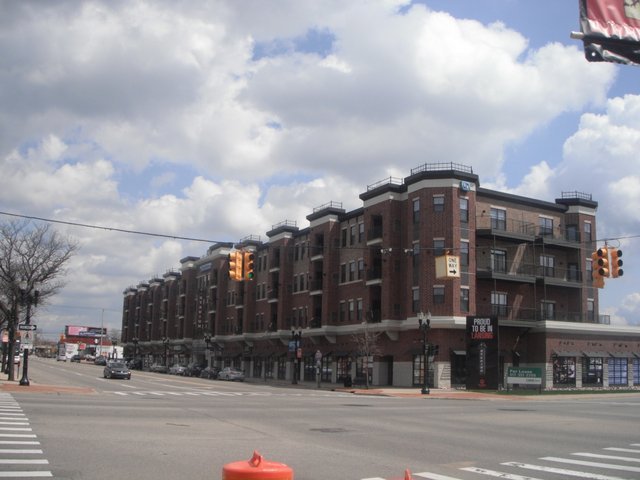 And, another block to the west, an old industrial building has benefited from a repurposing into a mixed-use facility with restaurants on the first floor. 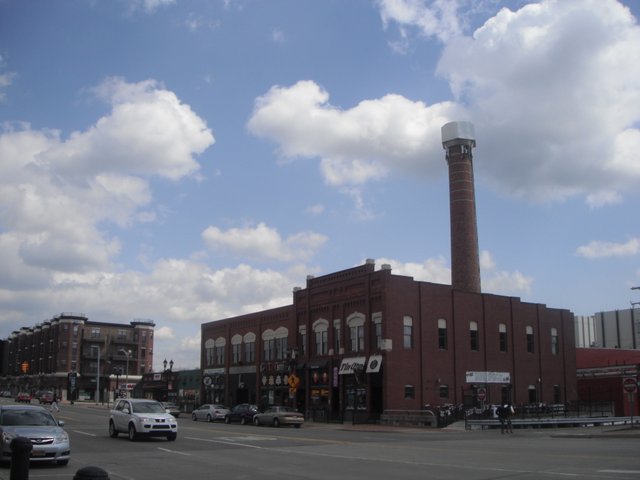 Perhaps Michigan Avenue will come together wonderfully as a corridor with densely interwoven different uses. It doesn’t hurt to be optimistic. After all, this stroad terminates just a few blocks further to the east, at the Michigan State Capitol. 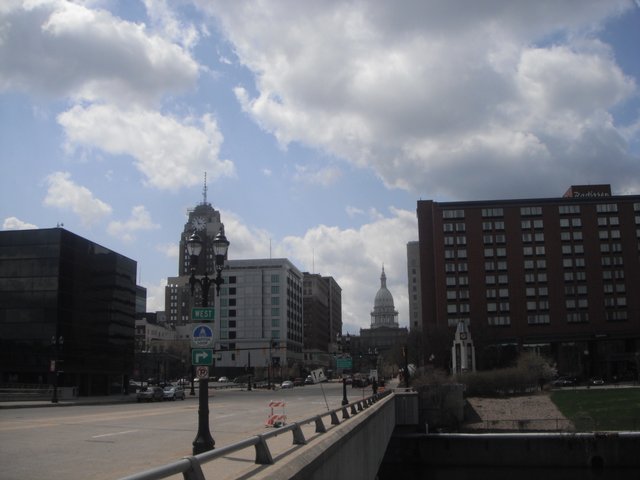 The elongated dome of the Capitol is visible in the distance. So this Stadium District is just a football toss away from Lansing’s downtown and the center of Michigan’s government. (But, incidentally, not the Ingham County seat. Lansing is among the only state capitals that is not also the center of government for its respective county.) But compare Michigan Avenue to another, smaller commercial thoroughfare in central Lansing: 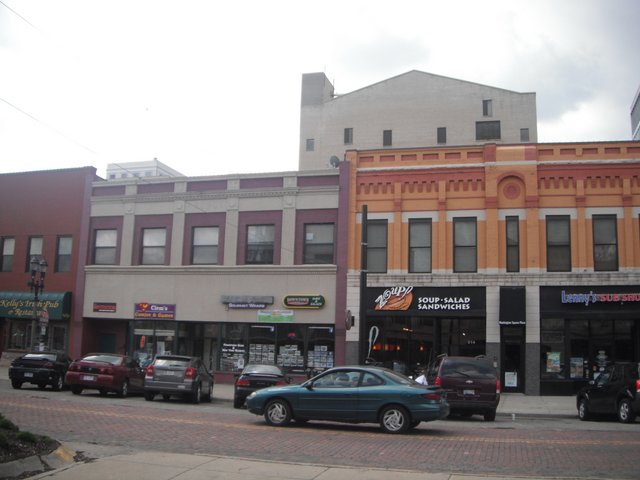 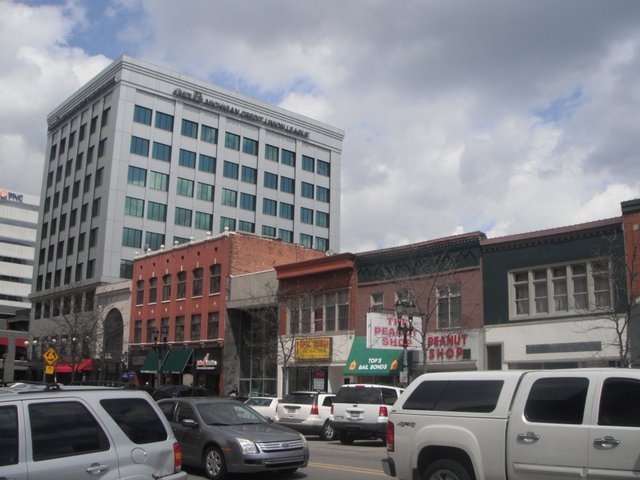 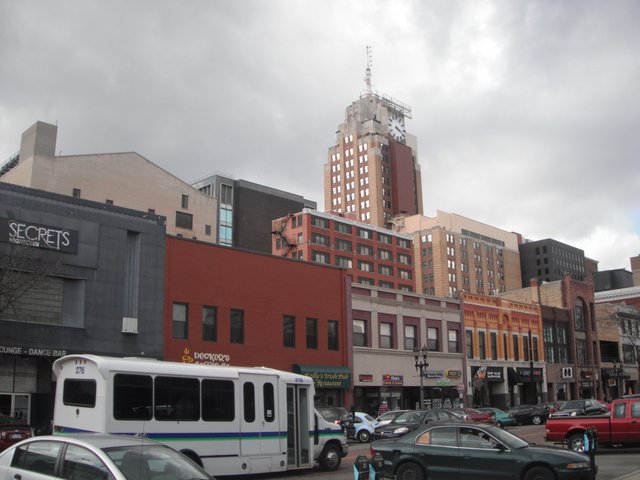 The above pictures reveal the streetscape for Washington Square, a street perpendicular to Michigan Avenue that runs just a block east of the capitol. Both roads are visible on the map below: 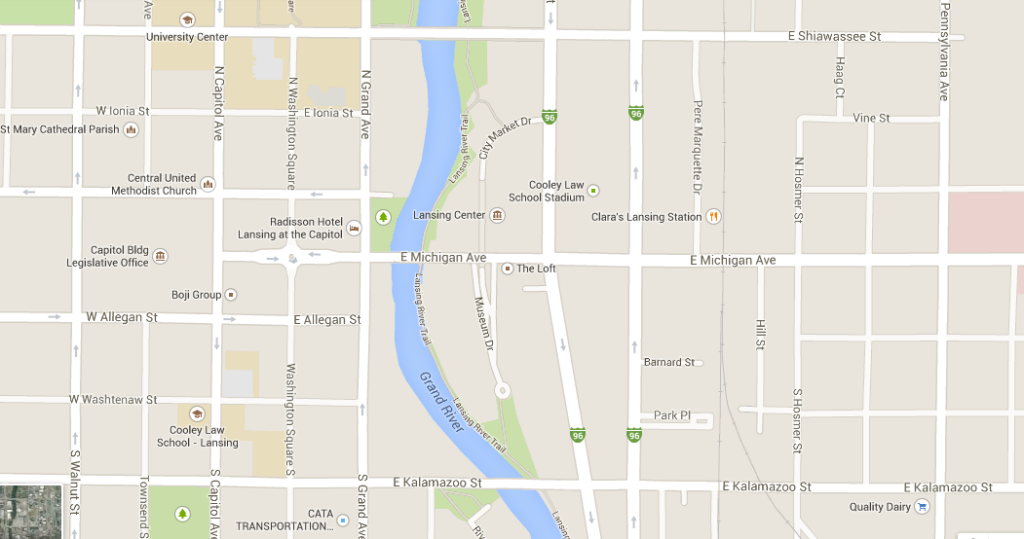 On Washington Square, cars can still get where they need to be, but never while careening at 50 miles per hour. The abundance of on-street parking—most of it occupied on a lazy Saturday afternoon—integrates peaceably with the copious sidewalk-oriented buildings, resulting in an environment that is far more likely to foster higher concentrations of pedestrians. Compare once more with Michigan Avenue just a few blocks away: 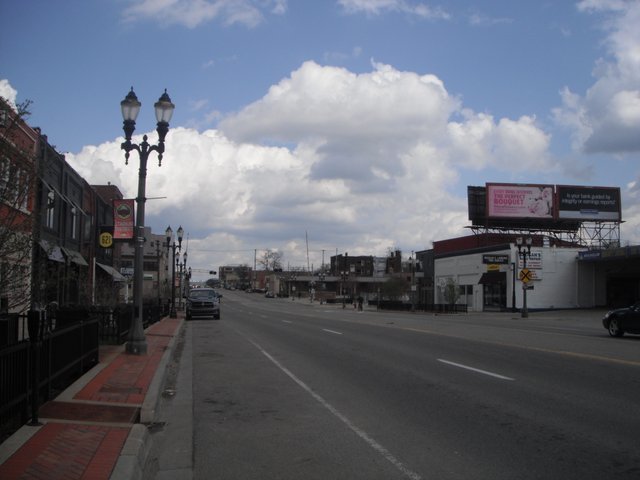 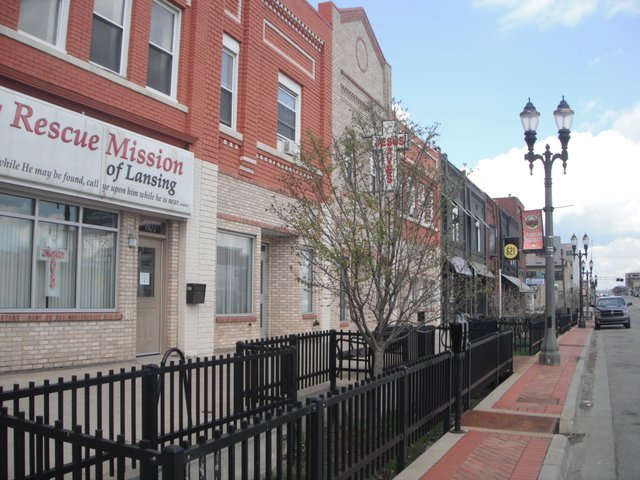 Churck Marohn recognizes that stroads often boast superlative investment. But to what end? The sidewalk on the right looks great, with decorative brick pavers, street trees, and wrought iron gates. But the gaps between all the buildings on the right suggest that most landowners in this area still prefer setting aside plenty of space for off-street parking. Meanwhile, on the left, abutting the Cooley Law School Stadium, is another big parking lot. 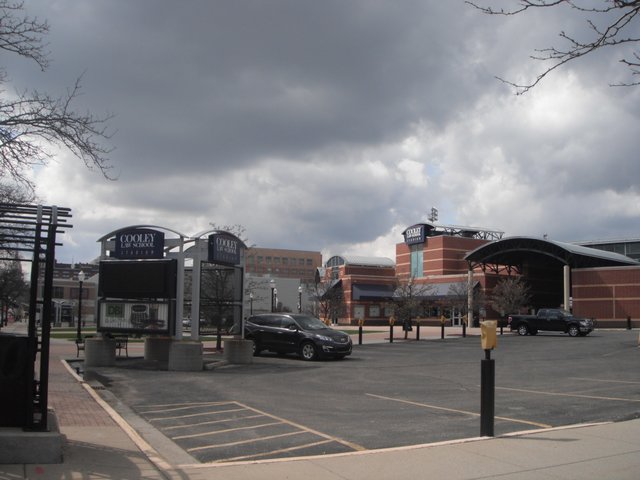 And since parking lots are not exactly a high-intensity land use, chances are the land values along Michigan Avenue are significantly lower than Washington Square. Admittedly, Washington Square is in the heart of downtown, but Michigan Avenue’s effort to assert itself as a competing Uptown district isn’t bearing the same fruit.

On his stroad video, Marohn asserts, “Parking lots don’t employ anyone, and parking lots don’t pay a lot of taxes, so this environment becomes very low-yielding.” Frankly, it’s amazing that this stroad has even achieved what we see now.   But the investment to get here has been formidable, and it’s hard to imagine that the buildings that flank this seven-lane arterial will ever host sufficient density to make it hot real estate that can attract college students away from the much better, stroad-less street network in MSU’s hometown of East Lansing. The only conceivable way to scale down this stretch of Michigan Avenue would be to turn it into a full-fledged street—or at least Marohn’s definition of a street—by giving it a road diet that invites the superfluous lanes to accommodate bicyclists, pedestrians, carefully deployed greenery, or mass transit stops. But that, again, would require more infrastructural investment—the exact sort of Pyrrhic victory that has borne so many stroads in the first place. By this point, that sort of money would go to better use in a complete urban dictionary. Or a guide to the US Air Force acronyms.

PrevAging at home: does it have to be an uphill climb?
When public spaces reflect modern life—by not reflecting anything at all.Next

2 thoughts on “When a street is not a road.”