Who initiated the scrawled controversy? We know (k)nothing.

In a city as replete with illicitly painted buildings as Detroit, it isn’t hard to find graffiti in which the subject matter both polarizes and fully illustrates the ongoing debate between two parties.  In some parts of the country, these polemics rarely stray outside of the stalls of men’s restrooms.  They’re low-key and almost private.  But in Detroit, the debates can take place in the great wide open, on the walls of buildings, lampposts, trashcans, or even the side of a water tower, as I noted a few months ago when I witnessed how one artist transformed the raised fist of solidarity into the heavy metal “sign of the horn”, thereby deflating its potentially incendiary political implications. 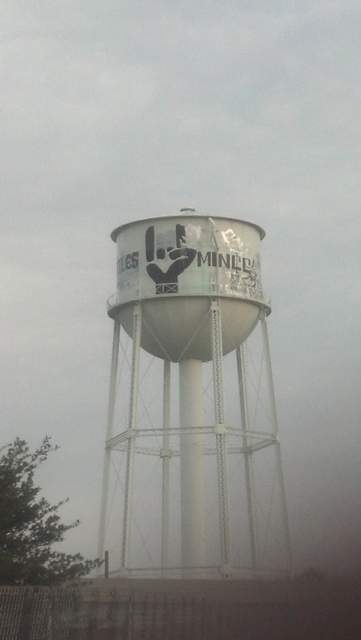 But you don’t always have to look at the horizon line for inspiration. 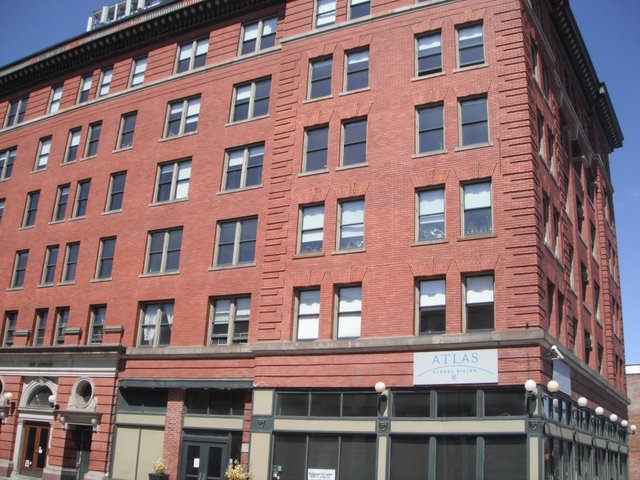 The Addison Building on Woodward Avenue, originally designed by “the architect of Detroit” Albert Kahn around 1905 and restored as market-rate apartments, offers an interesting point-counterpoint at the storefront level. 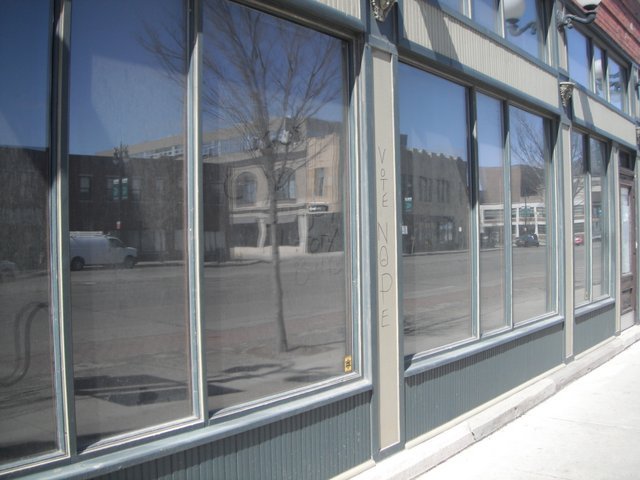 Scrawled in what appears to be a thick Sharpie is some artless text in all caps: 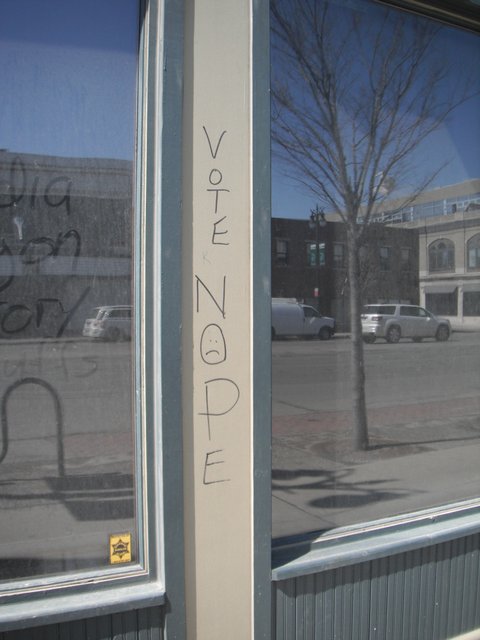 It says—or at least appears to say—“VOTE NOPE”, which doesn’t convey any precise political directive.  But it’s actually a loosely modified variant of a more common graffiti trope found throughout the Motor City.  Here, on a building at that same intersection as the Addison, is the more common wording. 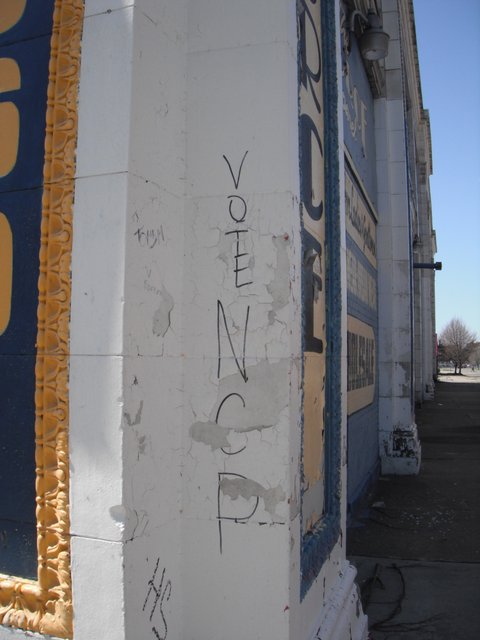 It clearly says “Vote NCP”.  And the tag shows up all over the place.  Again, the meaning isn’t necessarily clear, unless you know what the acronym NCP stands for.  And most people, it seems, do not.  It was a mystery when I arrived in Detroit last summer; it took some real detective work to draw any conclusions.  The most thoughtful discussion came from a DetroitYES! forum, where a number of participants offered their ideas.  One of the most likely contenders is the New Century Party, a PAC run on the west side, but its hard to reconcile this recent and short-lived organization with the general observation that these scribblings have been around for awhile.  And why wouldn’t a registered political organization choose a more legitimate (and legal) way to promote its cause?

Thus, the word on the information superhighway is that NCP stands for “No Colored People”—about as overtly racist of a statement as one can expect to see, except, of course, that it isn’t particularly overt at all.  Anything less ambiguous would probably attract local media attention, but this branding has never amounted to much of anything, despite the fact that it’s everywhere in downtown and Midtown: buildings, awnings, trashcans, billboards.  The general penmanship is always the same, so a graphologist might be able to determine if it all belongs to the same person: a solitary, cowardly, anonymous provocateur.  I can vouch from experience that, until recently, the tag on the Addison building said “Vote NCP” like all the others. A closer look at the lettering shows how someone else has modified what used to be the letter C into an O, filled the void with a sad face, then added an E to the bottom. 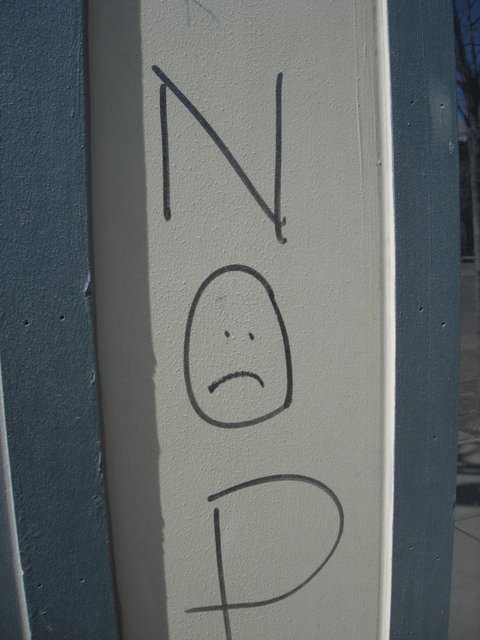 So it appears another vandal has attempted to douse the fire by undermining the implicit racial hostility of the original message.  “VOTE NOPE” conveys apathy at the very least—far more preferable than racism.

But that’s not all: another clown made a separate contribution to this aesthetically challenged palimpsest.  In faint green ink, just above the “N” from “NOPE” is another letter. 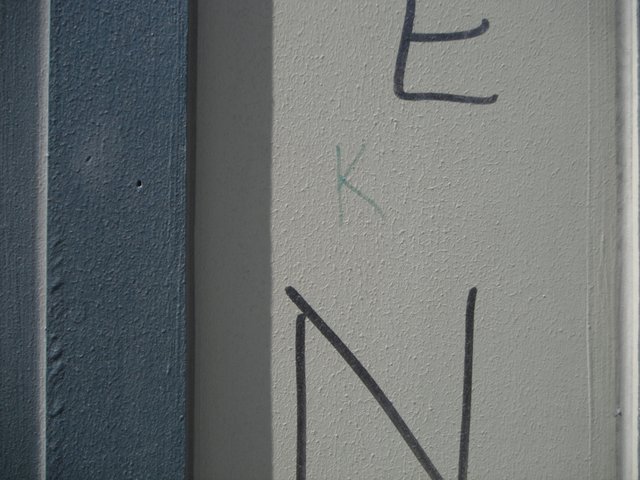 It’s a “K”, spelling “KNOPE”, or “VOTE KNOPE” in totality—an obvious hat-tip to Leslie Knope from NBC’s Parks and Recreation, a show whose devoted, cult-like fan base (and this cult’s ability to extract memes from the show’s script and characters) has helped it overcome lackluster Nielsen ratings.  It doesn’t seem that our crusading anti-racist gigglefritzes made it too far though; virtually all of the other “VOTE NCP” tags downtown have retained the vitriol of the original message.

Whether 30 feet tall on a water tower or 18 inches near a storefront window, graffiti’s intrinsic deviant and anti-establishment nature effectively smashes through any constraints imposed by artistic license.  It involves unsanctioned self-expression that doesn’t violate the First Amendment because of the disregard to private property embedded in the expressive act.  Beyond the commission of a property crime, the only true boundaries to graffiti artists are an individual’s creative limitations and the laws of physics.  Because a vandal cannot litigate if someone else defaces his or her art, anything is fair game.  Thus, in terms of intellectual property, the hastily scribbled rants on a public restroom stall are semantically no more or less powerful than a lovingly-conceived fist of solidarity, or a cryptically racist chant that achieves visibility through its ubiquity.  Virtually any provocative message on men’s room walls will eventually elicit an equally inflammatory anonymous response directly below it.  The “VOTE KNOPE” and “sign of the horn” involve the same ethos as the tit-for-tat near the gas station toilet, only the respondents have more time on their hands, a lot more ink, or much less fear of getting caught.  But then, can’t we say the same about even the most widely admired graffiti?

PrevSeparate the ersatz and collect up all the cream.
Urban recycling: not a bad (unironic) beer in the box.Next