Separate the ersatz and collect up all the cream.

While the interplay between the built and natural environments occupies the bulk of my ruminations, every now and then I can’t help but indulge myself.  And I step fully into the world of pure imagination.  The aisles of a Meijer discount hypermarket store might not be exactly what Roald Dahl had in mind through his chocolate factory (or Leslie Bricusse), but it’s just about as fabricated as a movie set… 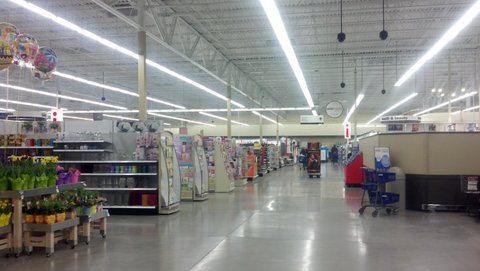 …and that’s not necessarily a bad thing.  For those who live in Michigan, Ohio, Indiana, Illinois or Kentucky, Meijer is as much a part of the shopping landscape as Walmart.  It’s a fierce competitor in these five states, and I have no doubt it continues to frustrate the executives in Bentonville, Arkansas—my suspicion is that Walmart’s market share in this part of the country is lower than it otherwise would be, thanks to this modest chain that germinated just outside of Grand Rapids, Michigan exactly 80 years ago, making it nearly 30 years older than the world’s largest retailer.  But how did Meijer remain confidently ensconced in its Midwestern niche when Walmart dethroned so many others?  (Ames, Pharmor, and Venture went the way of passenger pigeon well over a decade ago, even if some telltale labelscars remain.)

I could expound on how Meijer has effectively cramped Walmart’s style for a few decades now, all while refusing ever to go public.  It avoids far-flung locations like its home state’s Upper Peninsula, no doubt saving it a fortune in logistical costs.  It expands its territory slowly, preferring to densify within its five signature states for the time being; rumors of an inaugural location in Wisconsin have yet to materialize.  It has attempted to broaden its scope through standalone discount department stores (without the groceries), pharmacies, warehouse clubs (like Sam’s Club), and specialty clothing.  None of these concepts proved fruitful, so the home office closed them within a few years.  Yet it continues to flourish in that cluster of great lakes states (and Kentucky).  Last year, Meijer opted to open a store in the Detroit city limits, seen in the photo above –a breakthrough of sorts, since many other major retailers (including the goliath from Arkansas) have shunned the Motor City.  These conservative strategies may have helped Meijer survive the competition that Walmart decimated, but I’d like to think another tactic has helped give the regional chain its edge. 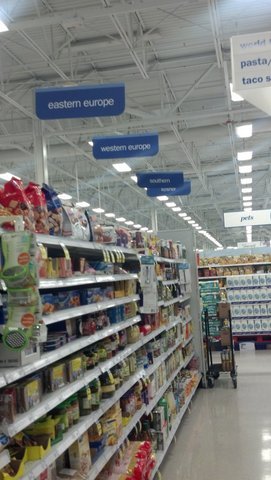 Virtually every Meijer that I’ve seen has an entire row in its well-maintained grocery devoted to ethnic foods.  The specific location often dictates exactly what options it sells, but regardless of the offerings, most evidence suggests that the company has done its research.  Rarely will you see Walmart accommodate an ethnic group (such as Amish buggy parking in Northern Indiana). But online forums like British Expats routinely refer to Meijer—not Walmart—as the go-to for hard-to-find European goodies, and most locations have at least a small but well-stocked British shelves, including the one in the Detroit suburb of Allen Park featured above.  This particular location, with a trade area that includes sizable Mexican, Polish, and Arab populations, not surprisingly offers generous Latino, Eastern European and Middle Eastern sections.  It also distinguishes the Indian subcontinent from the rest of Asia. 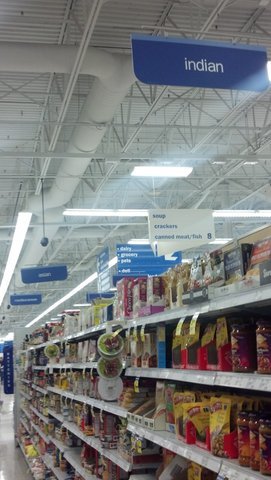 But what really caught my attention was the adjective before these regional references. 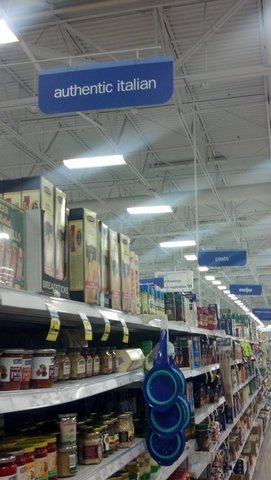 We see “authentic Italian” followed by “pasta”.  Does this imply that the pasta section, for whatever reason, is otherwise inauthentic?  Or is it pasta from other countries?  Meijer also splits hairs on the other side of the aisle, providing its customers with “authentic Mexican”— 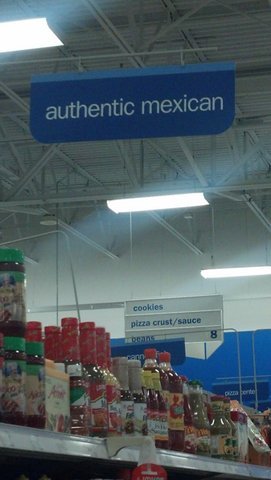 and “Mexican” without the authenticity. 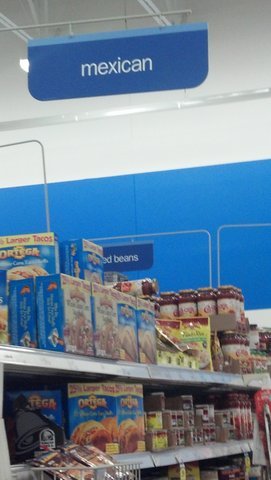 Tex-Mex.  Or American Mexican.  A taqueria versus Taco Bell.  Various studies have shown three ethnic cuisines in the United States consistently vie for the title of most popular—and, not surprisingly, the most ubiquitous.  While the US has more Chinese restaurants than McDonald’s, Italian cuisine has long rated most highly.  But the surge of Mexicans and the cultural influence have elicited a concomitant increase in the popularity of cuisine from south of the border.  Virtually all ethnicities, however, can claim a rise in the popularity of their cuisines.  Thirty years ago, Thai and Indian restaurants were relatively rare outside of the biggest metro areas; now they are fairly easy to find in a small city of 50,000.

The inevitable result of this?  We see more Americanized knock-offs, as well as Meijer’s need to distinguish between the “authentic” (often imported) and the bastardized.  No doubt in another decade, with the ascendancy of falafel, hummus, and shawarma, Middle Eastern cuisine will approach mainstream status, just as it already has in Metro Detroit, home of one of the largest Arab populations outside of ethnically Arab countries.  We already have hummus flavors that would constitute blasphemy in many parts of the world, adulterated to meet mainstream American tastes.  The “authentic” partition in the grocery aisle will soon envelop new nations, impelling greater need to distinguish idiosyncratic, ethnically precise merchandise from its vanilla counterparts…and another opportunity for Meijer to capitalize on something it already does well.

3 thoughts on “Separate the ersatz and collect up all the cream.”