Some businesses just fail to quit, though it’s not necessarily from lack of trying.

And if all the negatives in that sentence dilute the denotation, that might be the whole point…at least when the businesses in question are former retail leviathans like Kmart and Sears.

I’ve written about both chains many times in the past on this blog, but little to nothing since 2010 or so.  Truthfully, neither has changed much.  The two brand names, formerly separate companies but merged since 2005, continue to hobble along, shedding a few of the most underperforming stores each quarter, while even the ones that linger still leave onlookers scratching their heads.  How do these retailers—now essentially one company called Sears Holdings Corporation—manage to stay in business?

To a certain extent, they employ the Star Trek mantra: going where no man has gone before…or, to be frank, where no one else is willing to go anymore.  So they aren’t exactly doing it boldly.  Kmart’s approach (which I blogged about four years ago) frequently involves lingering in early automobile-oriented suburban areas that peaked in the late 1950s—the point in time when Kmart was still a juggernaut for discount shopping.  However, these aging suburbs, which typically offered the coveted homeownership ideal to an emergent middle class within a car-dependent milieu, are no longer so savory.  Check out the surviving few Kmarts in Indianapolis, from the blog post above.  Generally speaking, these areas have declined enough economically that the robust Walmart won’t touch them.  In Kansas City, the formerly thriving Bannister Mall area began to tank in the 1990s; today, it represents one of the largest expanses of blighted suburban retail I have ever seen anywhere, featured in this prominent post.  But, as of the fall of 2012, the Kmart at Bannister survives…pretty much the only well-known sign amid the retail wreckage.  (Well, that and the notorious Burlington Coat Factory, but that’s another story.)

Then there’s Sears, whose brand image isn’t quite as weak these days as Kmart, mainly because it still clings to its aggressively middlebrow origins, a contrast from the always low-budget offerings at Kmart.  (Though Kmart has managed the more effective viral commercials in recent years.)  The department store remains a staple at most middle-class malls.  But enclosed shopping malls ain’t what they used to be, for the most part, and if a mall is starting to show weakness in the form of diminishing occupancy levels, it’s often safe to guess which area will get hit the hardest.  That’s right—the Sears wing.  I blogged about it awhile ago, at the primarily successful Castleton Square Mall in Indianapolis, where vacancy was low throughout this super-regional shopping hub…except for the hallway leading to the Sears.

Meanwhile, Cortana Mall in Baton Rouge took the ailing Sears corridor to a whole new level.  My first trip to Cortana in December 2005 confronted me generally busy shopping center, even though locals had longed viewed Cortana as the “other mall” in Baton Rouge, at least since Mall of Louisiana opened in 1997 in a more affluent part of town.  In 2005, most of Cortana flourished (perhaps due to the holidays), except for the hallway leading to Sears, which was overwhelmingly populated with local, mom-and-pop tenants…the type that pervade a struggling mall.  Jump ahead to April 2010—the time of my blog article—and Cortana was peppered with vacancies throughout the structure, while the Sears corridor was dead as a doornail.  Pretty much no inline tenants left, except for Sears.  Even in the most vibrant of malls, the Sears wing tends to host the highest concentration of off-name retailers, clearly suggesting that 1) national brand names don’t want to lease space close to Sears, and 2) mall management, desperate to maintain good occupancy rates, must lower the cost of leasing space, consequently attracting retailers who cannot afford the higher costs in the corridors leading to Macy’s or Dillard’s.  Thus, Sears gets the off brands…when it’s lucky.

A recent trip to suburban Detroit revealed another example of an anemic shopping hub anchored by Sears, but this time within a different typology. 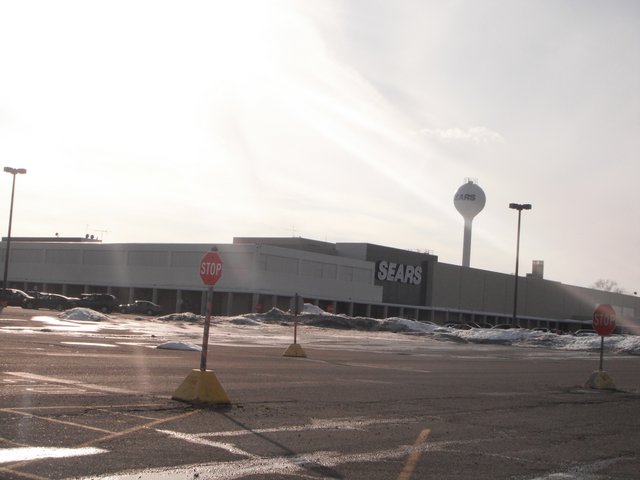 Sure, it doesn’t really look that different from your typical Sears in a mega-mall. 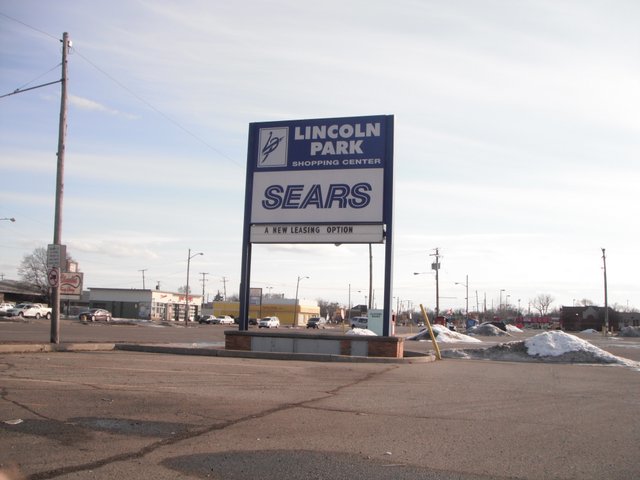 But it’s a freestanding Sears—formerly a mainstay of American retail but now relatively uncommon. It is untethered to any larger mall; no other department stores are nearby.   While the standalone Sears might still occasionally splay out along the highway in the purlieus of a small city (under 25,000 people, for example) the one in the photos below is anything but rural.  It’s in Lincoln Park, a blue-collar inner-ring suburb belonging to Detroit’s “Downriver” communities, which is the local term for the extensive concatenation of municipalities that band along the Detroit River as it eventually distends into Lake Erie.  A fully built-out suburb that exploded after World War II, Lincoln Park is also surrounded in almost all directions by other tightly packed suburbs from more or less the same time period.

Freestanding Sears operations made sense in large towns or small cities surrounded by farmland, since those settlements didn’t necessarily have the trade area to support a regional mall.  But Lincoln Park can claim hundreds of thousands of people within a 10-mile radius.  Perhaps, because of this, one could speculate that this particular Sears serves as a more effective anchor than others: not only does it serve a huge trade area, but it isn’t competing with other, more robust department stores like Macy’s.

Such a guess would be wrong. 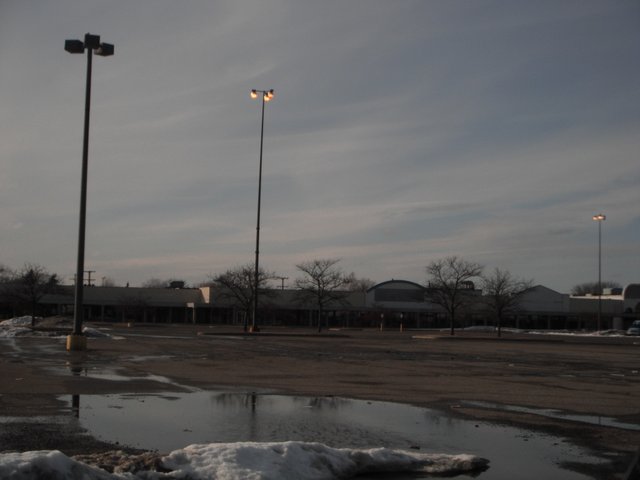 This is the remaining strip mall attached to the Lincoln Park Sears.  In the first photo, the edge of the Sears portion is partly visible on the far left. 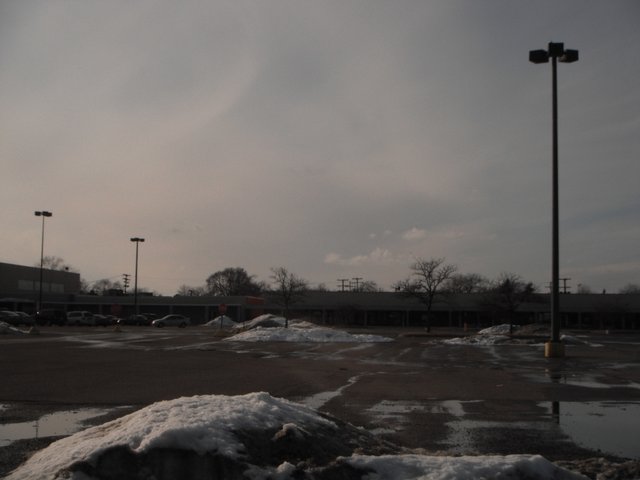 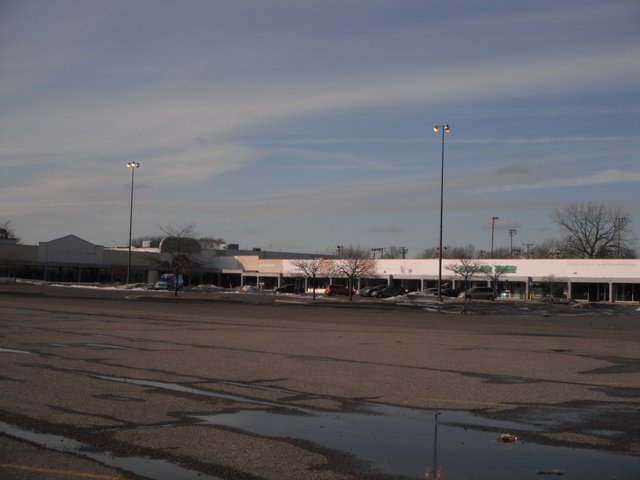 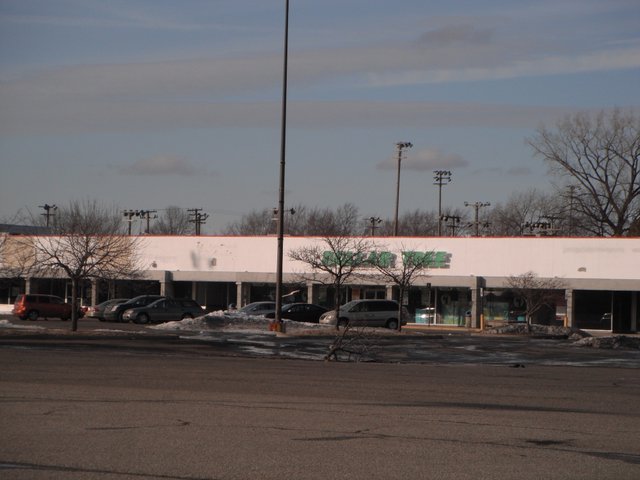 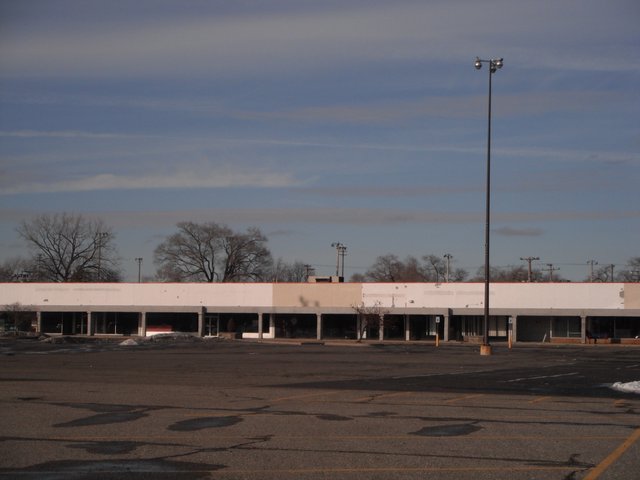 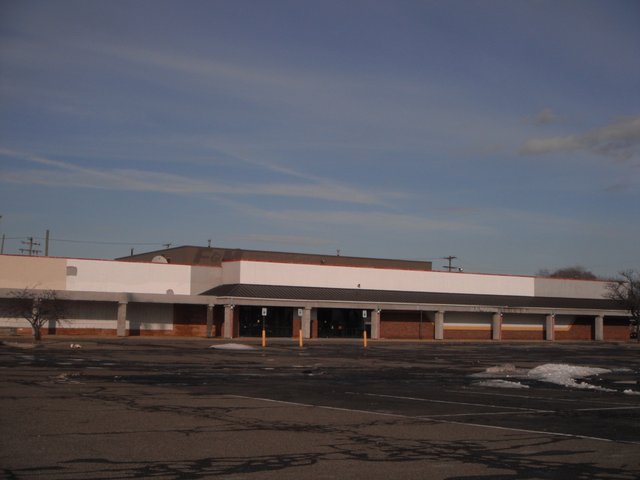 It’s almost completely vacant, with the exception of a Dollar Tree and an outparcel Big Boy restaurant. 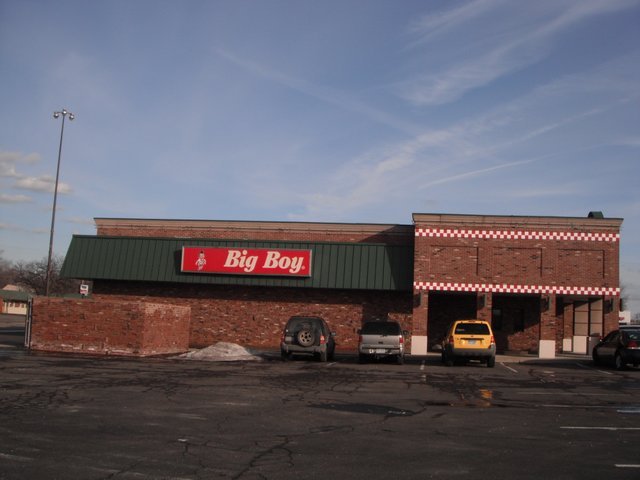 Predictably, a shopping plaza such vacancy levels won’t shell out the cost for basic common area maintenance; drivers have to proceed with caution to avoid huge potholes or neglected debris. 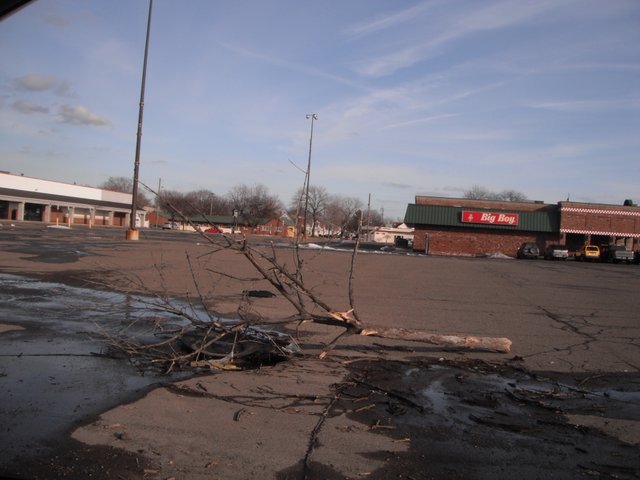 Does Sears Holding Company, parent of Sears and Kmart, know something the rest of us don’t?  Both chains are born from major Midwestern urban centers—Sears from the Chicago area, and Kmart from metro Detroit (in Troy, MI, just 25 miles northeast of Lincoln Park) but customers in their home states aren’t showing any greater loyalty to their brands than they are anywhere else.  The business expansion practices that impelled these brands to stretch from coast to coast may very well be doing them in; most Midwesterners don’t even know the brands came from their part of the country.  Compare this to southern department stores Dillard’s and Belk, which are still mainstays south of the Mason-Dixon and have ever so slightly begun to expand, though never to the ubiquity of the two former titans above.

I will be amazed if this Lincoln Park Sears is still operating two years from now.  Beyond that, I see only two other plausible courses of action: the company sheds virtually all of its locations outside the Midwest and concentrates its energy by reinvigorating loyalty in its region of origin (which happens a lot with restaurant chains); or, it folds altogether as a brick-and-mortar entity and becomes an online wraith, akin to the formerly pre-eminent but now essentially defunct Montgomery Wards (as Wards.com) and Service Merchandise.  It’s not exactly boldly going anywhere, but the cybermarket offers the best chance scoping fertile pastures when finicky customers reject all but the choicest grapes on the vineyard.

PrevA chip off the old bulb.
Separate the ersatz and collect up all the cream.Next