A time of the signs.

It should go without saying that a clear indicator of an effective sign is its ability to communicate its intended message.  Whether the sign’s intent is to advertise, to inform, or to admonish, it loses most of its power if its capacity to denote doesn’t come easily or quickly (and quickly nearly always translates to easily).  This condition may be true in most milieus, but it’s particularly relevant among roadside signage.  After all, at least in the US, most people approach roadways from the perspective of a motorized vehicle, meaning they are moving across the landscape quickly enough that small objects pass by with little time to absorb them.  So those signs have to be clear…otherwise how can they get their point across?

At a fundamental level, there’s nothing wrong with this unusual sign in Southfield, MI, a large, busy suburb of Detroit with definitive Edge City characteristics. 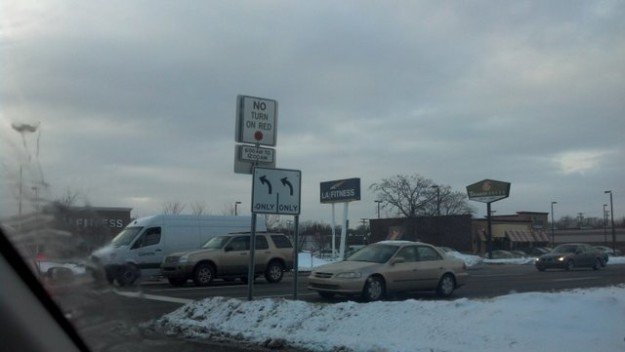 Although signs restricting motorists from turning during certain hours are hardly commonplace, they certainly aren’t unheard of.  Obviously, a succession of cars waiting to make a left turn at a busy intersection can create a logjam, deteriorating the Level of Service of any busy arterial, especially during peak travel times.  But look at the hours listed on this particular sign. 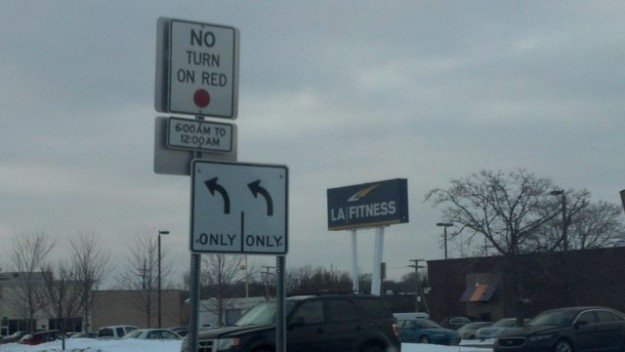 Contrary to our expectations, this isn’t a morning restriction.  Left turns are off limits here from 6:00a all the way until midnight—a whopping 18 hours.  Only in the middle of the night (or early morning), from 12:01a to 5:59a, are vehicles permitted to turn on red.

It probably makes sense: the traffic volume here on Telegraph Road, just south of W. Twelve Mile Road, is so intense that cars seeking to turn left probably should have to wait, at least through most of the day.  But how likely is it that the human eye and brain will interpret this correctly the first time around, even when stopped at the light?  After all, both the beginning and ending restriction times are AM.  Most signs advertising use restrictions only regulate for brief intervals; not three-quarters of the day. Even if a driver stops here for quite some time, the brain is likely to require time to process the fact that this restriction completely encompasses the PM hours. And for those who pass by quickly, then plunge ahead, will they necessarily interpret the information on this sign accurately?  This sign’s unconventional regulation could make it an easy locus for law enforcement to “catch” motorists in a moving violation. (“But officer, I thought the sign said…”)

Truth is, this restriction is nothing more than a refinement of a Michigan left, a fairly common traffic management practice throughout urban areas in the Wolverine State—but pretty rare just about everywhere else.  This tactic, in which a motorist makes a right and then a carefully controlled U-turn (often regulated by stop lights as in the Southfield example above), no doubt reduces chances of gridlock induced by a left-turn lane, albeit by diverting vehicles across a more convoluted path.  Michigan’s famously broad thoroughfares, coupled with generous medians, make the Michigan left superlative at mitigating against the hazard of motorists demurringly seeking a left turn across a broad intersection.  But for the unfamiliar (i.e., the non-Michiganders) the approach confuses and annoys, because it seems so counter-intuitive.  And a road sign with bizarre restrictions only amplifies this confusion.

In MDOT’s defense, the Michigan left is catching on: Indiana installed one at a busy intersection a few years ago (at the border of Indianapolis city limits and the suburb of Fishers) and southwestern DOTs have begun adopting them.  Meanwhile, my former home of New Orleans is perhaps even more enamored with wide medians than Detroit (though they call them “neutral grounds” down there), and the city has long embraced a variant on Michigan, in that motorists usually must make a U-turn at a later point just beyond the intersection, rather than an immediate left turn at the convergence of the two streets.  But the approach involves much more elaborate signage with the Michigan left in metro Detroit, akin to this graphic.

Will the creeping dissemination of the Michigan left across other parts of the country eventually make the “6am to 12am” time frame easier to interpret?  Probably not, unless signage featuring this interval becomes commonplace.  And why should it?  Wouldn’t it have been more straightforward simply to say “left turns allowed – 12am to 6am only”?  Or to depict the interval through military time?  But would American civilians ever catch on to the 24-hour approach, common throughout most of the world?  Yeah, that’s about as likely as switching to the metric system—or surrendering our sovereignty to France.  Which pretty much amount to the same thing.

PrevMeditations on the Marott Center.
Plowing the factories to plant a field.Next