A chip off the old bulb.

Seven months after the announcement, it still seems like the largest municipal bankruptcy filing (at least up to this point) is the stuff of legend—the culminating event, after successive blunders.  The apex.  Or the nadir.  No doubt those of us living here are guilty of a degree of chauvinism as we experience how it plays out firsthand, but it’s easy for anyone with even moderate media curiosity to see how much the city has hogged the headlines.  It may be for all the wrong reasons, but Detroit is prominent once again.

Yet it was only weeks—if not days—after the declaration made international news that, in order to convey to the world the magnitude of the city’s financial woes, journalists honed in on more mundane failures—failures that, by virtue of their banality, were all the more shocking.  Locals have known about them for ages.  A portfolio of abandoned public school real estate larger than many cities’ functional school systems.  An absence of snowplows, even after heavy storms.  A stonewall of silenced civil servants, hogtied from effectively carrying out duties by daily uncertainty about the security of those same jobs.  The virtual absence of any emergency response, resulting in two-hour waits for an ambulance or a police call.

But the one that crowds out the rest, no doubt at last partially due to its ubiquity and ordinariness, is the persistent non-functionality of those streetlights.  One of the editorialists for the Free Press has branded it “the city’s deepest embarrassment”.  By most estimates, up to 40% are out on any given night.  Anyone passing through can tell when crossing into the city limits for this exact reason: even huge stretches of the interstates are black, although they’re state or federal highways.  It’s hard to determine if these shadowy streets originate from a cash-strapped DPW’s inability to replace the bulbs—which obviously require periodic maintenance—or an oversight that far precedes the checkered Kilpatrick administration, when the city’s fiscal woes first garnered national attention.  All it takes is a trip down Mack Avenue on the city’s east side to postulate that the problem is a half-century in the making. 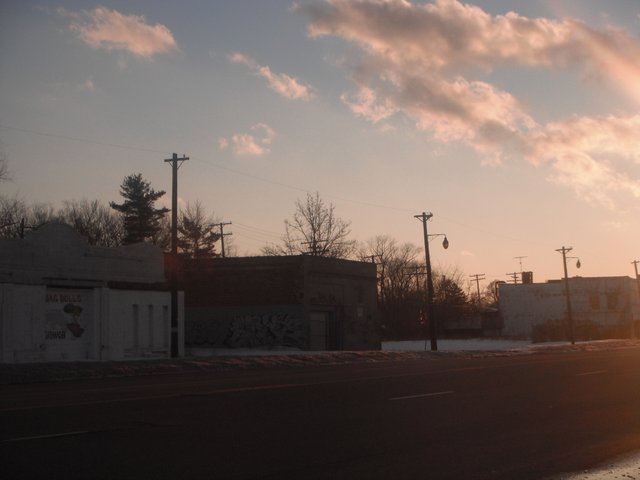 Silhouettes of streetlights punctuate the dusky penumbra, but even at a distance, the shape of these lights seems odd.  Antiquated?  Probably.  And a closer view confirms it. 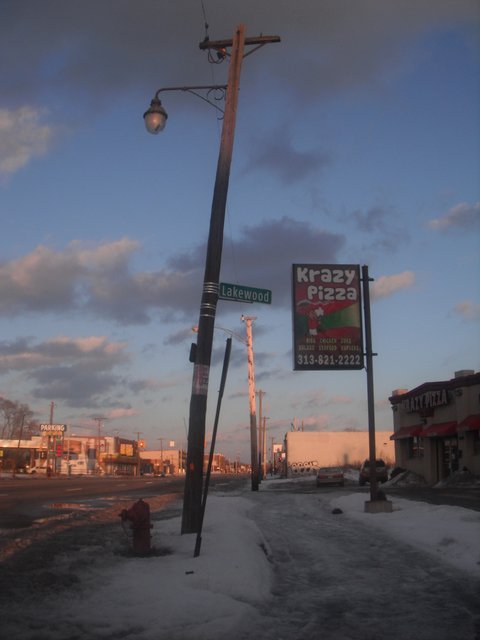 To be frank, I can’t recall seeing lights like this before anywhere else in the country, and I’m well-traveled across some of the more economically deprived pockets.  From the baroque iron filigree work of the stanchion to the acorn shape of the light itself, my guess is this streetlight comes from an inventory that most cities had fully retired over three decades ago.  And there’s probably good reason for that: this one is broken. 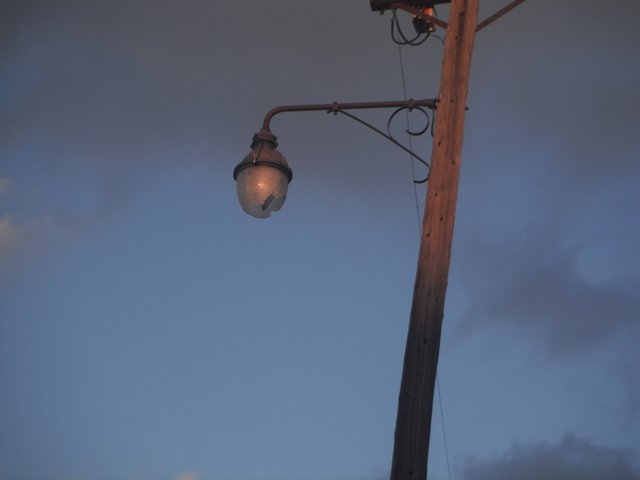 And so is another one half a block away. 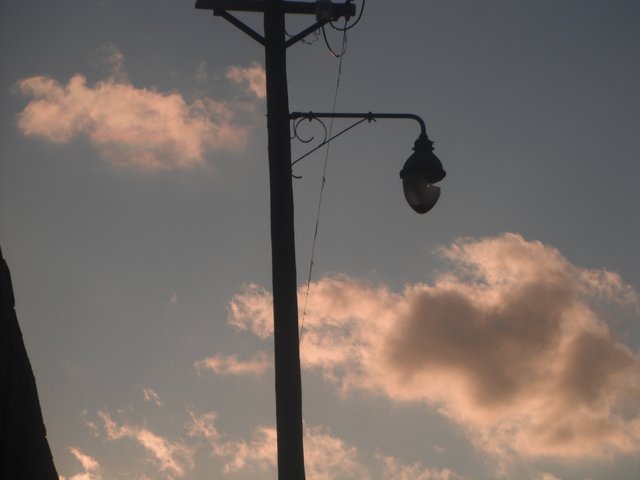 About half of the lights along this stretch of Mack use this design, and most are cracked.  A big distended bulb offers more surface area encased in glass—more space for something to wrong.  Whether hit by flying debris hit or (my suspicion) deliberately smashed by a passer-by, this streetlight is almost definitely non-operational.  And the visible hardware is only half the problem: inside that quaint, clunky bulb (your grandmother’s streetlight) is—or was—a mercury vapor lamp. Detroit is one of the few cities that still depends heavily on this less efficient, increasingly obsolete method of illumination; most other large cities have replaced their inventory with superior metal halide lamps.   USA Today also noted that Detroit and Milwaukee share the dubious distinction of being the only large cities that still deploy series circuits for much of the streetlight network, meaning that if one transformer box breaks down, the whole strip of lights goes dark, like an old string of Christmas tree lights.  While the Mack Avenue streetlight featured above remains attached to a wood, other lights in the city append to metal poles, presumably the same age as the lights themselves, characterized by rust, peeling paint, and sometimes even open cavities at the base.  The whole contraption has seen better days.

But viewing these cracked eggs through a cultural lens can help temper some of the scorn.  They might not work well as modern lamps and they’re much easier to vandalize, but they’re relics—they’re curiosity items.  And they’re particularly eye-catching along Mack Avenue because there are so many of them, yet they’re still interspersed with more contemporary designs.  This cool pic doesn’t win awards for clarity, but it still shows the juxtaposition of old and new streetlights, through their silhouettes. 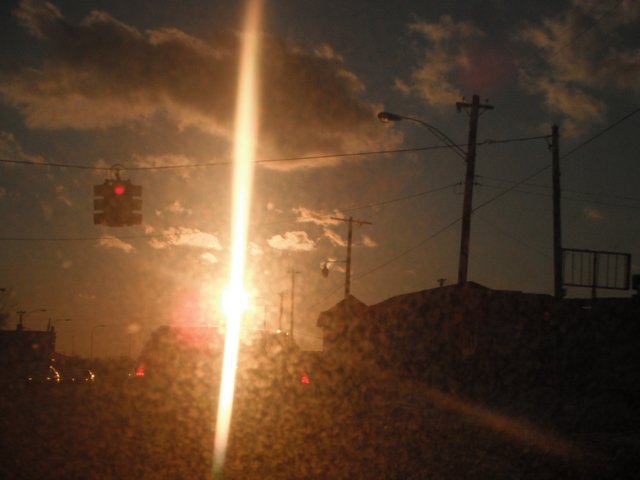 Or on opposite sides of the street. 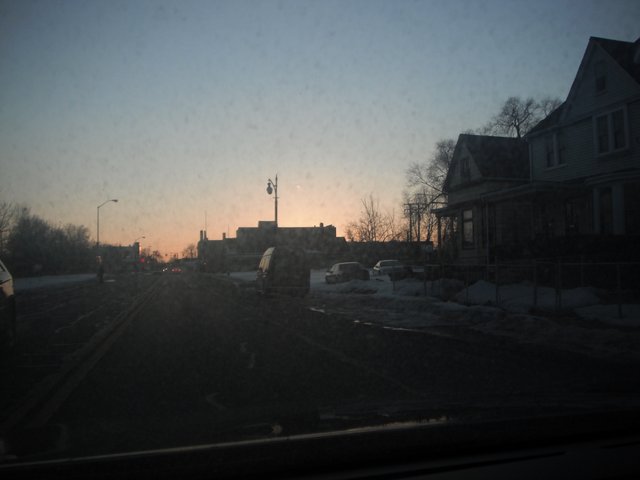 And on a depopulated residential street not so far from Mack, a different kind of lighting style emerges—perhaps not as old-fashioned but still an oddity. 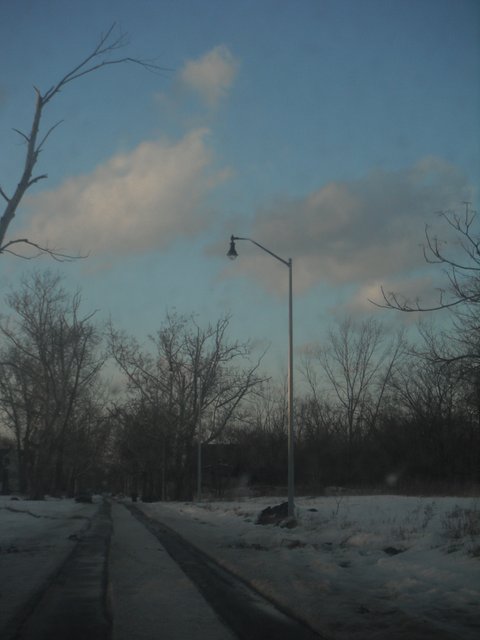 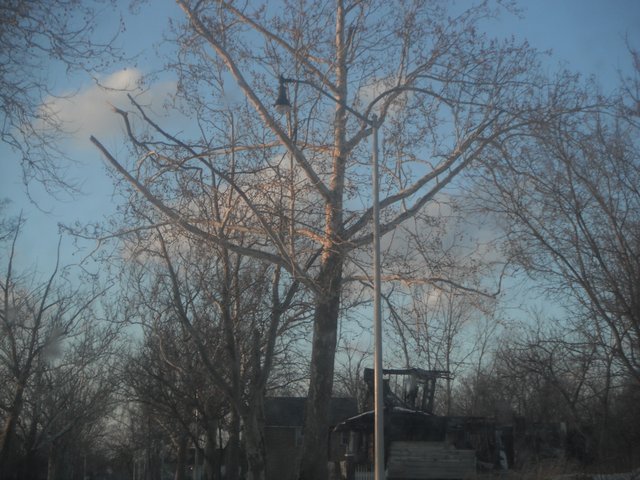 Perhaps a style and technology that never caught on?

The irony of the 1950s-era (or maybe even 1940s) lighting that lingers on in Detroit is that, in a broader spatial context, it exemplifies technological advancements playfully defying shifts in taste culture for a particular design.  On Mack Avenue, ancient streetlights bespeak a broke, ineffective government.  And yet, elsewhere in the metro, they convey something else. 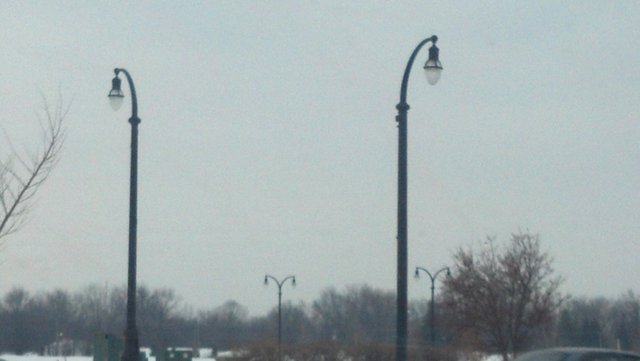 Forgiving the quality of the photo, it’s still easy to see a similar style of lighting to the ones on Mack Avenue, but this time they’re impeccable. 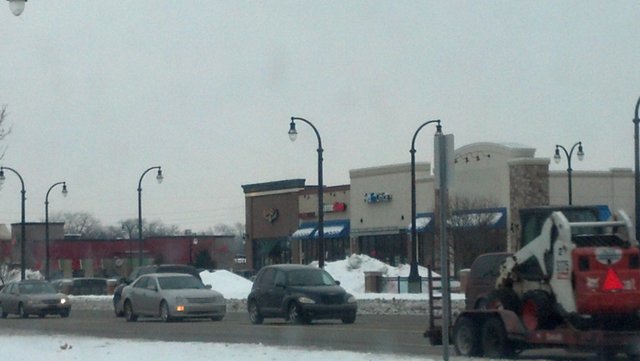 But this is the comfy suburb of Livonia, presumably part of a streetscape improvement along a thoroughly auto-oriented corridor of strip malls and big boxes.  And they no doubt were a deliberate choice from the Public Works Department because they look good—providing a vintage, old-timey feel.  Apparently they don’t worry in Livonia about ne’er-do-well pedestrians throwing rocks as these distended bulbs.  Maybe it’s because Livonia has few ne’er-do-wells….and even fewer pedestrians.  But even some of the economically healthier neighborhoods within Detroit have caught the bug, replacing older streetlights with a newly vintage design, like these twin lamps in Midtown, near Woodward Avenue: 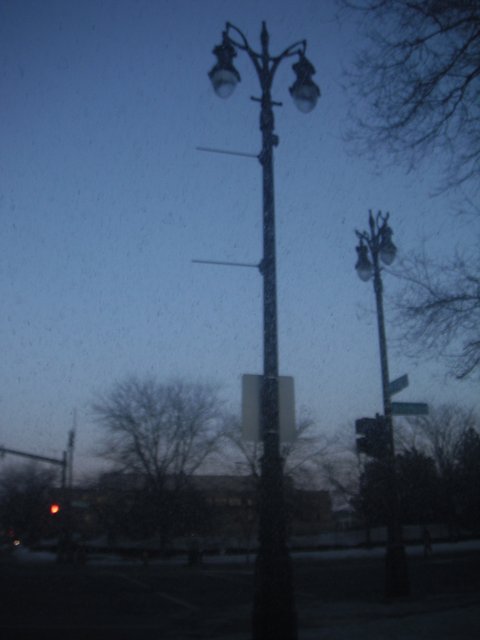 This inversion of taste cultures pervades streetscapes across the country, where everything old is new again, in order to exploit nostalgia among a generation that never really experienced a normative walkable environment—a landscape that was still the standard during the era when city crew first installed those acorn mercury vapor lamps.  We’re seduced by nostalgia and novelty; a hybrid of the two is doubly sweet.  Just go to the French Quarter in New Orleans, where a city equally negligent in modernizing its utilities now capitalizes on this same inertia—the flickery gas lanterns that once were a backwater embarrassment are now ambience.  Detroit isn’t yet so lucky to take similar advantage of its obsolete lighting (and the fact that most streets like Mack are a hodgepodge of styles doesn’t help), but that doesn’t mean that an emergent cultural voice won’t someday call those lights “genuine retro”, and the preached-upon choir will be listening.

The periodic “freshening” of basic urban infrastructure is only partly due to necessity, as it may very well be in Detroit.  But a great deal simply has to do with keeping up with the joneses, resulting in often needlessly costly capital investments.  For example, the standard for pedestrian signals at intersections now typically involves a “countdown” timer, telling pedestrians exactly how many seconds they have left to cross.  While useful, are these timer boxes essential?  Regardless, public works departments are rapidly phasing out the single-box approach for these new timer-boxes, with little evidence of public advocacy one way or another (despite the fact that the public inevitably is paying for most of these replacement costs).  From decorative viaducts to Day-Glo yellow road caution signs, jurisdictions hell-bent on an infrastructural one-upmanship should look to Detroit as an inverse exemplar—what might happen when profligacy goes perpetually unchecked.  Unless, of course, these granny-and-gramps streetlights become hip and cool again, in which case the Motor City might have the last laugh.

PrevPlowing the factories to plant a field.
Retrograde retail: there’s weakness in numbers.Next