The ghost of prosperity’s past.

Pop-up retail can live up to its hyphenated name just about anywhere.  It’s almost like a whack-a-mole (to use another hyphenate).  More often than not, it comes in the form of a good or service that meets a demand over a truncated time frame, such as Christmas tree sales, fireworks stands around the Fourth of July, Halloween decorations, or even tax preparation services around the dreaded April 15th deadline.  Conversely, a disparate, non-seasonal pop-up strategy provides fledgling entrepreneurs with the chance to cut their teeth in a storefront, while at the same time securing a short-term tenant for what otherwise might have been a perpetually unoccupied space.  My current home of Detroit deploys this second practice as an economic development strategy, typically in older, pedestrian-oriented retail in more urban settings.

Returning to the ‘burbs, I blogged about the pop-up phenomenon a few years ago, when a temporary costume shop had leased a space on the south side of Indianapolis, whose previous long-term tenant was the defunct electronics chain Circuit City.  Needless to say, the Halloween USA store closed within a week after October 31.  More recently, I witnessed another pop-up manifestation in Anderson, Indiana that surprised me far more than it probably should have: 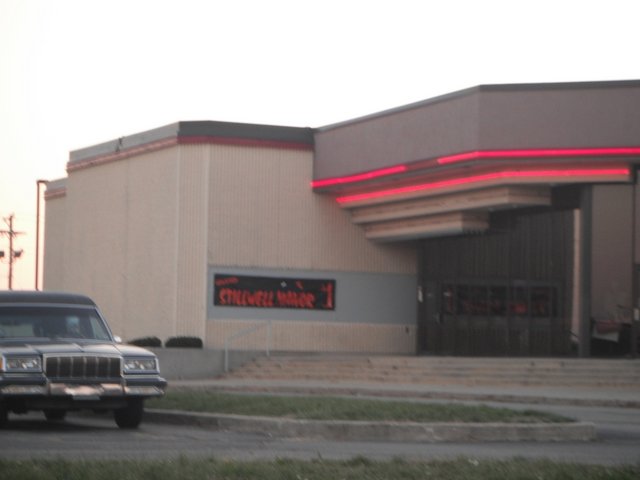 My apologies for the poor quality of the photo (it seemed fine when I took it), but for those who can’t read the black-and-orange sign, it says “Stillwell Manor”.  So what is Stillwell Manor?  Here’s a better photo that should clarify. 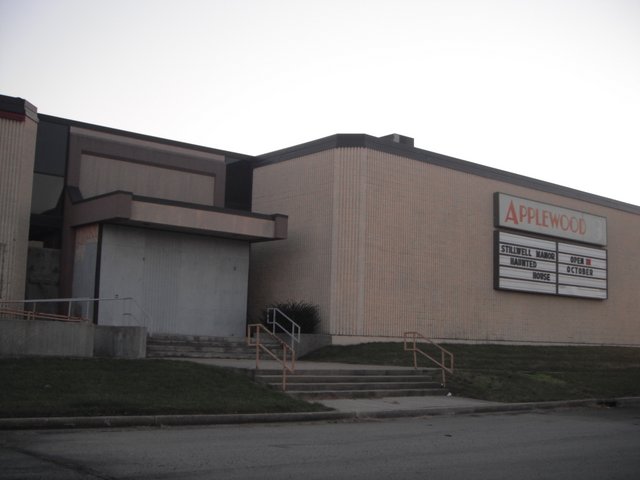 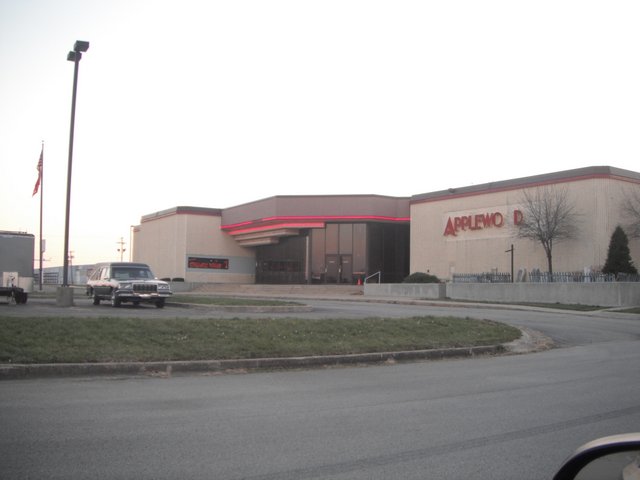 It’s a haunted house that occupied a movie theater, obviously.  I particularly liked the makeshift Styrofoam cemetery to the right of the entrance. 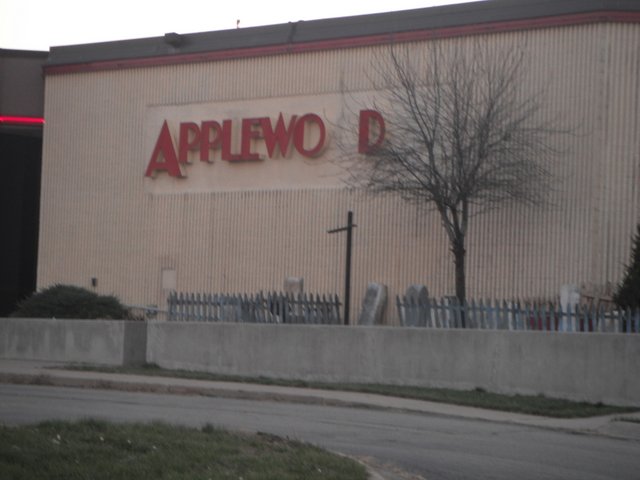 It’s not the first time I’ve encountered a pop-up haunted house occupying vacant retail space; an old department store in Effingham, IL had suffered a similar possession in a blog post last year.  But it had never occurred to me that a movie theater would serve as a suitable space to deliver Halloween-themed scares; I guess it shows how adaptable these seasonal uses can be.  It’s ironic that virtually all seasonal haunted houses occupy schools, strip malls, Elks lodges—virtually anything and everything but actual private homes.

A little research reveals that the Applewood Cinema was a mainstay in Anderson for about 20 years.  Poised where the city’s primary auto-oriented commercial thoroughfare, Scatterfield Road (State Road 9), meets Interstate 69 at an interchange, the cinema should have thrived on visual prominence alone, since tens of thousands of motorists pass by along the busy interstate every day.  However, an Anderson Herald-Bulletin article reveals that not only did Applewood close back in the spring of 2008, but it had operated as a “sub-run” theater for several years, showing second-run movies at a discounted price.  In other words, the cinema gradually downgraded to its current condition.  Since its closure, moviegoers in this persistently economically struggling city 50 miles northeast of Indianapolis have had only one option: the ten screens at the city’s Mounds Mall.

All too often our prevailing cultural voices seem to equate pessimism with pragmatism, and I hate to add another.  But it’s hard not to speculate that Applewood Cinema’s only valid life is as a haunted house for one month of the year, and it sits vacant the other eleven months.  (Needless to say, we can add an ironic voice to the cynical chorus, since the folk-culture influences that spawn haunted “houses” routinely depend on abandonment—exactly the fate Applewood has suffered.)  After all, multiplexes such as Applewood offer an architectural form that does not adapt easily to other uses—a serious contrast to other big-box stores, which usually feature a uniformly boxy, flexible space.  About the only other use I’ve seen for an abandoned movie theater was as a church, in an outparcel near the long-struggling Lafayette Square Mall (a minor observation within a lengthy blog post), but even then, I’d imagine the repurposed “sanctuary” only comprises one of the many theaters within the multi-screen facility.  The unused theaters continue to languish.

Back in October 2009, I speculated what the future of pop-ups might be in a culture where retail is increasingly retreating from the physical world and dominating virtual/online commerce.  More and more retail structures will struggle to find tenants, and the available space vastly outnumbers the private enterprises that lease them.  Here’s what I projected would happen in smaller cites…like Anderson:

Smaller cities and larger towns with high retail vacancy may witness pop-ups as a status quo. In less diversified economies that are highly susceptible to recessions, major retailers may remain unconvinced that a long-term lease is a wise commitment. Such communities (particularly cities under 50,000 inhabitants) may find they no longer inspire confidence for expansion of big box retailers like Home Depot or Petsmart; instead they get scaled down, temporary versions of such vendors until the economy improves. Bricks-and-mortar investments are simply not worth it if the trade area holds no promise of long-term stability, yet towns and cities of this size still suffer an abundance of vacant retail space that strives to be filled, even if only for limited time frames.

A financially struggling minor city like Anderson hosts a pop-up haunted house for one month each year along Scatterfield Road, while Andersonians now must drive much further—to the northern suburbs of Indianapolis, for example—in order to see second-run, discounted movies on the big screen.   And apparently they’re willing to do this, since no one else has tried to re-activate Applewood as a multiplex.

I feel more confident now that pop-ups will dominate the Andersons of the world.  While this doesn’t augur well for the stability of commerce in these regions, it doesn’t have to be a negative.  After all, pop-ups may prove the modern solution to high vacancy (as they often are in Detroit), and they certainly portend the persistent evolution of retail typologies, resulting in buildings that will either undergo renovation routinely to stay new and fresh-looking, or they will atrophy in obsolescence.  But the proliferation of pop-ups also means that Andersonians will have ever fewer options to shop close to home.  Then again, they’re probably staying home and ordering online, while streaming the movies to their man caves and basement entertainment centers…just like people are in cities big and small, middling and prosperous.

PrevA signal to retreat to the suburbs? Too late.
Meditations on the Marott Center.Next