A signal to retreat to the suburbs? Too late.

Scattered throughout various locations throughout the City of Detroit, one is likely to run into this unusual sign. 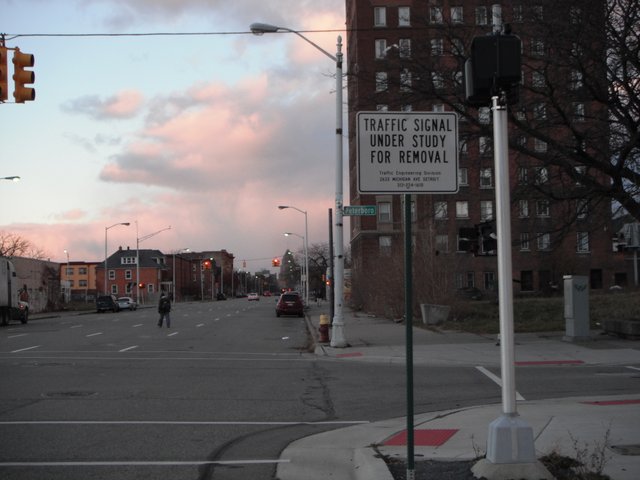 It may be unusual in almost any other urban area, but not the Motor City.  In due time, the city could end up removing this traffic light at the intersection of Peterboro Street and Second Avenue altogether.  It stands just a little over a mile from Campus Martius Park, this absolute center of downtown.  But why would the City’s Department of Public Works consider removing a traffic light in an area so close to highest concentration of jobs and workers?

It’s not rocket science.  This intersection no longer endures the volume of traffic to justify a stoplight.  Or, at least, the City is pretty sure it doesn’t.  Curbed Detroit featured an article on this assessment much earlier in the year http://detroit.curbed.com/archives/2013/01/traffic-map.php .  In many regards, it’s not too surprising, given the hierarchical importance of these two streets.  Second Avenue would most likely qualify as a collector, an intermediate street that does not provide the length or support the volume of vehicles that a more prominent arterial would (such as Woodward Avenue).  Meanwhile, Peterboro Street is little more than a local road, just four blocks in length and not intended to handle any major traffic beyond access to residential quarters.  The Google Map below better demonstrates this relationship. 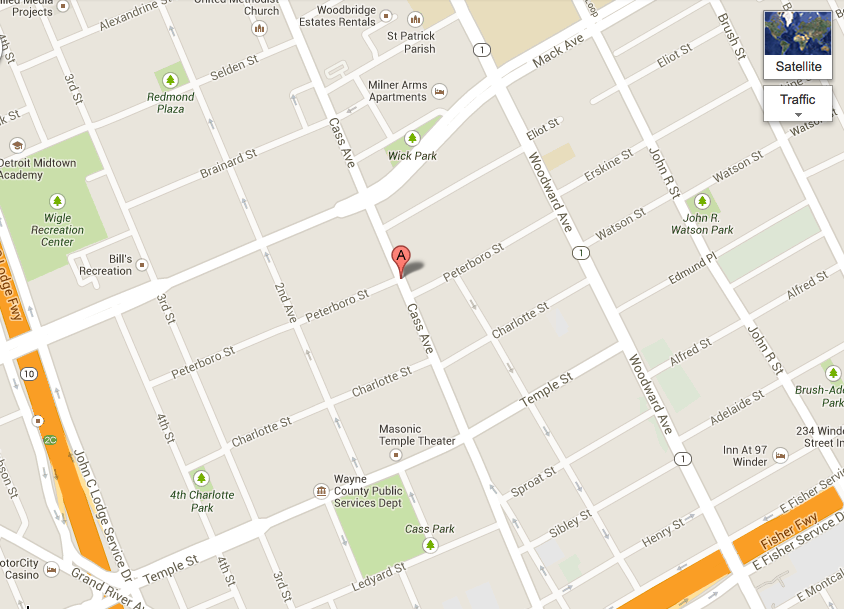 Detroiters know that Second Avenue is hardly a street on par with Woodward, just three blocks to the east; it terminates just a few blocks to the south, at Temple Street and Cass Park.  And Peterboro, the cross street, is only four blocks long.  Considering the built environment in the area today, its hard to conceive of a time when the density of commerce and vehicles was ever enough to warrant a stoplight here.  But, in many regards, that is the marvel of Detroit.  Here’s a clearer view of the intersection looking northward down Second. 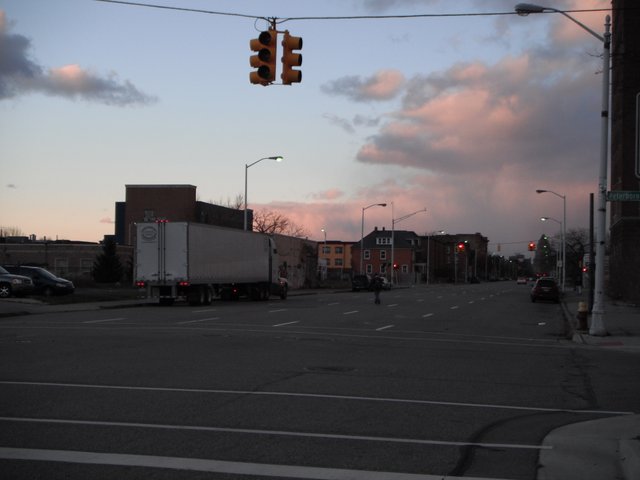 One could make excuses for the general feeling of emptiness, considering that I took these pictures in the late afternoon on a Saturday.  But judging from the absence of major buildings flanking either side of Second Avenue, is there any reason to believe these lanes (all one-way northbound) are ever congested?

Historically, one of Americans’ favorite gripes about their respective cities is the snarling traffic problem, indicative of streets that no longer have the capacity to handle the vehicles that pass through.  However, even the most ardent pro-car stalwart (and the Motor City has more than its share) would have to argue that Detroit’s roads suffer the opposite capacity issue.  Simply put, these streets don’t handle nearly the magnitude of traffic for which their designers originally anticipated and intended.

Both Michigan DOT and Southeast Michigan Council of Governments (SEMCOG) offer reports on Annual Average Daily Traffic (AADT) counts.  SEMCOG, with a smaller geographic focus, also seems to offer much greater detail in its AADT research.  For example, this table provides the AADT for Peterboro Street west of Second Avenue, part of the intersection featured in the above photographs.  At 380, the number doesn’t seem that high even without a comparative context.  After all, this is only a mile from the absolute center of Detroit, and much less from what would generally pass at Detroit’s downtown.  Compare it with the AADT of other street segments of this very minor street and it’s clear that only two intersections involving Peterboro can even expect 1,000 cars to pass by in a 24-hour period.

But it gets worse.  Compare this with an intersection between a collector and an arterial a quarter-mile closer to downtown, for example: 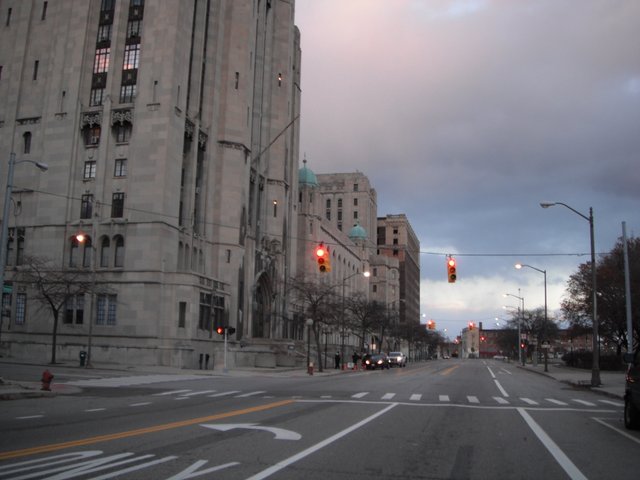 This photo looks eastward on Temple Street at the point where Second Avenue terminates, visible on the left, with the mammoth Masonic Temple immediately behind it.  Just in the distance are two more intersections with stoplights.  The purple circles in the map below indicate the locations of stoplights on Temple. 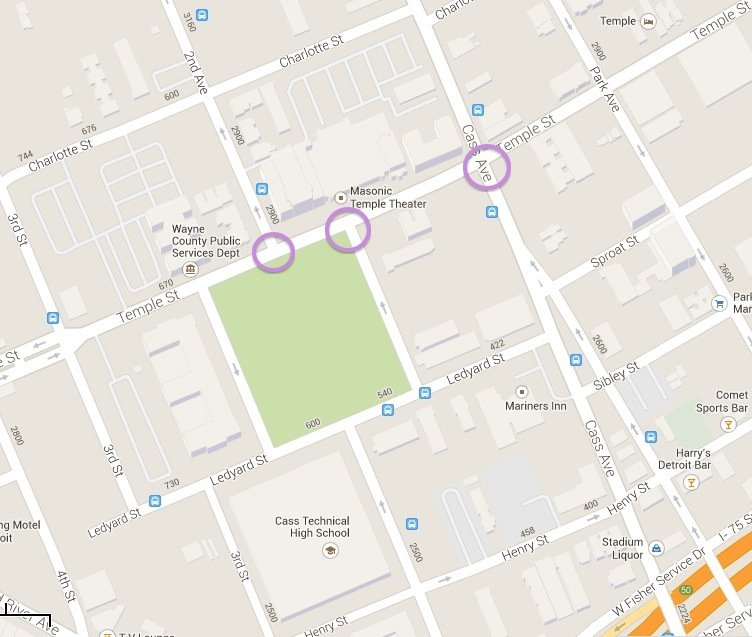 It amounts to one of the most excessive traffic light schemes I’ve seen in any major city center.  Because the two segments of Second Avenue are non-contiguous, they cannot share a stoplight.  However, in this instance, not only is the traffic volume insufficiently heavy to demand stoplights, but the flow of the traffic further weakens the need.  In the photo below, I’m standing between the two intersections (represented by the purple circles to the left and center on the map), looking eastward. 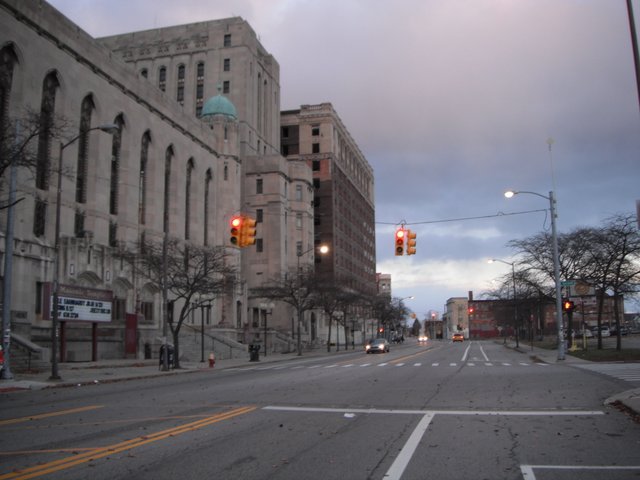 This stoplight regulates traffic on a segment of Second Avenue that is just one block long and only one-way northbound.  Thus, the light exists only for vehicles leaving Second Avenue onto Temple Street; no cars from Temple can turn.  Why isn’t a mere stop sign sufficient?

The signal at the other intersection (the farthest purple circle on the left) is even more unnecessary. 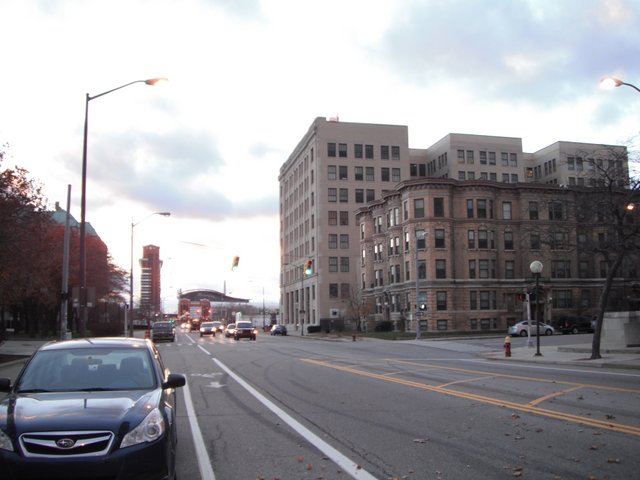 The stoplight directs traffic between Temple and Second, but yet again, Second is a one-way northbound street.  Thus, a stoplight exists only for vehicles leaving Temple to turn onto Second; no cars can legally travel the other direction.  Since westbound cars on Temple only need to turn right to enter onto Second, they would not need traffic regulation under any circumstances.  The stoplight only regulates cars turning left—no other purpose.  If these were high-traffic streets, some other form of management might be useful.  But remember what Second Avenue looks like: 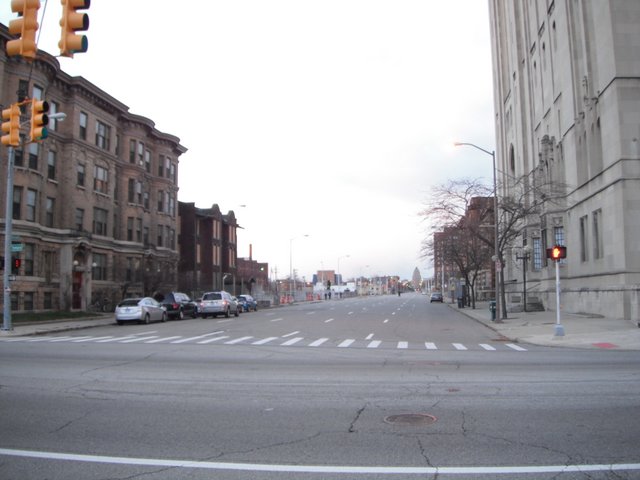 I will concede that the Masonic Temple, as a performing arts venue and meeting space, can bring reasonable crowds when a show or indoor festival is in town. 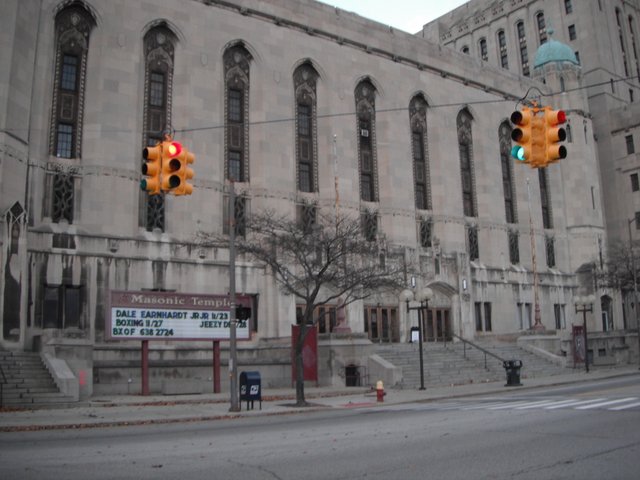 But in a city with numerous magnificent theaters, the Masonic Temple doesn’t really dominate the scene.  It rarely hosts an event more than three nights a week, and while these can get crowded, does a street really need stoplights for just a few hours here and there?  After all, whether urban, suburban, or rural, one typically expects at least a little bit of traffic bottlenecking when a major show lets out.

I’m hardly the first to advocate for high-speed traffic flow as an easy remedy, especially in urban settings where numerous pedestrians could be present.  But the conditions for motorists along this stretch of Temple Street are almost comparable to waiting in line for a ride at Disneyworld.  Cars along Temple Street lurch only 100 feet from one stop light to the next, while waiting for absolutely nothing.  The lights aren’t timed to expedite flow, so it is common for a car to stop at all three intersections represented by the purple circles.  Worst of all: these lights are not under any study for removal…yet.

This predicament may seem minor in a city that has lost over two-thirds of its population since its peak (and is continuing to hemorrhage in most neighborhoods), but it is an inevitable consequence.  The lower east side of Detroit, home to some neighborhoods that have lost over 90% of the population from the 1950 peak, has none of these “removal” signs.  No decommissioned stoplights planned, although the condition of stopping at lights for no reason is ubiquitous on that side of town.

As a result, the fact that the Department of Public Works’ Traffic Engineering Division is assessing the possibility of removing traffic lights seems like lemonade out of lemons.  Not only is it good for people getting around by car in the Motor City, who won’t suffer the inefficiency of stopping at lights that no longer need to exist (a Pareto optimality under just about any argument that comes to mind).  The win-win resolution prescribed here may seem out-of-touch with the broader concerns of job loss and concentrated poverty, but any bankrupt city that needs to divest of some of its most fulsome assets (and their associated operational costs) will inevitably have to confront the phenomenon of traffic management in an environment that no longer handles much traffic.  Even if the City sells its tri-color portfolio to fast-growing metros that need them, it will probably only amount to a drop in the bucket when it comes to reducing some of the catastrophic debt.  But this strategy is both relatively easy to implement and unlikely to generate the sort of controversy that one might expect from, say, stripping the Detroit Institute of Art of its collection.  One final aspiration: that the Department devises a tactic so that a single “study for removal” doesn’t cost more than the value of the intersection’s stoplights themselves.

PrevAnd on the seventh day…He created a market.
The ghost of prosperity’s past.Next