Time to shake hands… now that you’re on your way out the door.

While traveling one of the main thoroughfares in metro Detroit, I came along this modest little billboard. 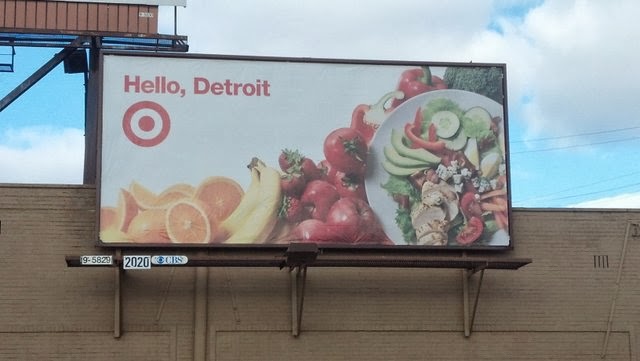 I call it modest because the one behind it and above it—of Detroit’s omnipresent powerhouse litigator Joumana Kayrouz—is a little bit bigger. 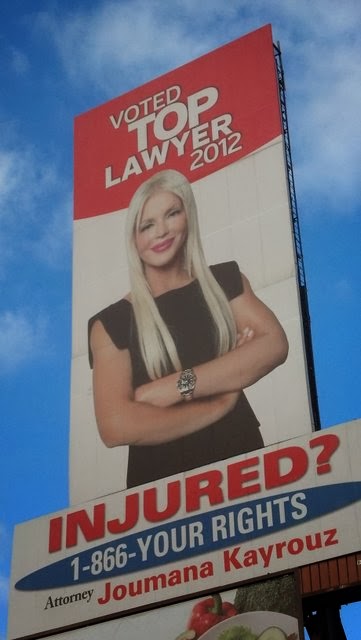 In fact, from a moderate distance, Ms. Kayrouz not only dwarfs the Target Corporation, but the tree’s branches almost completely obscure the minor billboard. 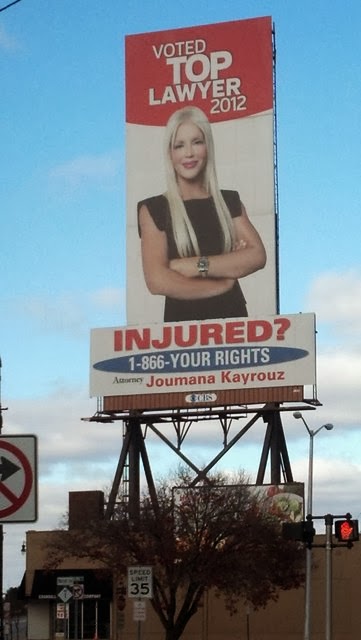 Still, for the purposes of this meditation, this Target ad is more compelling, if a lot less assertive.  Sure, it’s nothing much to look at, but, as is often the case, the context is what really matters.  The billboard says “Hello Detroit” while featuring a bunch of fruits and vegetables.  Okay—no big deal.  To some extent, it makes perfect sense; the sign stands at Eight Mile Road and Woodward Avenue, the widely-known, almost mythologized boundary between the big city and its affluent northern suburbs.

What’s so special about this billboard?  Well, it sits at the north side of Eight Mile Road, in the suburb of Ferndale.  Not the city of Detroit at all.  Here’s what you’d see if you pivot 180 degrees. 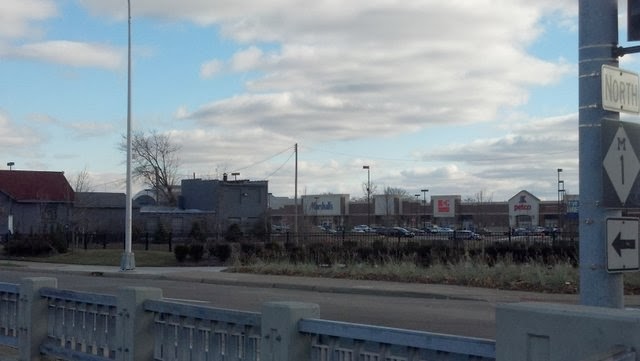 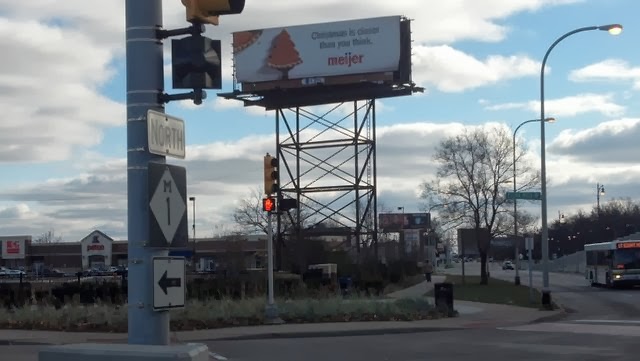 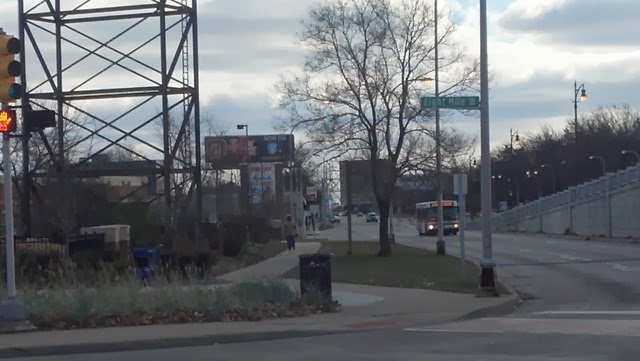 On the opposite (south) side of Eight Mile Road sits the one and only Detroit location of a Meijer, Michigan’s highly successful alternative to Walmart.  This Meijer, which only opened earlier this previous summer, represented a coup for the Motor City, since it anchors a large shopping plaza that appears so far to be successful, thereby figuratively (and possibly literally) representing a much-needed infusion of taxable commercial real estate for a city that is revenue-starved, to put it delicately.

It still baffles the senses to see a “Hello Detroit” sign precisely targeting motorists as they leave the Motor City.  More likely than not, it is implicitly greeting Detroiters arriving in this suburb, welcoming them to the bounty of shopping available in wealthy Oakland County (including many Target stores).  But a huge proportion—perhaps a majority—of the people seeing this billboard are returning to their suburban homes after a commute from the big city’s downtown.  Otherwise, it is essentially bidding salutations to true-blue Detroiters—that same population that the suburbanites have been steadfastly fleeing for sixty years.

So is it fair of me to draw blanket conclusions about the prevailing sentiment fueling America’s 14th largest metro from a single billboard?  Of course it isn’t.  Still, it easily hints at something the Target Corporation seems to speculate about its regional consumer base: that Detroiters’ identification with their beleaguered city has grown increasingly untethered from the clearly defined political boundaries.  Hundreds of thousands of commuters pass this billboard daily, returning home from work, and most probably think nothing of it.  They are figurative Detroiters, even if they’ve never hung their hats in the city limits.  Even if they live in Auburn Hills or Brighton (25 and 30 miles from the outer Detroit border, respectively), Detroit is most likely where they’d claim they’re from if they encounter someone from Boise or Bradenton.

This ostensibly split personality doesn’t distinguish Detroit.  Virtually every large metropolitan area operates under similar conditions. As an economic engine, the core city of Michigan’s largest metro may sputter as it runs on seriously diluted oil, but the psychological centrality of Detroit (or Cleveland or Pittsburgh or Salt Lake City) remains the primary point of reference for the majority of Americans who have never heard of Auburn Hills or Brighton.  And Detroit might not even be an oddity for the share of its metro that lives outside of the city limits: the change in US Census parameters for metro areas between 2000 and 2010 makes it difficult to cross-reference, but rough 2010 estimates indicate that about 16.5% of those living in the MSA call the city home, a rate higher than similar former industrial strongholds such as Pittsburgh and St. Louis, where 12.9% and 11.4% of the metro residents live within the core city limits.

But the world hears much, much more about Detroit’s woes these days.  And even if dozens of Rust Belt cities continue to endure declining populations and tax bases, the only ones that can claim something on par with Detroit’s staggering 25% drop from 950,000 to 710,000 between 2000 and 2010 are places like Gary, IN (21.9%), East St. Louis, IL (14.4%), Cleveland (17.1%) and Youngstown, OH (18.3%) and Detroit’s neighbor Flint (18.0%).  Nonetheless, a first-grader could still point out that all of these numbers are lower than 25.  And, to Detroit’s detriment, the percentage of 25 has its own semantic equivalent that, denotatively, sinks like a stone: “Detroit lost one quarter of its population in the last decade!”

Truth be told, the marketing team at Target probably thought nothing of leasing this advertising space, nor did CBS, who owns the billboard.  For me to infer both an underlying motive or some broader sociopolitical implications is more an indication of my own hyperanalytical zeal than any true issues at hand.  But it’s hard to fathom that no one considered the irony of a Detroit greeting standing just a stone’s throw from the actual municipal boundary—especially considering that this city of 700,000 people does not contain a single Target, nor is there evidence that it can expect one any time soon.  I can only guess if Target’s generally very savvy marketing campaign would plop a similar billboard ad right outside the boundary of any other American city.  Or whether Meijer would dream of doing the same in Detroit.  At least Meijer voluntarily opened a new store branch—in the Motor City limits, no less.

PrevSharpening the Cut.
And on the seventh day…He created a market.Next

3 thoughts on “Time to shake hands… now that you’re on your way out the door.”