Even if it’s not a commissioned piece like the mural from my previous post, the landscape of artistic expression in Detroit is rich.  Since such a huge portion of it comes in the form of graffiti—which is almost always by definition an act of vandalism—it’s understandable that my opening sentence might carry a whiff of irony.  But any city that loses nearly 70% of its population will inevitably contain within its jurisdiction a large amount of unmaintained space.  In Detroit, such space includes both raw, formerly developed land as well as vacant structures.  Abandoned buildings may comprise the most conspicuous acts of graffito, but sometimes one can find it in unexpected places, like this water tower. 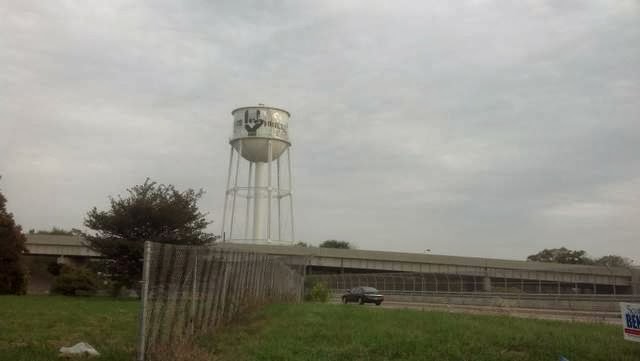 Pondering it a little more deeply, it’s no surprise that the tank became a canvas.  It presides over a difficult-to-access, largely depopulated neighborhood near the intersection of Dequnidre Road and the Davidson Freeway.  Typically, the area probably doesn’t receive a great deal of monitoring, so it would be easy to sneak around and make it up the ladder to the tank.  In addition, the tank stands only a few hundred feet away from a very prominent location, the I-75 corridor, so thousands of motorists pass by it daily.  For a typical vandal, this tower is a dream come true: a clandestine site for execution that will offer a big payoff in terms of visibility.  But what about the artwork itself? 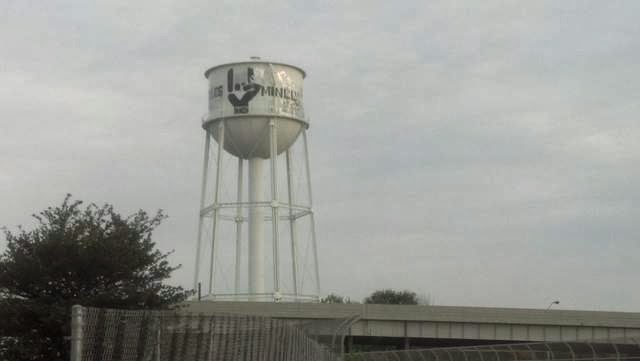 It looks like a monochrome hand in a popular gesture, in which the thumb holds down the ring and middle finger, while the pinky and index finger remain elevated—the sign of the horn.  While it carries many other connotations, from warding off bad luck to cuckoldry, the most common and enduring connotation in the United States is a sort of good-natured expression of solidarity within heavy metal and headbanging subcultures—certainly the more likely implication in a northern industrial city like Detroit, when compared with its other well-known signifier, the “hook ‘em horns” rally at University of Texas at Austin.

A closer look, however, suggests that the painting wasn’t always so whimsical. 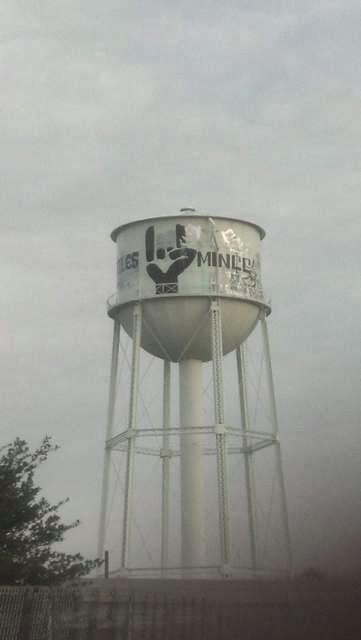 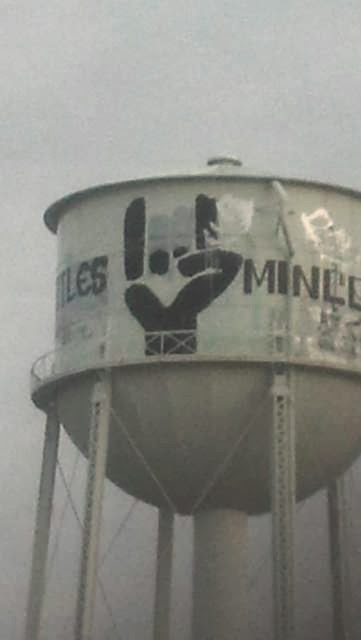 Someone painted over the upper half of the middle and ring finger, using an almost identical color to the tank of the water tower, thereby more or less blotting them out.  What this means is the original gesture was a raised fist.  And though it, too, carries a variety of implications, nearly all of them include a degree of political protest—a gesture of collective revolt against an oppressive authority.  By “whiting out” the original graffito, the second vandal muted and, by large extent, trivialized the original message.  If the original full fist embodied the iconic “black power” salute, it is possible that the actions of the second vandal is demonstrating a counter-protest toward black power, which, by nature of reducing it to a adrenaline-fueled rally for “rock ‘n roll!”, some might construe as belittling racism.  Simultaneously, others perceive the defiance implied by the black power raised fist to perpetuate racial differences that are inherently prejudicial and divisive in nature.

I’m not going to fan the flames any further, because I can’t begin to know what the original intent was, nor that of the palimpsest the followed.  While it could demonstrate the broader implications of racial tension in Detroit, it might simply reveal little more than two graffiti artists who had differing visions for a water tower.  Since neither artist had any vested right to paint this tower, it’s always fair game for another person to destroy the original aesthetic message, and it’s possible that someday a third will recover the original of solidarity in political protest—or turn it into something unrecognizable.  That at least two artists treated the tower as their canvas has less to say about the content than about the level of supervision over this part of town.  It’s not that common to find vandalized water towers, because in most places you simply couldn’t get away with it.  Detroit is clearly different in that regard.  And while Detroit’s distinction might not say much about the City’s prevailing ability to fight property crime, it certainly punctuates the landscape visually with a density of self-expression we’re not so likely to see in, say, Disneyland—or Manhattan, for that matter.