In certain subcultures, it’s become a meme.  But it took me a little while to catch on. Only after driving past this curiosity for three consecutive days did I realize what it was.  It’s not exactly showy, but that’s the point.  Look slightly to the left of the center of this photo, and it should be clear what I’m referring to. 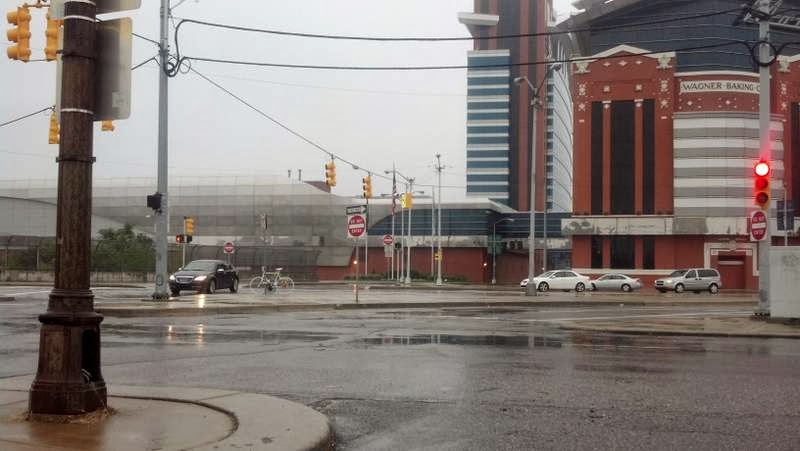 Since it really doesn’t jump out, a different angle and better weather might help. 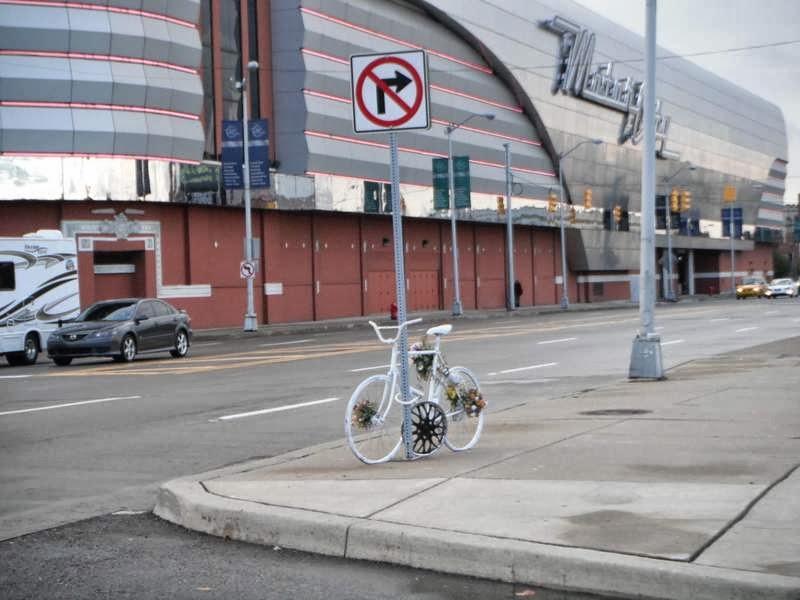 Yes, it’s a fairly standard ten-speed, only painted all in white.  It’s a ghost bike—a spartan memorial to someone who was killed or severely injured while bicycling. According to the Ghost Bikes nonprofit site, St. Louis christened the first ghost bikes back in 2003, but it has spread to hundreds of locations all across the world, nearly always as a tribute to someone struck by a car.  Usually the accident took place at or near the location where the memorial stands, and frequently the dedicators deploy an already damaged bike, to intensify the mangled effect of the collision.  Sometimes the installers remove the tubes from of the tires in order to deter theft.  In this Detroit example, the bike leans against a traffic sign on Grand River Avenue and Temple Street, right in front of the Motor City Casino.

As is the case with many ghost bikes, other passers-by have inserted flowers and scribbled messages onto the enamel. 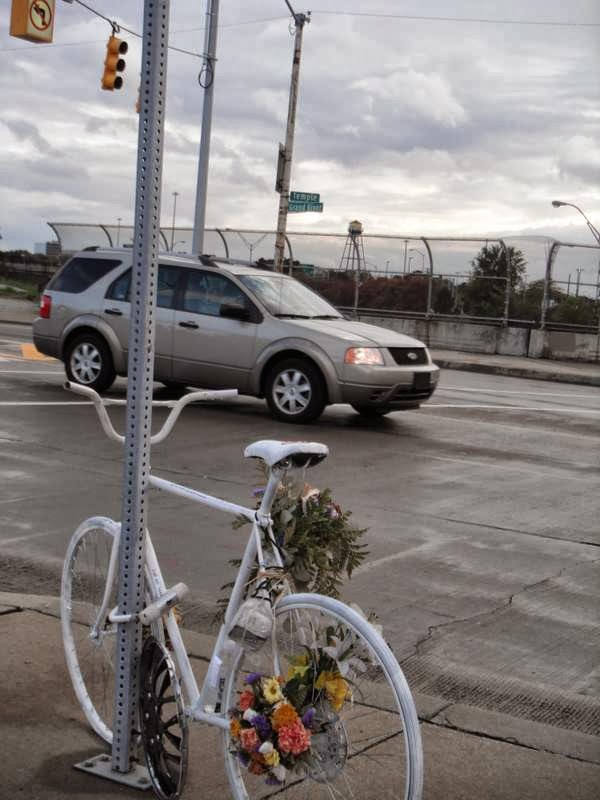 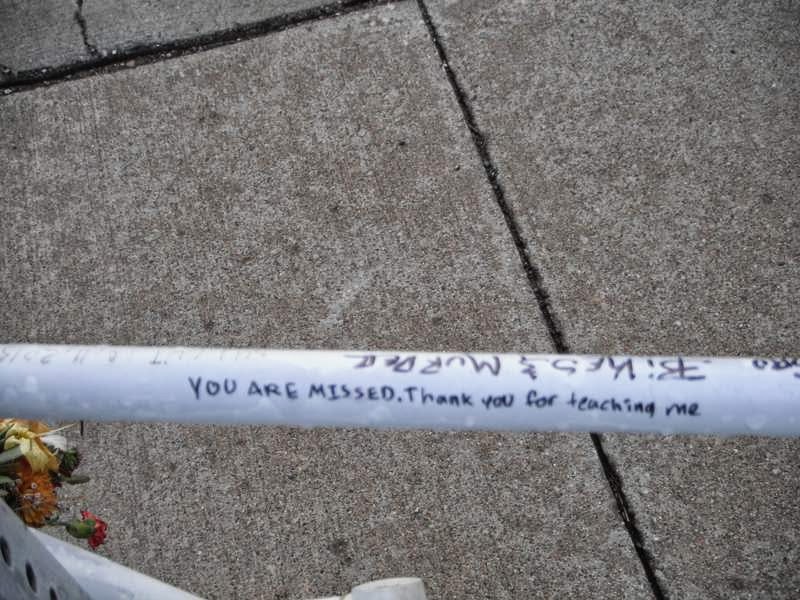 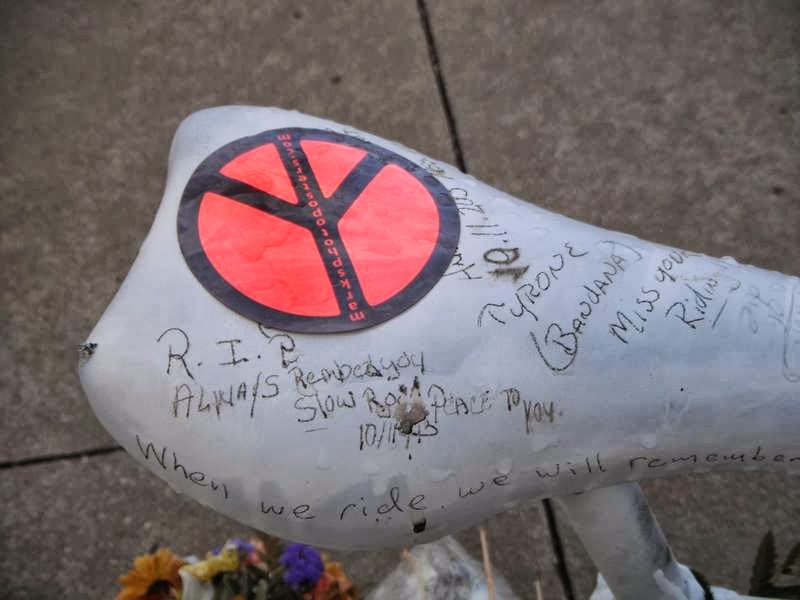 And, not surprisingly, I’m not the first to capture this discovery.  One of the more prominent local urban advocacy websites seems to have taken notice just a day or two after the installation.  Hub of Detroit created the memorial to honor Hal Williams, who died last month following a hit-and-run collision, purportedly along the same segment of Grand River Avenue as the site of this memorial.  Incidentally, a Detroit City Councilman’s son was hit on his bike at this exact intersection in 2010.  Though the councilman’s son did not sustain life-threatening injuries (not doubt abetted by the solicitude of the driver, who stopped that time around), the fact that multiple accidents have taken place along this stretch of Grand River prompts one to question the overall safety level for bicycles at this part of town, or this intersection in particular.

Even a Google Maps view suggests that this intersection is a doozie. 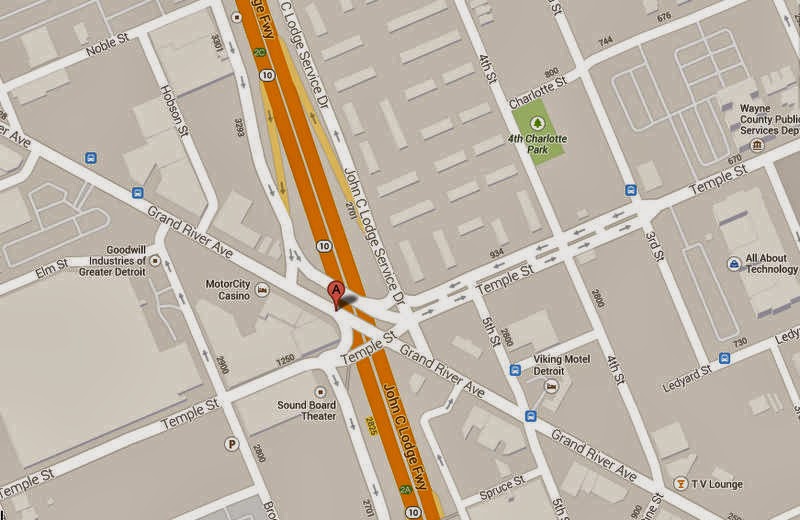 It’s essentially three-way, except that the bi-directional John C Lodge Service Drive straddles both sides of a below-grade State Highway 10 (M-10), which operates as a limited-access freeway throughout the Detroit city limits.  And Temple Street is particularly confusing: contrary to the appearance on the map, the motorists traveling eastbound from the west side of M-10 can fully cross, but those on the west side of Temple heading eastward (toward the Motor City Casino) cannot completely traverse this intersection.  A good portion of the traffic uses this intersection as ingress or egress from M-10 (Lodge Freeway), and an additional service ramp loops across (parallel to Temple Street) cutting through the intersection in an opposite flow that one would expect (the left side of the road) in order to continue access on the south side of the portion of Temple separated by a median.  If this description seems baffling, one can imagine how it would appear to any bicyclist or motorist unfamiliar with the intersection.  The photo below at least provides a hint of the sort of “Charlie Foxtrot” situation that this intersection inflicts upon its users. 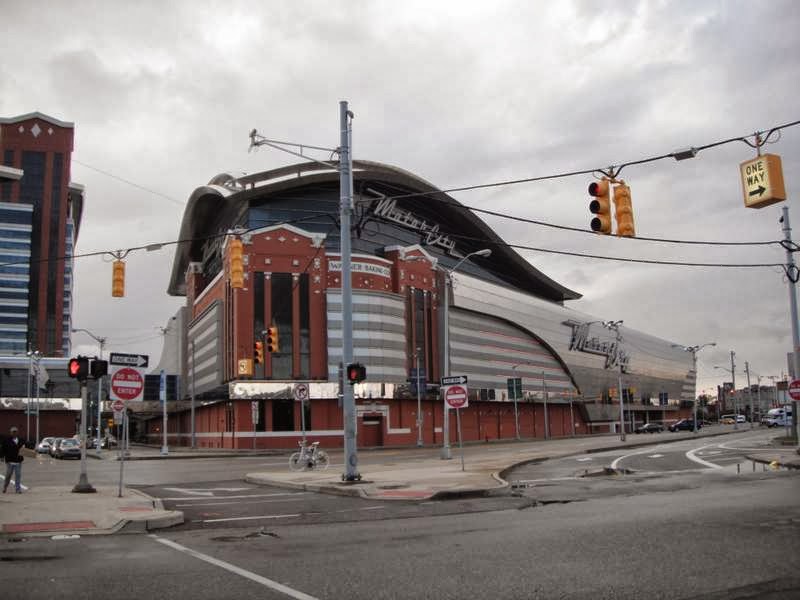 Ghost bikes could serve as a sobering reminder to passers-by of the risks that bicyclists assume when maneuvering in urban environments with fast-moving automobile traffic.  They could prove particularly effective in reminding motorists to proceed with caution in already complicated, high-traffic intersections like Temple and Grand River.  But unfortunately my inner grammarian impels me to use epistemic modal verbs in the previous two sentences, because I don’t yet think ghost bikes are achieving their goal.  They could someday.  But if a website exists to track them, they clearly aren’t that widespread.

Sure, we don’t have nearly as many bicyclist fatalities as we do of motorists; after all, not very many people ride bicycles in the US.  But one far bigger hindrance to the visibility and viability of ghost bikes is that they rarely survive long.  Floyd Reeser of Bike Saviours, a nonprofit community bicycle education center in Tempe, observed that ghost bikes rarely last more than a week, while officials in the Arizona city were finalizing a measure limiting the placement of roadside memorials in the public right of way to 90 days following a fatal accident.  Tempe officials agreed in June to work on a relocation of two ghost bikes, divorcing them from the accident sites but preserving their commemorative integrity.  Meanwhile, the New York City Sanitation Department announced that the “eyesores” had to come down after receiving numerous complaints about the ghost bikes, though the department is giving families of loved ones a 30-day grace period—25 days more than typical abandoned and derelict bikes receive. For those who think this callousness is stereotypically American, the City Council recently ordered a family to remove a ghost bike in Hackney, UK.  And a ghost bike just north of Dupont Circle in Washington DC managed to survive a year as a tribute to a young woman hit by a garbage truck in 2008.  This particular episode amplifies the poignancy of ghost bikes for me.  I remember this accident, since I biked across the exact same intersection and through the often-terrifying Circle every day on my way to work in Georgetown that year.

These interventions are among the more courteous.  Most cities remove the ghost bikes with little to no notice.  The only reason this might attract greater attention is because the public sector usually accords another grassroots memorial much greater respect.  We’ve all seen wooden crosses or miniature gravestones along the road to commemorate a life lost in an automobile accident.  Ghost bikes are little more than a semantic subset, specifically indentifying individuals killed while bicycling.  But to remove a wooden cross—or even to complain about it—borders on blasphemy, while petitioners routinely campaign for the successful removal of ghost bikes.  What’s the difference?

I attribute it to several factors.  Obviously bicycles are much larger, and they can legitimately impede a right-of-way in a manner that few roadside graves ever will.  Ghost bikes are far more likely to inhabit urban settings, where the higher population density engenders a higher propensity toward complaints.  But neither of these excuses is entirely fair to ghost bikes, since other memorial graves can be large and ostentatious; meanwhile, ghost bikes could just as easily commemorate an accident in a rural setting.

My suspicion is that the multitude of implied uses to bicycles serves as a liability to the proliferation of ghost bikes.  Obviously the most common function of a bike is as a means of transportation.  So when one remains planted at one site for weeks or months at a time, the public often draws the conclusion that it is abandoned, regardless of an alabaster coating.  Meanwhile, grave markers serve a discrete semiotic purpose: to memorialize—nothing else that I’m aware of.  We see a wooden cross or a flower-embellished placard along the road and we know exactly what it means.  No one has the gall to refer to them as “eyesores” because they fundamentally cannot become abandoned, no matter how aged and deteriorated they might be.

The connotations to a long-parked bicycle are never quite so clear, and ghost bikes suffer as a result.  Since they’re a relatively new phenomenon, maybe time will grant them the same respect that wooden roadside graves enjoy. But the need for widespread public education on ghost bikes references something far more critical: a superior public understanding of how vehicles and bicycles can safely co-exist on roads both urban and rural.

PrevGrow quickly. Live better.
Not a fork in the road as much as a spoon.Next